India Will Not Ban Bitcoin

The government of India has come to the end of its legal process regarding Bitcoin, following tax restrictions on cryptocurrency miners and investors. The Minister of Finance of India announced that he will not ban cryptocurrencies, in addition, the Central Bank of India is continuing its CBDC activities.

Petition Written to the Central Bank of France to Buy BTC

A French Member of Parliament signed a petition to allow the Central Bank of France to buy and hold Bitcoin and other cryptocurrencies. The purpose of the petition is to support the financial development of France with cryptocurrencies with the support of lawmakers.

Former White House Employee Says US May Get ETF Approval

Skybridge Capital hedge fund co-founder and former White House employee Anthony Scaramucci said if Gary Gensler was elected president of the US Securities and Exchange Commission this year, a US-approved Bitcoin ETF could be seen by the end of this year.

Ethereum creator Vitalik Buterin stated that the Optimism update will soon launch its mainnet and the scaling potential of Ethereum will increase by a factor of 100.

Kessler Collection, a top class hotel chain based in the US, announced that it will accept cryptocurrency payments. The company stated in a statement that they believe in cryptocurrencies.

Brink, the non-profit development organization that protects the Bitcoin protocol, received a $ 150,000 donation from Nexo after Jack Dorsey donated 1 BTC to the organization.

SEC Asks for a Breakdown of Ripple Founders' Personal Spending

The U.S. Securities Commission (SEC) has requested to find out about the personal expenses of the Ripple company's founders. Seeking eight banks to provide financial transaction breakdowns, the SEC wants to see Ripple founders up to their grocery shopping.

Bitcoin broke a record at $ 61,750 over the weekend. Checks for the $ 1.9 trillion aid package passed by the Biden government began to be distributed over the weekend. We will definitely see the effects of the aid checks. MicroStrategy's addition of 262 BTC to its assets on Friday and the SEC approval of JP Morgan's direct and indirect crypto-based debt instrument could launch the institutional FOMO. We have mentioned that in order for Bitcoin to achieve a healthy and permanent rise, its high volatility must decrease. Volatility, which was 101% at the point we reached, declined to 66% and investor appetite started to spread over a longer term. "Profit suits the pocket." We can see shifts from strategy to longer term purchases. There was no decrease in the amount of positions that were in profit and not closed at $ 61,500. In summary, investors did not close their positions with the expectation that it could rise further.

When we look at BTC / USD technically, the upper band of the bullish channel has exceeded $ 60,500, but although there is no hold for now, both the uptrend has passed and the previous high level of $ 58,400 is our intraday support. In the current outlook, the uptrend continues as the $ 60,500 and $ 61,750 levels will be followed as resistance. The outlook is positive and positive. 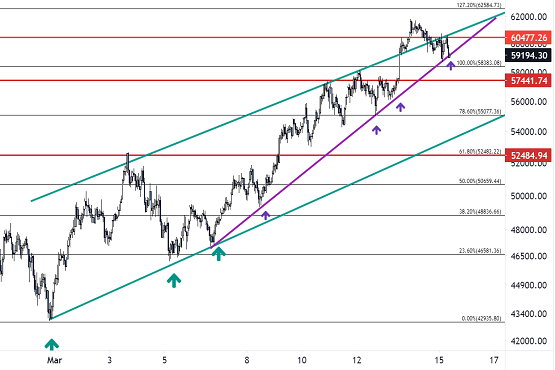 Ethereum is trading this morning with a loss close to 2% at the $ 1805 level. Although Bitcoin broke a record, Ethereum's failure to keep up with it stems from the news that miners will exit the system and launch an attack on April 1, which will take 55 hours, despite the EIP-1559 improvement, which will lower network fees. However, as the blockchain base will not be affected by such an attack, this will only be in the form of protest and may cause Ethereum prices to hang.

When we consider ETH / USD technically, horizontal movements continue in the bullish channel. The channel subband traverses the $ 1750 level. However, the MACD is still negative and weak for 4 hours. For this reason, it is useful to focus on the support levels in Ethereum rather than the intermediate levels. The outlook is weak for now but is in an uptrend. 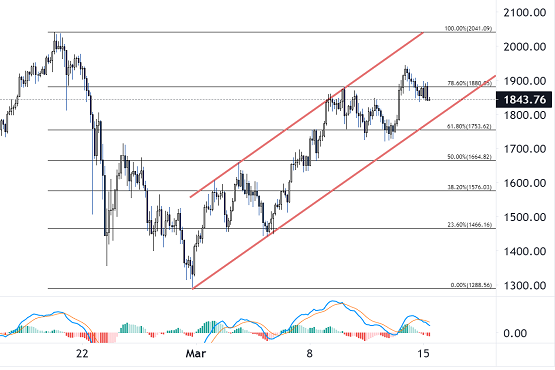 The AVAX / USD pair is trading at $ 28.70 this morning with a 0.6% retracement. The consolidation between the $ 28.80-35.00 levels is not yet over. However, as the $ 28.80 level serves as support, it is in the position to react. On the other hand, in the 3-hour period, oscillators are also about to reach the oversold zone. Although this gives some weaker trading signals, the discounted pricing created by oversold may attract attention for AVAX. Thus, we can witness the positive signals of oscillators returning from the bottom levels. The outlook for AVAX is horizontal but positive as sales are ending and time wasted there. 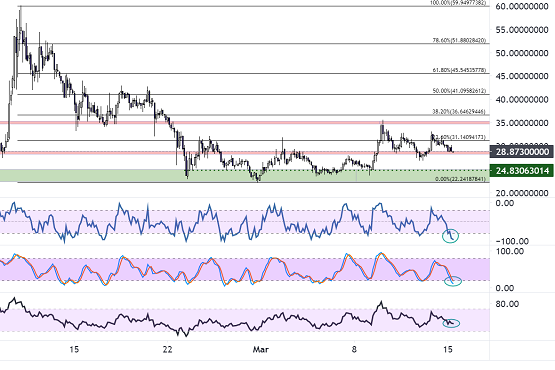 Ripple is pricing sideways from the $ 0.44 level this morning. Letters between the SEC and Ripple are sent to the New York prosecutor's office, allowing investors to follow the developments personally. In the last defense letter sent by the prosecutor's office, it was insisted that XRP is clearly a "security". Due to Gary Gensler's crypto-fondness, XRP investors believe the lawsuit will be positive. But no sign of the positive attitude led by the Gensler is yet to be seen. On the other hand, the fact that the SEC's latest announcement requires a detailed report up to the personal expenses of Ripple partners is another indicator of how serious the situation is on the SEC side. Although Ripple is implementing a strong defense strategy, the tough stance shown by the US is creating weakness in pricing for now.

When the XRP / USD parity is examined technically in a 3-hour period, it is seen that the pricing is located on the channel middle band of $ 0.44. If the $ 0.44 strong support level and this is the reaction zone for the pair, the $ 0.46 intermediate resistance could be tested, followed by the $ 0.49 channel upper band. Williams% R, Stochastik, RSI oscillators on the verge of returning from the lows, signaling an upside. This signals the reaction from the support level for the pair. The channel upper band passes through 0.4790. 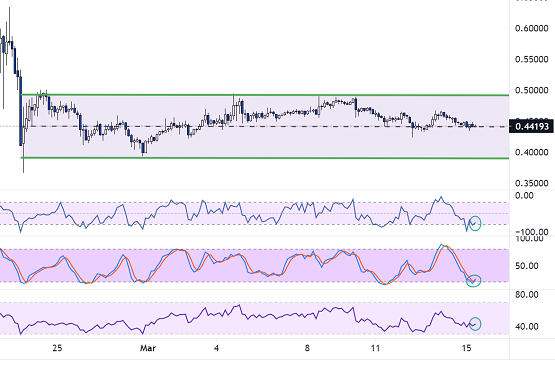 Litecoin is priced at $ 212 this morning, with a horizontal change. The test version of the MimbleWimble update will be tested on March 15 (today). When the first signals of this update were given, we witnessed an increase in demand for LTC, after which time passed caused this news to lose its effect. However, if the test phase is successful and the update provides sufficient functionality, we can witness positive pricing of this situation. Movements can accelerate in LTC, which is currently 40% away from the all-time high.

If the LTC / USD pair is technically examined, the pair tested the $ 230 resistance, but the activation of the sellers brought a retreat to the $ 212 zone after this level. The $ 205 strong support level and will serve as the first support in the continuation of the pullback. The possible reaction purchases from here may open the way for the pair up to the upper band of the channel at $ 255. This means a 25% potential. 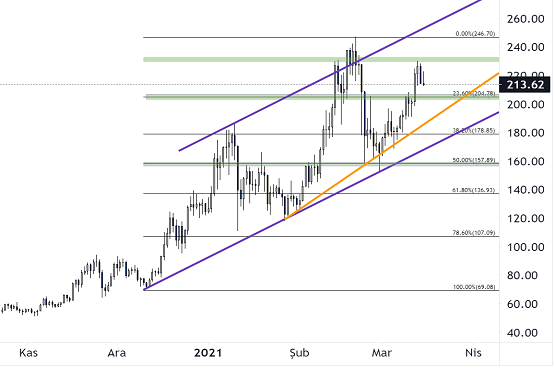 Chainlink serves as a platform for smart contracts and can offer oracle (bridge) functionality sought in actions such as the development and distribution of NFT tokens, which has become increasingly popular in recent times due to its ability to create numerous tokens on it. For this reason, it is possible for the NFT market to gain value in parallel with Chainlink after a certain point. On the other hand, the chain data of the pair also gives positive signals. The number of LINK protected by withdrawing from exchanges to cold wallets is at the highest level in the last month.

When we examine the LINK / USD parity technically, it is seen that the pricing is above the $ 28.00 channel lower band. Previously, the reaction over this level resulted in a 40% increase. Therefore, the responses above $ 38.00 can be expected to be strong. The $ 29.00 initial resistance and then the $ 32.00 zone, the mid-channel, may come into play. 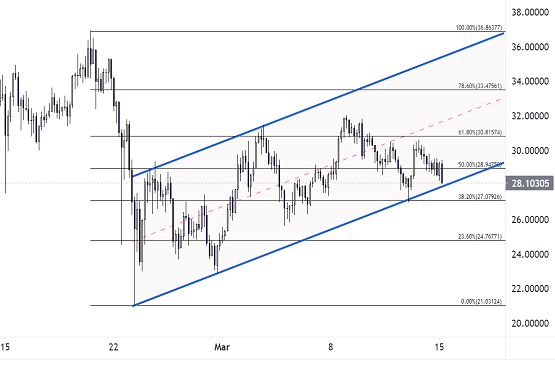 The BAT / USD pair is currently retreating by 2.7%, pricing in the $ 0.75 region. The pair's failure to cross the $ 0.79 confirmation line on March 12 caused the flag formation to disapprove. Then, the weak course accompanied by the downward break of the $ 0.76 uptrend strengthened the selling pressures. Although the reactions from the $ 0.72 zone bring along 19% gains, the trend with sellers seems to be more dominant for now. As the $ 0.71 Fibonacci retracement is the starting zone, we can qualify this level as a strong support zone. It will then be an initial response target of $ 0.79. Our main uptrend continues, passing the $ 0.65 level. 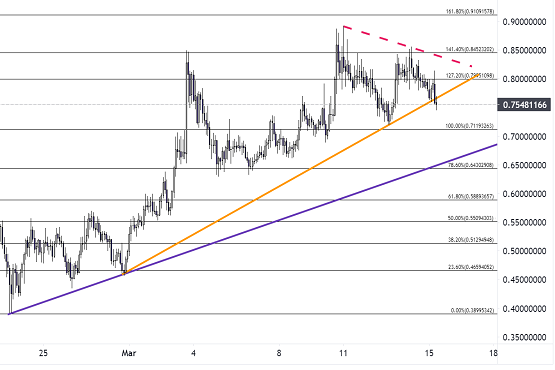