According to a report released this week, looking at the data for the first half of the year, it was announced that institutional investors, including hedge funds, trust funds and companies, thought that ETH could be as effective as BTC in the long run and added ETH for the first time or more to their portfolios.

US Senator Cynthia Lummis said that inflation and massive government spending are accelerating the adoption of digital assets. “We want to make sure that Bitcoin can continue to serve as a good store of value,” Lummis said. she said and stated that she saw Bitcoin in this way.

While global payment platform PayPal plans to provide cryptocurrency trading services for its customers in the UK, it has been suggested that DeFi integration may be in the application.

MicroStrateji Is Satisfied With Its Digital Asset Investments

In its second quarter earnings announcement on Thursday, MicroStrateji stated that it is satisfied with its digital asset investment strategy and will continue to invest in digital assets (BTC).

Bitcoin, which is horizontal in the morning hours, is priced at $ 39,900. When we analyze the chain data of Bitcoin, it is seen that the amount of Bitcoin reserves held in the exchanges reached its lowest levels as of August 2018. The decrease in the amount of reserves in the stock markets minimizes the pressure on the selling side, while at the same time, it shows that the confidence of the investors in the market in the long run is renewed.

When we consider the BTC/USDT parity technically, BTC, which continues its price movement within the horizontal channel that existed as of May 23, continues to be priced close to the upper band of the channel ($ 40,900). When we examine BTC, which has been moving horizontally just below the upper band of the channel for about 3 days, in a 4-hour period, it is seen that a sell signal comes from the MACD. As of July 20, $40,900 will be retested unless there is a 4-hour close below $39,400, which coincides with the existing minor ascending trend. With the breakout, it is expected to see rises towards the $42,000-43,000 band. 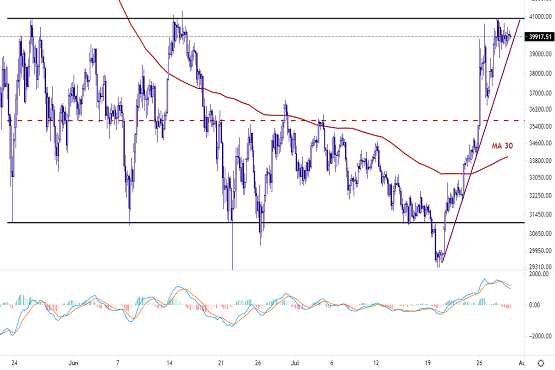 Ethereum, which gained about 1.4 percent in the morning hours, is priced at $ 2414. When the chain data for Ethereum is examined, the amount of ETH held on the exchanges continues to decrease as of August 2020. Looking at the current figures, it has reached its lowest level as of November 2018. As in Bitcoin, this situation will reduce the general selling pressure and cause an accelerating effect in the upward direction with the expected demand for ETH.

When we consider the ETH/USDT parity technically, it is seen that the day closings have been positive for the past 9 days. When we look at the trading volumes, although there has been a decrease in the last few days, there is usually a trading volume close to or above the average. Testing the $2439.75 level, which is the Fibo'38.20 tranche, with the daily candle opening today, ETH has seen a reaction from this level, but it is limited for now. When we examine it in the 4-hour period, we see that the MACD has a buy signal again. If the $2439 level is broken to the upside and a daily close occurs, the next target is $2727. 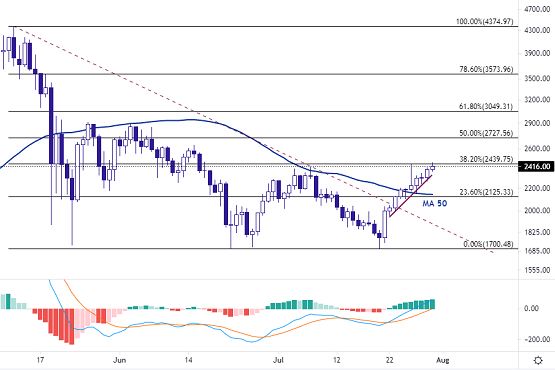 AVAX, which gained about 1 percent in the morning hours, is priced at $12.54. When we examine the AVAX/USDT parity technically, AVAX, which has been moving in the rising channel for about 10 days, has been priced between the channel route band and the lower band for the last few days. AVAX, which reached the first price target of $ 12.70, which we stated in the bulletin yesterday, received a reaction from this level and experienced a slight pullback. MACD maintains buy signal. We are updating our next price target from 13.50 to $13.75 unless AVAX breaks the channel lower band to the downside. 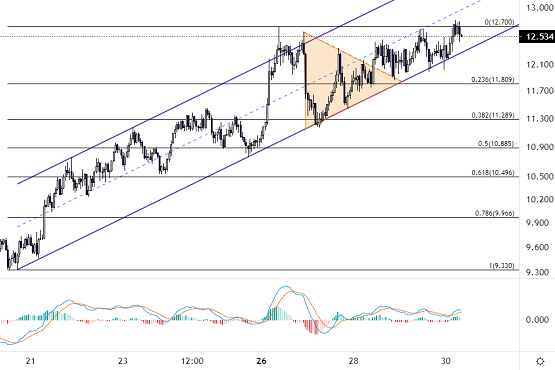 When we look at the XRP/USDT parity technically in the daily period, we see that it tried to break the resistance in the $ 0.760-0.768 band upwards, but could not find a place above these levels. If the resistance at these levels can be sustained in the 4-hour period, it will be possible for the price to move towards the $0.80 levels. In case of a general pullback in the market or a negative news flow specific to Ripple, we expect the weekly DEMA, which coincides with the $0.73 levels, to act as the closest support level. If this support is lost, further selling towards the $0.70 levels can be expected. In the short term, buying near support and selling near resistance may be a healthier strategy. 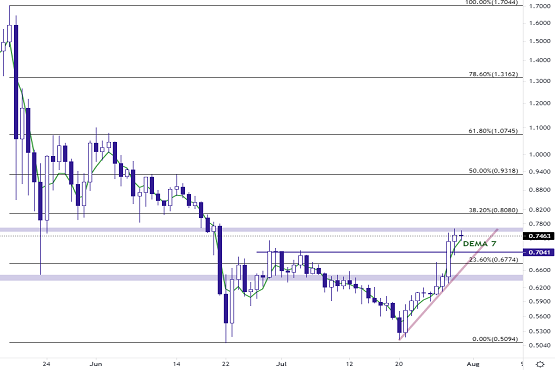 Litecoin, which followed a sideways course in the morning hours, is priced at $142. When we analyze the chain data of Litecoin, we see that there was a decrease in the number of active and new addresses on July 29. It is possible to say that the interest of investors in Litecoin was limited due to the mixed course in the market yesterday.

When we consider the LTC/USDT parity technically in the 4-hour period, it has been in an upward trend since July 21. Although it tried to break the resistance at $143 upwards at night, LTC, which could not sustain above these levels in the 4-hour period, is retreating a little as of the morning hours. Staying above the resistance at $143 could accelerate the price move towards the starting point of the Fibonacci one at $149. On the other hand, if the pullback continues, we expect the $140 levels, which coincide with the uptrend, to act as the closest support level. If this support is lost, a pullback towards the $136-137 band (Fibo'23.60 correction) can be seen. The MACD has again formed a “buy” signal for LTC in the 4-hour period. 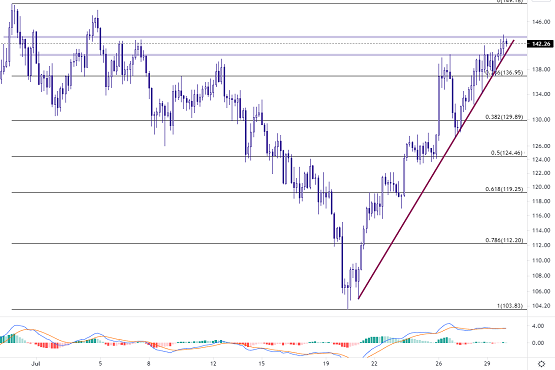 LINK, which gained 3.5 percent in the morning hours, is priced at $20.06. When we look at the LINK/USDT pair technically, we see that it tried to break the resistance at $20.06 in the morning. If it holds above this resistance in the 4-hour period, we can expect the price to move towards the $21.35 levels and then the $22.64 levels. On the other hand, we consider the $18.52 levels, which coincides with the Fibo'23.60 retracement level, as the closest support level to follow in case of possible pullbacks. If this support at $18.52 is lost, a pullback to $16.30, which coincides with the monthly DEMA levels, can be seen. In the short term, buying near support and selling near resistance will be a healthier strategy. MACD maintains its “buy” signal for LINK. 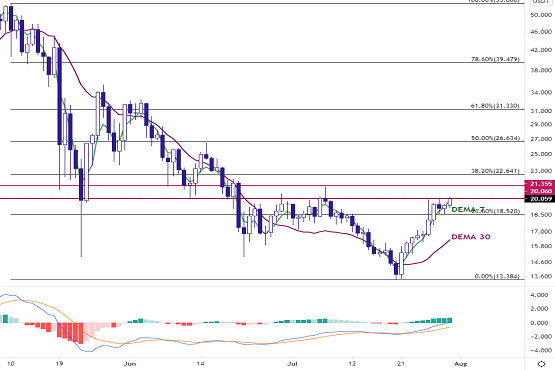 BAT, which gained about 2.8 percent in the morning hours, is priced at $ 0.612. When we examine the BAT/USDT pair technically in the 4-hour period, we see an acceleration in the price movement in the bullish direction, with it holding above its 30-day moving average ($ 0.549). BAT, which broke the resistance level at $ 0.60 with the opening of the daily candle, made its 4-hour close above this level. We expect this level to act as support on pullbacks for BAT. The next target is located at the $0.64 level, which coincides with the channel upper band. 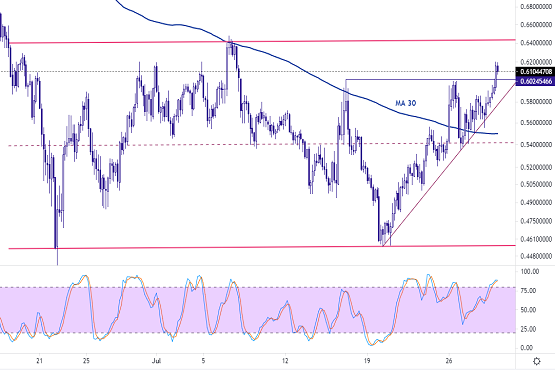