Institutions Are Buying Bitcoin As Early as 2020

While interest in cryptocurrency tools such as the Grayscale Bitcoin Trust (GBTC) fund is growing again, figures show that the big players actually increased their BTC assets during the downturn.

Looking at the trading volumes of the foreign cryptocurrency exchange, where institutional investors mainly trade, Ether was the most traded cryptocurrency in the second quarter of the year and outstverted Bitcoin with increased interest in decentralized finance and staking transactions.

In a letter to Senator Elizabeth Warren, Chairman of the Securities and Exchange Commission Gary Gensler warned that investors were not adequately protected in cryptocurrency markets and said they should have more regulatory authority.

Metromil Buys Bitcoin in First Half of 2021

The company added $1 million in BTC to its balance sheet in the first half of 2021, according to the SEC filing of Nasdaq-listed car insurance company Metromil.

Neuberger Berman, which has more than $400 billion in assets under management, is preparing to offer Bitcoin and Ethereum services to its customers, according to its application to the SEC.

Stock tokens and digital assets associated with Proof-of-Stake blockchain networks have outperformed the market since the end of 2019, while privacy-oriented digital tokens have underperformed, Goldman Sachs said in a new report.

Bitcoin, which gained about 0.9 percent in the morning, is priced at $45,994. With the recovery across cryptocurrency markets, positive news flow continues in bitcoin. The company added $1 million in BTC to its balance sheet in the first half of 2021, according to an SEC filing from Nasdaq-listed car insurance company Metromil, according to an intraday news feed yesterday. Although the amount is low, the addition of BTC to the balance sheets of different companies increases the confidence in the market and will have a positive effect on prices as well as in the long term. Neuberger Berman, which also has more than $400 billion in assets under management, is preparing to offer Bitcoin and Ethereum services to its customers. This is news that will bring new money to the market.

When we consider BTC/USDT parity technically, BTC continues to move prices in the remaining rising as of July 20, still priced above the $45115 level, which corresponds to its 200-day moving average. When we examine it in a 4-hour period, macd has been maintaining the sell signal for about 2 days. BtC, which was valued at about 60% as of July 20th, has lost momentum. If the 200-day moving average breaks downwards in BTC, which has a double peak formation of $46750, there may be retreats towards Fibo'23.60 and the double peak target of $42650. 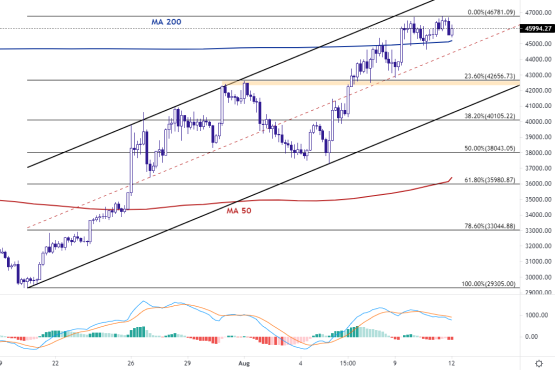 Ethereum, which gained about 1.7 percent in the morning, is priced at $3208. ETH, which has attracted attention both with its performance and with its successful London hard fork process recently, was the most traded cryptocurrency in the second quarter of the year when looking at the trading volumes of the foreign cryptocurrency exchange, which is predominantly traded by institutional investors, and with the increase in interest in decentralized finance and stake transactions, bitcoin has been put ahead. While the medium-term and long-term outlook for Ethereum is positive, short-term withdrawals can be seen.

When we consider the ETH/USDT parity technically, ETH continued to move in price within the rising channel for about 24 days, providing a 92% return to its investor in the process.When we examined it in the 4-hour period, the sell signal from MACD on August 8th remains valid. ETH, which performed well intraday yesterday, had a retreat of about 3% to the daily close and its intraday gains were limited to 0.60%. If the pullback continues at ETH, which has fallen below the $3238 level that corresponds to the channel mid band with this withdrawal, we expect it to find support at the level of $3050, which corresponds to the channel sub-band and Fibo'61.80. 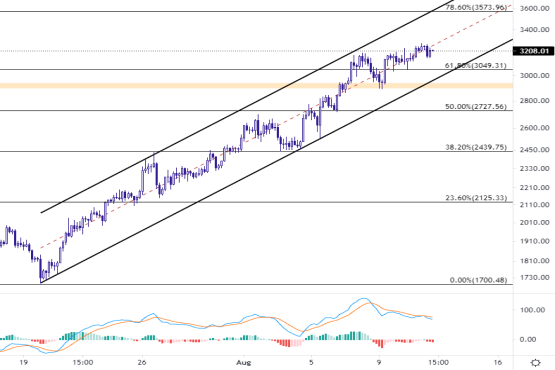 AVAX, which gained about 2.3 percent in the morning, is priced at $17.14. When we technically examined the AVAX/USDT pair, AVAX continued its price movement within the existing rising channel as of July 20, breaking the level of 16.85, which corresponds to fibo'38.20 with the first 4-hour candle this morning, and closed above this level. When we examine it over a 4-hour period, there is a negative discrepancy in MACD in AVAX, which is again resistant at $17.50, which corresponds to the upper band of the channel. Given these, short-term withdrawals can be expected for AVAX. The first support point is the $16 level, which corresponds to the channel middle band. If this level breaks downwards, we expect it to work with the channel sub-band as support. 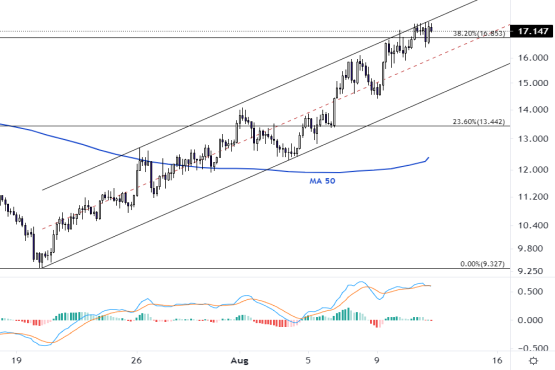 The XRP, which appears to be dominated by horizontal price movement in the morning, is priced at $1.0065. XRP/USDT has risen sharply, with the positive news flow prevailing in the process, which has held above and supported the 200-day moving average. XRP, which yesterday broke the channel mid band ($0.877) with above-average trading volumes and the channel upper band (0.98), rose to $1.09. If XRP starts to be priced in the channel again intraday, it may experience a retreat to the channel middle band, as well as to the fibo'23.60 tranche of $0.939. 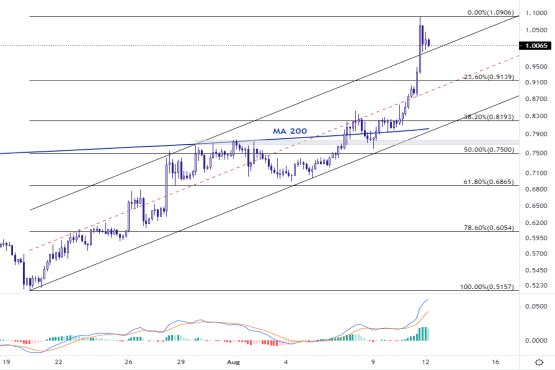 LtC, which gained about 1.9 percent in the morning, is priced at $173.51. When we consider ltc/USDT parity in technical terms, LTC continues to move in price movement within the channel that rose as of July 20th in a 4-hour period, and has been moving in the direction of rising at levels close to the channel upper band for the last 3 days. LTC, which yesterday broke the channel top band with the sharp rises I had in the market, as well as the level of $176.9, which also corresponds to fibo'23.60, could not hold above this level and started to be priced in the channel again. MACD continues to receive over a four-hour period. If LTC closes at $177 for four hours, the rises may continue, but if it continues to be priced within the channel, there may be retreats towards the channel sub-band, which is at $160 to generate demand again. 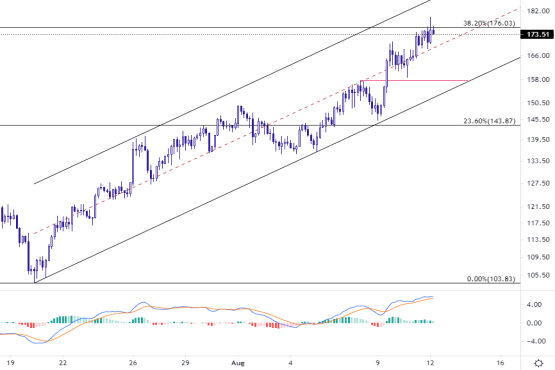 LINK, which gained about 1.1 percent in the morning, is priced at $26.21. When we examined the LINK/USDT parity in a technically 1-day period, LINK rose towards $27.85, which coincided with its 200-day moving average with sharp rises yesterday, reaching $27.31. LINK, which has not been able to maintain above the important resistance level of $26.41 that we have been following for a long time, resisted again today. he tested his level from below and received a reaction. Although macd retains the receive signal during the daily period, there are signs of decline in short-term metrics. The major support level for withdrawals is Fibo'23.60 tranche of $22.79. 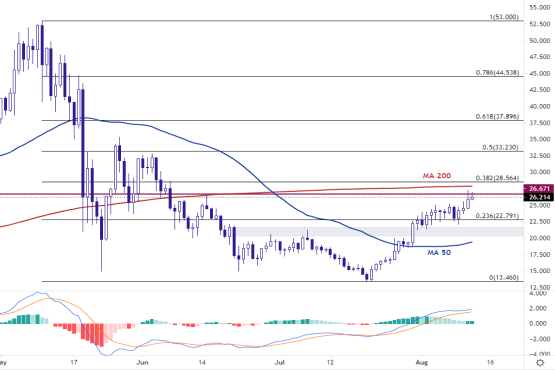 Bat, which gained about 0.60 percent in the morning, is priced at $0.749. When we consider bat/USDT parity technically, BAT, which has been moving prices within the existing rising channel as of July 20, has risen to $0.77, which corresponds to our target level of the channel mid band, which we mentioned in the bulletin yesterday, and has experienced a retreat from this level with resistance. When we examine it in a 4-hour period, while macd makes falling hills, the price rises have formed. There may be withdrawals for BAT, where negative mismatch is seen. The august 1 peak of $0.723 is the provincial support level, but with the breakout, we expect a price movement towards $0.69. 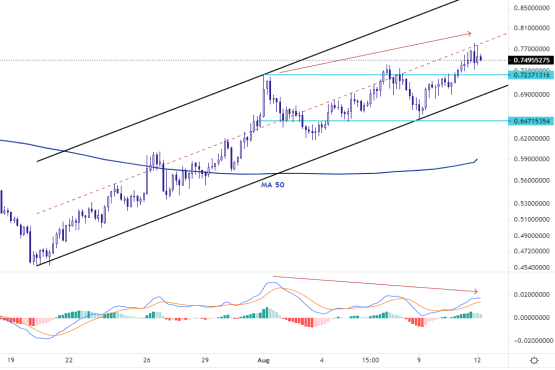