Interest in Ethereum is Growing

One of the largest cryptocurrency exchanges in the USA stated that institutional and large investors are heavily buying Ethereum. According to the statements of the exchange, with Bitcoin, Ethereum has now started to attract corporate interest and investors have started to spend large capital.

Nasdaq Listed Company Receives $ 150 Million Bitcoin
The company named Marathon Patent Group, which produces Bitcoin mining machines, listed on Nasdaq, announced that it has invested 150 million dollars in BTC. "Similar to other forward-thinking companies like MicroStrategy, we believe that keeping some of our treasury reserves in Bitcoin will be a longer-term strategy than holding US dollars," the company said. made the explanation.

The JP Morgan analyst cited some reasons for BTC to be included in the investor portfolio. The analyst explained that low-interest US bonds pushed investors to alternative investments. The analyst also stated that high returns and moderate correlations in cryptocurrencies continue to increase portfolio efficiency.

It was learned that the largest university donation funds in the US quietly bought crypto money last year. Universities include Harvard, Yale Brown and the University of Michigan and several other colleges.

Blockchain Use in Vaccination Data Begins

The International Air Transport Association is developing blockchain-based passports that contain the COVID-19 test case of each passenger. The explanations made are that this superior technology will be applied successfully in all areas of life.

Cryptocurrency are starting the day in a horizontal view this morning in line with the general risk appetite. The fact that the pandemic conditions revised down the growth expectations has negatively affected the risk appetite to some extent. This morning, Bitcoin is pricing at $ 31,900 with a horizontal change. The news of corporate buyers at the level of 30 thousand dollars for the last three days shows that positive opinions continue in terms of the market. MicroStrategy and Marathon's BTC purchases were announced. Yesterday, we talked about the SOPR ratio in our ICRYPEX Analysis Twitter account and mentioned that it reached the lowest level in three months with the value approaching 1 and signaled for upward movements. Although it fell below the value of 1 in the altcoin season before, this indicator cannot stay below 1 for a long time. Therefore, it may constitute a good indicator for BTC in the upcoming period.

When we look at BTC / USD technically, the pricing from the $ 28,700 level, which was the lowest level tested the previous day, points to recovering lows. Because at these bottoms, although the oscillators started to turn upwards hourly, they did not approve in a four-hour period. Therefore, approval must be obtained between periods in the continuation of the reactions. Otherwise, there may be a weakness in reactions towards $ 33,000. The appearance is horizontal and in an effort to hold on to the bottom. 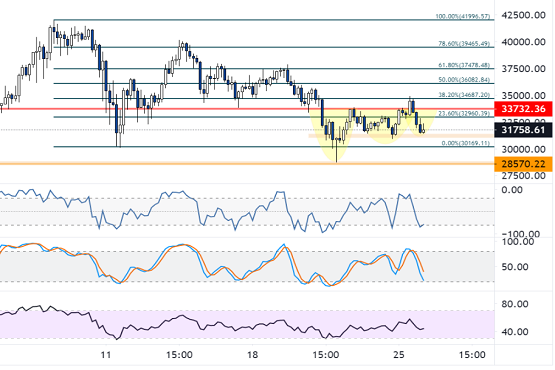 After Ethereum tested the $ 1480 level the previous day, an outlook not supported by volume and the enthusiasm of sales at the Grayscale fund, investors increased their profit taking appetite at ETH around the peak. In addition, the 1-week-month ETH supply rising to the highest level of the last two years indicates that the market does not want to stay with high-cost ETH, probably due to the expectation that there will be a return or profit realization in ETH. On the other hand, another metric that makes the expectation that ETH will not be able to hold on to its peak at the $ 1480 level is the adjusted transaction volume, which is only made up of successful transactions, also showed a decrease in contrast to the peaks. For this reason, the situation in ETH is in an upward trend, but the record holding signs are not quantitative.

When we consider ETH / USD technically; Movements continue within the rising channel. When we draw in-channel Fibo; 1280 $ '61 corresponds to 8 tranches, and $ 1240 corresponds to the '50 slice, which is the middle band of the channel. Both the volume and the MACD give negative mismatches, and generally mismatches are broken towards the indicator. Therefore, the indicators signal that some further withdrawal may occur. Therefore, it may be necessary to pay attention to Fibo levels. Although profit sales are coming, the outlook is still up. 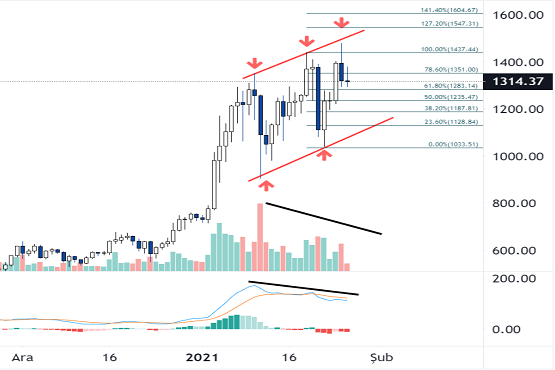 Avalance is pricing at $ 12.00 this morning, down 1.7% against the dollar. We see that profit purchases are at the forefront today for the crypto money market. In case of falling below the level of $ 11.10, the double peak formation may be completed and a downward break may be realized. In addition, the double hill continues its formation accompanied by the descending channel. However, technical analysis that is not supported by macro indicators as we always emphasize is not healthy. Therefore, withdrawals may be weaker for AVAX, which has recently resonated with its project. Still, profit sales may be possible in the short term for the price below the $ 11.10 level. The descending channel and the double high may bring up $ 8.50 levels. 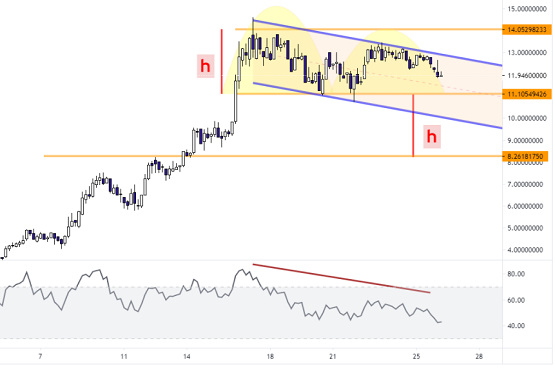 The XRP / USD pair is pricing up 0.2% at $ 0.26 in the morning. With the increasing interest in cryptocurrencies around the world, investors want to be included in the cryptocurrency train they think they missed, cheaply and with a high profit margin. Although it is one of the most striking cryptocurrencies after Ripple's sharp decline, the lawsuit with the SEC still continues its risk effect as the agenda topic for Ripple. For XRP, which continues to be involved in crypto money startups created in many places around the world, the situation in the US leg still does not turn to the positive side, although 95% of investors are not US citizens, according to the company statement. You can take a look at our short publication on the Ripple case, with ICRYPEX Board Member Tuncay Yıldıran, which evaluates the process we carried out the previous day.

When we examine the XRP / USD parity from a technical point of view, it is seen that the double bottom image does not confirm and the market moves horizontally. On the other hand, even though prices holding above $ 0.25 give the bottom view of a recovery, XRP will be in a squeeze unless it moves up. Horizontal trading continues in the tightness area at the level of Fibo'61.8 at 0.2450 and resistance at $ 0.27. 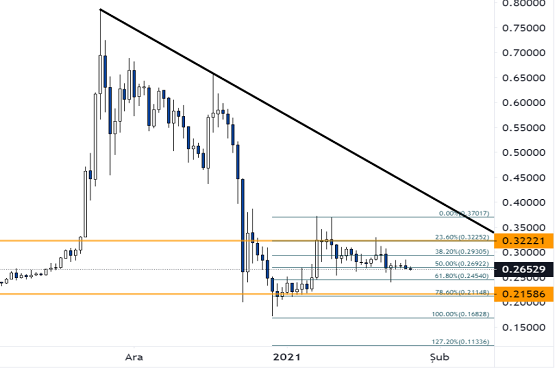 Litecoin is losing some value this morning, in an outlook in line with the general cryptocurrency market. While the change was down 2% compared to the previous day, Litecoin remained in the background on a return basis for a while contrary to the general market. Although it is currently among the coins expected to move the most due to this underdeveloped outlook, its hold on time basis may undermine investor confidence. Although it is not a situation that will negatively affect it fundamentally, it does not adapt to general market movements but is affected by downward movements, although we like LTC, it provides a negative image.

When we take the LTC / USD technically, there is some weakness today, although the recovery from the lows has become significantly evident after the $ 110 level it tested on January 11 and created a minor trend. With the effect of the decreasing trend, horizontalization continues in the range of $ 125-150. The Fibo'23.6 level retracement support in retracements crosses the $ 128 level. The look is somewhat weak and horizontal. 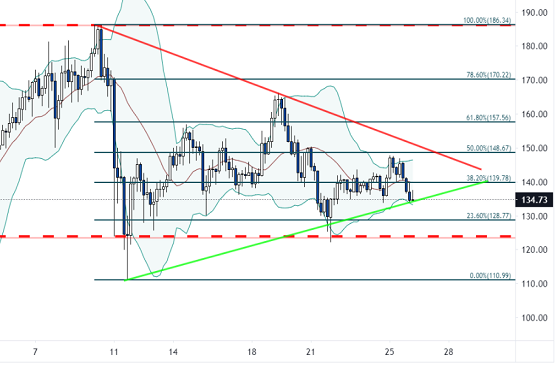 Chainlink is pricing around $ 23.00 this morning, down 2%. With Ethereum's return from its peak, LINK, like many DeFi tokens using the Ethereum consensus, experienced some retracement. During this period of profit taking increased at the peaks, the LINK / USD pair is trading 12% below its record high of $ 25.80.

When the LINK / USD parity is analyzed technically, it is observed that the middle band of the bullish channel that passed the level of $ 23.10 was broken down after the sales after the record. Although prices below this level may create a weaker outlook and bring the $ 22.25 levels to the agenda, it should not be forgotten that the price is within the boundaries of the bullish channel in general view. While the MACD is giving a weakening signal in the 4-hour period, the channel sub-band is passing at $ 21.10 levels. The outlook is in recovery but with some profit selling.

The BAT / USD pair is pricing around $ 0.29 this morning with a 3% retracement. Grayscale's application for funding for the Basic Attention Token was fueled by fundamentally positive news. On the technical view, it has a strong support at $ 0.27, even though it retreats before reaching its target of $ 0.37 after double bottom formation. Among the indicators, the MACD confirms the retractions along with the volume and gives a positive signal. Nevertheless, it is useful to be cautious in the days when market movements are downward. Given that institutional investors will be more interested from now on, BAT for the medium and long term may have a different look. 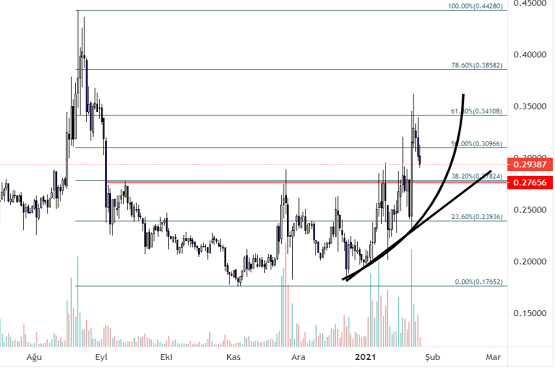