Investment in Cryptocurrencies is at a Record Level

According to CryptoQuant data, there were record-breaking exits in miner positions. Exits may not specifically indicate that miners are selling BTC. However, it shows that mined cryptocurrencies have moved to places where they would likely be part of a trade.

Galaxy Digital, an investment company with crypto assets of $ 815 million under its management, announced that it will establish an Ethereum fund that accepts a minimum investment of $ 25,000. Referring to the ETH-based DeFi platform, the company stated that Ethereum is a very good opportunity to invest.

Ripple CEO Garlinghouse published a new post and discussed the overall situation of the company. The article explained the positive effects following the SEC case, the new customers they gained. He emphasized that they have an incredible, durable team and strong projects for 2021 and beyond.

The total value locked in DeFi protocols is increasing day by day. Data from CoinGecko show that DeFi market value has reached $ 45 billion. While the amount locked on the DeFi platform was $ 15.6 billion at the beginning of 2021, it didn't take even a month to reach its current value of $ 25 billion. The intense interest shown paves the way for Ethereum's new peaks.

The Central Bank of the Philippines Bangko Sentral ng Pilipinas (BSP) has issued new guidelines to prevent money laundering. Under the directive, an authorization certificate and license are required for cryptocurrency exchanges to operate in the country. In addition, the central bank has the authority to determine the situation in suspicious activity or large amounts of transactions.

Bitcoin is trading with 2% sellers this morning, just behind $ 32,000. In BTC, many macro and technical factors started to clash between each other. Miner sales are not finished yet, on the other hand, the crypto coins, which are faced with many bureaucratic pressures, have been fluctuating with the statements of individuals and organizations such as Yellen and BoE since their peak of 40 thousand dollars. Nevertheless, we see that institutions are interested in BTC ETF and funds in the market. Since the beginning of the year, the largest digital fund asset companies have received $ 1.7 billion in funds, and 75% of them came when BTC declined to $ 34,000 in the process of returning to $ 40,000. Therefore, although more than 30 thousand interest continues, the agenda is negatively affected by the concerns of the impact of COVID on the economies and the rhetoric of cryptocurrencies.

When we consider the BTC / USD parity technically, the word “okay, continue” or $ 30,000 psychological support has never been more meaningful and important. XBT (BTC futures) points to a double top in the daily period. The XBT chart also has a gap in the $ 24,600 region. This whole unfavorable scenario could be put into action if the $ 30,700 - $ 30,000 level breaks down. However, in market instability, on the other hand, the CHOP indicator also started to decrease, indicating that the market fragility was decreasing towards $ 30,000 levels. Likewise, the record breaking of the stablecoin amount in the stock exchanges seriously supports the instability in the technique. A horizontal trading strategy is applied while the unstable and horizontal movement continues in the range of $ 32,500 with holding on supports of $ 30,700 - $ 30,800 in pullbacks. The view is horizontal and unstable. 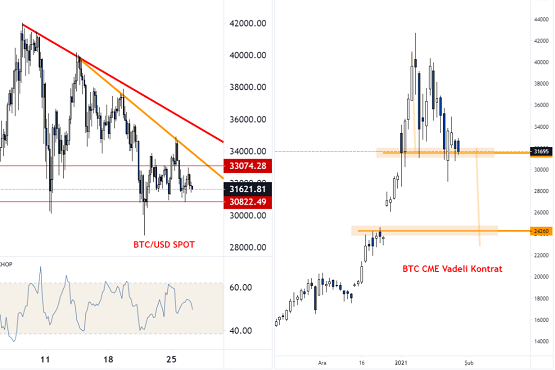 Although Ethereum has performed better than BTC in the past week, it has not been able to escape the 7% drop. This morning it is experiencing a 4% loss of just over $ 1300. Network fees are still higher in ETH. Prices are almost three times higher than October and November, causing the network not to be preferred. Active address numbers and wallets with a balance of 1000 ETH and more do not support ETH either. In this process, where the entire crypto money market is negatively affected under the leadership of Bitcoin, there is instability for ETH. In the "Berlin" update in the ETH 2.0 phase, 70% of the way has been reached. The faster the PoS process is passed, the easier the process will be for ETH prices. Don't miss the joint live stream of our Research and Treasury Departments on Ethereum, Polkadot, Avalanche and Algorand today.

When we consider ETH / USD technically, the transactions continue in an uptrend as a major. On the other hand, a secondary trend formation occurred in the direction of the descending channel as of January 25. MACD and volume indicators are showing negative mismatch with price peaks. The secondary channel, my descending channel, crosses the upper band at $ 1350, while the middle band is at $ 1285. The breaking of the middle band and the prices moving to the lower-middle band level is a sign of weakening price movements. Therefore, as a result of the break of the $ 1285 level, pressure may continue to the $ 1240 levels. 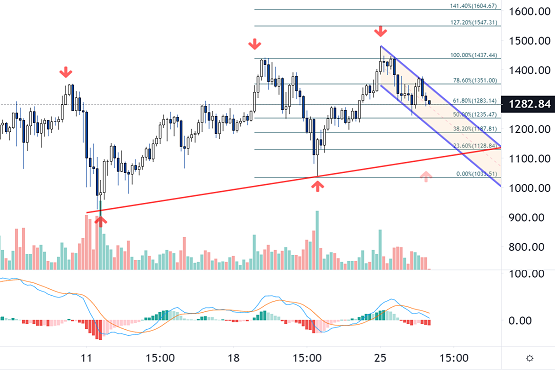 The AVAX / USD pair is priced around $ 12.00 this morning, with a 1.2% change. In the technical view, the $ 11.10 level should be broken down to complete the double top view. Since this break is incomplete, focusing on the double peak can be misleading. Therefore, we follow the descending channel. We see that the upper band of the channel has passed at $ 12.65 and this level cannot be broken. Unless this break is achieved, the pressure of the descending channel will continue and it will create a downward trend on the price. For now, the $ 11.65 - $ 12.65 zone is under consideration, the outlook is flat and the trend is weak. 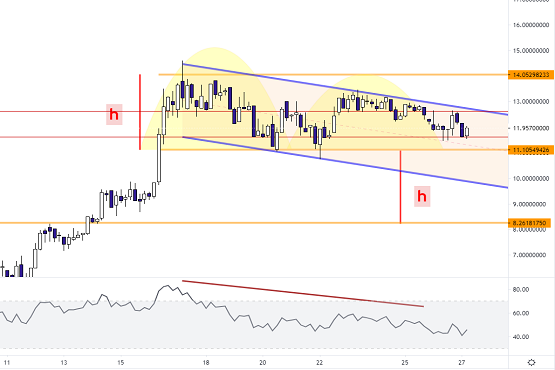 Ripple is pricing around $ 0.2630 this morning, down 2% against the dollar. In contrast to the still-calm XRP, on the other hand, the new statements by Garlinghouse, the CEO of Ripple, kept the agenda busy. In the statement made, it was emphasized that Ripple has formed a very strong team in all aspects and will sign successful projects for 2021. In the article, which also included comments on the SEC case, it was stated that there were some positive developments after the lawsuit and that Ripple customers increased. On the other hand, a Singapore-based cryptocurrency exchange announced that it has opened the XRP / USDC pair. Ripple is in an effort to expand its Asia operations.

When we consider the XRP / USD parity technically, it is seen that it is calm in the $ 0.21 - $ 0.32 band in January. When we look at the chart in shorter periods, descending peaks represent weakening prices. On the other hand, there is a great calmness and flatness in prices. The horizontal trading strategy continues in the range of $ 0.2590 - $ 0.28. The intermediate resistance is $ 0.2690, and for now, the buy from support, sell from resistance is followed within the scope of the horizontal trading strategy. 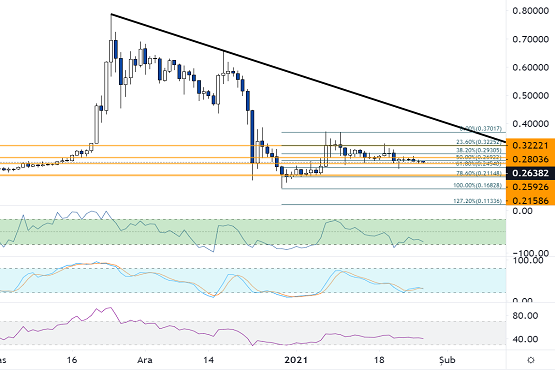 Although Litecoin is one of the crypto units that have made very strong breakthroughs in the last months of 2020, it draws attention with its horizontal course and being below the record level of $ 186 in the two-week period. LTC has been decoupled from both BTC and ETH movements for a while and has not been able to react to their rise, but has been one of the currencies most affected by the market's declines. Although the interest in Litecoin, which is the 8th largest crypto currency in this respect, has been faded for now, the BTC - LTC return gap has gradually opened and according to Litecoin's scissors analysis, a 20% return difference has occurred between BTC. In this case, although the positive wind creates an additional 20% chance for LTC, it will be important whether it will evaluate. Because in the current situation, it is obvious that the perception towards cryptocurrencies has weakened and there is no environment where LTC can go 20%.

If we interpret the LTC / USD parity in a technical sense, it is seen that the parity, which is priced at $ 130 with a decrease of 3% on a daily basis, is trying to maintain a persistence above $ 128 in the Fibo'23.60 tranche. The triangle shape it creates means that the price contracts / squeezes and these small movements are expected to turn into larger movements and increase the momentum of the price. Therefore, the momentum may increase if the movements above $ 145 - $ 146 are up. The Bollinger subband crosses the $ 128 level, which is the last support. Therefore, moving below $ 128 can be troublesome for LTC. The last support from here increases the chances of a reaction towards the $ 140 levels. 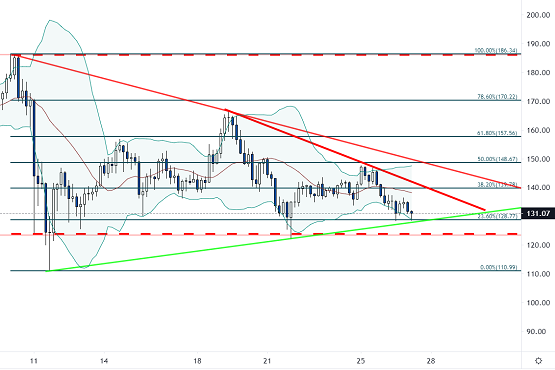 Chainlink is pricing down 4.5% at $ 22.00 this morning. LINK, which does not have a significant loss in the weekly returns chart, is following a flat and calm course, but on the other hand, it is still on the positive side of 76% in monthly returns. This slowdown after the record $ 25.80 corresponds to both the general mood in the market and the demand for profit taking. Altcoins also remained weak in the decline led by Bitcoin, and statements made on the bureaucracy wing spread fear of regulation on the market. While the altcoins on the DeFi platform are experiencing a rapid rise, LINK is slow on a weekly basis, but it should not be overlooked that it has high potential and the last two years of return champion.

When the LINK / USD parity is examined technically, the pair is in the bullish channel in general view, but after the sales that started on January 25, it was passed below the channel middle band at $ 23.50. We continue to stay in the weak zone of the channel. If the $ 23.40 - $ 23.60 levels cannot be broken in the upward reactions, LINK will "pull back" and touch the middle band and there will be a retreat. Subsequently, the $ 21.15 support at the Fibo'61.80 level may come to the fore. 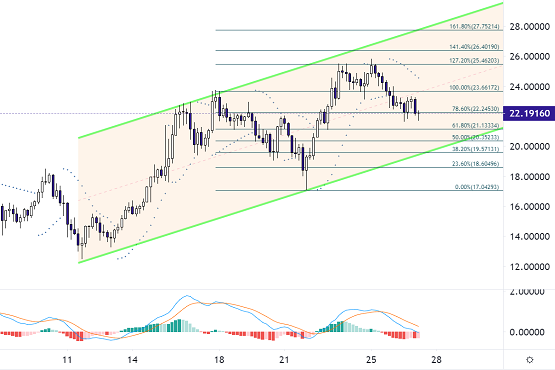 BAT / USD parity is priced around $ 0.2860 with a 4% change in the morning hours. Although it cannot get rid of the general declines led by BTC, it remains on the uptrend. The cryptocurrency, which has grown in popularity after Grayscale's application to establish a BAT fund, can better reflect this situation in its prices in the long run. Although we have witnessed the negative reflections of the cryptocurrency community in the short term, it is among the coins that make a strong exit in the medium to long term with almost 40% monthly return. On the technical view, the $ 0.2780 level above the Fibo'38.20 retracement is a strong support zone. Staying below this level may bring slower increases on the uptrend. For now, this has not been tested. When the price reaches this region, the supports that may occur can be evaluated in a short term. In contrast, a close zone should be set for loss because if it breaks down at $ 0.2780 there is no significant support up to the $ 0.24 level. 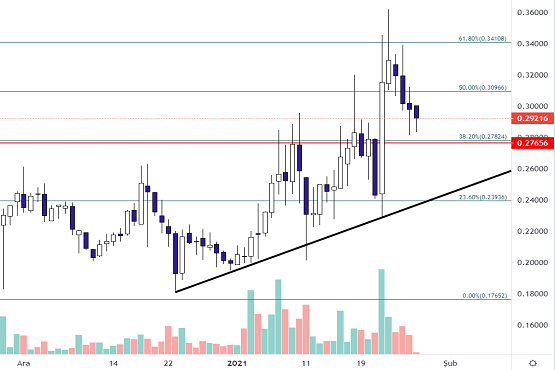