With Bitcoin breaking the all-time record on January 3, reaching 38,800, its market value rose to $ 638 billion. Thus, he placed 10th in the asset ranking and surpassed Ali Baba with a value of 630 billion dollars. There is only a $ 30 billion difference with Tesla.

No Bitcoin Left To Buy On The Netherlands-based Bitcoin Platform

While hundreds of Bitcoins can be easily traded on the Netherlands-based Bitcoin platform in the normal period, with the increasing demand for Bitcoin, stocks melted and no Bitcoin remained. Although the stocks were tried to be increased with the interventions made, the Bitcoin shortage started to show itself.

With Bitcoin multiplying its value on its 12th birthday, Satoshi Nakamoto, its creator, rose to 33rd place in the world's richest list. Assuming Satoshi is still alive, his fortune has reached $ 39.15 billion with Bitcoins in his hand.

As the price increase in Litecoin climbed above $ 150, the market value of cryptocurrency exceeded $ 10 billion, making Litecoin the 4th largest cryptocurrency in terms of market capitalization, replacing XRP in the ranking.

Market analysis company CTO announced in the chart it shared on Twitter that 1 million Bitcoins became illiquid this year. Stating that the total supply is 18.6 million, CTO emphasized that 3 million Bitcoins were also lost, and called for much less Bitcoin for us now.

The Number Of Ethereum-Holding Addresses Breaks A Record

According to the data published by Glossnode, the number of addresses holding Ethereum has increased steadily throughout the year, reaching 51,491,730. Considering that there were 34 million addresses in January, this number increased by approximately 48%.

Bitcoin tested the $ 34,820 level yesterday when it closed with $ 29,200 in 2020. Bitcoin's market cap has surpassed the world's leading banks, and nearly doubled the market value of JP Morgan. Bitcoin's volume has also hit an all-time record. However, the dominance of Bitcoin fell from 70% to 68%. This may cause the interest to shift from BTC to altcoins. In such a case, it can be expected that Bitcoin will consolidate after its record.

When we consider BTC / USD technically; We use Fibonacci levels for possible corrections due to dominance in addition to the parabolic trend. While the start of the movie is $ 17,500, possible retracements in the Fibo levels that we extended to the top are past $ 30,750, which corresponds to the 23.6% retracement level. For this reason, it is useful to stay away from purchases close to resistance and to focus on other parties rather than Bitcoin before the possible correction ends. Although the trend is on the rise, we think that there may be a correction in the short term according to the volatility of 2.5% we calculated daily. 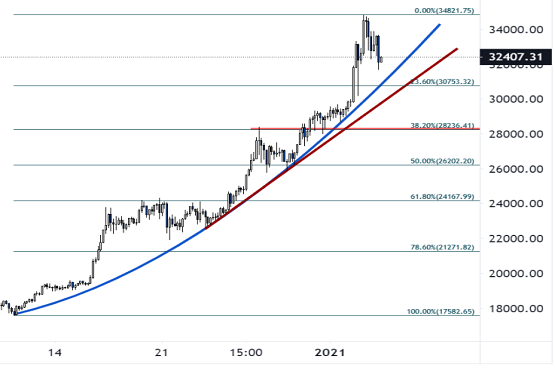 Ethereum took action in the past day, increasing its daily earnings up to 25%, and after almost 3 years back to $ 1000. At Ethereum last week, we said that pricing for 2.0 started at $ 700. However, Bitcoin may have initially triggered such rapid movement. So much so that Ethereum, which completed last year with a gain of $ 470%, tripled Bitcoin in weekly returns and approached 45%. While the money locked in DeFi's is approaching $ 18 billion, tokens using the Ethereum consensus lead the list.

When we consider ETH / USD technically, the trend in ETH, which has retreated to $ 1000 after a very rapid transition in the $ 700-1000 range, continues parabolically. A correction can be expected in the continuation of the rapid rise, but the main support is trailing at $ 880, 15% behind. For this reason, instead of purchases close to resistances, gradual transactions may be more appropriate. 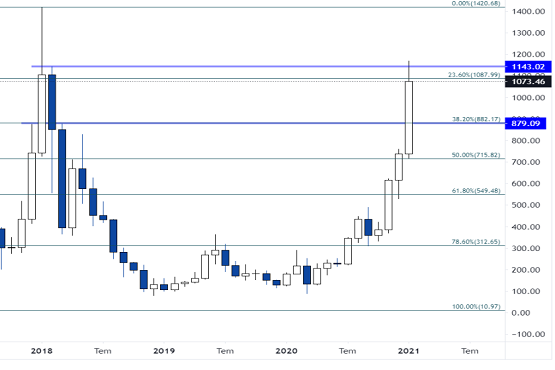 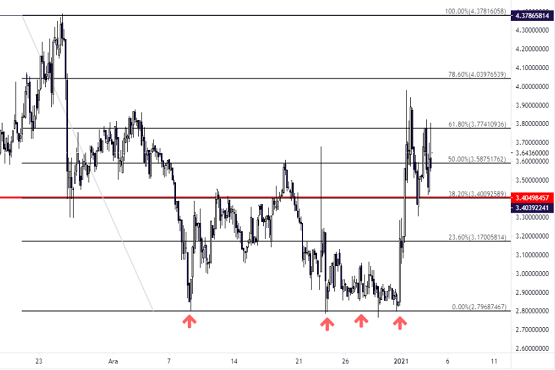 The XRP / USD pair is priced around $ 0.24, up 10% on a daily basis in the morning hours. Expectations are still not more positive for XRP, which has lost a high amount of monthly losses after the worst scenario and delist news. Looking at the weekly returns, we see that most of the altcoins are on the rise with the increasing demand for the cryptocurrency community, but XRP is the only altcoin with a 0% return almost not getting a share of it. It seems difficult to ensure the permanence of the bullish reactions for the parity, which continues its course around the 0.22 band.

When we consider the XRP / USD pair technically, we see that it reacts at $ 0.17. However, this reaction is not expected to create a bullish trend. Although there are small short-term movements, the XRP / USD pair continues to exhibit its weak stance. Still, pricing at $ 0.27, the Fibo'78.60 correction, may come into question in possible upside reactions. Developments in the parity, which continues its weak course, will be followed closely. 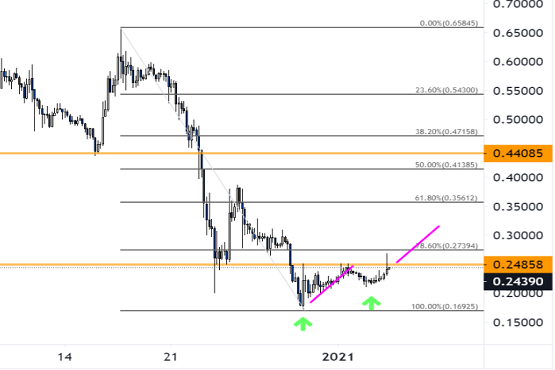 Litecoin has grown by 6% on the first day of the new year, and as of January 2, it has jumped by almost 40% and is currently priced at around $ 171. With a very high correlation with Bitcoin, the LTC / USD parity has even surpassed the major upward channel with the increase in demand due to the rapid Bitcoin rise experienced recently. With its attack, it left behind XRP and became the 4th most valuable crypto currency.

When we examine the LTC / USD parity technically, it broke the upper band ($ 150 level) of the bullish channel that it started in mid-December, and it made a bullish attack in correlation with the increasing volume. In order to confirm the triangle formation it created, we said that we need to get a confirmation by breaking the $ 124 level downwards. On the other hand, bullish movements above the $ 124 level indicated that the triangle pattern was not realized. The double bottom target of $ 270 may come to the fore for the price that goes above the $ 145 level, which is one of the most critical levels for Litecoin. For now, we will be following the $ 170 and $ 215 resistance - support levels. In addition to the increase in risk appetite, if the demand for altcoins increases and Bitcoin dominance decreases, we can witness the continuation of the rapid increases of Litecoin, the 4th largest crypto currency.
Bu kaynak metin hakkında daha fazla bilgiEk çeviri bilgileri için kaynak metin gerekli 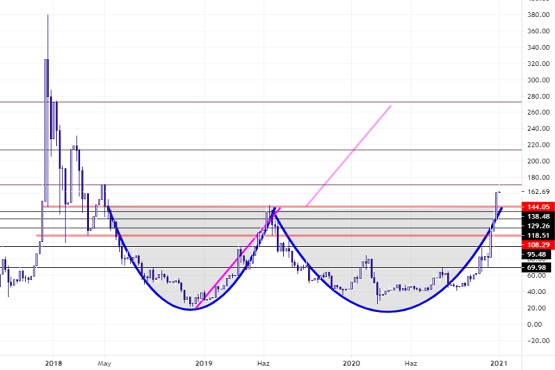 LINK was also the winner this year with 537% on an annual basis. While Chainlik was experiencing over 10% activity this morning, it threw the black swan syndrome on LINK and started its rise, especially with the movement of ethereum. Although it approaches Bitcoin with 15% in weekly returns, since LINK is an Ethereum consensus coin, it can be followed with Ethereum with 45% return. Unless Ethereum drops sharply, LINK's movements can also be expected to converge to ETH. Social media rumors suggested that, like Ripple, Chainlink would also be sued, but Chainlink was founded in the Cayman Islands, while RIpple is of US origin.

When we consider LINK / USD technically; ended the descending channel with the last upward move. With support at $ 15.70, LINK can take its rise to new highs as long as it does not break this support in pullbacks. 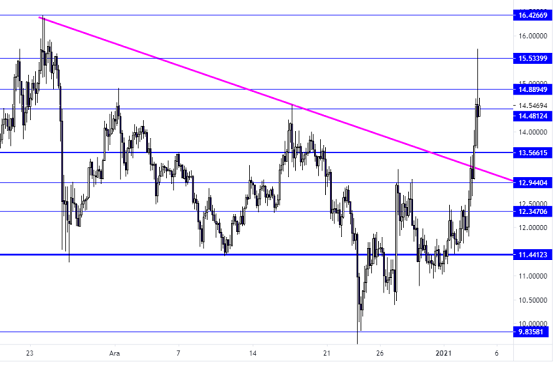 BAT / USD parity has increased by 17% in the 24-hour period and is priced around $ 0.23. We see that the pair, which took its share from the rise led by Bitcoin and Ethereum, broke off from its major horizontal trend and started a rapid rise. If the pricing above the $ 0.23 support level, which is the Fibo'50 correction, is stabilized, upward movements can be seen in line with the Bitcoin and Ethereum correlation. For now, we will be monitoring support levels and Bitcoin prices. 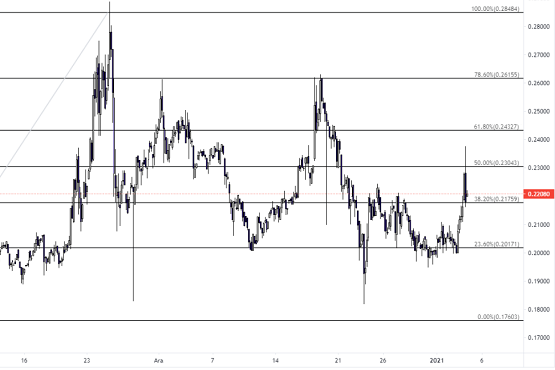