While a claim has been made about the use of Ethereum infrastructure in the digital shekel studies carried out by the Bank of Israel, the claim has not yet been denied by the institution.

China-based mining company Canaan announced that it has started mining operations in Kazakhstan.

For the request of Valkyrie Digital Assets, which applied to the SEC for a Bitcoin ETF in January, the SEC has postponed the decision period by 45 days to August 10.

According to the Financial Times report, South Korean authorities confiscated more than $47 million in total cryptocurrencies belonging to 12,000 people accused of tax evasion.

Law Proposal for Cryptocurrencies from MPs in Iran

The Bank for International Settlements (BIS) has announced its full support for the development of central bank digital currencies (CBDCs) in achieving financial and monetary stability through international cooperation with the mandate and support of central banks.

Bitcoin is priced at $32,820, declining by 2.5 percent in the morning hours. When we examine the chain data, although there was a BTC exit from the exchanges yesterday, today there is a low amount of entry ($18 million). When we look at the market from a miner's perspective, we see that the Puell Multiple metric has regressed to the level of 0.69. We show that the possibility of selling pressure on the side of these miners is low and we interpret it positively. However, the short-term direction is uncertain for Bitcoin, which is priced close to the support zone.

The price movement continues within the horizontal channel that exists as of May 23, which we technically examine the BTC/USDT parity in a four-hour period. Testing the lower band of this channel on May 23 and June 8 before, BTC was on the rise with the support it received. Although Bitcoin declined to $ 28,800 on June 22, it kept on the channel lower band with the rapid reaction that came with it and subsequently rose to $ 34,900. The MACD has given a buy signal in the oversold zone in the 4-hour period and is maintaining this signal. If the monthly DEMA and the resistance at $33,200, which coincides with the downtrend, are broken, we expect the continuation of the upward movement. If the downtrend is not broken, there may be a pullback towards the $31,400 levels. 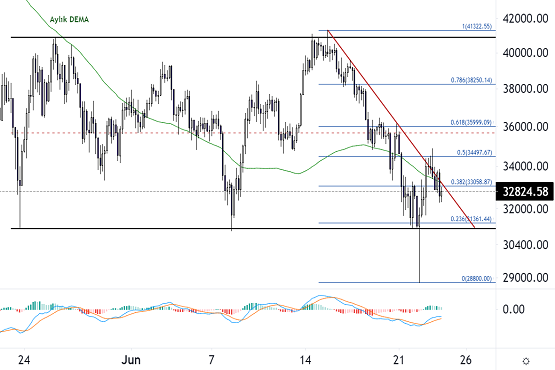 Ethereum, which decreased by 2.2 percent in the morning hours, is priced at $ 1921. Testnets and forks, which were previously in the London hard fork stages, continue. Today, there will be a fork of Ropsten, whose testnet was realized before. In the long term, we interpret the London hard fork as positive for Ethereum. When we examine the chain data, we see that there is a decrease in new and balance accounts belonging to Ethereum and that investor interest is weak.

When we look at the ETH/USDT parity technically, ETH, which was priced above its 200-day moving average and the support at $ 1881, was priced above the two-week average, but could not sustain at these levels. The first level of resistance for Ethereum is the two-week DEMA, which coincides with the 1965 levels, with support at $1881. If it persists above the two-week DEMA, it would be healthier to follow a strategy of buying near support and selling near resistance in the short term for ETH, which we expect to move towards $ 2079 levels. 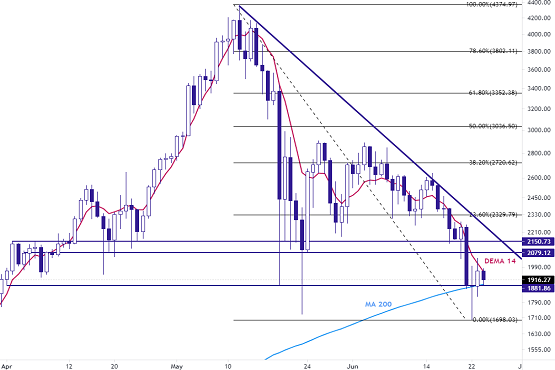 AVAX is priced at $11.25 with a 1.5 percent depreciation in the morning hours. When we look at the AVAX/USDT parity technically, AVAX, which closed daily in the resistance zone of $ 11.30-12.10 yesterday, retested the January 2021 low levels of $ 10.70 in the morning. Although there is a rise towards the resistance zone with the support it found at these levels, it will be healthy to expect a daily close above the resistance zone for the continuity of the rise. If AVAX clings to the lower Bollinger band in the daily period, if the upward movement continues, the $13.00 levels, which coincide with the descending channel and Bollinger middle band, are read as the next target. 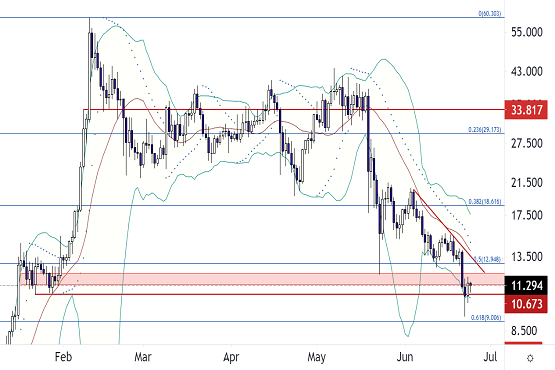 It is priced at $0.64, up one percent in the morning. On June 23, there was a development in the case. Ripple had previously requested to see the SEC's domestic trade policies. He stated that it is very important for the case to see why XRP stands out from other crypto assets and to understand the SEC's approach to trading digital assets. Judge Netburn granted Ripple's request, and the SEC will have to explain its domestic trade policy. We find this development positive for Ripple. Additionally, the SEC's counter-letter to Ripple's request to testify from a former SEC employee will be submitted to the case today and reasons will be provided.

Technically speaking, XRP/USDT, which managed to hold on to the weekly DEMA, is priced above the $0.635 levels where the two-week DEMA is located. If it persists above these levels, we expect it to move towards the resistance at $0.69. A short-term buy-sell strategy can be followed, with $0.60 levels corresponding to the weekly DEMA as support. 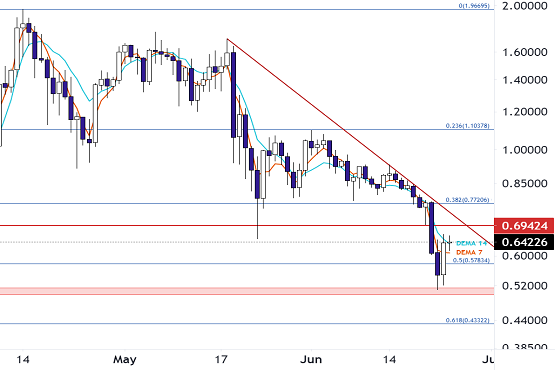 Litecoin, which rises by one percent in the morning hours, is priced at $130.40. When we examine the chain data of Litecoin, we see that there is a recovery in the addresses with balances on a seven-day average and investor interest has started to gradually increase in Litecoin.

When we look at the LTC/USDT parity technically, it found support at $124.24 and remained above this level. Continuing its upward movement, the first level of resistance for LTC will be the $136.89 levels coming into the Bollinger middle band. On the upside break of these levels, $139.47 and $145.00 on the downtrend will be resistance, respectively. While the Parabolic SAR signals to buy, it will be appropriate to buy near support and sell near resistance, with $124.24 levels of support and the levels we specified as resistance. 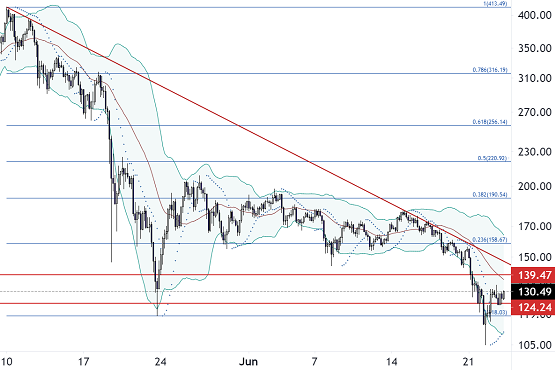 LINK, which fell by 2 percent in the morning hours, is priced at $ 18.13. When we examine the number of active and new addresses on the 7-day average, we see a slight increase yesterday, although it has been on a decreasing trend for a long time, and we interpret this situation as positive. When we consider the LINK/USDT parity technically, LINK, which has support at $ 17.31, continues its movement towards the resistance, which corresponds to the levels of $ 20.22. MACD supports LINK's rise with signal in the buy direction. In the short term, it would be more appropriate to buy near support and sell near resistance. 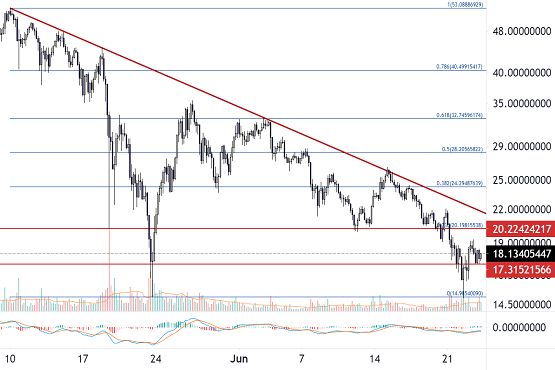 It is priced at $0.54, down 2 percent in the morning hours. In the chain data, we observe a decrease in the number of active addresses on behalf of BAT on an average of 7 days. When we examine the BAT/USDT parity technically, BAT, which made its daily close above the resistance level of $ 0.539 yesterday, is priced just below this level in the morning hours. BAT, which gives a buy signal from the oversold region in the daily period, may continue to rise. If the price holds above $0.539 and works as a support level, it is expected to see rises towards the $0.6155 levels, which is the descending trend and Fibo'23.60 slice. 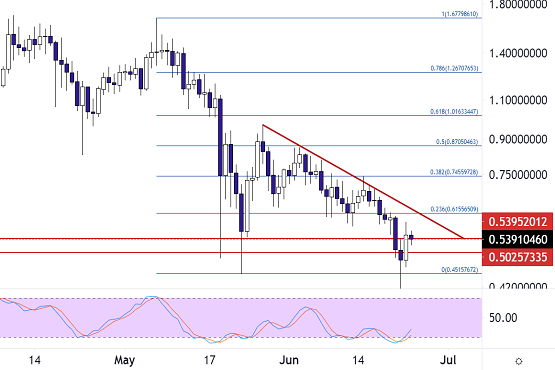