According to the JP Morgan review, he explained that the success of Grayscale, and in particular its Bitcoin-based product, is one of the important steps to prevent Bitcoin from correcting. Continuing his statements, Grayscale also stated that customers are allocating sufficient funds to Bitcoin Trust to keep the market price at the current level.

JPMorgan, one of the largest investment banks in the world, thinks that Bitcoin (BTC) could eventually reach $ 650,000 if market capitalization turns into gold. Alternative "currencies" such as JPMorgan, Gold and Bitcoin were relatively main beneficiaries of the pandemic, increasing their assets (for investment purposes) by 27% and 227% respectively.

MicroStrategy, the largest publicly traded independent business intelligence company, announced that its Bitcoin purchases in 2020 were worth $ 1.1 billion. The company bought 29,646 bitcoins for $ 650 million on December 21. Thus, the company that made the fourth of Bitcoin investments said, "We believe that Bitcoin is a reliable store of value and that we have reinvested in Bitcoin is an indication of this."

The United States (USA) Congress has agreed to conclude a COVID-19 incentive deal worth $ 900 Billion. According to a report released by CNBC, the new stimulus package was accepted by Congress on Sunday, according to Senate Majority leader Mitch McConnell and Minority Leader Chuck Schumer.

SEC, which was preparing to sue Ripple company for the XRPs they launched in 2012, accused the company of "selling unregistered securities". Company executives argued in their testimony that this was an attack on the entire cryptocurrency world and that the SEC's intervention was inappropriate.

Bitcoin is pricing at over $ 22,000 this morning with a horizontal change. We see that the concerns are rising after the increasing COVID cases and the mutation of the virus in the world, and with it, the volatile indicators increase. When we considered the situation in March, we had similar situations and witnessed that there were sales in the whole market. VIX rose to 27%, while Bitcoin volatility rose to 63%. Although the popularity of corporate purchases to Bitcoin continues with the $ 650 million purchase of Microstrategy, in addition to COVID cases, events such as Ledger and EXMO hacking are reasons that may create uncertainty in terms of the course of the market.

When we consider BTC / USD technically; The negative mismatch between price and momentum continues. According to the Fibonacci retracement levels, it appears as a daily narrow trading band of $ 23,150-22,400, which is between 23.6% and 38.2%. Although the minor uptrend still continues, technical uncertainty does not make this trend strong, but it is worth noting that this trend will end if the mid-level breaks at $ 21,870. The view is horizontal and with a slight bow. 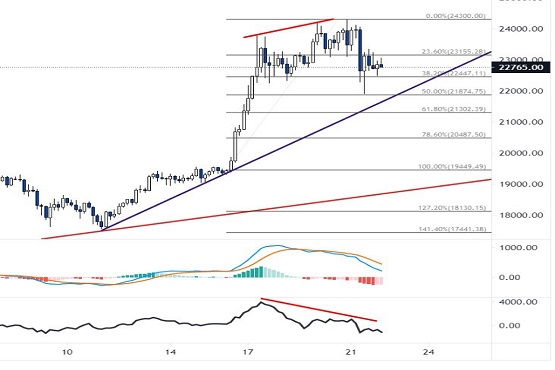 Ethereum is hovering above $ 600 this morning after yesterday's market sales. Some sales were seen in Ethereum due to the pullback in bitcoin prices. The most important reason for this was not the pricing 2.0 update in ETH, but the rise of Bitcoin. For this reason, the network density (hash rate) started to increase in Ethereum, which did not lose its future potential in its rise. We can mean that the demand for Ethereum is beginning to increase, but the daily and weekly sales of Ethereum assets at Grayscale, the world's largest digital fund, unfortunately does not signal the beginning of a new trend. Yet, in the background, we think it has the potential for future maturity as the money held in DeFi approaches $ 17 billion. For this reason, we can say that this withdrawal can be potential, as long as some technical rules are not broken in Ethereum.

Technically speaking, ETH / USD is the main support at $ 600; First, it is the point of return to the old bullish channel, and second, the point where the uptrend has been going on since November. The sagging points of this trend are also past the $ 590 level. That's why we've reached critical support levels. As long as there is no protrusion below this region, prices can be expected to rest in this region. The news flow is intense and volatility continues to rise. Therefore, although this region has potential according to technical analysis, it is useful to consider other factors. 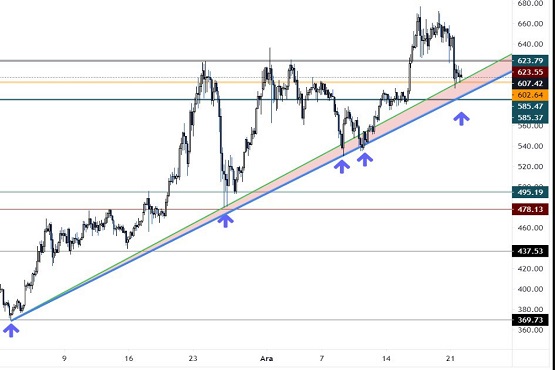 AVAX / USD is losing value around 2.2% this morning. Unable to take advantage of the market movement recently, AVAX remained weak. Technically, the double bottom image that would end the decreases was broken and the bullish channel was left. Therefore, short-term pressure will not disappear until 3.40 level is broken for AVAX / USD where the weak outlook continues. The outlook is weak and in the direction of the downtrend. 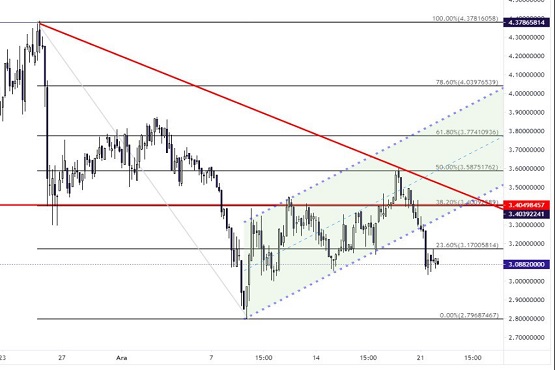 The US regulator, SEC Ripple, is preparing to sue the company for XRPs they launched in 2012. The SEC said it was preparing to file a lawsuit against the company for "sale of unregistered securities". Although company executives Larsen and Garlinghouse argue that XRP is a currency, not a security, so it is not the subject of the SEC, it is unlikely that they can get out of business that way. Therefore, XRP / USD is watching a 10% sell-out this morning, while Stellar's founder is a former partner of Ripple, and it's about 5% sellers. On the other hand, with the clarification of the Spark Token airdroup conditions, versatile sales in Ripple were prevented.

When we consider XRP / USD technically, the pair, which declined to $ 0.43 levels, poses a great risk towards the $ 0.20 zone before November if it cannot hold in this zone. The $ 0.43 zone is the last leg of the trend since the near $ 0.78 peak. Therefore, the fall may be a big risk in XRP. The outlook is weak and in the direction of the downtrend. 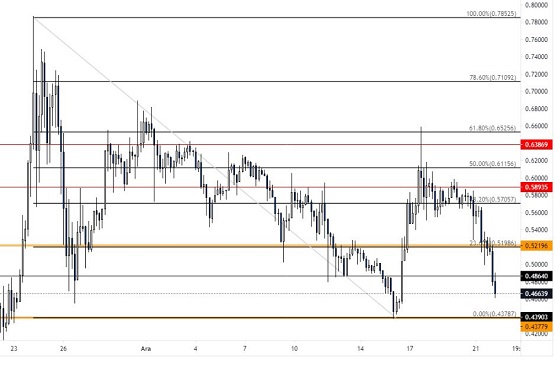 Litecoin has been keeping pace with the market this morning, trading 1% below the $ 102.90 level with slight sellers. After PayPal's listing, it outperformed Bitcoin, making it 15 points better than BTC on weekly returns. Litecoin, which experienced a decline on Bitcoin due to both COVID and the developments in the crypto market, is still at the top of the coins we like as Research Unit. Since Litecoin yields above Bitcoin in weekly returns, it is also quite normal to be ahead of BTC in decline. Its volatility is 102% above Bitcoin volatility (62%).

When we consider the LTC / USD technically, after its return at the $ 124.60 level, the pair is moving towards the OBO image. Selling pressure continues in LTC / USD, which is on the uptrend above $ 92. Because, if the outlook is approved in the direction of OBO, it may be a sign that the uptrend has ended and the short-term pressure will continue. The outlook is downward in the short term. 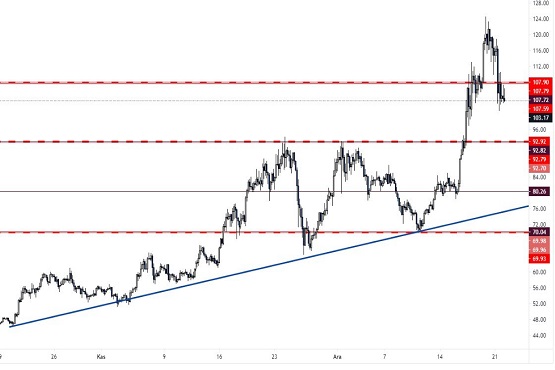 Chainlink, one of the rare cryptocurrencies that did not take advantage of this while the market was taking the opportunity to rise under the leadership of BTC, is trading at $ 12.20 this morning with a 0.6% drop against the dollar. Nevertheless, LINK, where the cooperation news comes, has potential with its future projects, and can take its place among the coins that can be mobilized with the start of the altcoin season. For this reason, we continue to like Chainlink as a unit even though it cannot keep up with the latest rise.

When we consider LINK / USD technically, the downtrend that has been going on since August has continued, but it has created a minor rising channel under this trend. While the last level of $ 12.20 will be the support point of this channel, if it breaks this region, the technical outlook will also become negative and will become more open to selling pressure. While holding on for now, LINK / USD has potential for possible reactions towards the declining trend towards the $ 14.00 level, we do not see any movement yet. 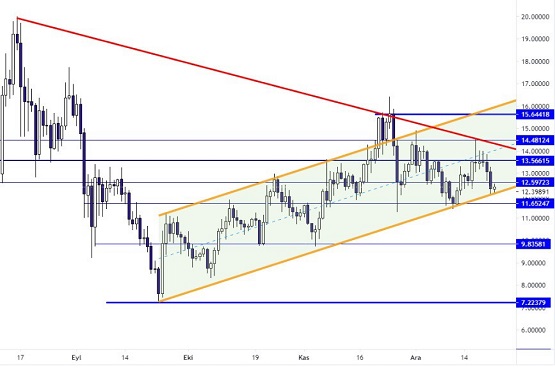 BAT / USD, which is currently trading at the level of 0.21840, started the day with a retreat around 2.5% in a downtrend. If the retracement is sustained, the 23.60 Fibo retracement of 0.21500 support may come into question. Although it is in a descending trend position in the short term, it is likely that it will test 0.2500 levels on the major trend with the strength it will get from the support point. Still, the outlook is weak and the correlation between Bitcoin and BAT is positive, so it does not seem easy for BAT to move before BTC moves. In the short term, the outlook is downtrend and weak. 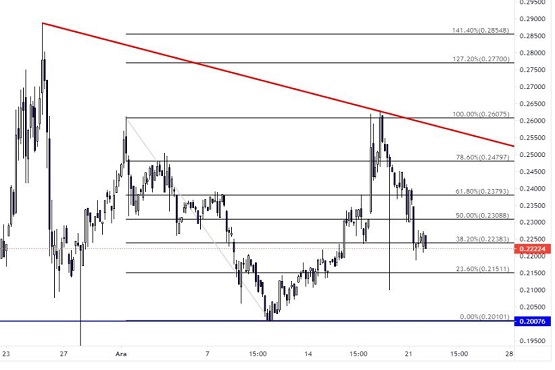