JPMorgan Chase began offering an on-premises Bitcoin fund to Private Bank customers for the first time this week, completing its transformation from an anti-Bitcoin megabank to a real player in the field of digital assets.

The highly anticipated London hard forkuth took place yesterday and launched the EIP-1559 upgrade, which regulates gas charges. Part of this arrangement introduced a mechanism that burned some of the base fees collected.

"We see performance parallels that can take crypto to $100,000," bloomberg intelligence analyst Mike McGlone said, comparing Bitcoin performance to the start of 2019.

In the announcement, Swisscom made clear its intention to enter the rapidly expanding decentralized finance (DeFi) space, adding that it would do so as an oracle node operator as part of a pilot program with the Chainlink network.

Chain data firm CryptoQuant said on social media earlier this month that a total of $131 billion worth of Bitcoin had been moved in a single day, of which only 1% had been invested and withdrawn from cryptocurrency exchanges. He said this may have been due to otc agreements and acquisitions by corporations.

Bitcoin, which lost about 1.5 percent in the morning, is priced at $40,300. JP Morgan, a major anti-Bitcoin bank, this week began offering an in-house Bitcoin fund to Private Bank customers for the first time. However, a total of $131 billion worth of Bitcoins were moved in a single day earlier this month, and only 1% of that amount was deposited and withdrawn from cryptocurrency exchanges, according to the chain data company. This may be due to the fact that enterprise is buying through OTC agreements.

When we consider BTC/USDT parity technically, BTC found support at 37500 dollars, which corresponds to Fibo'38.20 with the august 1 peak of $42605, again forming a double dip formation at this level. With this formation, the al signal increase from MACD in a 4-hour period is a supporting factor. The formation target is $42600, the previous peak level. 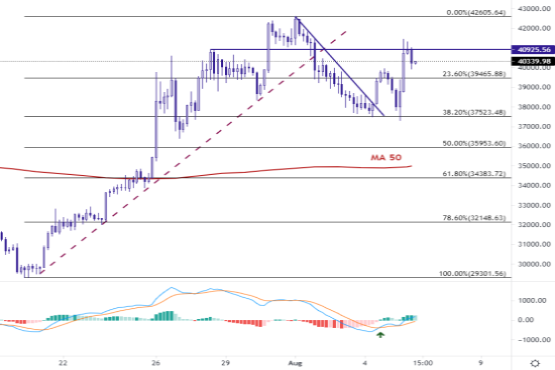 ETH, which lost about 2.0 percent in the morning, is priced at $2764. The expected London Hard Fork took place in the chain's 12,965,000th block yesterday. Looking at network data after upgrades, the Ethereum network currently burns $395,000 ETH per hour. Updates to Ethereum are not only news, these upgrades are important developments in the project and the medium and long term can positively differentiate ETH according to the market as a whole.

When we consider the ETH/USDT parity technically, it found support from Fibo'38.20 after the withdrawals it experienced since the last August 1st peak. Yesterday, ETH, which declined to $2529 with sales across the market after the upgrade took place, closed the day at $2826, above the Fibo'50 tranche. Our target of $3300 for ETH, which we interpreted positively in terms of outlook in the daily period, remains up-to-date. 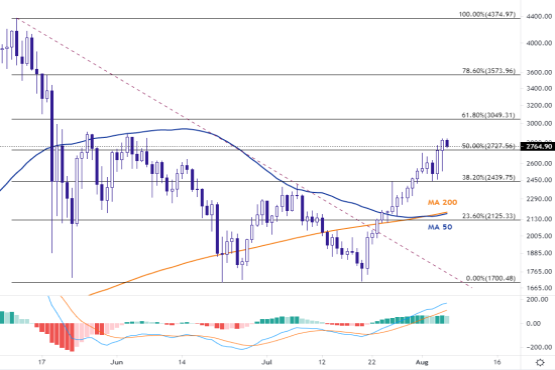 AVAX, which lost about 1.75 percent in the morning, is priced at $13.53. When we technically examine the AVAX/USDT pair, avax, priced above its existing rising trend as of July 22, experienced a retreat to $12,957, which corresponds to Fibo'23.60 yesterday. AVAX, which reached the level of $14 that we mentioned in the bulletin yesterday with its support from this level, maintains the macd buy signal in a 4-hour period and supports the increase in trading volume. The outlook for AVAX is positive. 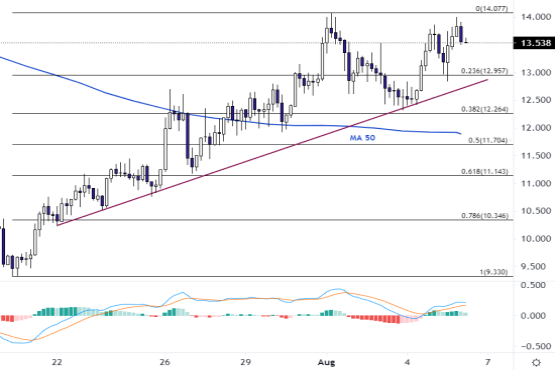 Ripple, which dominates the horizontal price movement in the morning, is priced at $0.728. It was recently claimed that the sec Garlinghouse made the majority of the infringing XRP sale on overseas platforms and therefore could not be subject to this law. However, the Rıpple CEO had applied to the Southern Court of New York to obtain the relevant documents from the foreign-based exchange. It was reported yesterday that garlinghouse's request for an international investigation submitted to the court has been accepted. 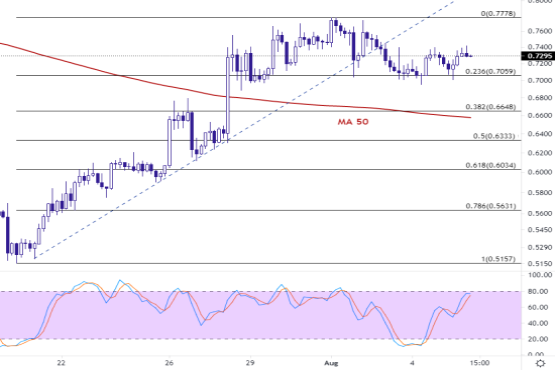 Litecoin, which gained about 1.5 percent in the morning, is priced at $146.0. When we look at grayscale data, when we examine the chain data for Litecoin, which is +42.02% of premium, there is a net increase in the 7-day average of the number of new addresses. However, while the decrease in the number of active addresses has ended, there is no mention of the rise. The coming period is expected to be more positive for LTC, which is priced behind the market.

When we consider the LTC/USDT pair technically, LTC has clearly held on to the 50-day moving average, rising to $147.5 yesterday from $136.95, which corresponds to fibo'23.60. When you're examining it over a four-hour period, it shows a pick-up signal from MACD yesterday. Significant resistance to LTC. If the $149.18 level is maintained above the upward breakdown, rapid rises can be seen with it. 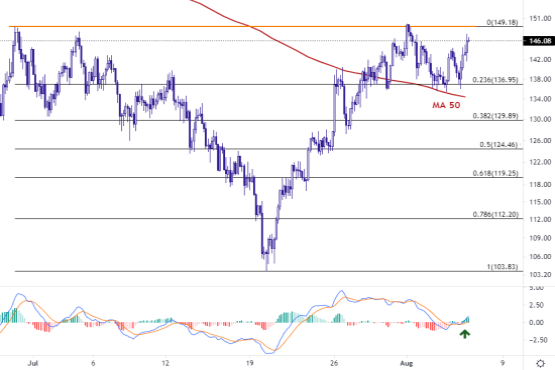 LINK, which lost about 3.1 percent in the morning, is priced at $23.36. Corporate interest continues on the DeFi side. Swisscom has made clear its intention to enter the rapidly expanding decentralized finance (DeFi) space, adding that it will do so as part of a pilot program with the Chainlink network, as an oracle node operator. LINK has been pricing positively relative to the market average for a long time, and this newsfeed is another factor supporting the positive outlook for LINK in the coming period.

When we examine the LINK/USDT parity technically, link, which has long held above the 38.20 tranche of the Fibonacci correction, which was reduced from the May 10 peak level of $53 to the July 20 low of $13.46, is retreating towards this level in the morning hours. Although the upward momentum appears to be slowing in the daily period, macd retains the al signal. The first short-term target is $23.67 unless the daily close is below the $22.72 level, which is Fibo'38.20. 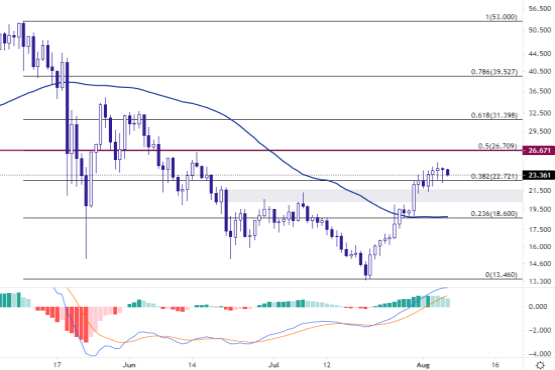 BAT, which lost about 2.1 percent in the morning, is priced at $0.665. When we check the institutional investor side, it is seen that there were 393,844 fund purchases by Grayscale in the last month. The medium-term outlook for BAT is positive.
When we consider BAT/USDT parity in technical terms, BAT recently broke the upper band of the existing horizontal channel as of June 18th, and with rapid recovery, it broke the upper channel band upwards again. BAT, which rejected this band from above, which was at $0.643 yesterday, started to move in the direction of the upward trend with the buy signal from MACD in the 4-hour period. The initial target for BAT is $0.72. 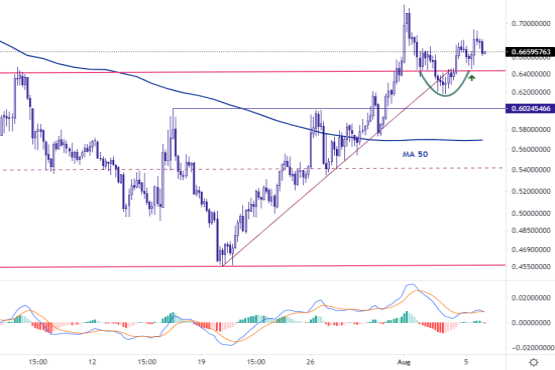