Jon Oringer Bought from the Bottoms

Shutterstock founder and CEO Jon Oringer stated that he made purchases from the bottom regions in the last drop in cryptocurrencies and that he thinks crypto assets will remain in our lives for a long time.

The Australian Securities Regulator has released a public advisory to decide how to regulate cryptocurrency-based products.

Aave Will Offer New Service For Institutional Investors In July

Leading DeFi money market Aave announced this month that it plans to launch a permissioned version of its platform for institutional investors.

Due to the complex situation faced by miners in mainland China, Bitcoin's mining profitability is expected to increase in the short term. According to Whit Gibbs, CEO and founder of Compass, this will continue in the short to medium term.

SEC member Hester Peirce said the regulator should have approved a Bitcoin ETF in the US a long time ago.

Bitcoin, which lost 2.72 percent in the morning hours, is priced at $ 34,297. When we examine the Bitcoin chain data, we interpret the weekend increase in the number of active and new addresses on a 7-day average positively. In addition, when we examine the weekly outflows from the stock markets, the fact that there is an outflow of 593 million dollars on the Bitcoin side tells that investors are pulling from the stock markets to hold BTC, this development can be considered positive.

When we consider the BTC/USDT parity technically, we see that it broke the downward trend that has been going on since May 10th upwards over the weekend and retests the descending trend today. Persistence of BTC above $ 34,100 will be very important in terms of continuing the downward trend in the upward price movement. The two-week DEMA level ($34,091) can be seen as the nearest support level. A downside break from this level could trigger a price move towards the $33,500 levels. If there is a continuation of the upward move, it is critical to sustain above the $34,838 levels, which coincides with the Fibo'23.60 retracement level. 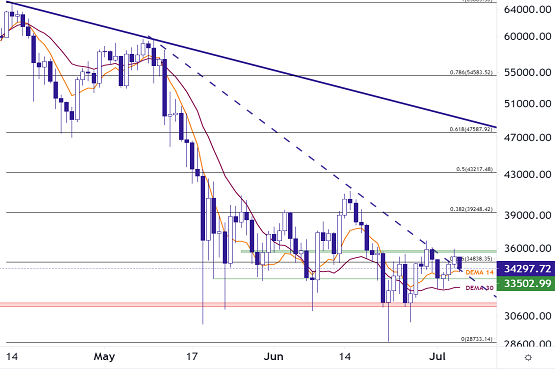 Ethereum is priced at $2275, depreciating by about 2 percent in the morning hours. When we look at the chain data for ETH, we see that approximately $2 billion of ETH is transferred from exchanges to wallets in a weekly period. This decrease in the amount of ETH held on exchanges reduces both the confidence of investors in Ethereum and the pressure that may be experienced in the direction of selling. However, ETH locked in smart contracts accounts for 23.64 percent of the total supply. In a statement made by JPMorgan, it was stated that Ethereum upgrades could accelerate the $ 40 billion staking industry.

When we examine the ETH/USDT parity in technical terms, ETH, which retested the major descending trend that has existed since May 12 on Friday and found support at $ 2041, continued to rise over the weekend. With this upward movement, it closed daily above the 30-day moving average. When we examine it in the daily period, the stochastic continues its signal in the direction of buy and the RSI is above the resistance level. The next resistance level for ETH, which we expect to continue in the upward price movements, is at $2517. Considering the chain data and news feed, the outlook for ETH is positive. 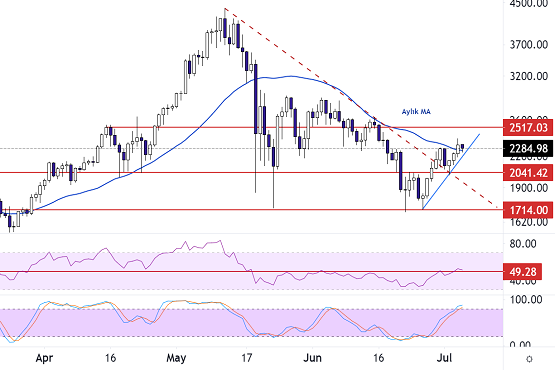 Moving sideways in the morning hours, AVAX is priced at $12.30. Breaking the major descending trend that has existed since May 20, AVAX continued to rise with the breakout last weekend. By breaking the resistance level in the $11.6-11.9 band to the upside, there was a rise to the $12.9 levels, which is the Fibo'50.00 tranche. Retesting the $11.6-11.9 band with the reaction from the Fibo'50.00 slice, AVAX is moving upwards again with the support it found here. In the 4-hour period, the stochastic gave a sell signal from the oversold zone. No downside price action is expected for AVAX unless there is a daily close below the $11.60, level. $12.94, which coincides with the Fibo'50.00 tranche, is seen as a critical resistance level. If this level is broken and permanence is provided, we expect the rises to continue for AVAX. 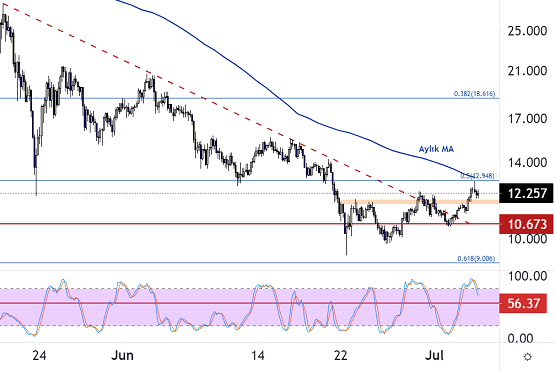 Ripple, which fell by 2.89 percent in the morning hours, is priced at $ 0.6757. Although the progress in the case seems to be in favor of Ripple, there is no positive or negative news flow as of today. Technically speaking, XRP/USDT, which is priced just below the weekly DEMA ($0.677) level, has been continuing its upward trend since June 22. In case of a downtrend breakout, we would expect the $0.64-0.65 band to act as the nearest support level. In case the upward movement continues, it will be critical to break the $0.70 levels to the upside and maintain these levels. Although the MACD supports XRP in the buying direction, buying near support and selling near resistance will be a healthier strategy in the short term. 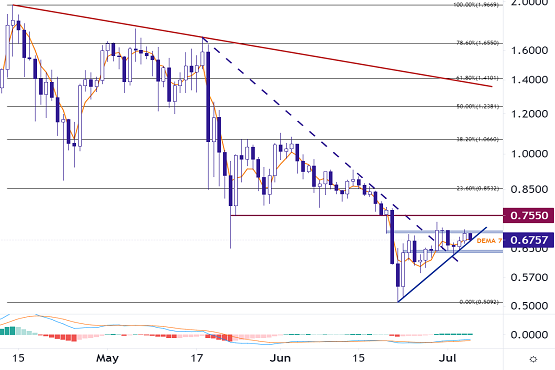 Litecoin, which lost 3 percent in the morning hours, is priced at $140.49. When we examine the Litecoin chain data, there is a decrease in the number of active and new addresses compared to the 7-day average, and although it is a relatively negative development, we expect Litecoin to be positively affected by this increase if an upward movement starts in the market.

When we look at the LTC/USDT parity technically, we can say that it is priced above the upward trend that has been going on since June 22 and just below the weekly DEMA ($ 141.18) level. We consider these levels as an important resistance level for Litecoin, which does not sustain above the $144.84 levels, which coincides with the Fibo’23.60 correction level. If it persists above the $144.84 resistance, we expect the price to continue moving towards the $156.40 levels. If the downside continues, the two-week DEMA ($135.45) levels will act as the nearest support level. Although Parabolic SAR and MACD are supporting Litecoin in the buying direction, it may be healthier to wait to see resistance breakout in the short term. 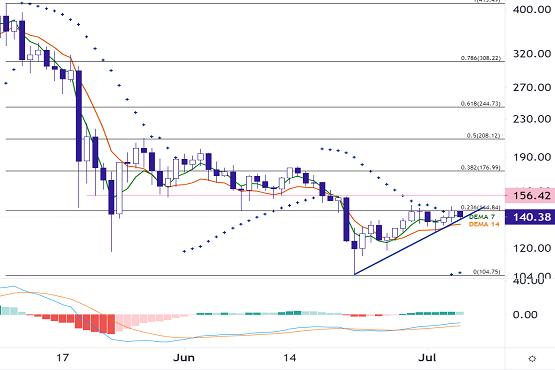 LINK, which fell by 2.87 percent in the morning hours, is priced at $ 18.69. When we look at the LINK /USDT parity technically, we see that it broke the downward trend that has been going on since May 10 to the upside and is priced above this trend and just above the weekly DEMA ($ 18.68) levels as of the morning hours. For LINK, which tested above the $19.69 levels, which coincided with the Fibo'23.60 retracement level last weekend, but failed to sustain at these levels, the nearest resistance level is seen at $19.69. In case the price action continues to the downside, the $18.15-18.20 band, which coincides with the downtrend, can act as support. In the short term, buying and selling near support and resistance may be healthier. MACD and Parabolic SAR continue to support LINK on the upside. 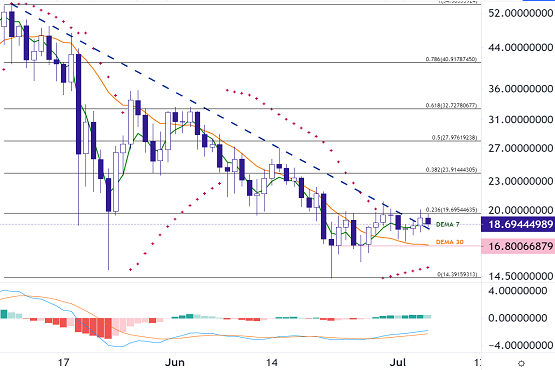 BAT, which lost approximately 4 percent in the morning hours, is priced at 0.581 dollars. When we look at the BAT/USDT parity technically, BAT, which broke the descending trend that existed as of May 24 at the weekend, rose to the resistance level of $ 0.615, which is the Fibo'23.60 slice. At the same time, it experienced a pullback towards the rising minor trend with the reaction it saw from this level, which also includes the 30-day moving average. For BAT, which is currently testing the ascending minor trend at $ 0.581, if there is a 4-hour close below this trend, a pullback towards $0.54 can be expected. If the $0.615 level, which is the monthly average and the Fibo'23.60 tranche, is broken to the upside, it is expected that there will be an increase towards $0.745, which is the Fibo'38.20 tranche. 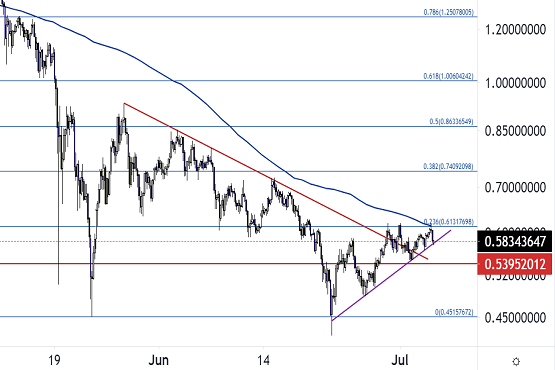