Analysts at JPMorgan Chase have lowered their long-term Bitcoin price target of $150,000 to $38,000 after the price of the flagship cryptocurrency fell to an all-time high of $67,000 from $34,000 before recovering.

Deloitte: According to the Survey, 82% of Indians Plan to Invest in Crypto After the Government Provides Regulatory Clarity

A recent survey by Deloitte shows that when the government provides real clarity on the regulation of crypto assets, 82% of Indians plan to invest in cryptocurrency. Furthermore, the survey found that 77.4% of respondents want cryptocurrency to be treated as securities.

Fed to Release New Study on Risk and Promise of Stablecoins

The federal reserve has released a new research report on stablecoins. Researchers are studying the current ecosystem and how expansion may affect the stability of US monetary policy. The report advocates for a two-tiered approach to preserve stability, which would have issuers rely on commercial banks for reserves rather than banking their tokens solely with Fed deposits.

Salvadoran President Nayib Bukele has argued on social media that Bitcoin will see a "gigantic price increase" in the future as more affluent individuals move to buy the flagship cryptocurrency, and its limited supply forces them to bid. Bukele, in a tweet shared with more than 3,5 million followers, noted that there are more than 50 million millionaires in the world. At the same time, the supply of the flagship cryptocurrency is limited to 21 million coins.

El Salvador's Finance Minister, Alejandro Zelaya, has responded to recent requests from the International Monetary Fund. The IMF, in a publication last Tuesday, called on El Salvador to downgrade the legal status of the cryptocurrency within the country. Nayib Bukele predicted a "giant price increase" for Bitcoin in a related news story.

Deutsche Börse, the leading German stock exchange operator, noted that cryptocurrency exchange-traded products (ETPs) had been quite attractive options for investors over the past year. The company outlined that the average monthly trading turnover in crypto ETNs surged to more than $1 billion, or +922% than in 2020 ($115 million).

Bitcoin gained a 0,50% value during morning hours; the current price is $38.533. When we consider the BTC/USDT pair technically, BTC continues price action below the downtrend on November 10. Recently, the daily chart of the RSI continues to rise in BTC, which breaks the downward trend that exists as of October 20 in the upward direction. As mentioned in yesterday's newsletter, a breakout of the RSI trend might trigger a downtrend breakout on price. But it is too early to say that the decline has ended because no clear reversal signal has been received in the daily chart for BTC, which we expect sales pressure to decrease, and the price movement continues below the major downtrend. 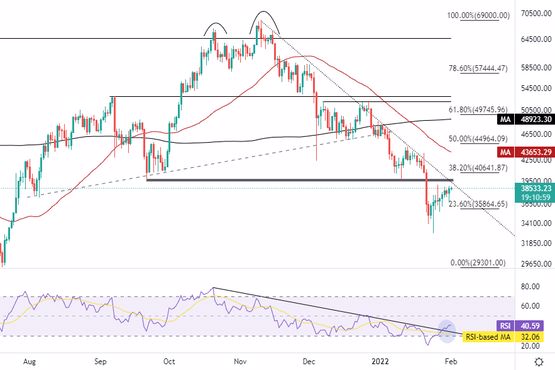 Ethereum gained a 0,80% value during morning hours, and the current price is $2738,98. When we consider the ETH/USDT pair technically, ETH had broken $2546 (Fibo'38,20) upwards at the weekend. It continues to surge after finding support at the same level yesterday. Both BTC and ETH broke the downtrend in the RSI, along with price movement yesterday. The movement appears to surge to the major downtrend. 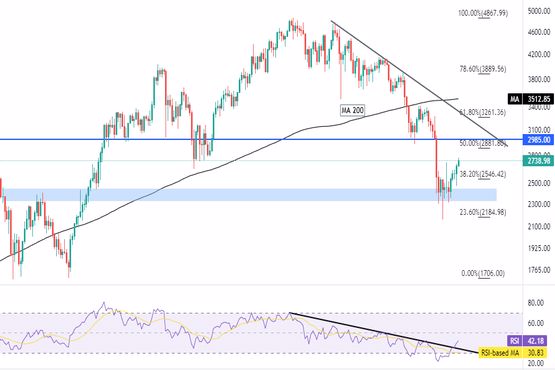 AVAX lost a 0,25% value during morning hours, and the current price is $69,80. When we consider the AVAX/USDT pair technically, AVAX surged to $76 following the sharp falls. After facing reactions, AVAX tested $66,20 (Fibo'23,60), found support, and resumed going up. If the rising continues, the resistance zone to be followed is $75,5 -79,80 (retracements can be seen). 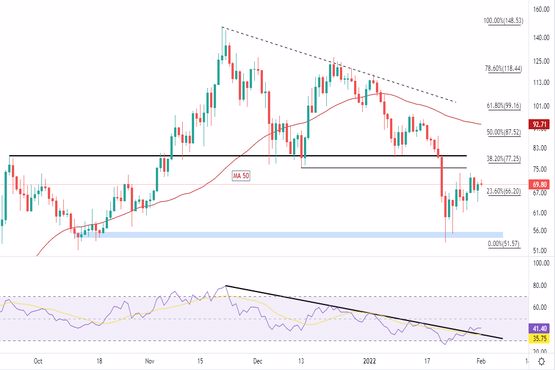 Ripple gained a 1,10% value during morning hours, and the current price is $0,6230. When we consider the XRP/USDT pair technically, XRP continues price action below the downtrend on November 10 and between the 0,5182-$0,7121 band. In a short-term base, XRP has a sideways trend. A breakout will determine the direction. 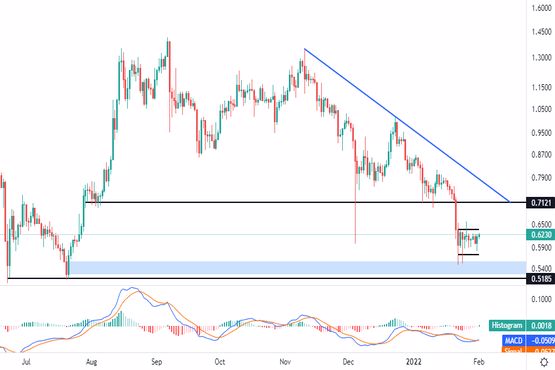 LTC gained a 1,50% value during morning hours, and the current price is $110,6. When we consider the LTC/USDT pair technically, LTC had a sideways trend between $113,1 and $104,9. So a breakout of this zone is important in the daily chart. Yesterday LTC found support at $104,9. And this morning it soared towards $113. If the breakout and a daily close occur, a rise towards $122 can follow. 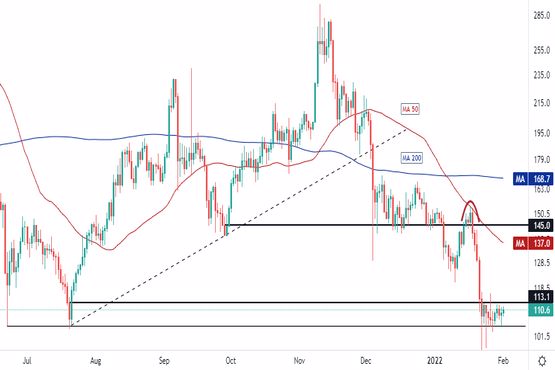 LINK gained a 1,30% value during morning hours, and the current price is $17,41. When we consider the LINK/USDT pair technically, LINK continues price action inside the ascending channel as of July 2020 in the weekly chart. Every price movement marked in blue is the support level demanded by the investors. Last week, it found support at $14,40 (the channel lower line) and the supply-demand zone marked in blue and closed the week positively. If it holds onto this zone, an upward price movement might follow. 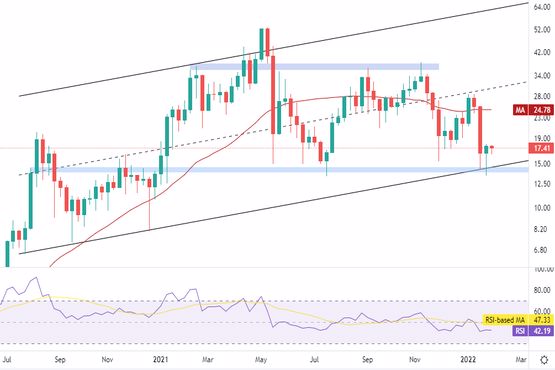 BAT lost a 0,20% value during morning hours, and the current price is $0,8496. When we consider the BAT/USDT pair technically, the outlook stays the same. BAT tested its uptrend five times as of June 2021 and broke it downwards recently. And retesting movements continue. If BAT fails to break the trend upwards and provide persistence again, a retreat towards the support zone marked in blue can be seen again. 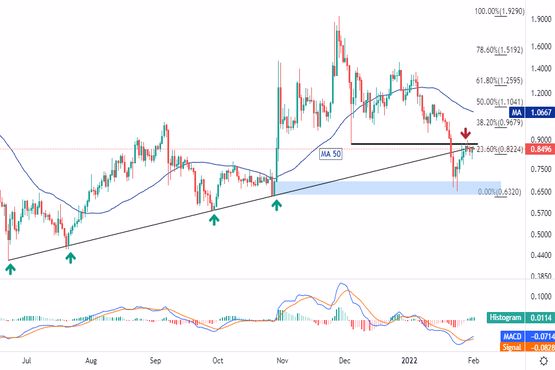