Ripple case judge Sarah Netburn previously ruled on the SEC to share documents related to BTC, ETH and XRP with Ripple. Later, Ripple submitted a request that the SEC should stop supporting foreigners and share the communications they have made with foreign regulators. However, Netburn rejected Ripple's request, and ruled that SEC should submit the said documents within 14 days.

National Bank of Egypt has announced that it partners with RippleNet in order to create a cross-border payment corridor with the United Arabian Emirates.

95% of Bitcoin’s Hashrate Signals for Taproot

95% of Bitcoin's hashrate has already started to give signal for the Taproot upgrade scheduled for November. While the signal of the miners shows its support to the community and helps to coordinate the upgrade, the last decision about the future of Bitcoin is up to the users.

Bitcoin market dominance which continues to decline after the recent decline in the market, hit 39.66, the lowest level since the week of May 14, 2018 and in the morning hours, it has risen again to 44.83 level.

The Spanish National Securities Market Commission (CNMV) has announced a directive approving institutional crypto investment under certain conditions. This directive will allow Spain-based investment funds to make their daily trading with crypto assets. However, the fund managers under the regulation should always provide necessary and clear warnings for cryptocurrencies to protect the consumer.

Iranian cryptocurrency exchanges have made statements against the government attempts to block the operations of crypto exchanges. Stating that crypto trading is not illegal, Fintech firms called on lawmakers and regulators to implement regulations that would benefit from this ecosystem.

Investment management company Ark Invest states that concerns about Bitcoin's environmental impacts are misguided. According to Ark Invest's report, the impact of Bitcoin mining could even be positive and that while renewable energies could only meet 40% of the grid needs except mining, it could meet 99% of mining-related commercial subsidies.

Kimchi Premium Is Back

The Bank of America report reveals that South Korea uses “Kimchi Premium” to curb cross-border flows of hot money. Bitcoin has a remarkable premium over international prices and is trading about $4,000 higher in South Korea.

Bitcoin is priced at $40,000 this morning, with an increase rate of around 9%. In addition to the news that China will ban Bitcoin for the 68th time since 2017, there are also expectations that India will be more friendly about cryptocurrencies. By this time, several prominent news sites that said Bitcoin will fall and even created FOMO have started to soften the picture. The fact that China will stop an important investor with such news in a forum on May 18 and the events that took place the next day also show that the decline has evolved into a different dimension rather than metrics.

When we consider BTC/USDT technically, the graphs are so distorted that technical analysis is impossible. As long as the recovery does not break the $48,350 level, we will only watch the reactions. In these days when the take profit strategy is more important, the funding rates turning negative and the BTC exit from the stock markets should be combined with the technical levels. The uptrend since March 2020 continues. Breaking down the $33,000 level can also bring unresponsive sales with it, as well as psychologically boosting it above $40,000. The outlook is reactionary, but there is no particular trend. 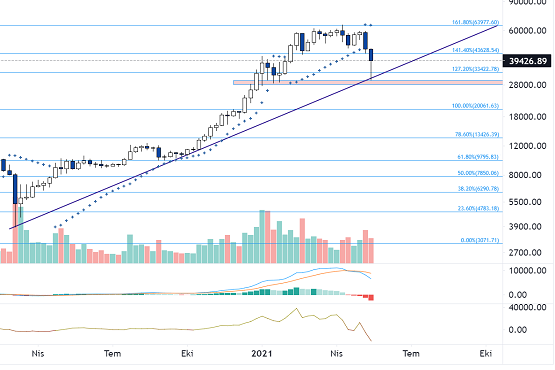 Ethereum is hovering around 8% plus around $2,650 this morning. A 40% correction may sound more normal in ETH, which has a return of 262% since the beginning of the year and 1.366% compared to the same period last year. While the amount of ETH withdrawn from exchanges increases, this will be a supportive data for ETH at the exit. However, we cannot see a significant positive change in new and active addresses.

When we consider ETH/USDT technically, it was retested after completing the OBO formation and touching and bouncing on the uptrend channel that has existed since March 2020, but the $3,650 level could not be broken and it fell sharply. Returning to its old channel, ETH held on to the middle band here. Rises in ETH can test the uptrend channel upper band it broke. 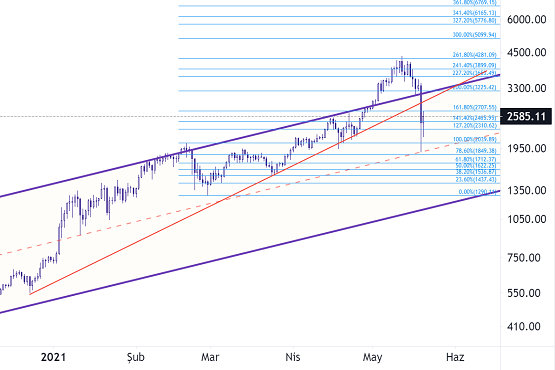 AVAX, which we see that it rises by 6% in the morning hours, is priced at $24 levels. Avalanche founder Emin Gün Sirer said in the morning on Twitter that there could be green consensus, fast finishing, high scale and a host of other innovations. Although we do not observe a great impact on pricing, we think such developments are important for AVAX.

When we look at the AVAX/USDT parity technically, we see that it has ended its movement in the rising channel that has been going on since April 23 and tested below $19, priced at $24 in the morning and $23 is the support level. If the upward movement of the price continues, we think that the $29 level, which corresponds to the Fibo'23.60 retracement level, is an important resistance. 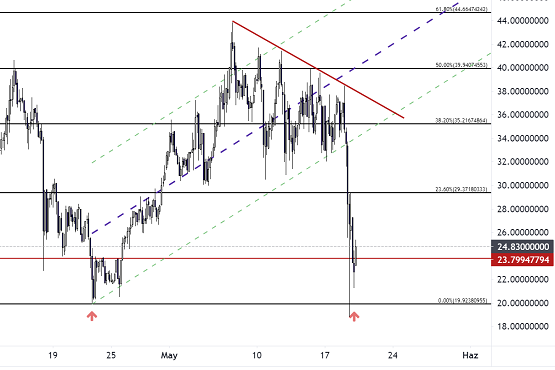 Ripple , which rose 8% in the morning hours, is priced at $1.13. Ripple case judge Sarah Netburn previously ruled on the SEC to share documents related to BTC, ETH and XRP with Ripple. Later, Ripple submitted a request that the SEC should stop supporting foreigners and share the communications they have made with foreign regulators. However, Netburn rejected Ripple's request, and ruled that SEC should submit the said documents within 14 days. Although the decision was not entirely in favor of Ripple, the fact that the SEC had to share the documents in its possession within 14 days at the latest was welcomed by the market. We will be following the teleconference call between Ripple and SEC tomorrow and the documents to be shared by the SEC within 14 days.

When we consider the XRP/USDT parity technically, we see that XRP, which saw below $1 levels with the decline yesterday, started to recover today and is priced at $1.13. We see that the $1.20 level, which coincides with the beginning of the Fibonacci retracement, is an important resistance level for the continuity of the upward movement of the price. However, we need to see a price move above $1.29 levels in order to continue the movement of the price in the rising trend line that has been back since the beginning of April. 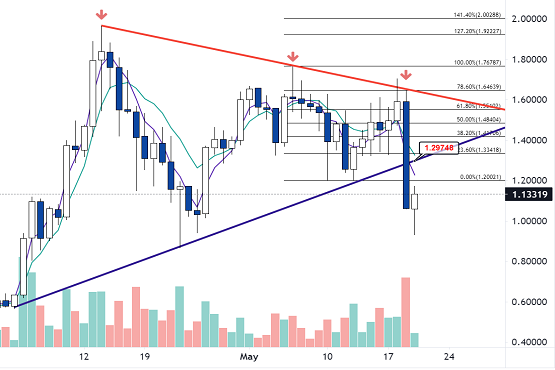 Litecoin is pricing at $201 levels this morning, gaining nearly 8% in value. With the negative weather in the market and the panic sales caused by the news on short-term investors, there was a depth of price pulls. Unlike short-term investors, when we look at the statements of big investors like Justin Sun, we see that the market defined yesterday's levels as lows and their buying appetite increased. Although fear prevails throughout the market, we see that the interest of major investors in crypto assets continues.

When we consider the LTC/USDT parity technically, LTC, which broke its short-term upward trend downward, saw an upward reaction from the important support level of $145. With the purchases made, the next resistance level is at $248 in LTC, which has risen above the $166 support. We see that the MACD continues its sell signal in the daily period. However, we see that the daily momentum is turning its direction upwards. LTC may start upward movement in the coming days if the general market starts to recover and the momentum can continue its upward movement and break its daily falling trend. If the pullbacks continue in the markets, the supports to follow are the $166 and $145 levels. 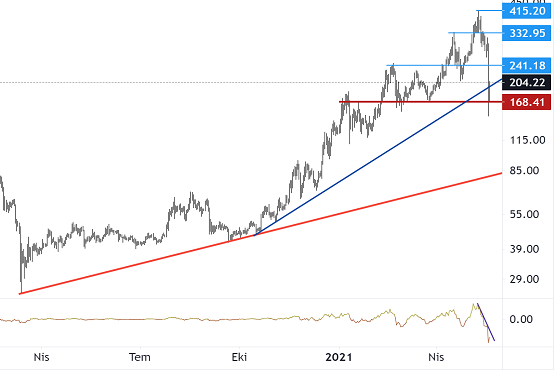 LINK is pricing at $27.9 this morning, up 6%. The sales pressure that started with the statements of Elon Musk gained momentum with the negative news from China. Along with this news, the panic sale of short-term investors stands out as one of the most important factors that deepen the downward movements. When we look at annual returns, LINK seems to have made a 138% return to its investors since the beginning of 2021. In this way, it is ahead of BTC, which has yielded 36% since the beginning of the year.

When we consider the LINK/USDT parity technically, the rising trend that passed through the lows of March and December of 2020 is preserved. In LINK, which was pulled to levels close to $20, the peak level of the week of August 10, 2020, a strong purchase was seen from these levels. Looking at the Fibonacci correction withdrawn from the top of August 10, 2020 and the bottom of September 21, 2020, LINK, which corrected from the level of $54, which corresponds to the 200% slice, is priced above the 127.2% slice with its reaction. With the recovery of the market, we think that LINK will be priced positively along with the market. 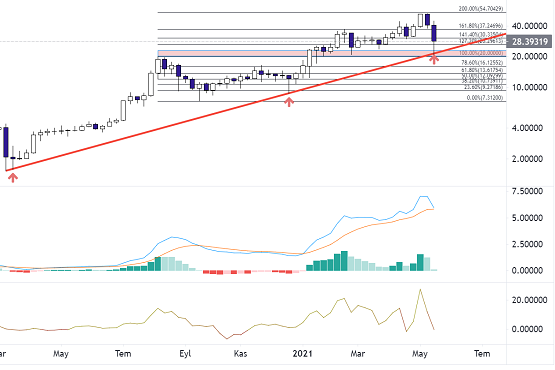 Basic Attention Token, which rose 7% in the morning hours, is priced at $0.80 levels. After the general decline in the market yesterday, we see that the market has started to recover today. According to chain data, the number of non-zero balanced addresses for BAT has been increasing since the beginning of May. We see that the interest in BAT still continues and there is no deterioration in chain data.

When we dealt with the BAT/USDT parity technically, we recently stated that the target point of the big OBO is the $0.50-0.60 band, and with the decline experienced yesterday, we completed the OBO target and also tested just below the Fibo'78.60 correction. We see that the BAT/USDT parity, which is not permanent at these points, makes the $0.70-0.77 band a support point and this point coincides with the Fibo'61.80 correction level. If the price continues its upward movement by supporting the Fibo'61.80 retracement level from this point, we see the $0.94 levels corresponding to the Fibo'50.00 slice as an important resistance level. 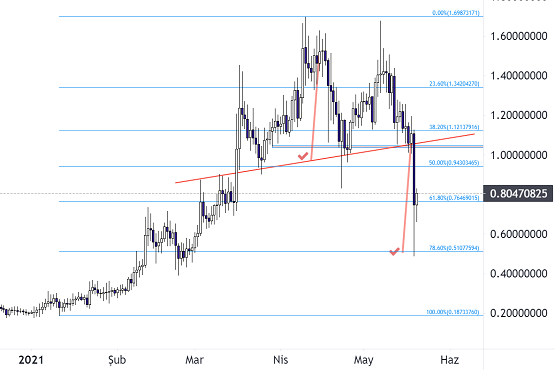