In a letter sent Tuesday to members of the House Financial Services Committee and the Securities Exchange Committee (SEC), the lawyer called on the SEC for allegedly taking the court to circles despite evidence that XRP is not a security. XRP was simply "a virtual currency," as announced in 2015 by the Department of Justice's Civilian Division and Financial Crimes Enforcement Network (FinCEN) that XRP became the first regulated cryptocurrency in the United States.

Bitcoin's Price Rises to $23K and Over $600 Million Positions Liquidated

The crypto market continues its bullish momentum this week. According to Coinglass.com data, about $630 million has been liquidated in the crypto market in the last 24 hours. More than half of that value – $377 million – was in ETH trading, especially given its marked rise as of Monday.

Dubai's crown prince, Hamdan bin Mohammed bin Rashid Al Maktoum, announced on Monday that the emirate will use the metaverse to create 40,000 "virtual jobs" and add $4 billion to its economy over the next five years.

According to the latest documents, Celsius Network is moving forward with plans to carry out the financial restructuring. The company reportedly plans to spend $3.7 million to build a new facility and $1.5 million in customs and taxes to import Bitcoin mining rigs.

"Our board has decided to temporarily suspend it until it raises capital within the fund," Scaramucci told CNBC. "The fund is unleveraged, so there is absolutely no fear of liquidation, and about 18% of the fund is being evaluated in the crypt." Scaramucci said an independent board also supported the decision.

BNP Paribas, one of the world's largest banking groups, is reportedly considering partnering with a digital asset custody company. The French bank currently has about $13 trillion in assets under management. He joined a long list of institutional firms at BNP Paribas, including Fidelity and Société Générale that want to offer crypto services to their clients.

The rise in the US markets and the positive pricing of Ethereum have positively affected the entire crypto industry. Bitcoin, which remained above the 22,000 level, first broke the $ 23,000 level upwards with this pricing and then started to rise towards the 24,000 level. With the easing of the negative news after Terra in the market, the whole market has achieved an upward momentum.

Bitcoin is pricing in at $ 23,310 with a loss of 0.4% in the morning hours. When we look at the Bitcoin 4-hour chart, which tests to break the channel it is in upwards, it seems that it has achieved this breakdown. Bitcoin, which has gained momentum with an above-average volume entry in the last few days, will be very important for the continuation of the rise if it can break the 24,000 level. Unless they receive a volume, technical or most importantly news-driven reversal signal from the market, price pullbacks and re-tests should not be considered as having started to decline. 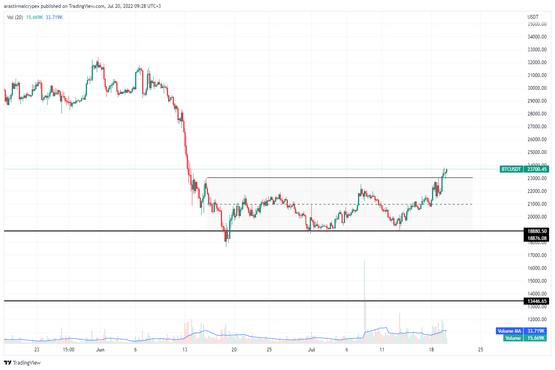 Today, ETH, which gained 1.31% in the morning hours, is priced at $ 1563. Ethereum continues to rise by breaking all the channels and resistances it is in to the upside. Ethereum, which managed to rise above its 50-day moving average, maintains its target of $ 1700. 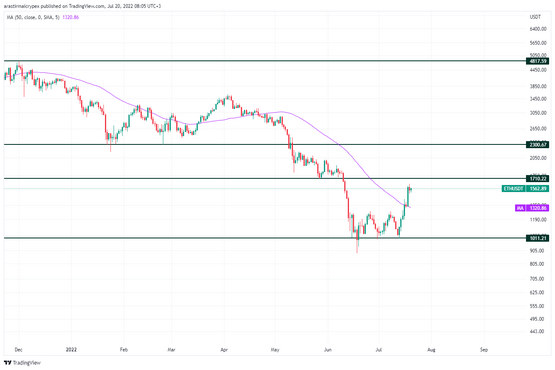 AVAX, which has gained 2.87% as of the morning hours, is priced at $ 25.44. AVAX, which is highly affected by Ethereum pricing and merge news, has managed to rise by 50% in the last 1 week. AVAX, which managed to break the channel upper band at 22.16, then reached the $ 26 levels and returned to the level of 25.50. For AVAX, we can say that the breakdown of the 26.30 level is the next target, and in a possible decline, a small demand zone at the $ 24 level has formed. In terms of volume, it seems that positive pricing will continue compared to the rising market in AVAX, where very good volume inflows are experienced. 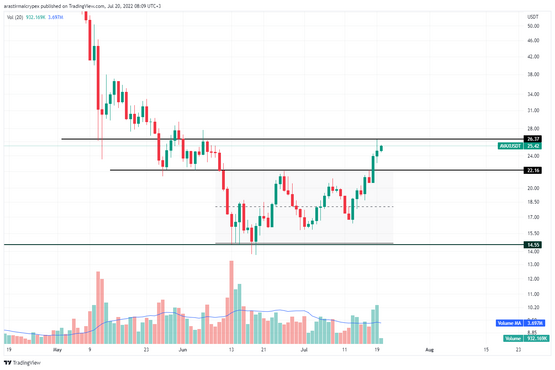 XRP, which gained 1.10% with the morning hours, is priced at $ 0.3770. After twice testing the lower band of the channel it is in, Ripple has risen as of July 14, first breaking the upper band of the channel at 0.3570 and then testing the next target of 0.3771 levels. If Ripple, which is currently above the full resistance level, breaks this level, we can say that its next target will be 0.41. 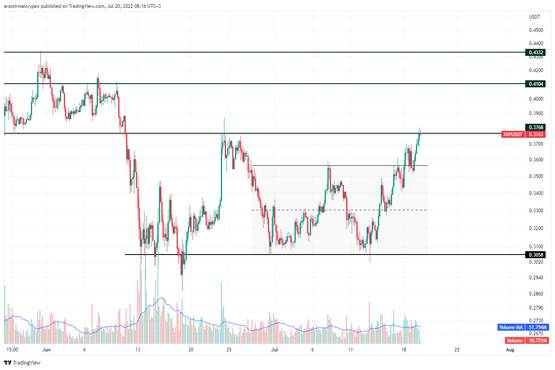 LTC is trading at $58.27, down 0.67% as of morning hours. LTC, which entered an upward trend after falling to $ 46 levels, first returned to the channel and then managed to break the channel mid-band upwards. Despite the rise in the market, it would not be wrong to say that the momentum in LTC was low especially yesterday and could not rise to the expected extent. We can say that the primary target for LTC is $ 60.70 and then it will target $ 64.70. 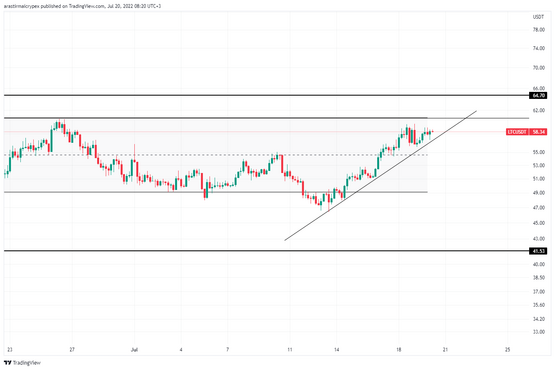 LINK is trading at $7,421, up 2.36% today. LINK, which repeatedly tested the 6.76 level, which turned into a support level after breaking the channel it is in, reached the target region of 7.42 levels with the failure of the breakout. LINK, which is currently testing the resistance level, will target the $8.10 levels in case of a breakout of the region. 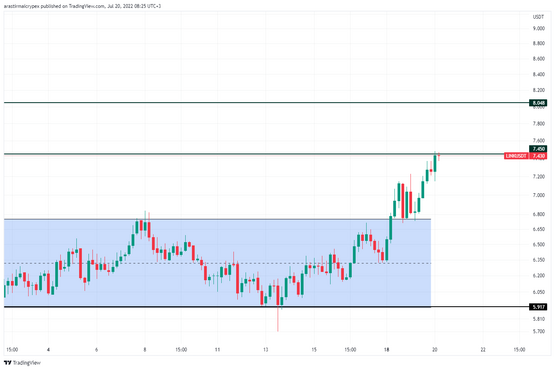 BAT is trading at $0.4365, up 1.53% as of morning hours.  After testing the middle band of the channel it is in, BAT entered an upward trend and reached the upper band of the channel. Although it breaks upwards at the beginning of July, BAT will try to break down with the momentum it receives from the market. 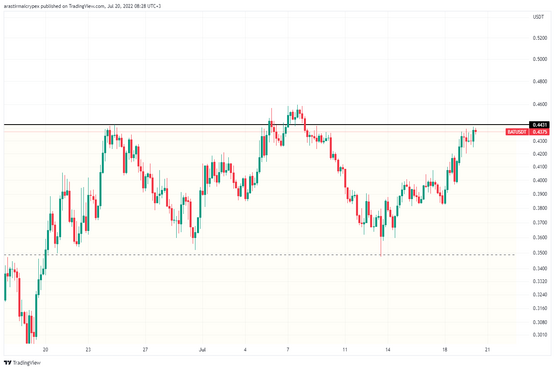