The US state of Louisiana praised Bitcoin for its first decentralized and trillion-dollar market value and argued that it should be encouraged to make the most of Bitcoin's technology.

USA Will Answer ETF Applications in May

The response of the US Securities and Exchange Commission (SEC), led by the new president, Gary Gensler, to Bitcoin ETF applications is a matter of curiosity. The SEC, which has so far examined the ETFs of giant names such as Grayscale, Galaxy Digital, and VanEck, will announce its decisions in the first and second weeks of May.

The SEC’s senior lawyer Jorge Tenreiro has stated that that Ripple rejects providing the documents crucial for working out whether there is any violation of the laws. SEC claims that the XRP transactions were made abroad to a large extent.

South Korea May Shut Down All Exchanges

US President Joe Biden has announced that they are planning to raise capital gains taxes on those who earn a million dollars or more, and raise earnings tax rate to 39.6 percent by nearly doubling. This means that the federal taxes on investment income of US citizens will reach 43.4.

Bitcoin rose above the $53k level from below the $50k level this morning with an 8% increase. Biden's plan to increase the tax deducted from capital gains to 43.4% by almost doubling, caused movement in the market. However, Bitcoin is not a capital asset product and has not been classified in any class. Therefore, the lack of a fundamental or technical reason for this decline, which is based on concerns and cognitive reasons, supports the return movement.

When we consider BTC/USD technically, it continues its movements within the rising channel that has existed since the beginning of 2021. Bitcoin, which dropped to the channel sub-band in the $47,000 zone for a while, recovered and returned to the bullish channel. Currently moving above its 7 and 14-day averages, BTC may want to test the $56,000 level again with the recovery in momentum while not falling below the $52,000 zone. The technical outlook is positive in the daily period and is in an upward channel. 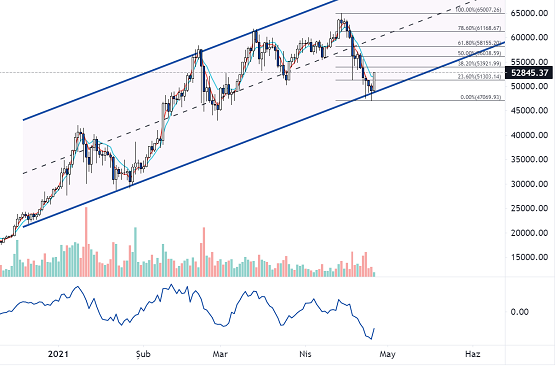 Ethereum continues its rise from where it left off, with a 14% recovery over the past two days. One of the main issues that supported the rise was the fall in ERC20 network fees. In addition, the stake amount in DeFi has started to rise again and DeFi Pulse Index is up 13% daily. When we look at the volume and number of open contracts in Ethereum's CME contracts, it is clear that the demand for Ethereum by institutions is clear. The amount of ETH locked in the ETH 2.0 update, in the price drop, it seems that investors are buying and locking ETH instead of panicking. The amount of ETH withdrawn from exchanges is also starting to increase. Therefore, as the Ethereum 2.0 update continues, the decline in network fees will put Ethereum back to the fore.

When we consider ETH/USD technically, it moves in an upward channel with an image similar to Bitcoin. The view holding the lower band of the bullish channel at $2,150 and above the $2,550 level is at the resistance position. With pricing squeezed between this resistance and the lower channel, there is no room for panic as long as it does not drop below the $2,100 level and there is potential to continue moving towards the $3,000 levels. 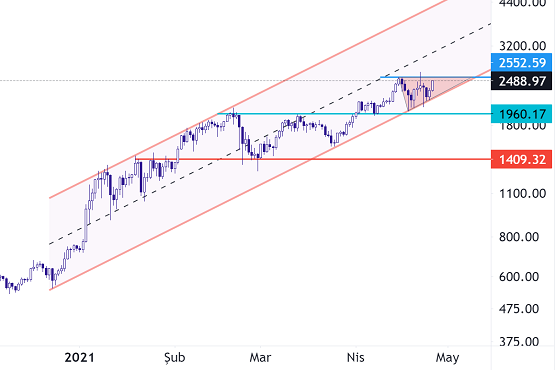 AVAX is pricing at $24.60 this morning, with a daily rise of 14%. Continuing within the horizontal band between $22.00 and $38.00 in March and April, the last response of AVAX came at $21.50, which is the channel sub-band, with an increase of 18% on a daily basis. It is difficult to say that the horizontal course has deteriorated yet, but in the short term, the first steps may be taken for the uptrend. With the $28.00 intermediate support, the strengthening of the buying appetite may allow it to advance to the mid-channel level of $36.00. While Momentum is recovering in the daily period, the MACD indicates that sales are declining and the maturity lines move in the direction of intersection. 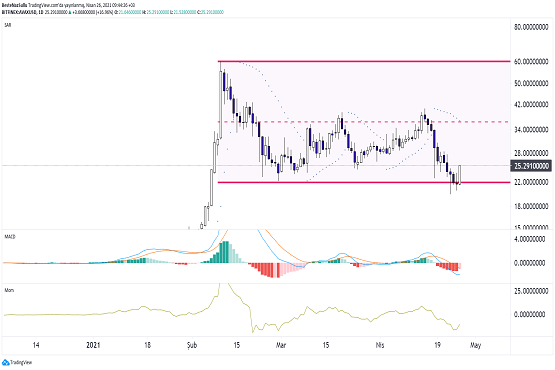 Ripple is pricing around $1.19 this morning, up 15%. Ripple had previously stated that most of the XRP transactions were carried out outside the US. The SEC's current request is to access the transfer records of non-US exchanges and document that XRP is being used to fund Ripple executives. In the teleconference to be held on April 30, the parties will follow the decision to be given by the court. If the court does not approve access to such records, which is a decision in favor of XRP, XPR may be faced with favorable pricing.

If the XRP/USD parity is technically handled, the parity has broken its downtrend that it started after its $1.96 local peak on April 14 and is within the first 4-hour candle. If the candlestick closes above the $1.12 trend, the buying trend can be expected to accelerate. Oscillators give a positive signal within a 4 hour period. Initial resistance for the parity is located at $1.28. 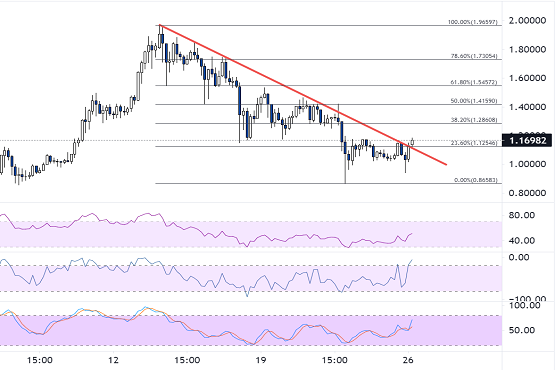 Litecoin is pricing at $243 this morning, up 8%. When the addresses holding Litecoin are analyzed, it is seen that the total addresses holding LTC tend to recover, although the newly opened addresses lose their momentum and decrease the interest on them. Litecoin, which tested the $15 billion level with a sharp retreat after the market capitalization hit $21 billion on April 27, may be accompanied by BTC-led revaluations.

When the LTC/USD parity is examined technically, the parity continues its major movement in the direction of the uptrend, while at the same time it is in a minor downward trend. The support of $245 on the parity, which is pricing above the resistance level of $245, can help both the bearish trend to get rid of the selling pressure and to find a reaction on the strong support. Above $245, the first major resistance is $271 in the Fibo'50 zone. 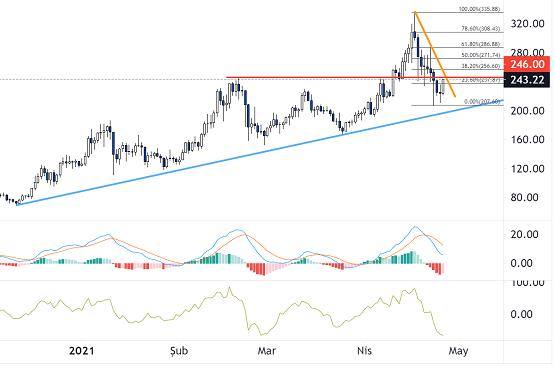 The LINK/USD parity is above the $34.30 level this morning with 8% positive price action. We know that the main purpose of LINK, which stands out with its dynamic NFT studies, is to act as a bridge between payment systems and block chains. It is inevitable that traditional payment methods playing a more active role in the cryptocurrency market after PayPal and Visa's Bitcoin steps will turn into an advantage for Chainlink in the future.

If we take the LINK/USD parity technically, Chainlink, which has been following a sales movement with descending peaks in the last 10 days, completed the daily candlestick close with a doji formation with a reaction from the level of the major uptrend, which is $29.90, and started the return move. For a bullish reaction, the first resistance zone will be watched at $35.40 followed by $37.00. 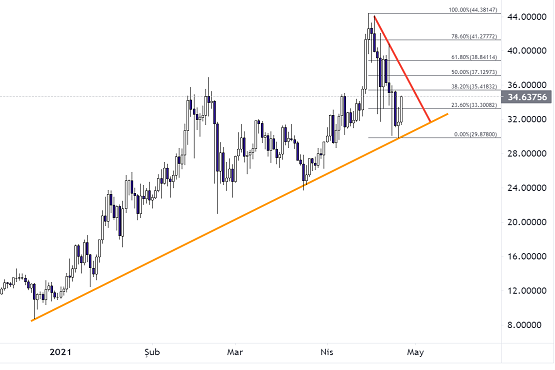 Basic Attention Token is pricing around $1.13, up 10% this morning. Reactions have remained weak so far in the parity, which has not yet recovered from the downtrend, but the parity is below the $1.15 resistance and is on the verge of a trend break. A break, confirmed by 4-hour candlestick closes above $1.15, could push the parity towards the $1.25 resistance. The breakout of the $1.15 level will also complete the confirmation phase for the parity forming a double bottom, creating a formation target of $1.34. The $1.34 level is also the Fibo'61.80 slice. 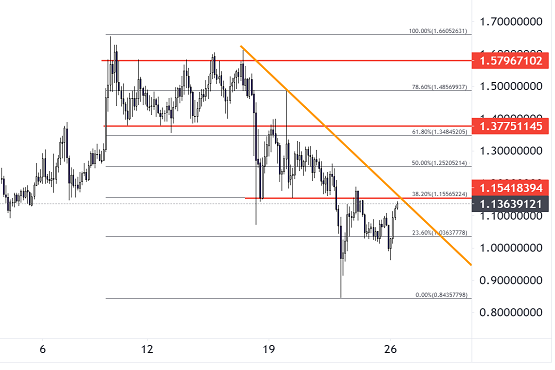