Marvel has announced the launch of a new NFT collection titled "Marvel Mightys Captain America" on The VeVe market.

Powerbridge Technologies, a SaaS solutions and blockchain applications provider traded on the U.S. stock exchange, today announced that it has signed a cooperation agreement with Cryptodigital Holdings for BTC and ETH mining.

Galaxy Digital, which has applied to the SEC to set up an ETF to invest in Bitcoin futures, is similar to VanEck and Invesco, which have filed ETF applications in recent weeks.

UNTOLD, Europe's largest festival, announced this year that it would accept cryptocurrency payments for UNTOLD 2021 tickets.

Investing in Ethereum Blockchain Based Project from TikTok

TikTok has partnered with Audius, the music streaming platform that works on Ethereum blockchains.

Bitcoin, which gained about 1.0 percent in the morning, is priced at $44,933. When we examine chain data for Bitcoin, the 7-day average of net flow volume between exchanges and wallets is still in negative territory. This metric shows that investors are transferring their purchased BTCs into their wallets to keep them medium/long term. However, galaxy digital, which applied to the SEC to establish an ETF to invest in Bitcoin futures, is similar to VanEck and Invesco, which have applied for ETFs in recent weeks, according to a news feed yesterday.

When we consider BTC/USDT parity technically, BTC, which rose to $46,857 yesterday, which corresponds to Fibo'50, wiped out its intraday gains in the afternoon with the resistance it saw from this level, closing daily below its 200-day moving average ($45,524). When we look at the daily period, it appears that as of the daily candle closure yesterday, there was a sell signal on MACD. If Bitcoin starts to be priced back above 200 days with a rapid recovery as it did on August 13th, it will turn the overall market direction back up again. If the withdrawals continue, the $42,500 level is our first level of support. 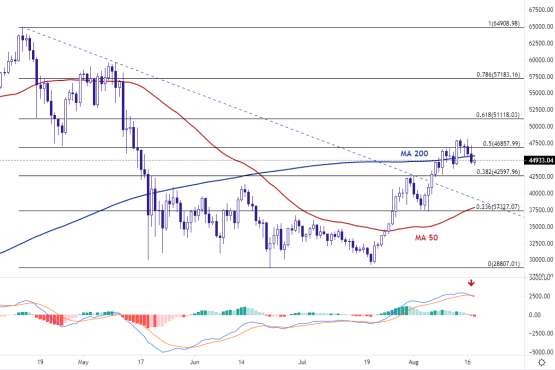 Ethereum, which gained about 1.39 percent in the morning, is priced at $3049. When we check the change in ETH supply since the beginning of the EIP-1559 update, we see that a total of 59,293.64 ETH were burned, with a total value of $184,799,182.99. Considering the ongoing positive news flow for ETH, which is experiencing a relative stabilization in supply, the outlook is positive for the medium and long term.

When we consider the ETH/USDT parity technically, ETH continued its price movement within the existing rising channel as of July 20, breaking the channel sub-band down from $3116 with market-wide retreats that began yesterday when Bitcoin broke its 200-day moving average. When we examined it over a 4-hour period, the sell signal continued on MACD for a long time, but ETH found support from Fibo'23.60, which stood at $2950.56 with the breakage of the channel sub-band. If this level breaks downwards, the initial support is $2712. 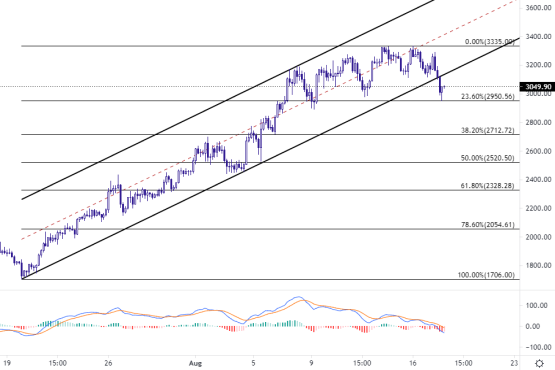 AVAX, which gained about 1.1 percent in the morning, is priced at $23.24. Our category-oriented review (Proof-of-Stake) for AVAX, where positive news flow continued, such as the recent launch of a decentralized exchange called Dexalot on the Avalanche platform, returned behind the category average. The outlook for AVAX, which closed this discount yesterday with rapid rises, is positive in the medium and long term.

When we examine the AVAX/USDT pair technically, AVAX, which is priced above its current rising trend as of July 20, still retains its MACD positive outlook over the daily period. As we noted in yesterday morning's bulletin, our initial target price was $23.10, which is the 200-day moving average. The AVAX rose to $25.5 yesterday, with a sharp intraday upward movement, but closed just above its 200-day moving average. For AVAX, it's important that it holds on to its 200-day average for the short-term continuity of rises. 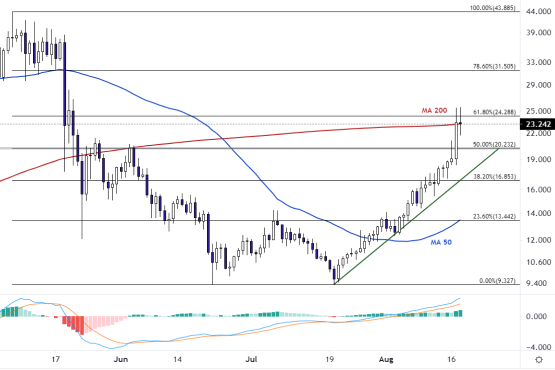 Ripple, which gained about 1.25 percent in the morning, is priced at $1,111. When we consider the XRP/USDT parity in technical terms, XRP, which was positively priced in the morning with the positive news flow during the litigation process between Ripple and the SEC yesterday, experienced a withdrawal by wiping out its intraday gains. As we noted in the daily bulletin yesterday, we expected the withdrawals for XRP, which has delivered a return of about 160 percent with recent sharp rises, to find support at $1,065 if sustained, and XRP, which tested the Fibo's $38.20 tranche with the daily candle opening today, continues the day with positive pricing with its support. When we examine it in the daily period, we see that the MACD continues to signal the al. If the daily close below $1,065 comes in, it is expected to buck the falling major trend at $0.98. 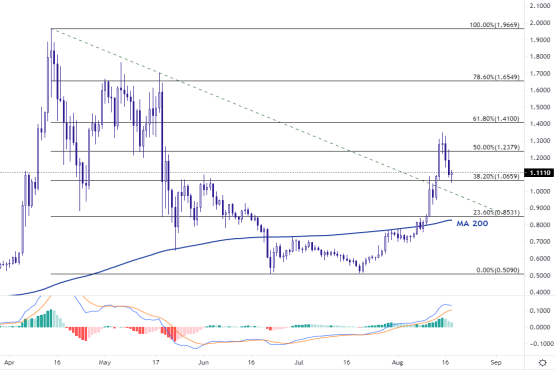 LTC, which dominates the horizontal price movement in the morning, is priced at $168.23. When we consider the LTC/USDT parity technically, LTC, which continues to be priced within the existing rising channel as of July 20, broke the channel sub-band down at $168 with the daily candle opening and experienced a retreat towards the $160 levels mentioned in the bulletin yesterday. LTC, which experienced a rapid recovery with the support it found here, carried out the 4-hour candle closure in the channel. MACD, where we talk about negative mismatch over a 4-hour period, maintains the sell signal. If support at $164 is lost, the next level of support is $150. 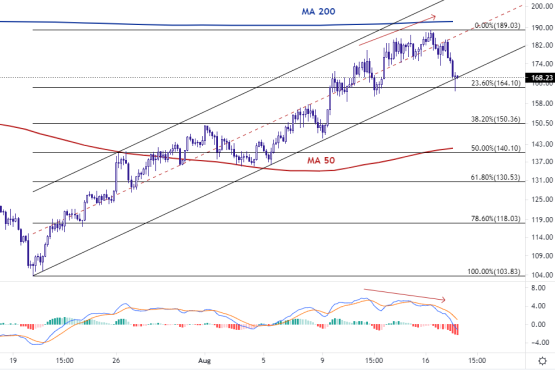 LINK, which lost about 0.4 percent in the morning, is priced at $26.06. When we examine the LINK/USDT parity technically in a 4-hour period, LINK continued its price movement within the existing rising channel as of July 20, breaking the channel sub-band down from $27.6 and falling to $25.12 from Fibo's 23.60 tranche, with market-wide retreats yesterday as BTC broke its 200-day moving average downwards. When we examine it in a 4-hour period, even if it continues to sell stock, there is a recovery in this metric in the oversold zone. If LINK can hold above $25.12, there will be price rebounds along with the buy signal from the stock. 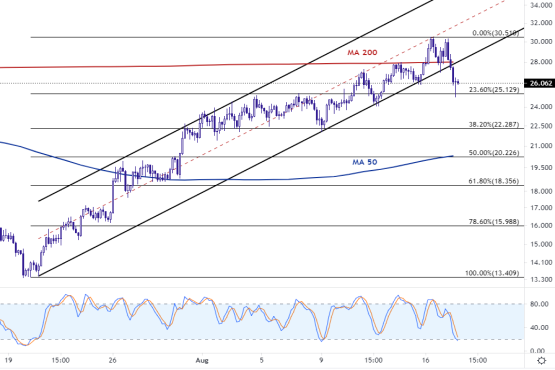 BAT, which lost about 1.5 percent in the morning, is priced at $0.723. BAT, which was priced above its existing rising trend as of July 20th when we consider BAT/USDT parity technically, tested its 200-day moving average ($0.813) again yesterday and broke its rising trend downwards with the resistance it saw. BAT, which continued its retreat with the breakdown, found support at $0.71, the level of support we indicated in the bulletin yesterday. During the daily period, MACD appears to be maintaining the buy signal, but if intraday losses are sustained, a sell signal is expected. If the $0.71 support level is lost, the 50-day moving average may experience correct retreats. 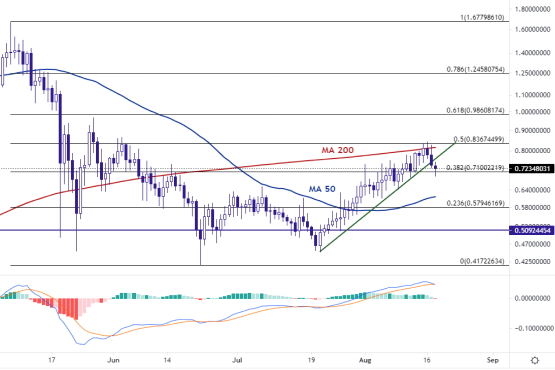