Sotheby’s Will Accept Payment in BTC and ETH

Sotheby’s, one of the biggest fine arts auction houses around the world, has announced that they will accept Bitcoin and Ethereum as payment for Banksy’s iconic artwork “Love is in the Air”.

40% of the Mastercard Clients Want to Pay in Cryptocurrencies

The survey conducted by the USA based finance giant Mastercard with 15,563 participants has revealed that 40% of its clients want to pay with their crypto assets in the following year. The company has already stated that they will start to support cryptocurrencies before the end of the year.

Upon the panic sales following the US Treasury Minister Yellen’s statements about the potential raise in interest rate, the treasury secretary had to make another statement that the rate hike is not something expected or recommended.

The judge had previously ruled in favor of Ripple for the SEC to deliver documents related to Bitcoin, Ethereum and XRP. However, the SEC stated that they do not have any documentation regarding the cryptocurrencies in question. Judge Netburn concludes that Ripple has increased its defense, while the Ripple defense team emphasizes the crucial importance of understanding how the SEC determines the securities classifications.

SmartZip Will Launch Its Own Chainlink Nodes

SReal estate data analysis company SmartZip has announced that they will join the decentralized oracle network by setting up their own Chainlink nodes.

Yesterday evening, the markets received the message from Treasury Secretary Janet Yellen that the expansionary measures called interest rate hike or tapering could cease and even tightening policies called withdrawal from the market could be adopted in response to the warming of the economy. While Bitcoin fell to the $52,000 zone, it recovered quickly after Yellen's second statement. Traded with a 2% increase in value this morning, Bitcoin is in the $54,200 zone. However, we cannot see the data to support this in the market where concerns are increasing and low-level targets are spoken. While BTCs accumulated in miners' pools reached the highest level in four months, stablecoin amounts in stock exchanges continue to increase. On the other hand, BTC dominance dropped by 1% compared to yesterday to 45.8%.

When we consider BTC/USD technically, movement continues within the current channel. The fact that Bitcoin, which tests the Bolllinger sub-band in a four-hour period, remains above the $54,000 zone will open up reactions to the $56,000 band again. Although we do not see a negative technical outlook, we can expect it to hold on to this area unless additional news comes in.

Ethereum is trading at $3,265 this morning, with some profit taking after hitting the record at $3,535. Although we do not see any deterioration in the basis of Ethereum, we see that it is more technical at the moment. Since the network transaction fees remain low after the Berlin hard fork will keep the ERC20 alive, ERC20 tokens, especially Ethereum, will be at the forefront.

When we analyzed the ETH/USD technically, trend positivity in our terminal was 100% for the last two days. As we have stated in our Crypto Zoom programs, such a persistence is not possible quantitatively and it is the peak symptoms. In the new look, when ETH's negative mismatch with 4-hour momentum and MACD is combined with the descending triangle formation, $3,200 and $3,025 levels may come to the fore. Although profit realizations are expected for now, the main trend and the secondary trend are in the upward direction. Therefore, support levels can be evaluated. 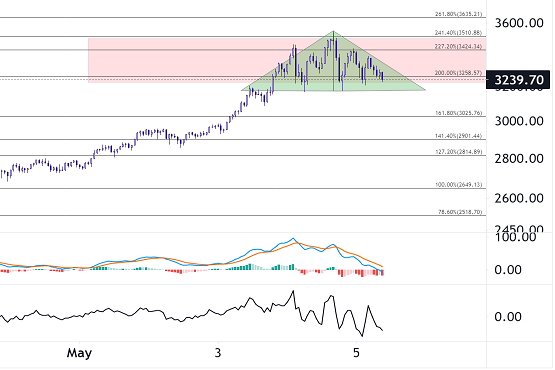 AVAX/USD parity is priced in the zone of $31.00 this morning with a 3% price increase. This level, where buy and sell volumes are at par with the weak reactions over the support of $30.30, can also be in preparation for a strong reaction environment for the rises as long as persistence is maintained. While downside swings will create a weakness for pricing, initial resistance for bullish reactions is in the $32.70 zone and then in the $36.00 zone. While the MACD bars confirmed the sales pressures in the 4-hour period, the overlap in the purchasing direction was achieved in the hourly period. Although CCI and momentum give a horizontal signal, they are in the positive zone. 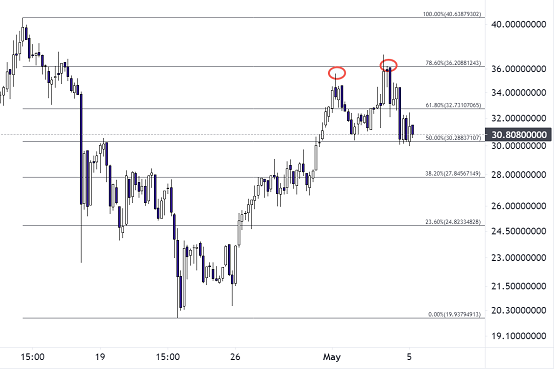 The XRP/USD parity is pricing in the $1.43 zone, up 3% this morning. Although the SEC, which decided to hold a meeting for May 6, reiterates that the meeting is closed to the press, it is a matter of curiosity that a divergence involving Gensler will evolve in favor of Ripple. The judge had previously made a pro-Ripple decision for the submission of SEC's BTC and ETH documents. The SEC, on the other hand, stating that they have no documents regarding Bitcoin and Ethereum, weakens the most critical trump card in Ripple's defense. On the other hand, Ripple announced in its current statement that the former US treasurer has joined the company's management team.

If the XRP/USD parity is taken into consideration technically, the parity has disrupted its course in the upward channel with the correction movement experienced in Bitcoin. It is important that this level becomes support for the parity, which is about to complete the 4-hour candlestick close above the Fibo level of $1.41. Then it may want to be included within the boundaries of the ascension channel. The initial resistance for the parity is located above $1.54, while the middle band of the channel is located in the $1.23 zone. 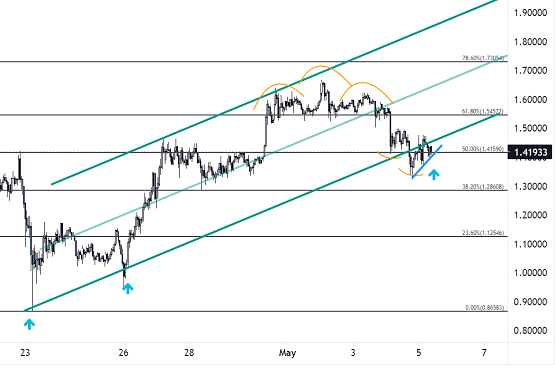 Litecoin is up 6.5% this morning at around $325. With the decline of Bitcoin dominance, the money movement concentrated in the altcoin market, and Ethereum and other major units came to the fore. Thus, the correlation of Litecoin with BTC was weakened, and Ethereum was able to obtain referenced returns and provided a monthly return of 50 points.

When the LTC/USD parity is considered technically, the parity did not disrupt its course in the rising channel that it started in December, but remained in the middle-lower zone of the channel in March and April. On the daily chart, the parity is located at the level of the channel mid-band in the $325 zone. Persistence above this level will set the upper channel targets of $460 for LTC/USD. But for the shorter term, the $340 and $410 Fibonacci resistances need to be followed. The momentum is trending upwards while the MACD remains positive on the buying direction. We will be following the $306 support in retracements. 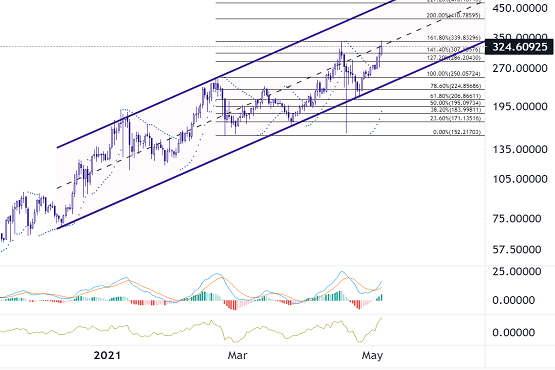 Chainlink is pricing around $50.00 this morning, up 9%. The earnings gap between LINK and ETH, which reached 60% of Ethereum's monthly returns, which is the largest ERC20 token in the market value, was widened. As ETH continued to rise, supported by strong corporate purchases, LINK wanted to close the gap. On the basis of monthly returns, LINK maintains its potential of 6%. On the other hand, Chainlink, which forms a new partnership with SmartZip, will transfer real estate data to its own nodes. Thus, the real estate market is also integrated into the block chain through Chainlink.

Technically speaking, the LINK/USD parity saw some sales in the $43.80 minor channel upper band, but it broke strongly with buying volume prevailing. It then achieved pricing above the upper band of the major bullish channel at $48.00. Confirming its permanence with the support of the $48.00 band, the next resistance levels of the parity are $50.40 and $53.00, while the return gap analysis confirms the potential. However, we are maintaining our $60 target. 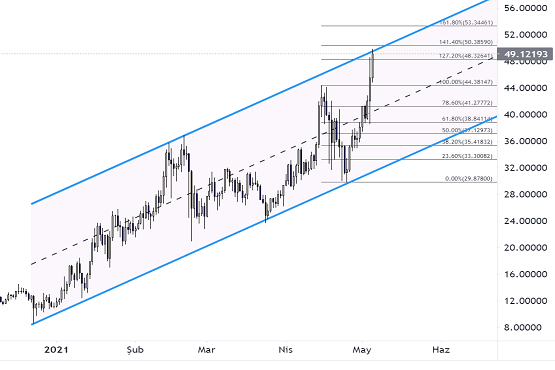 Basic Attention Token is listed at around $1.21, up 4% this morning. Following Yellen's statements, the BAT/USD parity followed the Bitcoin pricing with retractions, weakening the $1.21 channel lower band, causing a downward swing. Their current pricing was able to compensate for their losses with response purchases arising from the $1.15 support. Stability above $1.25 will allow it to be within the channel boundaries again, while Fibo'50 slice above $1.25 will be exceeded. The channel middle band in the $1.35 zone is also above the Fibo 61.80 retracement, while there is no critical resistance for the parity on the $1.35 journey. Unless there is a disruptive effect across the market, the outlook for the short term is positive and ready for bullish reactions. 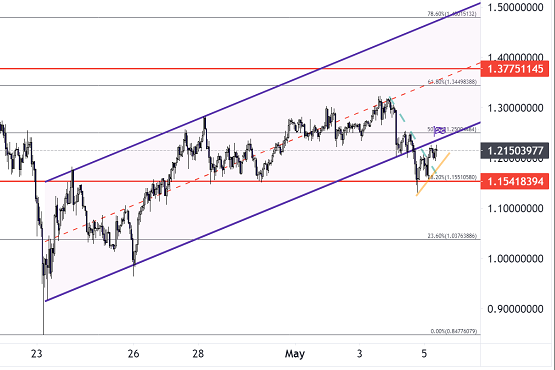