Mastercard Will Accept Payment With Cryptocurrencies

Payment giant Mastercard has announced that it will take an important step in the sector and planning to integrate the payment system with cryptocurrencies in the businesses where Mastercard has passed.

Real Estate Sales in Turkey to do with Bitcoin

Developments in the use of Bitcoin as a payment method in many areas of life have also reflected in the Turkish construction industry, and a construction company announced that they have developed an online payment platform that enables home sales with Bitcoin.

Speaking to CNBC, Twitter Chief Finance(CFO) Manager Segal said employees are considering how to add Bitcoin to their reserves if they accept payments in Bitcoin or if a seller requests payments in Bitcoin. Thus, the company has shown that plans are ready to implement the Bitcoin payment system.

Lagarde: It Will Take Time For Us to Worry About Inflation

European Central Bank (ECB) President Lagarde made statements that monetary expansion will continue. Explaining that inflation concerns have been postponed for the time being, ECB President stated that they are far from inflation targets yet and that the expansionary policy will continue.

CBDC Will Be Spoken At The G7 Meeting
It was announced that the Central Bank Digital currencies will be discussed at the G7 summit, which will be held by the top 7 countries with the world's largest economy. At the meeting to be held on February 12, digital taxation practice and debt issues will also be discussed.

The total value of locked-in assets in the Decentralized Finance (DeFi) sector reached a record $ 39.79 billion. The DeFi sector continues to grow, with both the increasing number of locked assets and the increase in the value of cryptocurrencies.

Russia Purchases Massive Bitcoin Mining Device
A senior manager of BitRiver, one of the largest Crypto mining companies in Russia, reported that a customer has purchased more than 20,000 mining devices. BitRiver CEO stated that these imported devices are the largest mining hardware in Russia.

Bitcoin is trading at $ 44,800 this morning, with a loss close to 1%. There is a 30-point difference between BTC and ETH in the monthly yield spike, and this point may result in a correction in favor of BTC or by ETH. According to on chain data, there has been an increase in the amount of BTC held in exchanges for the last three days, and the increase in the number of active addresses has slowed for the last two days. In this case, while chain data for BTC signals that there may be a profit sale, we are currently 6% behind the peak. On the other hand, Mastercard has announced on its official page that it will add crypto coins this year. The number of people who want to get a share of the pie against the limited supply in Bitcoin is increasing.

When we consider BTC / USD technically, the flag formation continues in the daily period. On the other hand, as the four-hour uptrend crosses the $ 42,000 level, this correction must be formed for the trend to function properly. Therefore, it is useful to pay attention to the support levels. The trend is still more positive, although the outlook is slightly retracting. 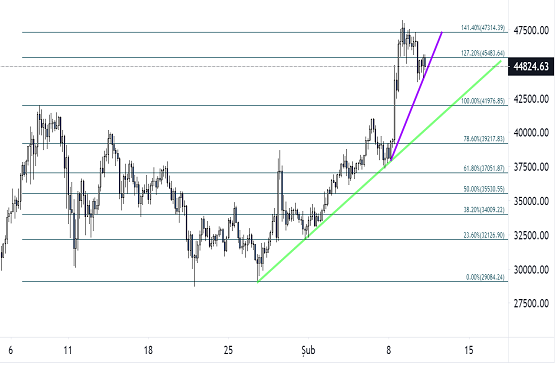 While Ethereum lost close to 1% in the morning hours, the increase in mining fees due to the increasing network density in recent days signaled profit sales for ETH. Although the number of Ethereum active addresses increased, some profit sales occurred in high balance wallets. Profit sales throughout the market are quite normal that all the parities in our tracking have reached their target levels. An appetite for rest, pause or profit can be formed in accordance with the investor psychology. In the current situation, after reiterating the network density, fees and Yellen's remarks that cryptocurrencies finance terrorism, the market has found time to pause. While there is currently no fundamental story distortion regarding Ethereum, the basic image is positive except for network charges.

When we consider ETH / USD technically, the rising wedge formation started to come into question. If the $ 1685 level breaks down, the $ 1550-1600 levels that the trend has passed may come into play, but the $ 1680 and $ 1650 levels are strong range. For this reason, it may be wrong to focus on declining transactions before breaking, ie without confirmation. While the outlook is for some profit sales, the major and secondary trend is up. 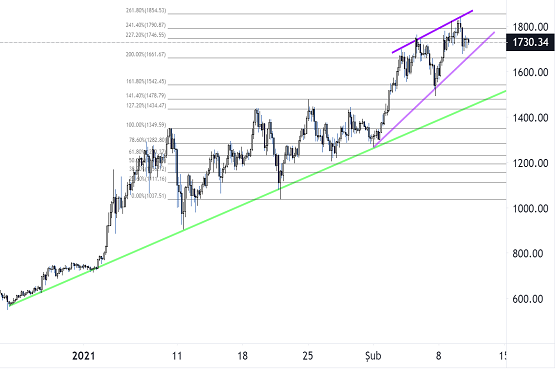 AVAX has become the most positively differentiated and remarkable coin of the week among cryptocurrencies, with a price gain of 260% in the last week. AVAX attracted a lot of attention with the increase in ETH transaction costs and the Ethereum Bridge project they developed, on the other hand, the returns generated by staking AVAX over DeFi; very attractive for users. However, the situations in the Avalanche platform, where access and transfer problems are seen this morning due to congestion and disruptions due to network density in AVAX, may reflect on AVAX, it is useful to be cautious.

When the AVAX / USD parity is analyzed technically, it is seen that it has increased horizontally this morning and priced around $ 56.30. In the general market decline the previous day, AVAX saw $ 42.00 again and then rebounded the record at $ 60.00 with a 33% response. The trading volume indicator used in the 4-hour chart shows that sales are also intensive, but demand is still dominant. MACD gives a positive signal. 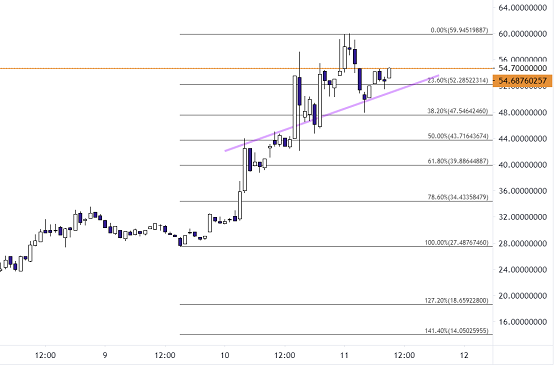 Ripple is pricing at $ 0.5260 this morning, up 2.4%. The first hearing of his lawsuit with the SEC is scheduled for February 22nd, and Ripple is doing well for now. Nevertheless, this upcoming critical day remains important and still poses a risk to investors. But Ripple's strengthening of its defense authority with the evidence and number of lawyers (22) has not been seen to negatively affect XRP prices in the near-case period.

As technically XRP / USD, it is seen that the price is above the $ 0.4970 support. While the double bottom target is retested at $ 0.53, the rising triangle formation in the range of $ 0.30-0.50 supports the rise towards $ 0.70 levels. Therefore, while the $ 0.47 and $ 0.50 levels support the pullbacks, it is useful to be cautious on the positions while targeting the rise in XRP due to its underlying data. 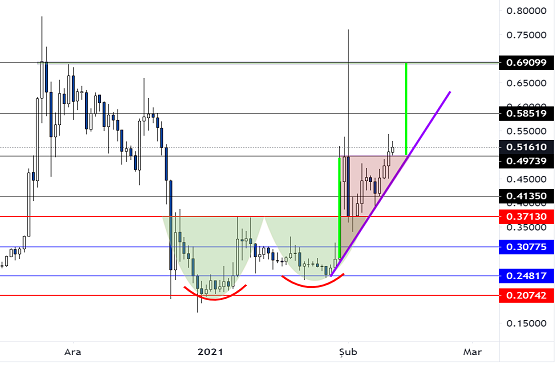 Litecoin is pricing at $ 182 this morning, with a horizontal increase. In the announcement made the previous day, it was announced that the integration of Litecoin Card into Litecoinwallet will take place within a few weeks. This shows that Litecoin users can convert the Litecoins they own on this card into dollars within minutes. Litecoin, one of the cryptocurrencies with the highest correlation with BTC, is ahead of Bitcoin on the basis of weekly and monthly returns. Although this is a leading signal for Bitcoin, the question of how the desire to close the gap will deteriorate may signal a calmer course for Litecoin.

When the LTC / USD pair is technically analyzed, the retracement experienced in the general market the previous day was also negative for Litecoin, and prices remained below the $ 183 support zone. Afterwards, the increases were not strong and this level became a resistance zone for prices. The volume-confirmed break of $ 183 may bring the $ 200 level to the agenda, but in the 4-hour period the MACD is showing a decrease in buying appetite and the bars started to form in the negative zone. Momentum is very close to the resistance zone and is unstable. 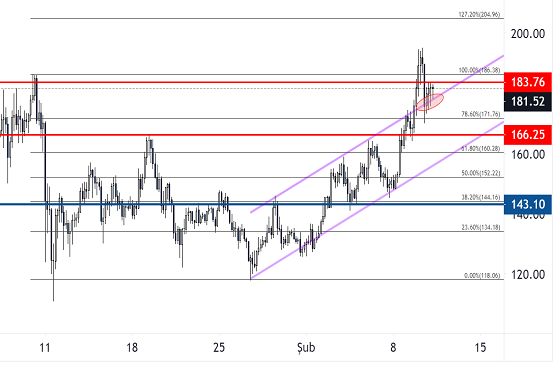 LINK is listed at $ 27.30 this morning, up 1.6%. Although it has retraced by 10% after the $ 28.65 record it tested the previous day, the doji candles formed in the 4-hour period indicate indecision. Expansionary monetary policies will continue, as can be seen from the statements of both the European Central Bank and the Fed, which diminishes monetary concerns and increases risk appetite in the market. For this reason, we see that LINK, which is still very suitable for long-term investments, is stable even if its daily changes are limited.

When we consider the LINK / USD parity technically, we see that the uptrend continues as a channel. Although it lags behind the market in terms of return, we think it follows a healthier trend in terms of stability and trend slope. Saying the stability coin may not be wrong right now. Currently, the parabolic SAR is on sale in a four-hour period. In retracements, the lower channel is above $ 26.05. 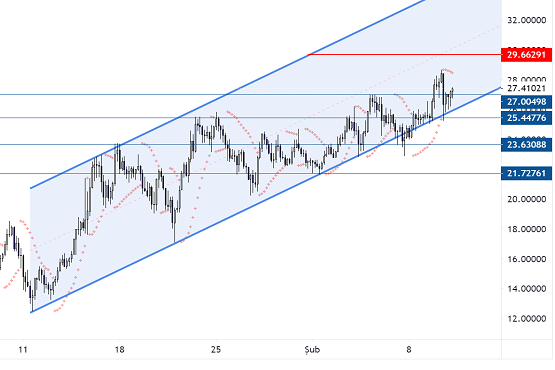 BAT / USD parity is pricing with a percentage increase close to 1% this morning. In BAT, which has performed well in recent days, this performance has turned into a rising channel on an hourly basis. Thus, we see channels within the channel both in daily and hourly periods. While the intersection of both channels is in the range of $ 0.49-0.50, the targets for BAT, which stands out with its project, can move to $ 0.70 with a break of $ 0.50. The outlook is positive, the first stop should be watched for possible profit sales in the $ 0.49-0.50 range. 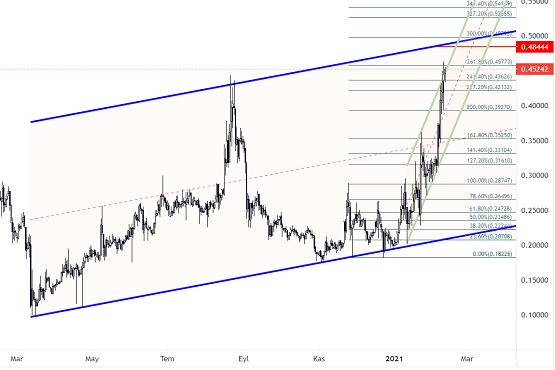