The open positions of BTC options have increased by 118% in the last 2 months to $ 8.4 billion, while Bitcoin broke a record. On January 29, contracts with a total value of 3.8 billion dollars will expire. Contracts worth $ 3.8 billion correspond to 35% of BTC's daily spot volume.

US elected president Joe Biden has officially announced the appointment of Gary Gensler as President of the US Securities Exchange Commission. Gensler is a professor known for his previous education on blockchain and cryptocurrencies. This situation, which is very well welcomed by crypto money lovers, also pleased XRP investors.

In a program he attended, Guggenheim CEO Scott Minerd argued that Bitcoin is a more valuable asset than gold with its limited supply and easy-to-carry feature. In addition, referring to the ease of paying with Bitcoin, he cited Russell Okung, who received his salary in Bitcoin.

AC Milan Is Also Releasing Its Own Token

AC Milan, one of Italy's long-established and big clubs, announced that it will issue its own token. The token, which will be launched under the name ACM, is expected to be issued in the coming weeks. Thus, ACM token holders will be able to have rights such as voting, vip rewards and experiences, and promotions.

Osprey Funds To Build A Bitcoin Fund To Rival Grayscale

Osprey Funds announced that it has created a BTC custody service called Osprey Bitcoin Trust Fund. The fund, which will go into operation with the OBTC abbreviation next week, set much lower interest rates compared to Grayscale. It is expected that there will be great interest for investors complaining about Grayscale's high commissions. Under the OBTC fund, the assets will remain locked for 12 months.

Blockchain firm Ripple is hiring a new engineering director to lead the team that created the open source developer services for payment platform RippleX. The main purpose of RippleX, Ripple's own developer platform, was to be able to use the java language in the XRP Ledger network. 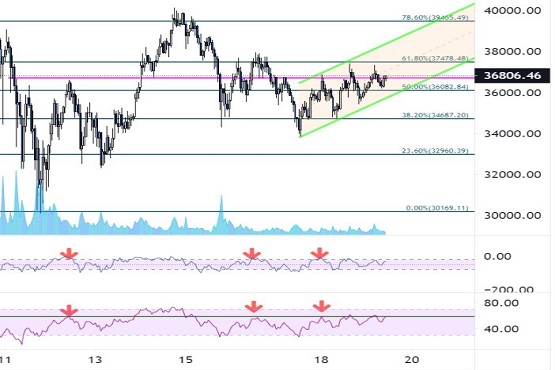 Ethereum began to move with the decline of Bitcoin dominance and the rise in the DeFi index. Ethereum, in terms of the project it hosts, is based on smart contracts for network operation. That's why LINK's record breaking was a pioneer for ETH as well. This morning, ETH, which was traded at $ 1330 with a value gain of nearly 6%, is 5% from the $ 1400 peak. With the decrease in miner fees, it seems that there is no metric left that can be an obstacle in ETH. While the amount of ETH withdrawn from the exchanges is also increasing, all these data support the rise of ETH.

When we consider ETH / USD technically, if the price continuing in the bullish channel in the four-hour period can break the $ 1400 record, it has an 8% higher movement area than the Fibo retracement levels and points to the range of $ 1470-1480. However, in the short term, the focus should be on the upper band of the channel, which also passes through the $ 1415 zone. Therefore, our resistance will be $ 1350 during the day we focus on record levels. If this place is broken, we will be very close to the record levels in ETH after 1100 days. 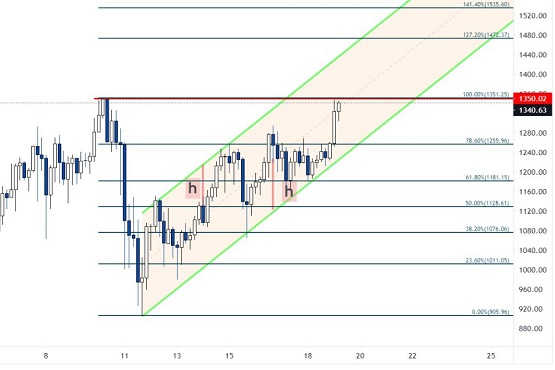 We see that shapes such as support-resistance or linear trend are useless due to the slope recorded recently in AVAX. So Gann Fanns and Fibonacci combinations seem to work better. In such a technique, trend slopes come into play and come to the fore. When we consider AVAX / USD in this way; With the break of $ 13.90, we moved out of the 38.2% green Fann curve and focused on a lower curve and also the $ 11.70 region, which corresponds to the Fibo‘50 level on the horizontal plane. Because AVAX, which has a potential of 7% in its rise and an 8% downward potential in its fall, is at the middle point. If $ 13.60 is not broken, it can pull back and start the down turn. 13.60 resistance and 11.70 our support levels. 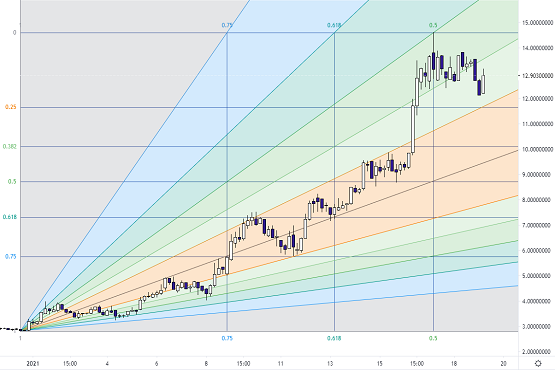 Joe Biden officially announced the appointment of Gery Gensler as SEC chairman in the announcement the day before. Gensler is a very knowledgeable crypto lover who has lectured on blockchain and cryptocurrencies. However, we do not think that Gensler will have a say in the Ripple case, or can influence it, as it goes from the SEC to the judiciary, when we consider it on the basis of normal legal states. In XRP, we are seeing the consolidation to compensate for the 40% minus on a monthly basis as the worst is left behind and there is no worse news flow. When we look at the situation of XRP compared to other crypto currencies rather than investor expectations, it is seen that other coins have come to the brink of losing the success of being the top 5 crypto currencies that they have protected for 7 years after the increase in value. Data from the news feed shows that former ripple co-founder Jed MacCaleb has resumed sales of XRP. Considering that MacCaleb has approximately 3 billion XRPs, the fear of market manipulation continues for XRP, which has not yet fully recovered from sales pressures.

When the XRP / USD parity is examined technically, the double bottom formation will confirm with the prices rising to the $ 0.36 level and then exceeding the upside. Confirmation may bring up the $ 0.50 zones with a double bottom target. Still, the risks standing on the table should be addressed days before the case on February 22nd. For this reason, a break confirmation of 0.36 $ should definitely be seen for the $ 0.50 target. 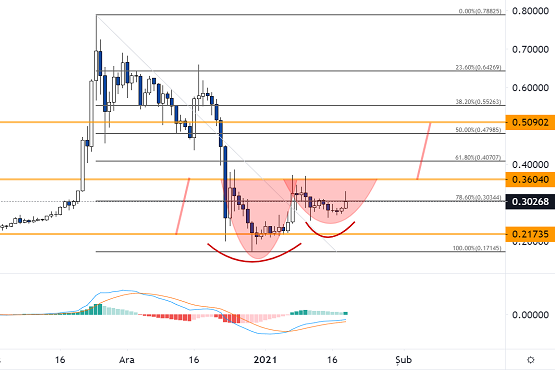 Litecoin, which we have been paying attention to for days and stated that the prices it deserves with its strong infrastructure are higher, continues to gain value in the upward trend. Although the volatile moves of Bitcoin in the last weeks confused, suggesting that BTC is accelerating, when the monthly returns are considered, Litecoin remains 18% below Bitcoin, which increased by 56%. We think this premium shear will close as the correlation with BTC is still high.

When the LTC / USD pair is technically examined, Litecoin, which is still 60% away from its record in 2017, is following a very positive trend on the uptrend. The pair, which broke the $ 155 resistance upwards, is priced around $ 160 at the time of writing. Litecoin, which attracts the attention of investors by increasing its market value in the continuation of the upward movement, does not have any resistance up to $ 187 and the way is open. If it holds around $ 187, the positive trend may continue for the price that made this level a support point. Looking at the indicators, it is seen that the Stochastic indicator is in the buy position but in resistance, in addition to Williams% R and RSI in the buy position. 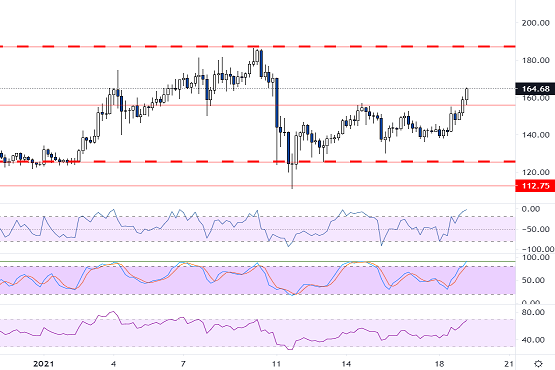 The LINK / USD pair became one of the best exiting pairs on a weekly basis. Priced at $ 21.00 in the morning, LINK doubled its market value by 2021 and managed to rise to the ninth largest cryptocurrency position. With a 66% increase in monthly returns and a 56% increase in weekly returns, it has made most of its gains in the last seven days. The recent increase of LINK, a token with Ethereum consensus, has opened the gap with Ethereum, showing premium pricing. This rapid increase may leave its place to a period of calm and idle for a while. After the Ethereum move, a new move can be expected from LINK. 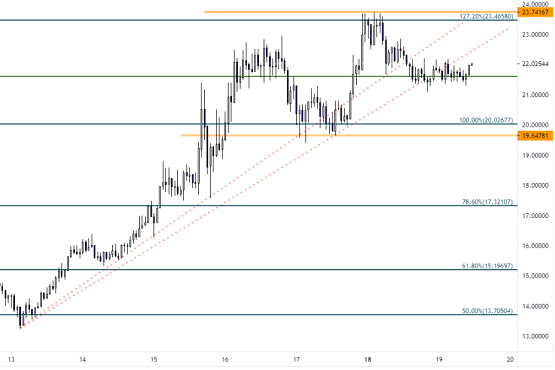 BAT / USD parity has become one of the pairs that has made quite successful exits with the projects and updates it has been involved in in recent months. The fact that it includes qualities similar to privacy coins in its project and stands out with e-commerce marketing positively reflects on parity in the macro part. The $ 0.29 zone, where retracements came, will be followed after the Fibo 'tested earlier, with a break of the 0.26 level corresponding to its 78.60 correction. If the sales in these regions do not suppress the price and the permanence for the BAT / USD parity is achieved, the upper band of the channel, $ 0.30, may be on the agenda. 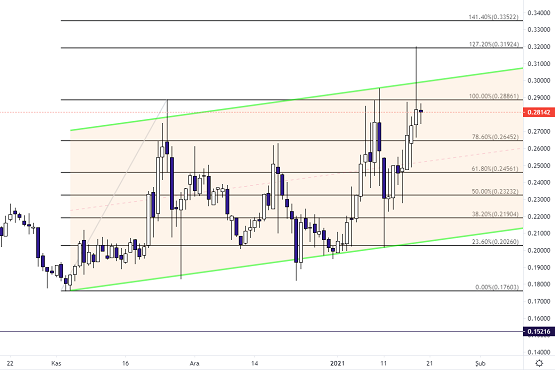