Miami Mayor Francis Suarez said he was not surprised by Treasury Secretary Yellen's recent statements. In addition, "What is attractive to people who invest in Bitcoin is that it is precisely that it is not supported by a central government. So it cannot be manipulated by the central government." made the explanations.

Asset Management Company Stone Ridge Establishes BTC Fund
Stone Ridge, a New York-based company with $ 13 billion in assets under its auspices, has applied to the US Securities Commission (SEC) to purchase Bitcoin.

According to Reuteurs' exclusive report, Goldman Sachs will launch Bitcoin futures for its clients starting next week. In the work to be done, research on blockchain technology and CBDCs as well as Bitcoin trading will continue.

Citibank: BTC May Be the Preferred Currency for International Trade

Citibank analysts, who previously set a target of $ 318,000 for Bitcoin, stated that BTC is an important milestone in the current article they published on cryptocurrencies. According to the bank, Bitcoin is rapidly moving towards becoming a mainstream currency.

Luxury Car Brand Accepts Crypto Payments
Mazzanti, the Italian supercar manufacturer, has become the first automobile brand in the world to raise funds with cryptocurrencies and provide revenue share to its investors with STO. In addition, the company allows all versions of the model called Evantra to be paid in Bitcoin.

Ministry of Finance Made a Statement on Cryptocurrencies

T.R. Treasury and Finance Ministry a statement indicating that the cryptographic developments on issues related to Turkey's crypto followed the money and the situation in the money released. He stated that CBRT, BRSA, CMB and other relevant institutions are working on cryptocurrencies in cooperation.

Rakuten, known as the Amazon of Japan; announced that customers can now use cryptocurrencies such as Bitcoin, Ethereum, and Bitcoin Cash. With the support of crypto assets, the payment service covers a wide range of products.

Wietse Wind, founder of XRP Labs, announced the work to add NFT to its XRP Ledger. Witse Wind also emphasized that NFT transactions on the XRP Ledger will work differently than transactions on other blockchains such as Ethereum.

The U.S. Securities and Exchange Commission (SEC) has released an eight-page document detailing the framework under which it will examine digital asset investments. According to the released document, the SEC has made it clear that digital assets will face similar levels of scrutiny as traditional securities.

Bitcoin rose to the $ 50,300 level with the arrival of bottom buyers at $ 43,000. Although there has been an increase in the number of active and new addresses in the last 24 hours, the interest rates (premiums) of indefinite contracts are still very low. This situation shows that the recent rise is not in a strong preparation. The strong signal coming from the bottom levels did not occur in the 50 thousand rise. For this reason, profit sales may be in question as a strong upward signal is not seen in on chain data for BTC. However, these data should not be interpreted as that BTC will fall, but simply as not confirming the strong rise.

When we take the BTC / USD pair technically, it supports the momentum rise in the four-hour period. The descending trend from the record level of 58 thousand has also been broken. Thus, even if the biggest selling factor is eliminated, the sales pressure over 50 thousand shows that we are still not leaving the horizontal trading strategy. For this reason, it is worth paying attention to the interim supports of 48,000 and 46,300 $ in withdrawals. We are watching for possible upstream reactions in retreats. 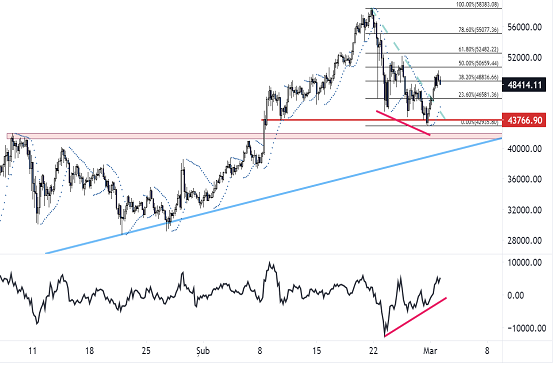 Ethereum is trading this morning at over $ 1500, close to 2%. In Ethereum analysis, we are currently paying attention to the ETH-BTC clipper. The ETH-BTC clipper is at baseline points on the chart and supports the ETH / altcoin movement. According to on chain data, the number of active ETH and newly opened addresses increased in the last 24 hours. If we consider the MVRV (Market Value / Realized Value) ratio as PD / DD, it shows that we have historically reached "discounted" levels. Therefore, it turns out that Ethereum prices are at reasonable levels in on chain data.

When we consider the ETH / USD parity technically, the descending trend from the $ 2040 level was broken yesterday, but it was not broken. Momentum confirms the uptrend in the 4 hour period. In possible withdrawals, although the confirmation or formation has not yet been completed, we can get bottom approval with a TOBO-like appearance. The range of $ 1470-1580 will be followed during the day. The view is horizontal but in positive transformation. 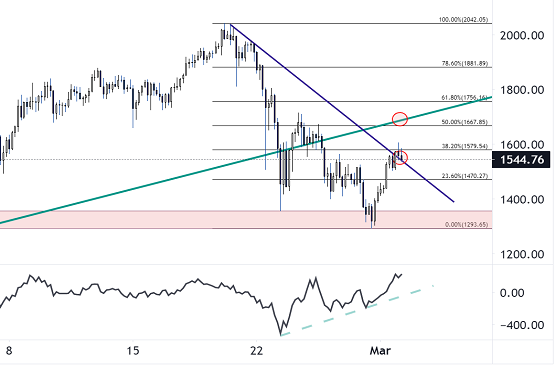 AVAX / USD is trading with 3.4% sellers this morning. AVAX, which approached the $ 30 level with a 10% exit yesterday, faced sales from here and moved back to $ 26. After the Pangolin update, the problems that arise while it is expected to bridge the Ethereum network and the unlocking of new AVAXs on March 9 may cause price movements in AVAX this week. Not only the second supply, but also AVAX holders who have stakes in their hands can dispose of them. Therefore, in AVAX, which has short-term supply risk, long-term investments are called value investments, while short-term risks have the possibility of withdrawal.

When we consider AVAX / USD technically, the decreasing trend starting from the $ 58 zone continues actively. In yesterday's $ 30 move, all three oscillators came back from overbought, confirming resistance. For now, it should not be forgotten that the direction is on the descending side, although the horizontal trading strategy continues in AVAX / USD, which is moving horizontally between $ 22.00-27.75 levels. 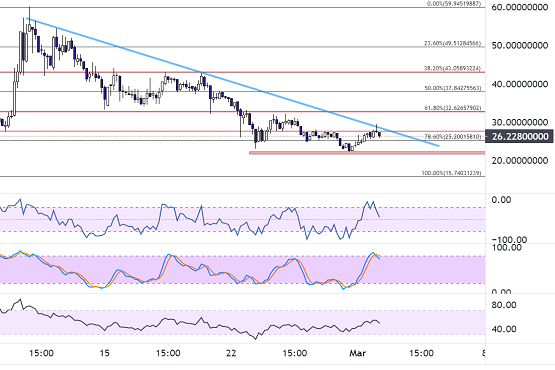 The XRP / USD pair is listed at around $ 0.43, down 3% this morning.
According to Whale Alert tracking yesterday, a large amount of XRP sales were detected from the wallet of Jed McCaleb, Ripple's former partner. Considering the daily transaction volume of XRP, which is approximately 4 billion USD in this 24-hour change, it will almost not have an impact on pricing.

When looking at the XRP / USD parity from a technical point of view, it is seen that the pricing remains flat between $ 0.40-0.45. However, the formed reversal pennant continues to signal weakness for the pair, which may extend to the $ 0.36 intermediate support zone. $ 0.36 is in the intermediate support position and possible reactions can come from here. Nevertheless, it can be expected that the technical analysis will give more positive signals for XRP, which is free from the blurring in the macro part. For this reason, XRP transactions, which are not clear to fall and are made gradually, can be evaluated in the medium-long term for investors. 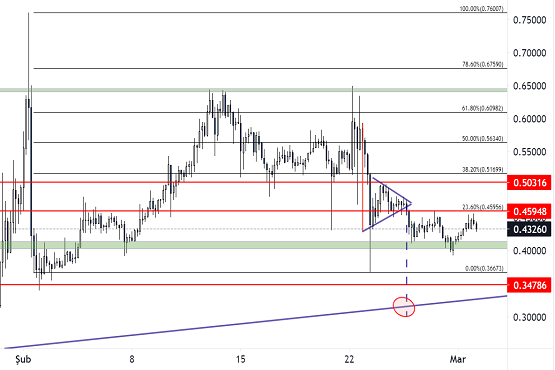 While Litecoin was trading at $ 172 with 2% sellers this morning, it stands out with sales on the Grayscale side. Although 175 thousand LTC were purchased by Grayscale during the 30-day change, 150 exits were observed this morning. In contrast, we started counting days for the MimbleWimble update as of March, and a positive development to be announced by LTC regarding the update may also be reflected in pricing. It is also 14% behind Bitcoin in monthly returns. Thus, although the outlook is positive in the medium-long term, it is trying to hold on to the upward trend for now.

When we consider LTC / USD technically, we know that the retreat towards the major uptrend has led to losses for the pair, but considering long-term investments, there is a calm but healthy rise. When the oscillators are examined, we see that all three oscillators we consider are in the oversold zone. These signals are a sign of "cheapness" for coins below their potential, and in this case LTC is better suited for medium to long term investments. $ 155 is the main support for Litecoin, and possible reactions from there could push the pair back to $ 180. This means a 16% trading potential. 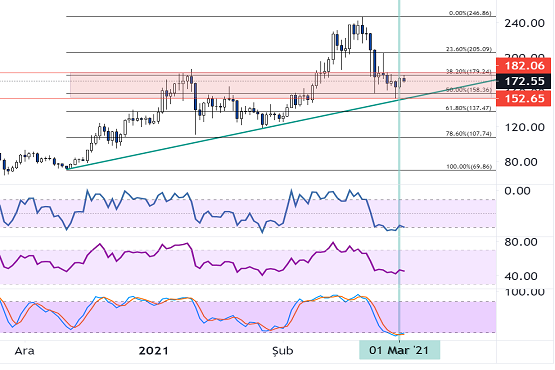 LINK has become one of the most positively differentiated crypto coins of the day this morning. Following the negative comments made by the US Treasury Secretary Yellen on cryptocurrencies, the shock started to be digested gradually. On the LINK side, the developments announced repeatedly and the chain data giving strong signals supported this increase. One of the latest developments, the collaboration with Cosmos and the Off Chain Reporting update were received very positively by LINK. In chain data, the increase in the amount of LINK transferred from exchanges to personal wallets and the decrease in trading transactions in the exchanges restricted the supply of LINK and triggered the prices upward. On the other hand, the increase in the number of smart contracts shows that the demand for new tokens joining the ecosystem is shifting towards LINK.

When the LINK / USD parity is examined technically, it is seen that the reaction from the $ 23.40 level formed a bottom level here. This level, 40% behind its record, was below its potential for LINK, and responses were expected to be strong. In the 24-hour change, the parity yielded 20%. The $ 28.90 level ahead of pricing is a strong resistance zone that has been tested before for LINK and is also a 50% slice of the Fibonacci retracement. The upside break here could accelerate towards $ 30.75. But when it is below, it will be horizontal again. 50% slices are complete or continuation places. Therefore, LINK, which is in the decision stage, is in a critical place. Prudent strategy requires seeing the next move and taking action in that direction. 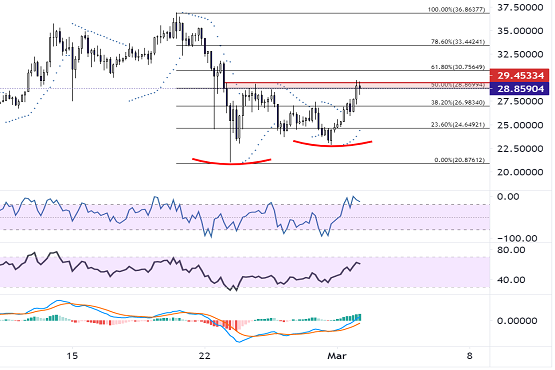 The BAT / USD pair is listed at $ 0.56 with a 4% retracement this morning. The pair tested the upper channel level of $ 0.60 and then retreated, bringing pricing to the $ 0.55 level, which is the mid-channel zone. This level is also 50% of the Fibonacci retracement and coincides with the channel midband, which could make it a strong support zone. For the reactions from here, there is a potential of 10% extending to the upper band of the channel. If there is a continuation of the pullback, $ 0.51 will be the first support zone. On the other hand, if a triangle-like pattern starts to emerge in the pair, and if the triangle formation is on the agenda, the pair will target the region of $ 0.60- $ 0.61 again, as long as the pair does not stay below $ 0.55. 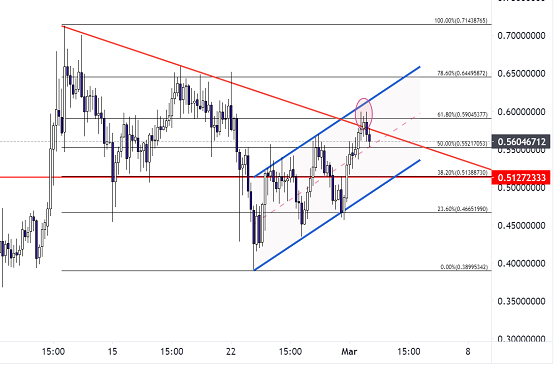