Michael Saylor, CEO of MicroStrategy, the corporate company with the largest BTC assets, told CNBC that Bitcoin will increase 100 times. Saylor also classified Bitcoin as digital gold and advised investors who want to save money to buy Bitcoin.

Istanbul Metropolitan Municipality will manage the subscription opening and closing processes in İSKİ and İGDAŞ via blockchain from now on. The municipality will also distribute ISMEK certificates on blockchain.

Square company, owned by Twitter's CEO Jack Dorsey, announced that it has purchased 3.318 Bitcoins. With this BTC investment of $ 170 million, the company's total Bitcoin asset rose to 8.27.

The Tether case, which has been going on for more than two years, has been closed with the parties reaching a compromise. In the lawsuit led by the New York Attorney General's Office, a fine of $ 18.5 million was fined, and in addition Bitfinex and Tether were banned from serving citizens residing in New York.

Bill Gates, one of the wealthiest people in the world, argued that there is no "bullish" in Bitcoin and that many people who are not as rich as Elon Musk should not take risks by investing in cryptocurrency. On the other hand, he stated that the use of digital money is a good thing, but that he finds anonymous transactions very dangerous.

Tracking cryptocurrency transfers, Whale Alert detected that 60 million XRPs had moved in the last 24 hours. Although some of them are the account addresses of individual individuals, some of the addresses that carry out this transaction also belong to large companies.

Politicians and bankers in Europe worry that the stablecoin projects that big companies like Facebook are working on will disrupt the monetary order. For this reason, the European Central Bank wants to veto projects that may adversely affect the financial order.

We cannot say about a trend reversal in Bitcoin, which has retested over $ 50,000 this morning after yesterday's hard sales in Bitcoin, because it still has a 50% monthly return. The decrease in the number of active and new addresses in on chain data has ended. In addition, the taker buy-sell ratio stopped its decline and gradually started to turn in favor of buyers. There is an increase in the amount of stablecoin transactions entering the stock exchanges. All of these show us that the market has not shrunk, and that bottom buyers, which we call as "Dip Buyers", were gathered in yesterday's sales. In addition, Square's new purchases can also encourage corporate buyers and retailers.

When we consider the BTC / USD technically, the ascent channel that has existed since December 15th worked almost as millimetrically yesterday. The channel made a return to the middle band of $ 44,900 by throwing a needle. We are still in the middle-upper band of the channel. Support for withdrawals is in the range of 45-47 thousand dollars. Therefore, testing these levels in retreats is not a decline but a correction. The view is horizontal for now in an effort to recover. 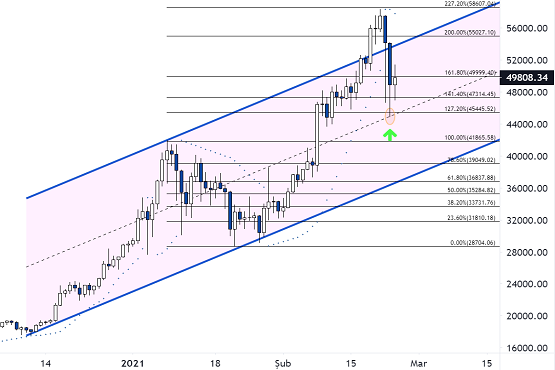 Ethereum has surged 22% from the $ 1350 low after yesterday's market heavy selling, and is trading at $ 1615 this morning with a 2.5% positive change. In Ethereum, network density and gas fees have reached such points that we almost went back to the initial version on the way to 2.0 update. As such, the use of consensus does not appeal. Therefore, although it is not currently supported for its rise or permanent, bottom-up reactions are supported.

When we take the ETH / USD technically, the $ 1350 level was the break of the rising triangle before the $ 1400 break. With the breaking of this rising triangle, we had set the target of $ 2050-2060. His return from the full ascending triangle also showed that the technique was working once again. However, since the basic data do not support a permanent trend, we also look at the reactions in the technique. For this reason, the effort to return to the old bullish channel may end with a "pullback", unless it can break the $ 1680 up, and the range of $ 1510-1550 may come up again in the withdrawals. Technically, the outlook reacted in retreats, but there is a risk of reversal in resistance zones, be careful. 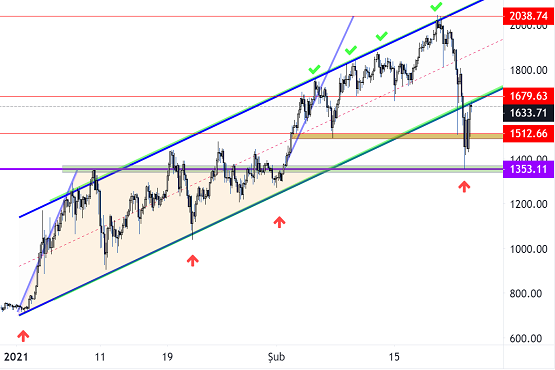 The AVAX / USD parity increased by 10% this morning, making it one of the most positive separate coins of the day. Prices at $ 30.50 compensated for yesterday's retreat and hence, the trend has moved from being bearish to flat. The region between $ 25.00 - $ 27.00 strengthened the strong support zone for AVAX and the candlestick closings in this region strengthened the buying-oriented perception for opportunity investors. Thus, the reaction that came was the preliminary steps to break the downward trend on the oscillators side. The Fibonacci 61.80 retracement is at $ 32.60 and will be a key resistance level for prices. Because the downtrend is also close to this region and the increase in demand for AVAX direction may be waiting for this trend to break. Nevertheless, as we have detailed in our previous bulletins in the basic part, the unlocking and free AVAXs can increase the sales in the market. For this reason investors need to pay attention. 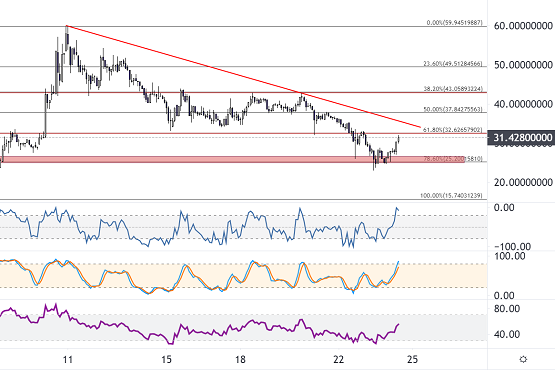 The XRP / USD pair is pricing at $ 0.48 this morning with a horizontal change. In the case between Ripple and SEC, positive effects were created on the Ripple side by altering the allegations from the SEC and alleviating the allegations. During the trial that took place yesterday, Ripple's arguments and defense strategy were more dominant and stronger, resulting in a positive atmosphere on the investor side. On the other hand, the Tether case, which was scrutinized by the cryptocurrency market, was concluded with a reasonable compensation decision and the conclusion that the accusations against Tether were unfounded. Although this two-way positive development removes many question marks, many decision studies announced by regulators and the uncertainty of the course reduce the risk appetite in all asset classes. For this reason, we encounter negative consequences of this on the XRP side. According to the data provided by Whale Alert, we see that the amount of XRP transferred to the exchanges has increased.

When the XRP / USD parity is analyzed technically, it had seen that the prices could not stabilize below $ 0.40 and recovered by 30%. But the $ 0.50 resistance has not yet been broken and this critical zone must be overcome for XRP's directional recovery to accelerate. The increase in XRP demand and the increase in transaction volumes may make the break in this region and bring the $ 0.53 region to the agenda again, but market movements should also be positive. Still, for the BAT and XR, it seems to be holding on to the trends, the two coins we like the most for the last two days, with its technical performance. 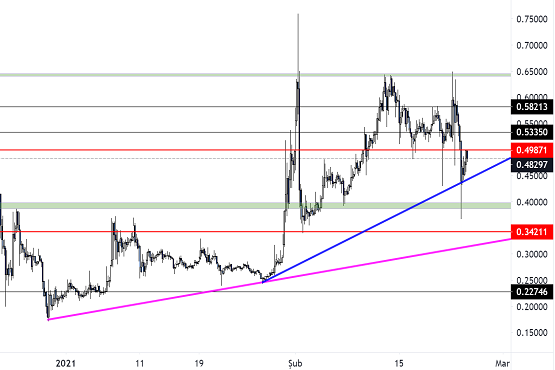 Litecoin is at $ 180, with a positive change of 1% in the morning hours. The accusations of illegal financing from Bitcoin, and the subsequent overwhelming sales trend, damaged Litecoin more than Bitcoin, with a daily price loss of 25%. But then we see a weak upward trend for Litecoin, after Bitcoin, which made up most of its losses. Nevertheless, its correlation with BTC is at 0.95, and in possible positive pricing, Litecoin directional rise may be faster because it is behind 20% in the yield spike this week according to BTC. Although our general view is positive for Litecoin, where declines are hard and the rises are calmer, long-term value investments seem more appropriate than short-term trading strategies.

When the LTC / USD pair is technically analyzed, it is seen that the 4-hour candlestick closing was made 13% higher in the $ 179 region, thanks to the upward reaction from the $ 158 level. It is important for the pair that this level is overcome from resistance and becomes a new support because there is no significant support below this level until the $ 158 level. The histograms formed below the MACD neutral zone and the downtrend in the maturity lines show that the trend is not over. Momentum has weaker peaks. 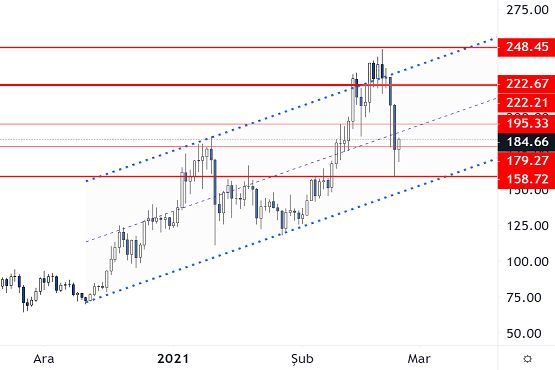 LINK has increased by 7.7% this morning, becoming one of the best performing coins after yesterday's turbulent process. Pricing at $ 27.80 increased more than 30% from yesterday's low, absorbing most of the losses. Although the transaction costs are at record levels due to network density on the Ethereum side, it poses a risk for Ethereum and ETH consensus coins, but LINK protects itself from the risk on this side thanks to the bridge it has built with both smart contracts built on it and other coins, one of which is Polkadot. On the other hand, it remained discounted compared to Ethereum on weekly and monthly periods on the basis of the income scissors. This can increase investor interest on the LINK side. Looking at the on chain data, it is seen that while the supply of many cryptocurrencies on exchanges has increased, LINK's transfers to anonymous wallets have reached an all-time high. This is a sign that predictions, especially for value investors, are bullish on the LINK side.

When the LINK / USD parity is analyzed technically, it is seen that yesterday's hard sales were also effective on the LINK side and the pricing retreated to the level of $ 21.00, failing to hold on to the $ 31.00 channel lower band. This level was last seen a month ago and one month returns were about to zero on the LINK side, but the subsequent 30% recovery pushed LINK back to positive. The $ 30.30 zone will be the first resistance level for pricing, and if the uptrend continues, the pair can be positioned within the bullish channel again. The upward breakdown of the $ 32.00 channel subband may increase demand on LINK and reflect more favorable pricing. 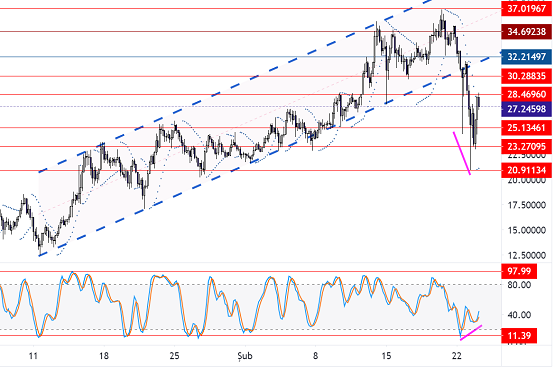 Basic Attention Token is one of the least losing coins in market corrections in the past few days. It also provided a 65% positive return on monthly returns. In the technical view, the downward break of 0.45 flag sub support was negative for the chart and created delayed upward expectations. However, as the $ 0.38 zone is the level at which the candle wicks react, it could trigger the bullish. Therefore, we will continue to be optimistic for BAT as long as the Fibo'23.60 tranche is maintained above 0.51 $. Although the selling pressures that dominated the cryptocurrency community yesterday caused a 15% decline on the chart, prices of $ 0.51 and above could make the bulls win. Thus, it can again highlight the flag formation and help it move towards its target of $ 1.00. 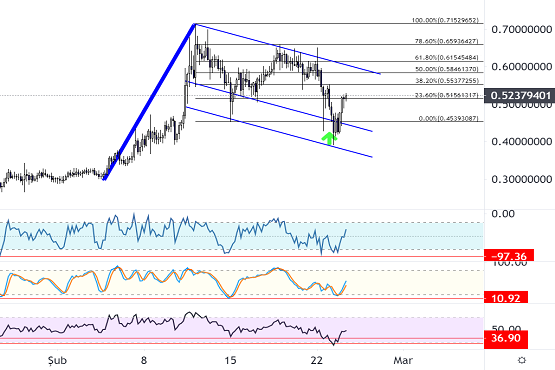