MicroStrategy CEO Michael Saylor argued that Bitcoin should never be a currency, while stating that Bitcoin is a property like stocks, buildings or gold.

The US Department of State's Awards for Justice (RFJ) program is adding cryptocurrencies to its payment options.

PayPal has increased its cryptocurrency limits for its US customers to $100,000 per week with no annual purchase limits.

The UK Financial Conduct Authority (FCA) is launching a $15 million marketing campaign to warn young investors of the dangers of high-risk investments, including cryptocurrency.

Fed Chairman Powell, in his speech last Wednesday, mentioned cryptocurrencies and stablecoins and stated that if there were digital dollars, crypto assets would not be needed.

According to research by the Cambridge Center for Alternative Finance, China's share of the BTC hash rate dropped from 75.5% in September 2019 to 46% in April 2021, and in fact, China's share of global Bitcoin production power had declined drastically before the mining pressure.

The ECB has decided to initiate the investigation/investigation phase of the Eurozone central bank digital currency (CBDC).

Bitcoin, which is horizontal in the morning hours, is priced at $ 31,895. When we analyze the chain data of Bitcoin, we see that there is an increase in the number of active and new addresses, and in addition, there is a net Bitcoin outflow from the exchanges. While these data show us that investors' interest in Bitcoin has increased, we see that the price is below 32 thousand dollars with the macroeconomic data coming in the past days.

When we consider the BTC/USDT parity technically, it is priced just above the monthly DEMA ($31,880) levels as of the morning hours. Especially since June 24, the closest support level for BTC, which has been moving in the 30-36 thousand $ band, is the 31.200-31.500 $ band. The $32,100 levels, which coincide with the weekly DEMA, are an important resistance point for Bitcoin in the possible rises, and if these levels are maintained, the price movement can accelerate towards the $ 35 thousand levels. Stochastic RSI is in oversold territory. 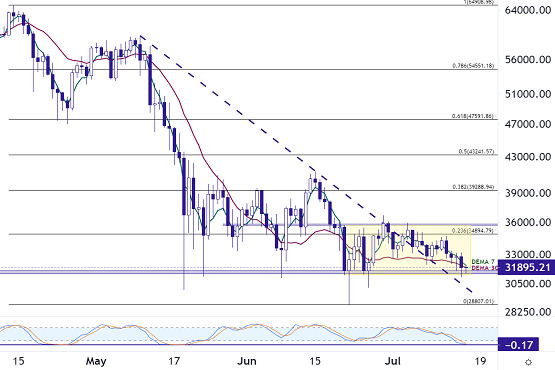 Ethereum, which gained about 1.50 percent in the morning hours, is priced at $ 1945 levels. When we look at the ETH chain data, it is seen that the positive outlook continues. The increase in the amount of ETH locked to smart contracts and the net exit from the exchanges continue. The decrease in supply side reduces the pressure on the sell side unless there is a significant decrease in demand for ETH.

When we consider the ETH/USDT parity in a technical sense, it is seen that the price movement continues between the $ 2042 resistance level and the 1871 support level as of July 12. There is the MACD, which signals buy from the oversold zone in the 4-hour period, along with a price action that turns up from the $1871 level. If this price action continues, we expect it to retest the existing minor descending trend at $2000 as of July 7. With the trend break, the first short-term targets are the $2042 resistance level and the $2123 level, which is the Fibo'23.60 tranche. If $1871 is broken on pullbacks, we expect June 22 lows ($1700-1750) to act as support. 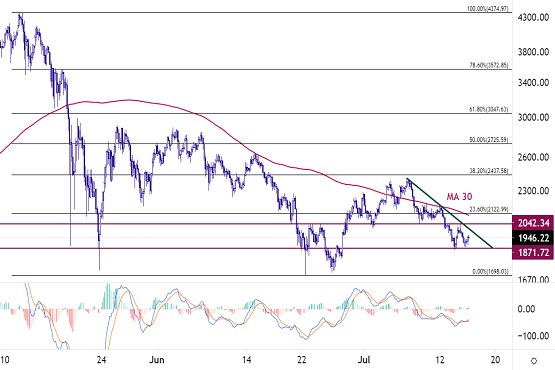 AVAX, which gained 3 percent in the morning hours, is priced at $11.74. When we consider the AVAX/USDT parity technically, we see that it is priced just above the support in the $ 11.30-11.60 band. If this support is lost, a pullback towards the $10.40 (monthly DEMA) – $10.67 levels is possible. For the continuation of the upward movement, it will be critical to break the downward trend that has been extending since May 19 and to sustain above the $11.90 levels. In the short term, it may be a more appropriate strategy to make new purchases with an upside break in this downtrend or pullbacks to support levels. 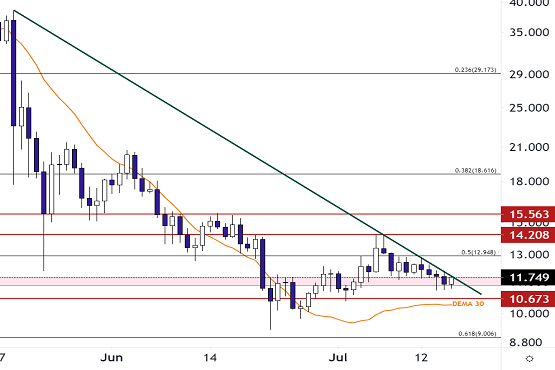 Ripple, which gained 1.89 percent in the morning hours, is priced at $ 0.609. The court had scheduled a public teleconference for July 15 to discuss the proposal not to testify of former SEC employee Hinman. This meeting took place yesterday and Ripple has won another victory over the SEC. Judge Sarah Netburn denied the SEC's request to overturn Hinman's testimony. With the decision, Ripple gained 4% during the night and rose to the level of $ 0.62, but it shows a pullback in the morning hours.

When we look at the XRP/USDT parity technically, XRP testing the top of the descending channel middle band during the night hours could not sustain at $0.62 levels. If the upward movement continues, the $0.619 levels are the closest resistance levels, and if it persists above these levels, we expect the price action to accelerate towards the $0.629 levels. If there is a continuation of the pullback experienced in the morning, we expect the $0.589-0.59 levels to act as the nearest support level. The MACD has formed a buy signal. In the short term, buying near support and selling near resistance will be a more appropriate strategy. 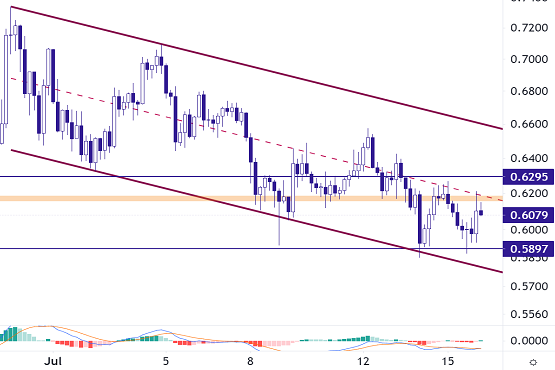 Litecoin, which rose 0.4 percent in the morning hours, is priced at $ 127. When we analyze the chain data for Litecoin, we see that there has been an increase in the number of active and new addresses as of yesterday. In addition, the MVRV Z-Score data, which shows that the price is discounted to the fair price when below 0, is -0.25 and indicates that the prices we are at are discounted for Litecoin in the long run.

When we consider the LTC/USDT parity technically, it continues to move in a descending trend in the 4-hour period, while it is priced above the $125 levels, which coincides with the middle region of Fibonacci, as of the morning hours. The nearest support level is $125, and if the upward movement continues, we expect the $128-130 band to act as the closest resistance zone, which coincides with the descending trend since June 12. In the short term, buying near support and selling near resistance will be a healthier strategy. 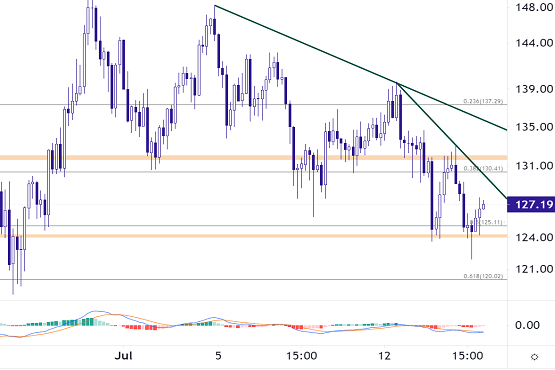 LINK, which gained about 2.80 percent in the morning hours, is priced at $ 16.18. When we look at the chain data for LINK, we cannot talk about a recovery in the number of new and active addresses. It is seen that the amount of LINK locked to smart contracts has been around 56% for a long time.

When we consider the LINK/USDT parity in a technical sense, we see that the downward price movement continues close to and above the current major descending trend as of May 10. LINK, which has been performing sideways price action between $20.5-15.5 as of June 21, is located near the lower band of this compression area. In the daily period, the stochastic crosses above the oversold zone, giving a buy signal. If the recovery in the morning continues throughout the day, the next target is the resistance zone between $17.5-18. On the pullbacks, we expect the $14.5 region to act as support. 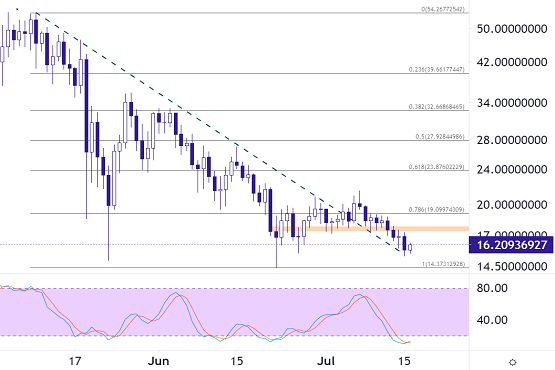 BAT, which gained about 4 percent in the morning hours, is priced at $ 0.528. When we examine the BAT/USDT parity technically, BAT, which tested the level of $0.5092, which was flat in the past 2 days, made its daily close below this level yesterday, but it continues to be priced above it by quickly finding support. Based on the current prices in the daily period, we see that the stochastic gives a buy signal from the oversold region. If this signal comes in as of the daily close, increases are expected towards the $0.565-0.579 band, which is the Fibo'23.60 tranche for BAT and also coincides with the 30-day moving average level. If there is a daily close below the $0.509 level again, pullbacks to June 22 lows can be seen. 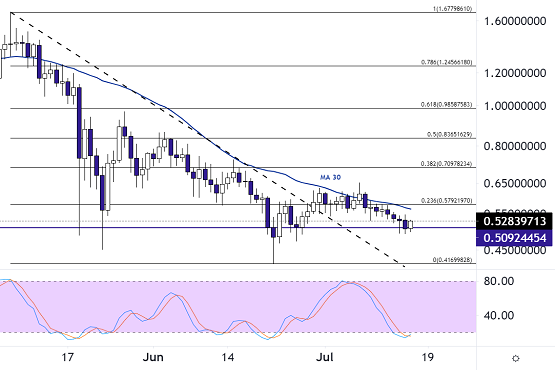