MicroStrategy announced that it bought 13,005 Bitcoins at an average of $ 37,617 with its income from bond sales, while the total number of Bitcoins of the company was 105,085.

Elvira Nabiullina, Governor of the Central Bank of Russia, reiterated the bank's negative stance on crypto and advised them to be cautious when investing in cryptocurrencies.

Ban News from the Central Bank of China

The People's Bank of China has urged institutions to immediately cut off payment channels used for trading cryptocurrencies. The PBOC said they should also stop their other crypto-related financial services.

Digital asset securities firm Securitize has raised $48 million in a joint-led fundraising round of Morgan Stanley and Blockchain Capital.

Mining Machinery Transported from China to the USA
It has been stated that three tons of mining machines will be moved from Guangzhou, China to Maryland, USA, after increasing pressure on Bitcoin mining in China.

UK-based TSB Banking Group Plc. It will ban its over 5.4 million customers from purchasing Bitcoin (BTC) and other cryptocurrencies.

Portugal's Central Bank has licensed two domestic cryptocurrency exchanges in its country after the regulation covering the purpose of preventing money laundering and terrorist financing.

Bitcoin is priced at $32,616 with an increase of 3 percent in the morning hours. When we examine the chain data, we see that there is a 37% increase in the number of new addresses and a 25% increase in the number of active addresses in the morning compared to the last 24 hours. Although this indicates increased interest from investors, according to daily chain data, there is $ 33 million worth of entries in Bitcoin exchanges. According to the weekly CoinShares report, we see that the outflows from Bitcoin continue, and according to the data received on June 18, there is an outflow from the funds of 89 million dollars, and the interest of institutional investors in Bitcoin has decreased.

When we consider the BTC / USDT parity technically, it is priced at the level of 32-33 thousand dollars, which is the support zone of the price. The upward break of the 33 thousand dollar band is very important and we can expect the price to move to 35 thousand dollars with the reaction purchases from these levels. However, if there is a 4-hour close below these support levels, we expect price movement towards the $ 30,000 levels, which is the starting point of Fibonacci. We see that the RSI has returned from the support level at 33, supporting the upward movement of the price. 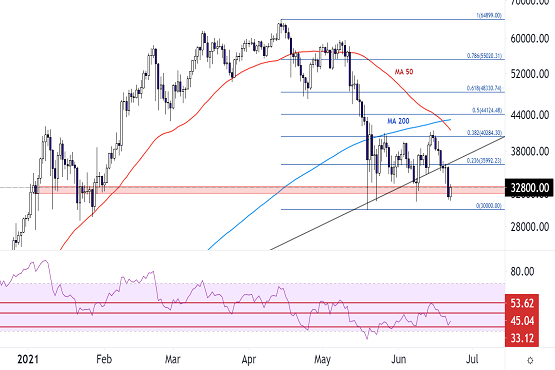 Ethereum is priced at $ 1936 with an increase of 2 percent in the morning hours. When we analyze the Ethereum daily chain data, although it is negative that there is an ETH inflow of 97 million dollars to the stock markets, we interpret the relatively low value of this value during yesterday's decline positively. On the other hand, the 21% increase in the number of Ethereum new addresses and the 14% increase in the number of active addresses in the last 24 hours can be considered positive. According to the CoinShares weekly report, the outflow of institutions from Ethereum is at the level of 1 million dollars, and we do not interpret this exit negatively in a volatile market. 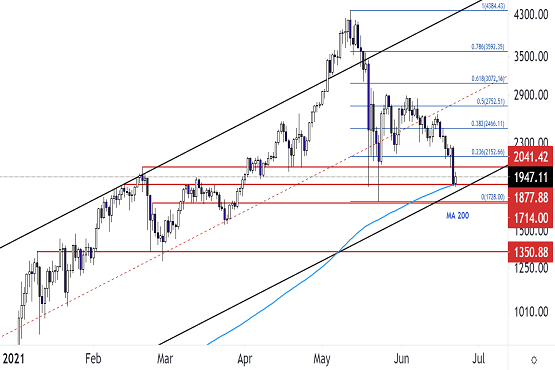 AVAX is priced at $11.12, down 0.60 percent in the morning, just below the corresponding resistance in the $11.28-12.10 band. When we consider the AVAX/USDT parity technically, we see that the downward trend continues. In the recovery in the market, we see that AVAX diverged negatively. The $9.00 levels coming to the Fibo'61.80 retracement level are the support levels and if there is a reaction from these levels, purchases can be made. On the other hand, breaking the resistance in the $11.28-12.10 band and 4-hour closes above it can be expected for new purchases. 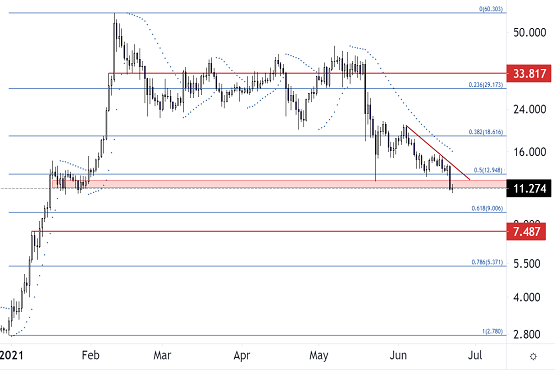 Ripple, which has risen by 2 percent in the morning hours, is priced at $ 0.61. While waiting for July 2, the first important date in the ongoing litigation process with the SEC, we observe that XRP moves with the market in general.

When we consider the XRP/USDT parity technically, we see that it has continued its downward trend since May 18. XRP, which managed to hold above the $0.57 levels, which coincides with the 50% retracement of Fibonacci, tested the $0.64 level, which coincides with the 7-day DEMA, but could not stay above it. If it persists at the Fibo'50.00 correction level in the 4-hour period, we expect the price to move towards the 7-day DEMA and the two-week DEMA, i.e. the $0.64-0.69 band, and these levels will be resistance levels. About 15 percent of price movements can be benefited from by buying near support and selling near resistance. 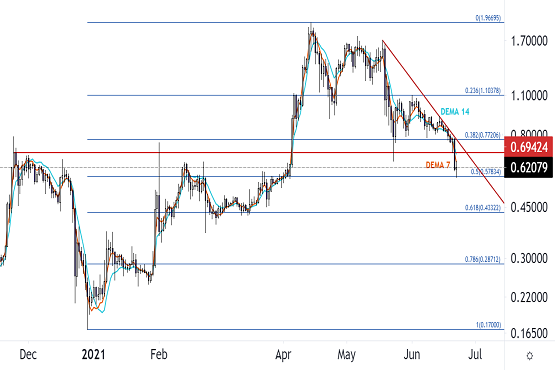 Litecoin, which rises by about 3 percent in the morning hours, is priced at $128.80. When we analyze the Litecoin chain data, the MVRV-Z Score, which we use to analyze whether the price is over or undervalued compared to its fair value, and confirming that the price is discounted if it is below zero, dropped to -0.31 for Litecoin. With the decline in the market, we interpret Litecoin as discounted for long-term investors as of June 22.

Technically speaking, the LTC/USDT pair is priced at $128.80 just above the Bollinger lower band in the 4-hour period. The first level of resistance is located at $139.47, with $124.24 as support. By following these support and resistance levels, a short-term buy-sell strategy can be followed by buying near support and selling near resistance. If the resistance at $139 is broken to the upside, price action could begin towards the Bollinger middle band, which coincides with the $150 levels. 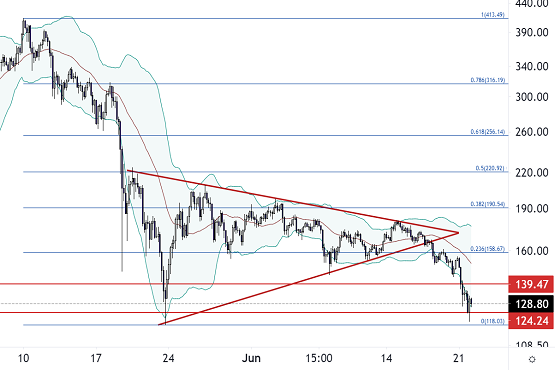 LINK is priced at $18.00 with an increase of 3 percent in the morning hours. When we examine the chain data for LINK, we see that the number of active and new addresses has increased and the interest of the investor has increased. We interpret this situation positively.

When we look at the LINK/USDT parity technically, we see that LINK, which is at $ 17.86, is holding above the support at $ 17.31. With a 4-hour close above these levels, we expect it to move towards the resistance at $20.22-20.30, which also coincides with the Fibo'23.60 retracement level. If the support at $117.31 is broken to the downside, there could be a pullback towards the $14.98 levels. A short-term trading strategy can be applied by buying and selling near support and resistance levels. 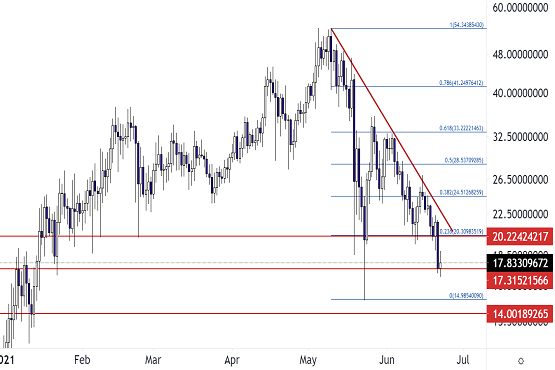 BAT is priced at 0.518 dollars, depreciating by 1.5 percent this morning. Grayscale has bought 80601 BATs in the last 24 hours and we see that the institutional side considers the market-wide decline as a buying opportunity for BAT.

When we consider the BAT/USDT parity technically, the trading volume for BAT, which lost about 15 percent yesterday, was above the last 20-day average. Although it broke the 0.539 support level to the downside with a 15% decline yesterday, it held above the major support at the $0.502 level. On a daily basis, the stochastic is about to cross in the oversold zone. If this support level is held and the stochastic crosses in the buy direction, a rise towards the $0.54 level and accompanying increases to the $0.61 levels corresponding to the descending trend can be seen. If the 0.502 support level is lost, the bearish price action can maintain its continuity. 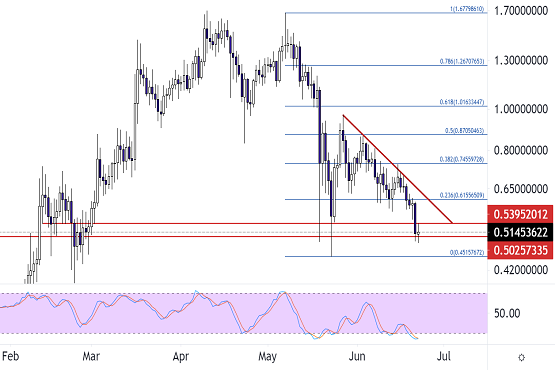