Business intelligence and analytics software company MicroStrategy has announced that the company bought  over $240 million worth of 5,005 bitcoin at an average price of $48,099.

European hedge fund Brevan Howard Asset Management has plans to expand into the developing cryptocurrency field. Bloomberg reported that the company aims to open a new unit, BH Digital to invest in cryptocurrency and another digital assets.

Avalanche Chain’s Zabu Finance Has Been Exploited for Roughly $3,2 Million Worth of Crypto Tokens

Zabu Finance, a DeFi protocol on Avalanche (AVAX) has recently been exploited for roughly $3,2 million worth of crypto tokens.

ARK Next Generation Internet ETF by Digital Investment Manager Ark Invest expect to have an approval for the last months, and the company has decided to make a change. According to the SEC application the company made, ARK fund plans to invest in Canadian Bitcoin ETFs.

A new partnership between the SkyBridge Capital and NAX is set to offer decentralized applications and institutional investment opportunities as part of an initiative using layer-1 protocol Algorand.

The Lightning Network Is Growing Rapidly
Lightning Network, the second-layer technology solutions built on top of the Bitcoin, increased its channel capacity, and every week persists in reaching the highest levels of all time. The network now houses over 2.400 BTC in more than 73000 channels.

Bitcoin, which gained about 0.35 percent in the morning, is priced at $45,185. Business intelligence and analytics software firm MicroStrategy announced that the company has invested over $240 million to buy 5,050 Bitcoins at an average price of $48,099. With the recent Bitcoin purchase, the company owns about 0.519 percent of the total supply.

When we consider BTC/USDT parity in technical terms, Bitcoin, which tested positive yesterday by erasing its intraday losses with the litecoin-walmart partnership news, experienced sharp declines with the discovery that this news was unfounded. With this decrease, BTC broke both its 200-day moving average and its 50-day moving average downwards and closed below these levels. Yesterday's sharp fall was supported by Fibo's $43,913, which was in the 38.20 tranche, and closed at $44,900. It is important to break up the 50- and 200-day moving averages for the continuation of the rises in Bitcoin, which we expect to have a golden cross in the coming days. As long as it stays below, there may be a retreat towards $42,000. 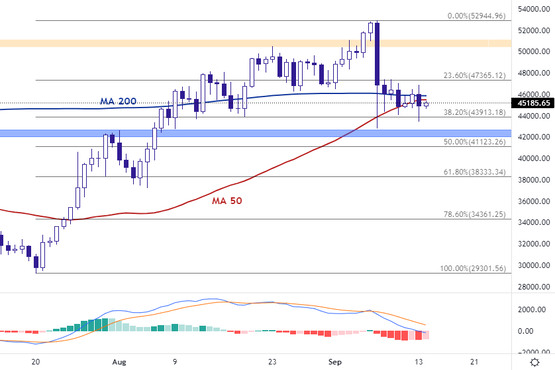 Ethereum, which gained about 0.30 percent in the morning, is priced at $3296.57. According to the weekly coinshares report, there has been approximately $6.3 million in outflows in the Ethereum digital diversity fund in the last week. At the same time, Ethereum accounts for about 26.5 percent of digital asset funds, with a total of $14.91 billion.

When we consider the ETH/USDT parity in technical terms, ETH retreated towards the level of $3140 with intraday losses and as we mentioned in the bulletin earlier, with the 50-day moving average, and its daily close was $3285 with the support it found from this level. There was no break in the morning if fibo's $78.60 was raised towards $3351 with the daily candle opening. The sell signal is maintained on macd during the daily period. For ETH to continue to rise, the resistance level in the $3282 -$3375 band needs to break up again and maintain above. If this area is below, retreats towards the 50-day moving average may continue. 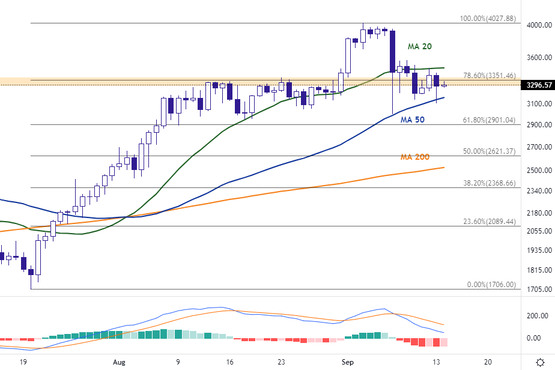 The AVAX, which lost about 6.70 percent in the morning, is priced at $56.94. When we examine the AVAX/USDT parity technically, AVAX broke its downward trend as of August 24, breaking upwards on Friday, and the resistance zone in the $50-51 band also broke upwards and rose to its new peak level of $64.90. AVAX, which has gained more than $50-51 with its support from Fibo's $49.67, which corresponds to Fibo'61.80, started the day with a rise. The AVAX, which broke the $55.87 level in the morning at Fibo'78.60, will continue to rise towards its peak level if it can maintain above that level. 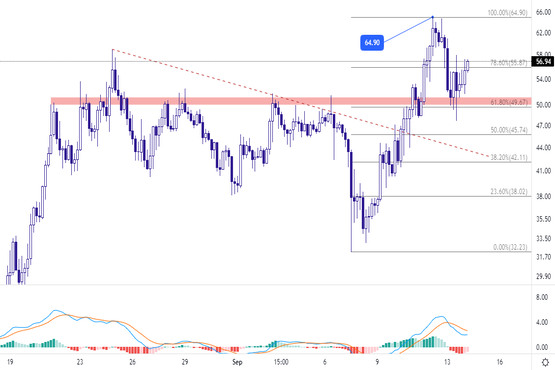 Ripple, which gained about 1.1 percent in the morning, is priced at $1.0738. When we consider the XRP/USDT pair technically, as we mentioned in the bulletin yesterday, XRP retreated to its 50-day moving average yesterday and closed the day just below the $1.0715 level, which corresponds to Fibo'61.80. Although it signals a stock market buy in the daily period, daily closings above $1,075 must come for the rises in XRP priced within the resistance zone to continue. As long as we maintain below this level, there may be withdrawals towards the $1 level for XRP. 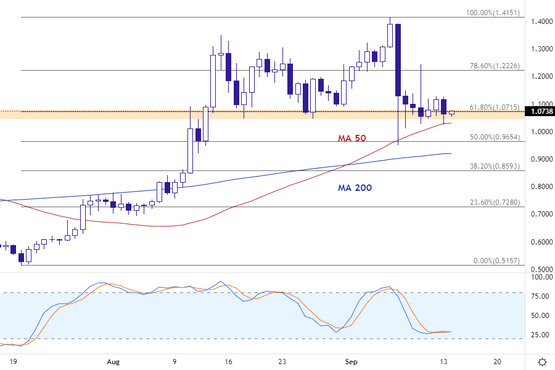 LTC, which lost about 1.10 percent in the morning, is priced at $178.4. Yesterday, the market-wide negative price was negative, with news of the Litecoin-Walmart partnership deal spreading on social media, wiping out almost all market losses, which were further hit by Walmart's denial of the news. LTC, which generated a return of about 31 percent during the day, wiped out all earnings and closed the day with a 2 percent loss.

When we consider the LTC/USDT parity in technical terms, LTC, which was reacting close to the level of $243, which corresponded to the Fibo'38.20 tranche with yesterday's sharp rise, retreated to the level of $170.4, which corresponds to its 50-day moving average, with the denial of the news. Priced between the 50 and 200-day moving average, the breakdown of one of these two averages will be decisive in LTC. 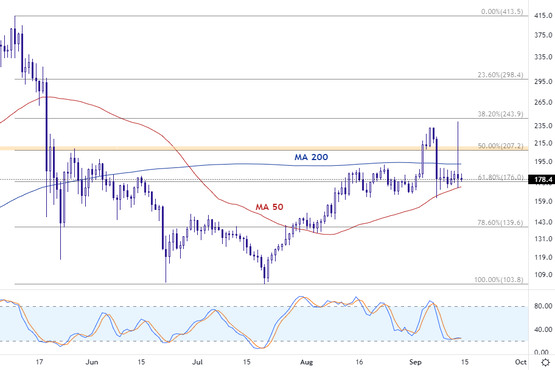 LINK, which gained about 0.52 percent in the morning, is priced at $27.25. When we examined the LINK/USDT parity technically, LINK, which experienced a retreat towards $24.81, which corresponds to Fibo'61.80 with the sharp declines experienced throughout the market yesterday, closed its daily close above both its 50-day average and its significant support level of $26.67. When we examine it in the daily period, we see that the stoics signal the buy. For LINK, rises will continue as long as persistence above $26.67. 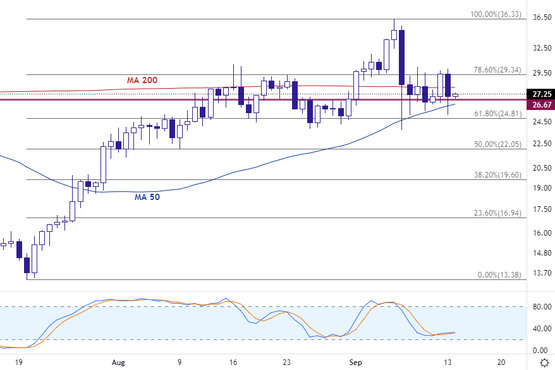 BAT, which gained about 1.2 percent in the morning, is priced at $0.759. When we consider BAT/USDT parity technically, this jamming area was broken down from $0.756 yesterday for BAT, which saw a price movement squeezed with the sharp declines on September 7. The $0.76 level, which coincided with its 50-day moving average, was also broken down. In BAT, which rises in the morning towards the lower band of this jamming area, this rise remains a rejection and if it is resisted from these levels, there may be retreats towards $0.70. 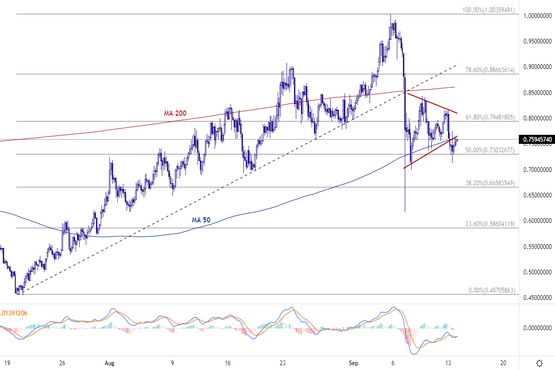