US-based software company MicroStrategy announced that it received 314 BTC worth $ 10 million. With the increase in Bitcoin prices in the purchase he made on Friday, he has already made a profit of 500 thousand dollars. With this move, MicroStrategy increased the number of BTC in its possession to 70,784.

US Support Package on the Way

Paid the University Fee with the Bitcoins

Investor Nikki Beesetti reported that he paid his tuition fee by selling the Bitcoins he bought in 2017 for $ 19,000. Now the investor, who allocates 20% of his assets to crypto money investors, emphasized his endless trust in Bitcoin.

In the report published by the credit rating agency Standard & Poors, it was said that BTC has many similarities with gold. They are most similar with their features that can protect them from inflation. On the other hand, as the demand for Bitcoin increases, the fear of "stealing Bitcoin" disappears.

VanEck Reapplies to SEC for ETF

US New York state-based fund management firm VanEck has again applied to the US Stock Exchange Commission (SEC) for listing. It is curious what decision will be made by the SEC, which does not lean towards Bitcoin-based exchange traded funds (ETFs).

Bitcoin rose 8 percent in the past two days, gathering from the $ 30,900 zone to hit $ 33,700. In addition to the technical outlook in BTC / USD, which was 3 percent positive this morning, the news on the fundamental side also supported BTC. MicroStrategy company announced that it received 70.8 thousand BTC from the level of $ 31,800. In addition, $ 1 billion has been added to the Bitcoin fund GBTCn in Grayscale in the last seven days. When evaluated from this aspect and added to BlackRock, existing and new entrants' interest in Bitcoin continues. When we consider BTC / USD technically; A double high has formed in the $ 28,900-33,600 range and current prices are just behind this neckline. Because if the $ 33,600-33,700 level is broken in the upward direction, a double bottom movement starts and it can accelerate towards the $ 37,500 levels. Although we are still in a downward trend in the short term, upward movements can be seen with such short term recoveries. The outlook is horizontal until the $ 33,700 level breaks but is generally positive. 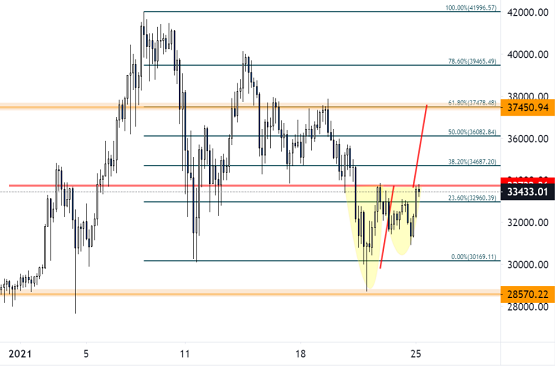 Ethereum started the new week with a record, as it tested the $ 1480 level this morning. He said that the rise in Ethereum is almost coming. In the video we shot last week, we pointed out the ETH levels of $ 1500. While the amount of ETH withdrawn from the exchanges was $ 1.5 billion last week, the amount of ETH held in the exchanges fell to the lowest level in the last 15 months. While this situation leads to a liquidity crisis in ETH, we see that the general price balance has increased in the face of increasing demand. On a monthly basis, the ETH-BTC scissors have been opened a little. This situation experienced in yields may trigger the desire for profit realization after ETH's new record. Therefore, if the technical levels we will specify are tested, we can witness ETH idling for a short time and BTC moving. With the BTC dominance declining from 64% to 62.7%, this symbolizes that the uptrend in ETH and DeFi can be more comfortable.

When we consider ETH / USD technically, the bullish movement has turned into a channel. The new records in the reactions are the channel upper band, and the $ 1100 level is the channel lower support in the withdrawals. After the record on January 21, a hard sell came and profit realization was seen. Again, this record is formed and there is some withdrawal. While the $ 1350 level is supporting, retractions may accelerate after moving below this point. Therefore, even if a record is experienced, withdrawals are followed and supports are expected for new purchases. 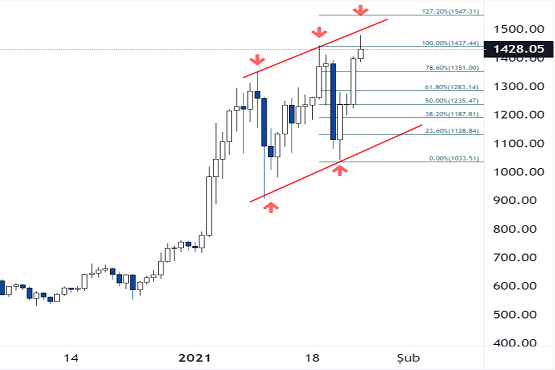 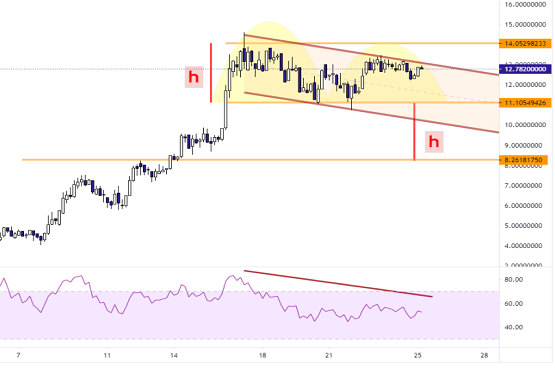 The XRP / USD pair is pricing at $ 0.27 this morning in a slow motion. On the positive side on a daily basis with an increase of 2%. In the previous days, the well-known American artist named Soulja Boy asked how he could have XRP on his Twitter account with 5 million followers. The famous artist, who could not trade with major stock markets delisting XRP on the US side, actually represents the US investor profile in general. Still, the second Spark Token Airdrop to XRP holders for Ripple, where interest on the Asian side continues, is expected to arrive in the first half of the year. On social media, many lawyers continue to comment on the SEC case. Recently, a popular lawyer with expertise in cryptocurrencies made it clear that XRP is a security.

When the XRP / USD parity is analyzed technically, although there is an uptrend, the uptrend is very slow. Although the trend with sellers continues, on the other hand, the purchases made create competitive pricing and bring small increases and decreases. For the price supporting the $ 0.27 level above the Fibo'23.60 correction, if the price is above this zone, the $ 0.30 pricing that has been tested multiple times in the last 10 days may be revived. Positive reflections of the market and the news flow should be followed carefully. 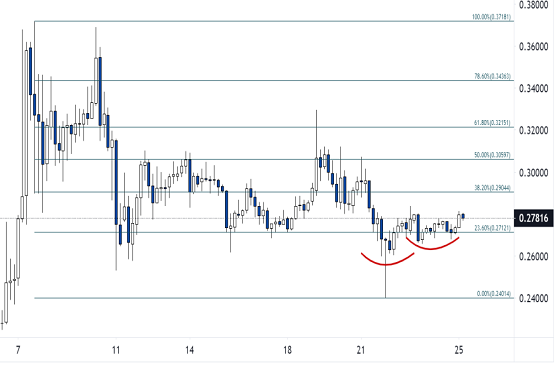 Litecoin is showing some sideways movement against the dollar this morning, with 2 percent plus pricing at $ 144. In weekly and monthly returns, LTC remained far away from the BTC return it was on, and the LTC-ETH shear, which we started to consider because it announced that it would join the Flare Network and would bridge Ethereum, also moved far from each other. From this aspect, BTC's monthly return is 26% and ETH's monthly return is 120%. In Litecoin, this return was only 11%. We had lived this scenario in LINK before and then had a quick exit. When the scenario analysis is done, there is no technical or fundamental damage to prevent us from seeing the situation similar to the situation experienced in LINK for LTC.

When we consider the LTC / USD technically, a wide horizontal band has formed between the $ 120 and $ 185 levels. With the bottoms and descending hills gathered in this belt, the process is gradually proceeding towards the compression area. It can be expected that the movements after the impingement will give even harsher reactions. For now, trades are mostly in the daily narrower horizontal band of $ 135-148. If we round up the entire paragraph in the current view, the recovered bottoms could make $ 135 a solid support in the coming days. 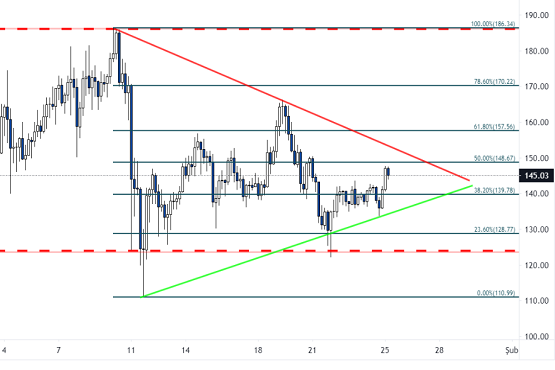 Chainlink refreshed its record in the first hours of the day, hitting $ 25.80 and it is priced around $ 24.90 during the hours we are in. Chainlink, whose market value exceeded $ 10 billion, increased its market value size by jumping 11 digits in the asset ranking. Looking at the weekly and monthly performances, we see that on the ETH-LINK side, the yield cuts are close to closing and the rising performances converge on a percentage scale. The amount locked on DeFi platforms shows a rapid increase, making Chainlink's star shine.

When the LINK / USD parity is analyzed technically, it is seen that LINK, which is in the upward channel, remains on the upper band of the channel and continues its positive course. At the $ 23.50 Fibonacci support level and above, the $ 25.40 resistance stands out, slightly below the record level, while the upper channel is past $ 26.50. As the indicators are in the overbought position, there may be retracement signals after the record. Fibo retracement levels will be followed for possible retracements. The outlook is positive. 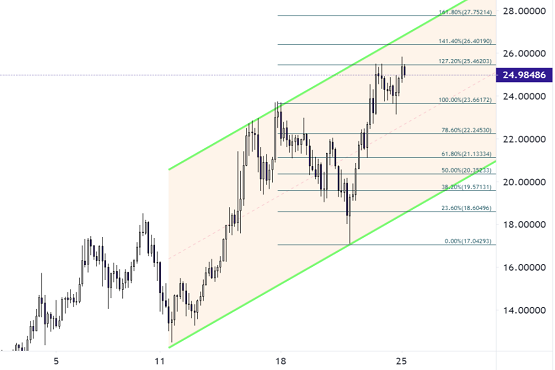 While the Simple Attention Token appears to be somewhat weak with a sideways change of 0.7% against the dollar this morning, it was up 40% last week with news-based developments. Moreover, this increase was supported by the volume and paralleled the increase in the number of buyers and according to the technical analysis rules, the volume supported this increase. For BAT, one of the six altcoins Grayscale wants to fund, the macro segment and the news feed are riveting the rise. After this period, BAT emerges as an altcoin that will appeal to corporate perception and interest.

In the technical part of BAT / USD, the double bottom formation target of $ 0.17 to $ 0.27 is passing through the levels of $ 0.37 and is very close to its target. The fact that there is a small withdrawal can also initiate profit sales. Therefore, not insisting on completing the goal or gradual exits can be beneficial. The $ 0.30 support in the Fibo'50 retracement zone will be followed during the day. On the upside, the outlook is positive. 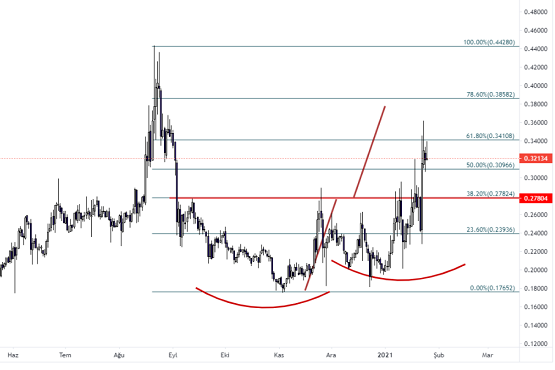