MicroStrategy has announced that it will buy Bitcoin with the $488 million it earned while completing its $500 million bond issuance.

Paul Tudor Jones, a hedge fund manager with a $7 billion portfolio, stated that he likes Bitcoin in order to diversify the portfolio, and that he wants to allocate 5% of his portfolio to Bitcoin.

Cryptocurrency Exchanges to Be Considered High-Risk Clients in South Korea

Italy's stock market regulator said in a statement that the uncontrolled spread of cryptocurrencies is worrisome and will take its own measures if it takes a long time to find a solution across Europe.

The Thai Securities and Exchange Commission (SEC) prohibits the trading of memecoins, fan tokens, and NFTs as they have no clear substance and fundamentally no value.

MicroStrategy signaled that it could sell $1 billion worth of stock in a document it submitted to the SEC after completing its bond issue yesterday.

Goldman Sachs is preparing to offer Ethereum futures due to the increasing interest in cryptocurrencies by its customers.

It has reached a new milestone where more than 25% of the entire ETH supply is locked behind smart contracts, increasing it to 25% from 15% last year.

Tanzanian President Urges Central Banks to Work on Crypto Adoption
Tanzanian President Samia Suluhu Hassan stated that he does not want his country to lag behind in the ever-increasing cryptocurrency adoption and development process.

Bitcoin starts the day over 40 thousand dollars this morning with its 20% gain in the last two days. After MicroStrategy's sale of $ 500 million worth of debt securities, this publicly traded company will be able to sell shares worth $ 1 billion and will again be able to buy BTC with all of its revenues. In addition, yesterday, Paul Tudor's statement that he will increase BTC, which is 2 percent of its total assets, to 5 percent, which he announced in May, also raised the question of whether institutions and fund managers have started again. Even though JP Morgan states that the institutions will not take action before it goes below 30 thousand, the rise can be made possible by breaking the FOMO and technical points that can start from this region. That's why technique is so important.

When we consider BTC/USDT technically, we haven't left the wide band range of 30 thousand- 41 thousand $ horizontal region yet. The fear created by the 50 and 200-day averages, called the death cross, turned into psychology. Therefore, it is necessary to break this average, which has passed the 41 thousand level. Although this region is the first challenging place, the previous lows of $44,800, which coincides with the Fibo'50 resistance, must also be broken to see comfortable rises. We are technically in a tough resistance zone. But the outlook is eager. 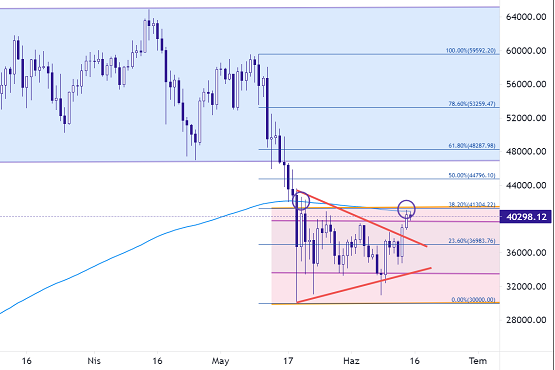 Ethereum is preparing to end the directionless movements of the Asian session in the market, which started the new week mixed. While some testnet applications were discussed before the London fork on July 31, crowd sensitivity for ETH was negative for ETH in social media analyzes on the other hand. While these analyzes are generally preferred by investors who are looking for bottoms, we see that the amount of ETH in the exchanges has decreased, but new purchases have not been made to the wallets.

When we consider the ETH/USDT parity technically, the descending trend formed from $ 4370 was once again violated to the upside. Thanks to this hold above the $2465 level, which coincides with the Fibo'38.2 slice, the violation may turn into a permanent breakout. The $2630 level will be our resistance for the day. The strength of the movement will depend on the money inflows, which are not very strong for now. 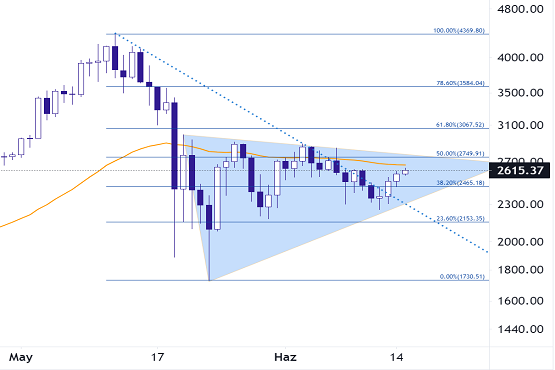 AVAX, which gained value by 1.25 percent in the morning hours, is priced at $ 15.25. When we consider the AVAX/USDT parity technically, AVAX, which is priced below the resistance at $ 15.40, is not included in the general recovery in the market for now. When we examine it in the 4-hour period, we expect AVAX, which is in the stochastic oversold region, but still has a movement area in the RSI, to accelerate its upward movement and close the short-term gap with the market, unless it falls below the support at the 53 level on the RSI. Our next target for AVAX is at $17.30, where we anticipate volume to come with the break of the resistance at $15.40. 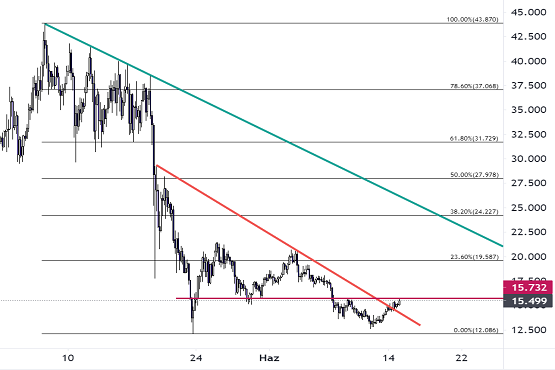 Ripple is priced at $0.893 with horizontal price movement in the morning. 60 days were requested for the collection of documents related to BTC, ETH and XRP, which are expected to be submitted to the court by the SEC. Judge Netburn first ordered the investigation to be completed by August 31st and the entire process to be completed by October 15th. There was also a deadline request by Ripple before, while this request was made, the long period of time was not interpreted very positively by Ripple. On the other hand, Ripple forwarded a letter to Judge Netburn explaining the necessity of sharing the SEC's e-mails with people who may be related to the case, other written documents, and internal discussions regarding the case during the discovery process of the documents. The answer by Judge Netburn is not yet clear. With the prolongation of the discovery period and this time granted to the SEC, there is a consensus that the case can be concluded by the beginning of 2022 at the earliest. We maintain our long-term view as positive, as there has been no negative development for Ripple.

When we examine the XRP/USDT parity technically, it is priced close to the lower band of the ascending channel that started on May 23 in the daily period. We see that the stochastic gives a buy signal in the daily period, as XRP closed yesterday above the $0.88 support level. Priced below the $0.899 level, which is the Fibo’23.60 tranche, XRP is also just above the RSI resistance level of 43.5. As long as the RSI does not drop below this level, we expect XRP to rally towards the resistance level at $0.98. 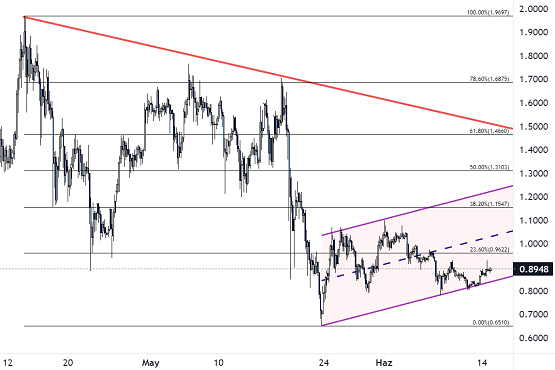 LTC moves sideways this morning and is priced at $179.50. When we look at the chain data for LTC, we see that there is a recovery in the 7-day average of the number of active addresses. However, we see that Grayscale has purchased 141 LTC funds in the last 24 hours by the institutional investor. Continuing to buy LTC for a long time, even though the amount is low, Grayscale shows that institutional investors buy LTC regardless of price. We read the outlook for LTC as positive.

When we consider LTC/USDT technically, LTC, which continues its price action within the rising channel that has existed since June 8 in the 4-hour period, broke the channel middle band above $176 last night, but the breakout and the subsequent trading volume remained low. We expect LTC to re-test this trend at $175, after breaking above the current downtrend from the May 10 high of $413. The MACD, which gave a buy signal on June 13, maintains this signal. If there is an increase in upside trading volumes, we expect price action towards $193, which coincides with the channel upper band and the next resistance level. 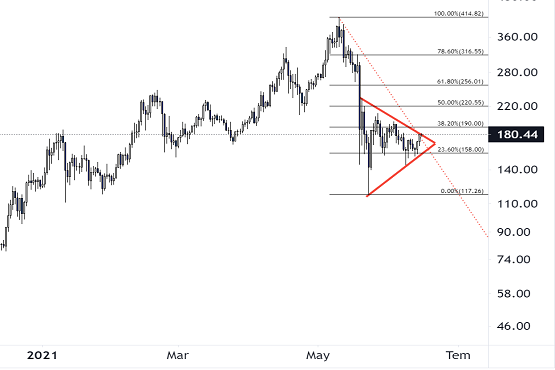 LINK Gaining around 4 percent in the morning hours, LINK is priced at $26.00. When we check the chain data for Chainlink, we see that Grayscale has purchased 22474 LINK in the last 1 month, although there is still no recovery in the 7-day average of the number of active and new addresses. We interpret the long-term outlook as positive for LINK, where we see that its institutional interest continues at low prices.

When we consider the LINK/USDT parity technically, LINK, which has reached its two targets of $ 24.25 and $ 26.20, which we stated in the bulletin yesterday, is priced just below the descending trend that has existed since May 10. Although it has seen a reaction from the key resistance at $26.20, which coincides with the downtrend, this reaction seems limited. If the downtrend is broken for LINK, where we foresee a pullback to $24.25, which is the Fibo'38.20 slice, price movements will be seen towards the Fibo'50 slice, $28.16. 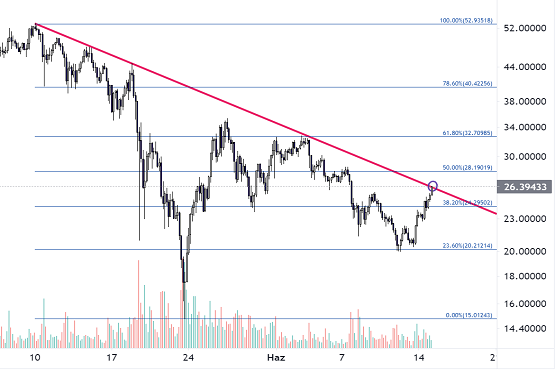 BAT is priced at $0.70, gaining about 6.5 percent this morning. When we look at the BAT/USDT parity technically, it broke the descending trend that has existed since May 7 at $ 0.66 yesterday and continued to rise by retesting it. The increase in transaction volumes along with the breakdown confirms the rise. As we mentioned in the bulletin yesterday, BAT, which went above the resistance at 47.90 on the 4-hour RSI, did not fall below this level and continued to rise. We are holding our target level at $0.73, which is the Fibo'38.20 tranche. If this level is tested and broken, our next target is at $0.775. On the intraday pullbacks, we expect $0.67 to act as support. 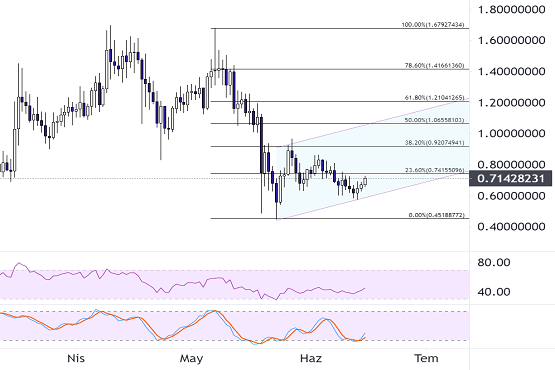