Millions of Dollars Worth Bitcoin at Risk, Warns Opimas

Financial services company Opimas has stated that $ 200 million worth of Bitcoin is at risk since the institutional investors holding large amounts of Bitcoin or other cryptocurrencies use wallets designed for individual investors.

Ripple and SEC Will Hold Phone Conference on May 21

Judge Sarah Netburn has scheduled a phone conference for May 21 between Ripple and the US Securities and Exchange Commission. At the conference,  the documentation of Ripple's legal advice on XRP and the dispute regarding this matter will be held.

Indonesia plans to tax the trading of digital assets due to the increased interest in crypto assets in recent months and the increase in crypto asset users in the country. According to a statement made by a spokesperson from the tax office, it was stated that the proposed plan is still under review and no changes have been implemented.

Digital Shekel Statement by the Central Bank of Israel

The Hungarian government plans to reduce the 30.5% tax on earnings from Bitcoin and cryptocurrencies to 15% as part of its economic recovery program.

According to the Mastercard Payment Index report, the use of cryptocurrencies has become widespread in Nigeria, Kenya and South Africa during the pandemic process, and most of the respondents stated that they plan to use cryptocurrencies next year.

The e-commerce company will present an NFT inventory that will allow sellers that meet eBay standards to sell their digital collections such as trading cards, pictures and videos as NFT. eBay has also stated that users should be ready for methods that will enable them to buy and sell NFTs in a wider range in the future.

The South Korean National Assembly Research Service (NARS) has formulated a number of recommendations to regulate the crypto industry, including the creation of a new body that will take responsibility for formulating crypto policy.

Although Bitcoin is on a flat course with an increase of 1% this morning, it is retracing the losses of the last pullback move with a 7% rise in the two-day term. After the daily withdrawal of BTC, which reached 10% on May 10, approximately 823 million Tether were transferred to the exchanges. Withdrawals perceived by bottom investors as opportunities balance funding rates and futures, setting the stage for the continuation of the upward cycle. On the other hand, the accelerated increase of ETH dominance compared to BTC creates low volatility and calm course in Bitcoin prices, while heavy exits from the frequented exchanges of institutional buyers stand out. While Ethereum's monthly return reaches 90%, the fact that Bitcoin is still in the negative zone shows that it continues its discounted process. The SOPR indicator, which shows the profit rates, shows that the periodic BTC rise is not yet completed, based on past tests, while recovering from the bottom levels.

Technically speaking, the BTC/USD parity is positioning the $56,500 level, which is the lower support of the rising wedge formation, as the first resistance while trying to hold on to the $57,500 level in the Fibo'61.80 zone. While the downward breakdown of the $56,500 support may initiate a new retracement cycle on a pattern basis, the support zone purchases may again bring the $60,000 psychological resistance to the agenda for pricing, eliminating the decline confirmation on a pattern basis. The momentum is weak but remains above the uptrend as the MACD confirms the positive maturity intercept in the 4-hour period. 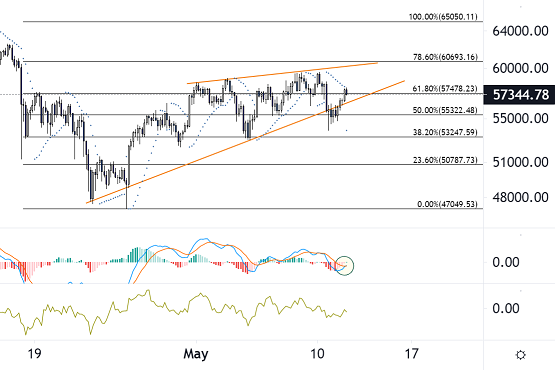 Ethereum is pricing around $4,300, up 3% in the morning hours. The ETH/BTC distance remained above the resistance zone with Ethereum dominance reaching 20% ​​and it gives approval for the continuation of the rise. For this reason, institutional supported FOMO continues to dominate rather than negative market sensitivity. The Ethereum Trust fund of Grayscale, the largest institutional investment firm, is showing strong buying momentum. Purpose, the first ETH ETF to be approved, has been watching with 90% profit since its start date, while 31,000 Ethereum added to the fund in the last 20 days are one of the indicators of strong demand. Chain data, on the other hand, is giving a new ATH on Ethereum holding addresses, while the amount locked for the 2.0 upgrade has approached $19 billion.

Considering the ETH/BTC parity technically, the parity, which completed the correction movement with the 4-hour candlestick closing in the $3,850 zone, refreshed the record in the $4,380 zone with its reaction from here. Fibonacci resistance for the parity, with current support at $4,160 for possible retracements, is located in the $4,570 zone. This shows that there is no other resistance in front of the parity for a possible rise of 5% in the short term. The MACD confirms the rise with histograms and maturity intersections that started to rise in a positive direction in the 4-hour period. 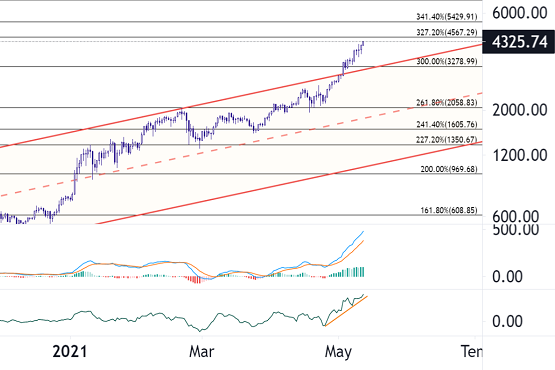 The AVAX , which increased by 2.7% in the morning hours, is priced at $38.00. AVAX, which fell to the $29.00 level with the recent decline in the market, continues its recovery. When we consider the AVAX/USD parity technically, we see that it has continued its movement within the rising channel since April 23. For AVAX, which continues its upward movement between the channel bottom and mid-band, the $39.00 level corresponding to the Fibo'61.80 level is an important resistance, if this resistance breaks up, we think the price will continue to move towards the $47.00 level, which corresponds to the Fibo'78.60 slice. If the resistance at $39.00 is not broken, it is possible that the price will continue to move between the lower and mid-band of the channel in the short term. We maintain our positive view for AVAX, which continues to move within the rising channel. 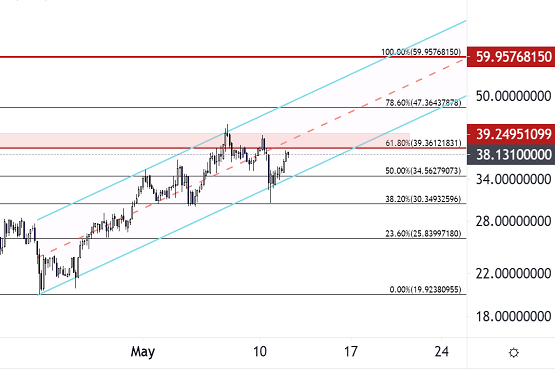 Ripple is pricing at $1.50, up 2% in the morning hours. In the case between the SEC and Ripple, the judge gave the date May 21 for a new teleconference. The parties will detail the disputes over document generation during the meeting. While the positive weather in favor of Ripple is a re-trigger for pricing, the positive perception of the market can also be seen as news-oriented rises rather than results. Ripple CTO McCaleb continues to sell million-dollar XRP, the amount in his wallet has decreased to 500 million XRP. In line with the data published by Whale Alert, although we see that XRP transfers are at a high volume, the prices show the continuity of the buying appetite by clinging to the strong support zones.

When we consider the XRP/USD parity technically, the parity continues its movement within the rising channel. Moving towards the channel mid-band, XRP was unable to break the upside even though it tested the Fibo'61.80 retracement level at $1.54. If Ripple fails to break the resistance at $1.54, the price trend may seek support at $1.41, which is the lower channel zone, while $1.41 is also in strong support as it is the Fibo'50 zone. For the parity that managed to complete its daily close above $1.54, the $1.60 then $1.73 resistances could be tested. The outlook is positive but the cruise is near horizontal. 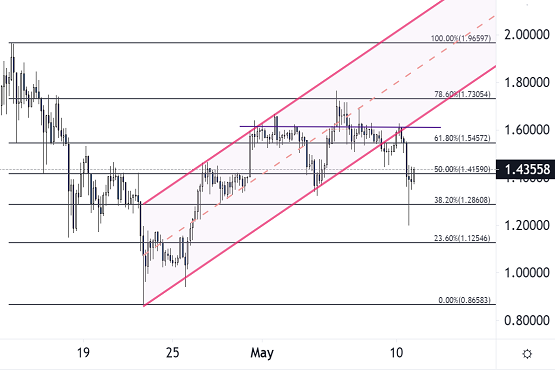 LTC is pricing at $387 levels this morning, gaining nearly 2% in value. LTC, which has recently achieved a positive divergence against BTC, still maintains the strength of this divergence. We see LTC as a good investment tool for investors who hold a large amount of Tether transferred to the stock markets with the withdrawal in the markets, due to the momentum it captures and its positive divergence against Bitcoin. However, when we look at the 7-day averages of active addresses and new addresses in chain data, we see that they have reached the highest levels of this year. This metric, which corresponds to the increasing interest of investors, we think that LTC will maintain its rising trend in the coming days.

When we consider the LTC/USD parity in a technical sense, LTC, which has continued its price movements within the channel it has created since November 2020, started its upward movement towards the peak of $413 with the support it received from the mid-band of the channel after the withdrawal in the markets on May 10. We think that LTC, which has supported the $382 level, which is the 127.20% slice of the Fibonacci correction, will continue to move towards $450 - $470 if it can rise above the peak price with a possible buy signal in the 4-hour period. 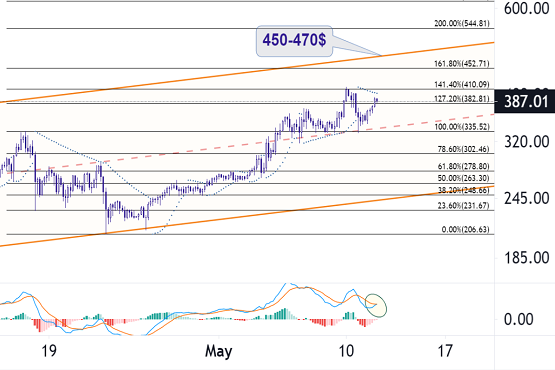 Following a horizontal course in the morning, LINK  is trading at $49.00. LINK, which was pulled up to the level of $40.90 with the decline in the market in the past days, showed a rapid recovery. When we look at the 7-day average of the net flow to the stock markets, we see that it has reached the lowest levels in the last 2 months. This metric shows that the amount of LINK kept ready to sell on exchanges is gradually decreasing and investors' belief that LINK will rise.

When we consider the LINK/USD parity technically, LINK, which experienced rapid price pulls to the mid-band of the channel on May 10, maintained the previous peak at $44.40 and turned the price direction up again. It continues to move towards the upper band of the channel by breaking the $46.70 level, which is an important resistance. We think that the upward movement will continue if the $51.20 level, another bullish resistance, breaks and holds above it to signal a buy MACD in the 4-hour period. When the previous peak of $53.00 is exceeded, our upward forecast continues towards our target level of $60.00. 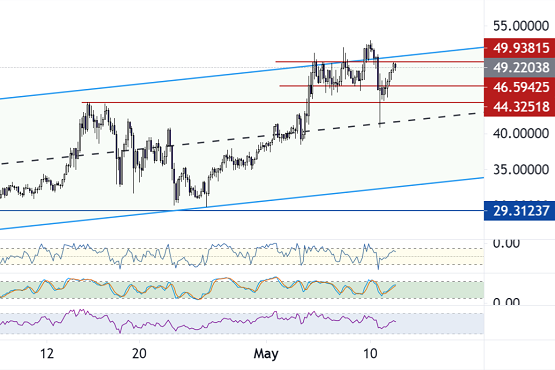 Basic Attention Token, which is flat in the morning hours, is priced at $1.39. When we examine the BAT/USD parity technically, BAT, which has been moving in the rising channel since April 23, has retreated to $1.25, which corresponds to the Fibo'50.00 correction level with the decrease in the market recently, and afterwards, it started the upward movement again and continued its upward movement by breaking the Fibo'61.80 retracement level upwards. With this rising trend, if BAT continues to move towards the mid-band of the channel, we expect it to encounter a resistance at $1.48, which corresponds to the Fibo'78.60 level. If a downward price movement starts again, we expect the $1.34 levels to act as a support. We maintain our positive view for BAT, which does not have any negative news flow and continues its movement within the rising channel. 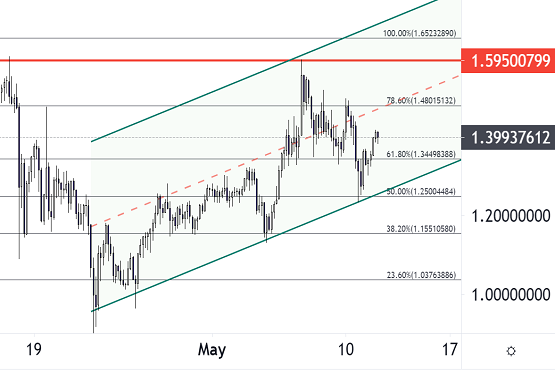