Co-founder of Poolin, one of the biggest mining hubs in the world, Li Tianzhao has stated that with the upcoming Ethereum improvement proposal, miner income has fallen slightly, but this development could move Ethereum to between $ 5,000 and $ 6,000.

The People’s Bank of China Deputy Governor, Li Bo has stated that Bitcoin and other cryptocurrencies should be considered as investment alternatives. Bo also added that they are studying regulatory policies towards these assets and the cryptocurrencies will play a big role in the future.

South Korea’s Office for Government Policy Coordination has stated that new regulations will be launched to eliminate the speculations and the illegal cryptocurrency transactions.

Upon its partnership with a cryptocurrency platform, TIME magazine will start to accept subscription fees in Bitcoin. Although the crypto payments is only available in the USA and Canada for now, it is planned to be widened to the other parts of the world.

Bank of England has started a team to create and coordinate a central bank currency in the UK. The team will study the working principles of CBDC and any potential risk regarding it. Together with China and Japan, the United Kingdom is one of a few countries conducting a study on CBDC.

According to the data compiled by The Block from the applications made to the Securities and Exchange Commission, the firm's largest shareholders sold a small portion of their shares between April 14 and 15.

Bitcoin is trading at $54K this morning with a 2.6% loss. Due to the weakening of the risk appetite in the general market, we see that the buyers are not long-termed in the market. However, we do not have enough data to be able to call a trend transformation. Judging by the unrealized profit/loss ratios, it is still at the point of belief, with a high leverage over the market. On the other hand, the fact that liquid and whale accounts also increase Bitcoin assets, the increase in the amount of BTC withdrawn from the exchanges and our staying in the channel is positive in terms of outlook. The news of the regulation on Bitcoin in South Korea may be pausing the market at this stage. However, these expectations on the basis of news have not yet turned into an action. The view that Bitcoin made in China is an alternative investment tool can also create a positive news effect.

When we consider BTC/USD technically, the upward channel that has been formed since October continues. Withdrawals were also met within this channel. The lower band of the 30-day Bollinger band goes through channel support. Therefore, this intersection at $51,900 makes the current level the main support point. The outlook is weak in the daily period. However, as long as the holding on the support point continues, reaction movements may come. The $55,000 level is our resistance zone in this sense. The view is weak, the course is horizontal. 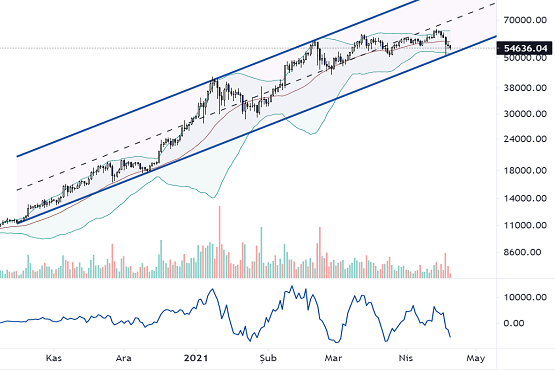 Although Ethereum has been moving within the rising channel that has existed since the beginning of the year, the risk in the market has remained weak for the last two days due to the loss of appetite. While we cannot see a clearer market recovery data yet, the continuation of the decreases in Ethereum in the meantime may trigger it to go out of the channel. ETH 2.0 staking is at a record level. ERC transfer fees did not drop sharply after the Berlin hard fork. However, given the Ethereum premiums and the amount of Ethereum removed from exchanges, it gives us the signals that these declines may not be long-lasting.

When we consider the ETH/USD parity technically, short-term pressures persist. Still, the medium-term rising channel level is passing through $2,050 level, and if this support is broken, we can talk about $1,930. However, as we have reached the main support level, possible reactions will remain temporary as long as they do not rise above $2,200, and they will be able to follow their course back towards support. 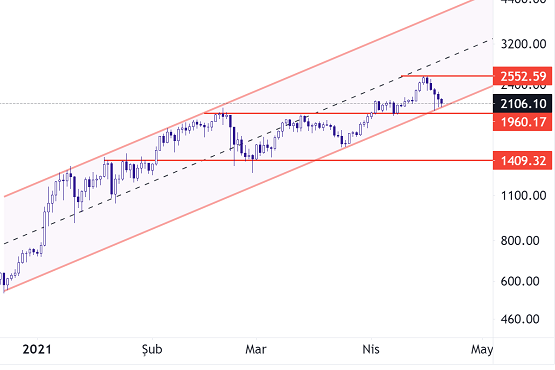 The AVAX/USD parity is in the $24.30 zone this morning with a 7.25% price decline. The fact that AVAX retreated at $24.30 after the $60.00 journey shows that the current levels of the parity are a strong resistance in the medium term. For sags, the Fibonacci starting zone of $23.90 will act as resistance. The downturn that the parity started in mid-April will be broken after leaving $30.00 behind. Until that stage, sales pressures may create a consolidation phase in the parity. Buying appetite can be expected to increase at $30.00 and above for new buyers to come. Therefore, a wait-and-see strategy may stand out as a cautious stance in the current general market pressure. 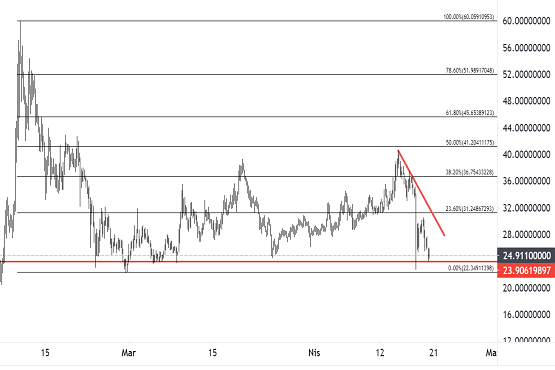 The XRP/USD parity has retreated by 2.7% this morning, pricing around $1.27. After reaching the local peak of $1.97 and approaching the $2.00 limit, the parity is accompanied by sales, with the psychological resistance of $2.00 being compelling with the general decline in the market and the fact that the intimidated news-based increases manifest themselves as a correction in pricing. While the downward wave across the market is continuing, when looking at Jed McCaleb's wallet follow-ups, it is seen that its sales continue.

If the XRP/USD parity is technically taken into account, there is a downtrend following a local peak of $1.97 for the parity, which is still far from the $3.84 record it tested in 2018. With a key support level of $1.15, a trend breakout will follow at $1.40. We will wait for closures above this level to be able to talk about a new rally. Oscillators are not yet in the recovery phase, Stochastic confirms the decline in the hourly period. The outlook is in the direction of the downtrend in the short term. 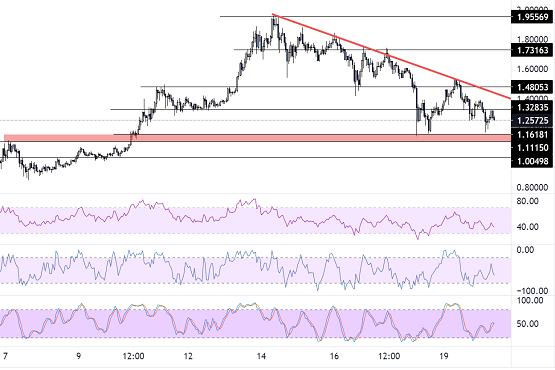 Litecoin is pricing in the zone of $237 with a 10% retracement this morning. Looking at the on chain data, it is seen that after we received the bottom buy signals with Bitcoin, the amount of new addresses in Litecoin has shown a rapid increase in recent days and stepped to the highest level in the last 3 years. Meanwhile, successful transfers are on the rise with active, new addresses. Although it is not reflected in LTC pricing yet, it can experience a rapid pricing after the sales pressure in the market dissipates.

If we examine the LTC/USD parity technically, the parity is on the bullish channel, pricing below $250, the last slice of Fibonacci, creates a weaker outlook, while the next slice appears as support at $224. The channel sub-band is in the $210 zone, while the MACD indicator is in the sales breakdown phase in the daily period. While these indicators, which confirm the retractions, are seeking a response zone in the parity for the short term, we are in the lower-middle zone of the channel, even though the lower channel of the channel passes through $205. Therefore, the responses may remain short and the downward pressure may be suppressed towards the $205 levels. However, since it will remain in the channel, this movement can be considered as a support test. 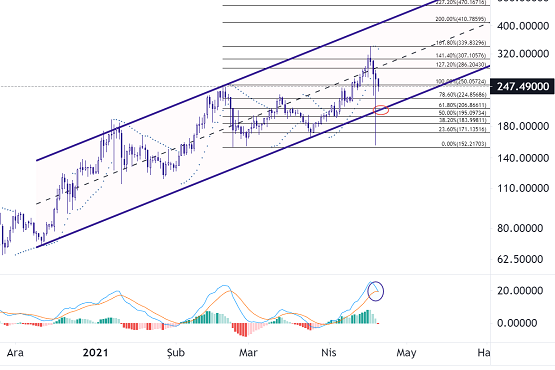 Chainlink is above the $35.70 level with a 0.8% price decline against the dollar this morning. In LINK, while new addresses reach the highest level of the month, active addresses are also moving, but the amount of LINK entering the stock markets has increased rapidly in the last three days. Although entries to stock exchanges are generally read negatively, it is seen that accounts with small balances are effective. This shows that new investors actually create selling pressures in the face of the need for a market recovery. When these short-term profit purchases come to an end, they are expected to support the upward momentum.

If the LINK/USD parity is examined technically, the trend support zone for the parity, which continues its upward trend in the daily period, is $33.00, while the Fibo'61.80 zone is around $30.00. If the correction deepens, there is a triangular compression with a resistance of $37.00, followed by the reaction zones that are suitable for evaluation. Closings above $37.00 can be expected to be decisive for a new bullish scenario. The MACD is weak on the daily chart, confirming support seeking. 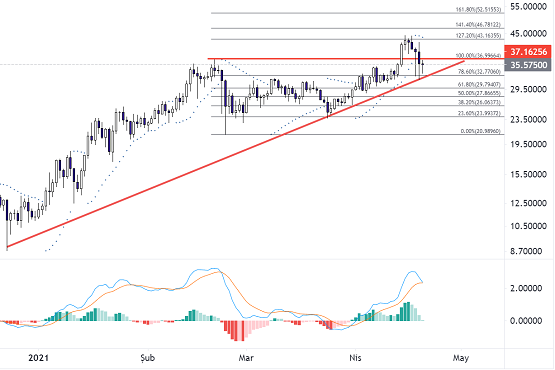 Basic Attention Token is priced in the $1.18 zone, negatively diverging with a 10% price drop this morning. For pricing in the 3-hour closing phase on the Fibo'50 zone, making this level a support or resistance may be decisive. For possible reactions, the initial resistance level is located above $1.25, while for pricing below $1.38, a horizontal trading strategy may come to the fore. Above $1.38 it is likely to be accompanied by a further bullish reaction. Oscillators analyzed in a 3 hour period are close to bottom levels but are not yet in the oversold zone. For this reason, when it starts showing signs of recovery from the bottom levels, it can receive a new upward confirmation on the basis of indicators. In BAT/USD, where the uptrend is still continuing, the trend is passing at $1.11, which corresponds to the Fibo'38.2 zone. As long as pullbacks or sales pressures stay above this level, they may give a chance to react. 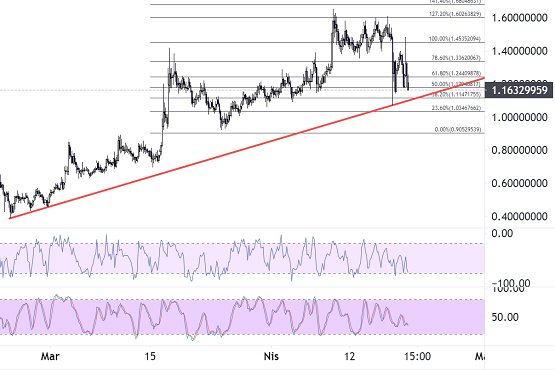