Morgan Stanley Funds Are Now Able to Invest in Bitcoin

In a SEC filing, Morgan Stanley where the institutional investors are prevailing, has stated that it will provide services in cryptocurrencies to its customers. It is also stated in the document that the 25% of its 12 existing institutional funds could be allocated to cash-settled futures and investments with the Grayscale Bitcoin Trust.

The Ministry of Treasury and Finance made an official press release regarding the news that data was requested from crypto money exchanges. In the press release, which stated that MASAK is working in many areas related to financial crimes, tax rumors were also ended.

The Director of the Bank of China (PBoC) Research Bureau announced that the PBoC has begun technical testing of the cross-border use of China's central bank digital currency.

Glassnode's new research confirms that there is an increase in the amount of Bitcoins held for periods between 1 and 6 months, and it has been the demand which is behind the movements to the last $ 60,000 level. According to Glassnode's data, BTC purchased between $10,800 and $ 58,800 now represents 25% of the total supply with no signs of slowing down.

Fastest Rise in 38 Years from US ISM Manufacturing Data

In the USA, the ISM manufacturing index has risen to 64.7 in the previous month showing the fastest growth since 1983. In the index, above 50 indicates growth while below this level means contraction.

Bitcoin call options draw higher values compared to put options. The bullishness seems to be rising with Bitcoin options listed on the dominant Deribit exchange. New records in cryptocurrency trading are only 4.6% away.

Bitcoin tested the $60,000 level for the first time in about two and a half weeks. In the information we have presented to you by blending basic and chain data for a while, we have predicted this rise of Bitcoin and stated that it is a fundamental rise. In addition to institutional buyers, Morgan Stanley also applied to the SEC to buy and sell Bitcoins for their funds. At the same time, Purpose, the Canadian ETF, as well as the increase in Bitcoin's continuous funding rate confirms the demand. Bitcoin ended March with a 29% increase. Looking at the past charts, it is seen that Bitcoin was generally green in April. In the last 10 years, only 2 April has passed with a decrease.

When the BTC/USD parity is technically analyzed, the recovery in the ADX indicator may indicate that the consolidation that has been seen for a while may have come to an end. In addition, the 7-day DEMA cut the 30-day DEMA to buy, holding the previous record of $58,400. If the $59,700 permanence is achieved and the $61,800 resistance is passed, the course can be expected to be followed by new records up to the 63,000 zone. The outlook is positive, the course is in an uptrend. 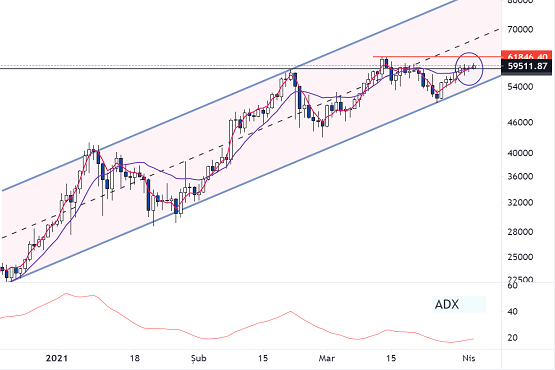 Ethereum hit the $2,000 level for the first time since February and tested the $2,007 level with a 1.5% recovery this morning.Due to the fact that Ethereum has been discounted for a while despite the increasing transaction fees and the concern created by the April 1 protests, it was seen that while Bitcoin was heading towards $60,000, ETH fell to the $1,500 band. Now, in the ETH-BTC scissor, Ethereum seems to have an advantage of 3.5 points. While we don't think the EIP 1559 improvement that caused the miner protests has been priced yet, we can see the fast pricing of cheapness in Ethereum.

When the ETH/USD parity is technically analyzed, the downtrend that has existed since the record of $2,040 was broken. The midpoint of the uptrend channel, which has existed since the beginning of 2021, has been passed and we are now moving forward in the mid-upper part of the channel, where the uptrend movements are more accelerated. The upper band of the channel passes at $2,160 and we can see that the volume may decrease a little more due to the holiday in the USA today. 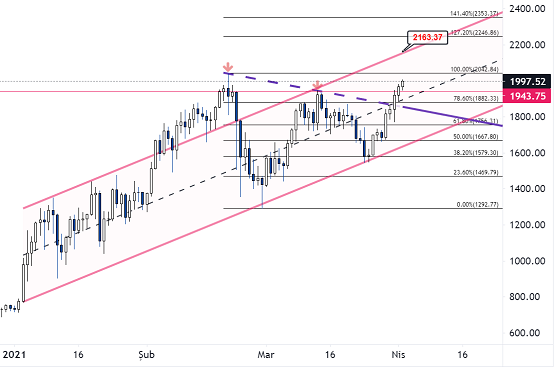 AVAX is trading at $29 this morning, up 2.1%. When the AVAX/USD parity is technically analyzed, ADX, which measures the strength of the trend, has not started to recover yet. The indicator fails to go above 25 and shows us that the consolidation continues. In addition, AVAX held firm hold at $28. If it can break $29, it might start its rise, but ADX says it is not yet ready for it. AVAX, which remains slow despite the rise of Ethereum and Bitcoin in the market, may not satisfy its investors in this respect, but it is important for long-term investors to stay above $28 and these levels are still more discounted. 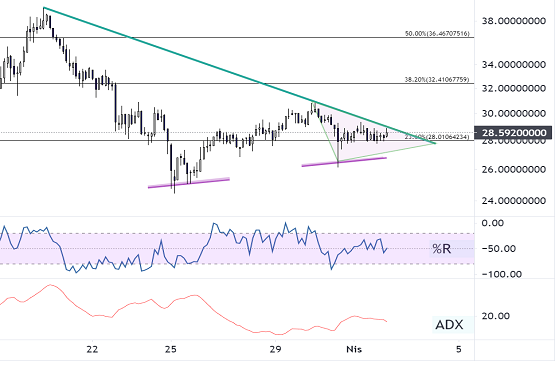 On the day when Bitcoin and Ethereum were active, Ripple remained a little more stable. In XRP, which is traded below the $0.60 level in the current outlook, the fundamental movements are higher than the technique. Ripple was previously proposed for Digital Euro (CBDC) in the report of the Federal Bank of France. In her statements yesterday, Lagarde said that the digital money studies and the decision will be made within a few months. It would not come as a surprise to hear about Ripple in this respect. On the other hand, Ripple CEO Garlinghouse considered the possibility of losing the case and reiterated that Ripple was growing outside the US. For now, the lack of a result from CBDC and case reports or a dominant scenario has made XRP the subject of horizontal transactions.

When the XRP/USD parity is technically analyzed, we see that two opposite trends are formed. Moving into the congestion zone in the midst of downward and upward trends, if XRP can break the $0.57 level, it could continue its upward trend. In Ripple, where the target is $0.64, the horizontal movement continues in the $0.55 range. 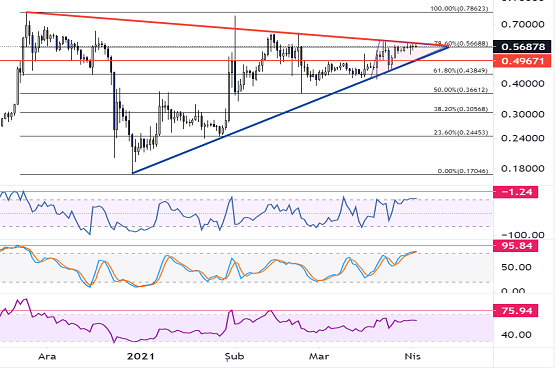 Litecoin is trading at $203 this morning. With the recovery in the number of active and new addresses, Litecoin, whose price movements become more evident, continues this rise. In terms of monthly performance, Bitcoin increased by 17%, while Litecoin remained at 7%. For this reason, Litecoin's movements can be differentiated more positively than BTC.

When the LTC/USD parity is technically analyzed, although the two-month downward trend that has existed since the $250 level continues, movements within the minor bullish channel continue. When we consider it in the daily period, the Bollinger middle band of 30 length passes through the support of this minor channel. The Bollinger upper band is also crossing the channel midpoint of $230, supporting the upward trend. The outlook is that the $201 level has become intermediate support and the trend is continuing its upward trend. 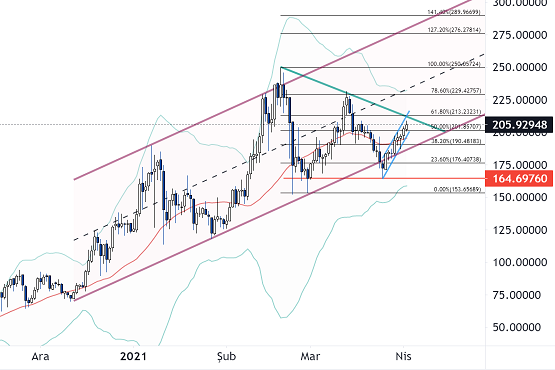 LINK continues to trade above $30.00. Chainlink, which has been trading with a flat course this morning, remained discounted compared to both oracle tokens and ETH, as it is an ERC20 token and has a market size of $13 billion. Ethereum showed a 17% increase in monthly performance, while LINK only changed 1% during that time period. For this reason, LINK, which draws attention with its increasing network value (market volume) and its discount, may want to close these scissors.

When the LINK/USD parity is technically analyzed, the parity continues its accelerated rise on the minor uptrend that it started on March 24. He says that the flag formation above this trend will start if the $30.80 level is broken and it can watch the course of $35. Therefore, as a result of technical evaluations, we continue to like LINK and as we stated in yesterday's Crypto Zoom post, we expect the $60 level in the medium term. Since the place of purchase will be important in short-term transactions, points close to resistance should not be preferred. 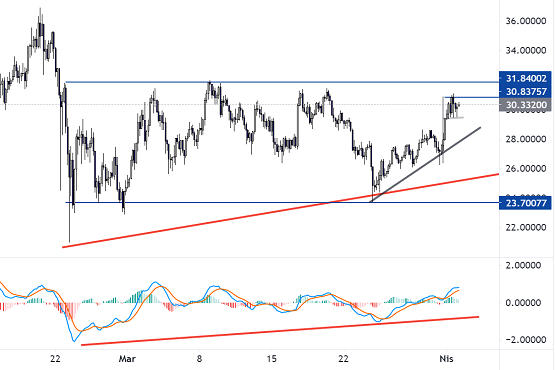 Basic Attention Token has not been able to break the $1.20 level in the past week and is currently trading with a horizontal change. There was no significant change in the number of new and active accounts. In addition, the increase in BAT supply in stock exchanges also negatively affected the price of BAT in this respect. Gradually, the supply of BAT continues to decrease. It may be a trigger for BAT that has been on the horizontal band for a while.

When we consider BAT/USD technically, the downward trend that has existed since the record level of $1.41 continues. The $1.17 level, where the Fibo'50 level has passed, is also the common point where this descending trend has passed. Therefore, the movements can be expected to accelerate as they break $1.17, but the on-chain data says there is a little more time. The outlook is horizontal but the course maintains its positive trend. 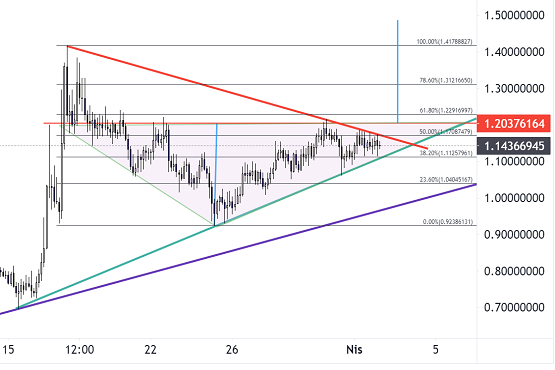