According to SEC documents, Morgan Stanley reported that it owns a large amount of Grayscale BTC Trust in multiple portfolios. The largest of these portfolios includes 928,051 shares held by Morgan's Insight Fund.

SIMON Markets has partnered with NYDIG to collaborate on issues such as Bitcoin-backed borrowing. SIMON's asset managers serve clients with total assets of more than $5 trillion.

The amount of Bitcoin held by companies and some governments worldwide is constantly increasing, and about 8% of BTC, which has a total supply of 21 million, is in the hands of these institutions.

The partnership enabled Chainlink's Price Feeds oracle system for decentralized finance (DeFi) to launch live on Solana Devnet with updates in less than a second.

The data shows that the total value (TVL) locked in all DeFi protocols reached an all-time high of $157.06 billion on August 22.

Bitcoin, which lost about 2.49 percent in the morning, is priced at $47,827. According to SEC documents, Morgan Stanley reported that it owns a large amount of Grayscale BTC Trust in multiple portfolios. When we examine the chain data for BTC, where the positive news flow prevails, the Puell Multiple metric, which allows us to examine the market from the miners' perspective, indicates that the miners are not yet ready to sell the BTCs they produce.

When we consider BTC/USDT parity technically, BTC continued to move prices within the existing rising channel as of July 20, and although it rose to $49,400 with support from $47,200 yesterday, it experienced withdrawals again this morning to test the channel subgroup. When examined over a 4-hour period, MACD has recovered, but the sell signal continues. BTC, which has regained support from the channel sub-band as of the morning hours, can expect rises up to $50,491, which corresponds to its previous high, if the channel sub-band does not break downward. 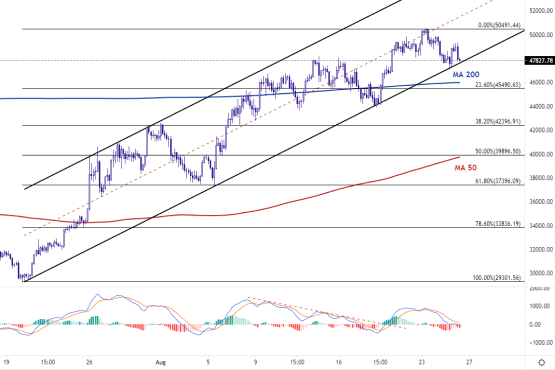 Ethereum, which lost about 2.85 percent in the morning, is priced at $3141.56. The data shows that the total value (TVL) locked in all DeFi protocols reached an all-time high of $157.06 billion on August 22. This is an important metric for the DeFi sector and shows that confidence in the sector is growing on the part of investors. For ETH, which is home to a large part of the DeFi sector, the increase in TVL value is positive.

When we consider the ETH/USDT pair in technical terms, the trading volumes during this period were below the average for the last 20 days for ETH, which exhibited horizontal price movements in the band of $3350 to $3000 as of August 7. It continues to sell MACD in the daily period. With the upward breakdown of the price squeeze for ETH for some time, the rises will accelerate again. If the withdrawals for ETH continue, we expect the $2900-3000 band to work as a support. 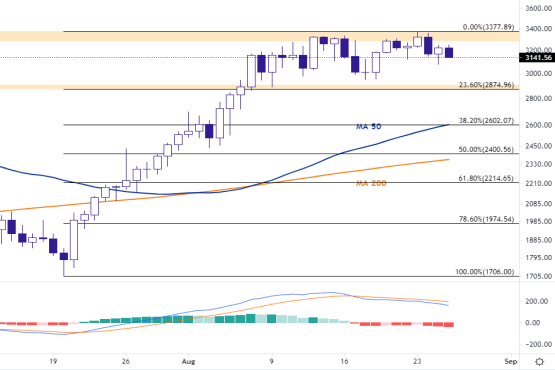 AVAX, which lost about 2.21 percent in the morning, is priced at $45.31. When we technically examine the AVAX/USDT parity, AVAX, which has provided approximately 530 percent return to its investor in the last 37 days, entered the correction period that we mentioned in the bulletin yesterday. AVAX, which has been up about 24% since its peak, is seen as providing early morning support at $44.5. In case of deepening the correction, the $36-40 band is read as the next support area. 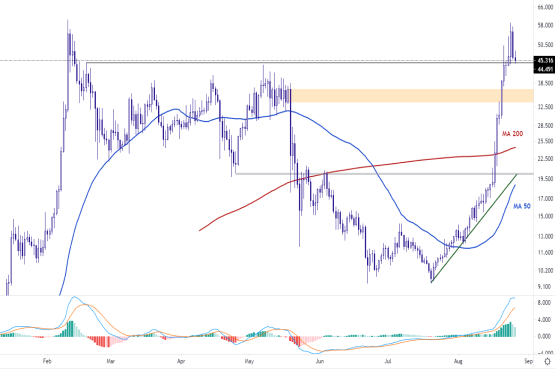 Ripple, which lost about 3.05 percent in the morning, is priced at $1.1491. When we consider the XRP/USDT pair technically, the downward price movement continues this morning for XRP, which has been stuck in the price as of August 15th. Despite market-wide rebounds yesterday, today marks the start of a sell-off. We expect the withdrawals at XRP, which has returned about 160 per cent to its investors over the past 5 weeks with a sharp upward movement, to end at the support level of $1.06. 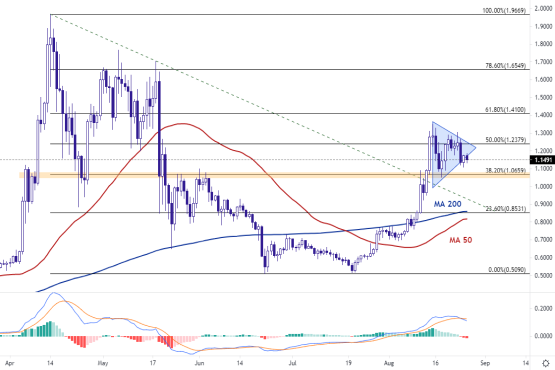 LTC, which lost about 3.52 percent in the morning, is priced at $171.39. When we consider the LTC/USDT parity technically, LTC, which appears to have accelerated the price retreat movements with the downward break of the rising trend, closed yesterday at $175.87, which corresponds to Fibo'38.20, but has fallen below this level again this morning. Macd maintains the sell signal during the daily period. If the support level in the $160-$163 band breaks downwards for LTC, there may be withdrawals towards $150 with a 50-day moving average. 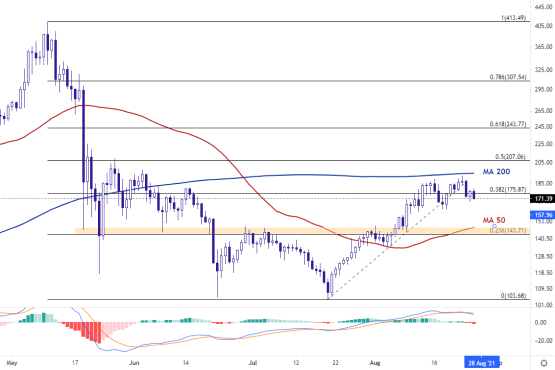 LINK, which lost about 3.12 percent in the morning, is priced at $25.76. Looking at the news flow for LINK in the last 24 hours, it appears that a partnership has been established with Solana. The partnership enabled Chainlink's Price Feeds oracle system for decentralized finance (DeFi) to launch live on Solana Devnet with updates in less than a second. Positive for both projects.

When we examined the LINK/USDT parity technically, LINK, which received a reaction from its 200-day moving average and broke the support level at $26.67 with this reaction, rejected this level yesterday, but the upward breakdown did not occur. It continues to sell stock in the daily period. The withdrawal for LINK can be expected to deepen to $22.64. 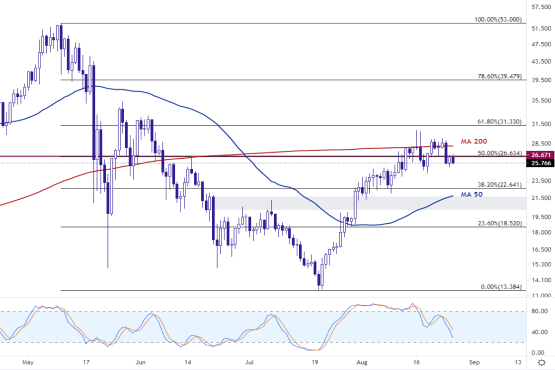 BAT, which lost about 3.2 percent in the morning, is priced at $0.8357. When we consider BAT/USDT parity in technical terms, BAT continued its price movement within its existing rising channel as of July 20, and yesterday it reached above its 200-day moving average with support from the $0.801 zone, which corresponds to the channel sub-band and Fibo'23.60. MACD maintains sell signal over 4-hour period. If BAT can hold on to its 200-day average again, it could see rises towards its previous high of $0.91. 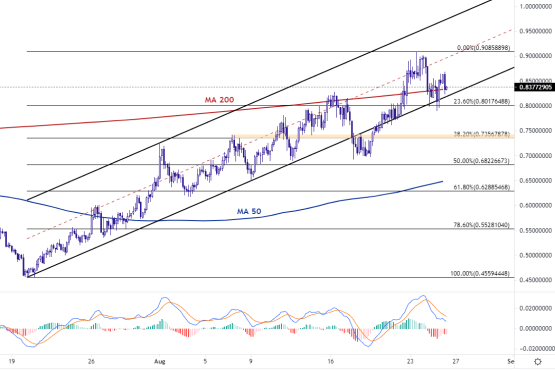