US-based giant bank Morgan Stanley has become the first major US bank to offer access to the accredited asset management clients to Bitcoin funds. The bank announced that it will provide Bitcoin services to its customers who have "aggressive risk tolerance" and at least $ 2 million in assets.

After the SEC had requested a breakdown of all personal expenses of Ripple's founders, Ripple argued that this was a breach of personal privacy. In the latest statement of the SEC, it has been emphasized that the request to access the records is the most important and secure evidence regarding XRP expenditures.

VanEck's ETF Application is Under Evaluation

The application of VanEck's which will be, if accepted, the first Bitcoin ETF of the USA has been under official evaluation of the US Securities and Exchange Commission (SEC). The SEC has a 45-day pre-decision period for the offer made.

Five Times of Value Paid to BTC Sale in France

Hundreds of BTCs seized by France in an operation were sold by the state. One of the customers who bought Bitcoin at the auction made a bid of $ 32,000 for 0.11 BTC, approximately five times the spot value.

The World Bank has prepared a new blockchain report in collaboration with the International Monetary Fund's digital advisory team. In the report investigating the connection between different blockchains, it has been stated that easy money transfers between Ethereum and XRP Ledger networks are promising for XRP in the long term.

New York Mellon, the oldest bank of the USA, announced that it has invested in cryptocurrency company Fireblocks. The well-established bank, which has $41 trillion in assets under its management, stated that the demand for cryptocurrency assets is at a very serious level.

Although Bitcoin corrected $56,000 after testing $60,100 yesterday evening, the impression is that it has accumulated at the bottom, that is, the price has accumulated. The transition of Morgan Stanley and NY Melon Banks to the crypto business will make a good success. On the other hand, the decrease in liquidity buying positions, a serious decrease in the sales of long-term holders and the increase in the frequency of BTC withdrawn from the stock markets show us that breaking $60,000 permanently in BTC is not a difficult target.

When BTC/USD is technically analyzed, the prices which have remained at the bottom of the uptrend channel existing since the end of February, confirmed the upward trend. Yesterday’s double bottom in the range of $54,000 - 57,000 also saw the target of $60,000. Yesterday's $57,000 retreat tested and consolidated the neckline of the duo bottom, and the reaction came this morning. Therefore, it is seen that there is an accumulation in Bitcoin and the clouds are starting to settle on price bases. The positive outlook and course continues, with $57,000 intermediate support and $56,000 channel sub-band support. For this reason, it shows that breaking $60,000 permanently in BTC is not a difficult target. 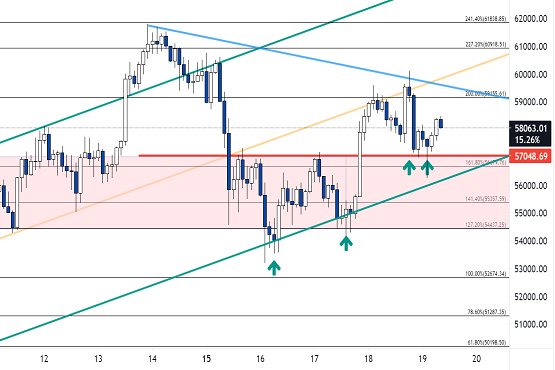 Ethereum has been moving in a horizontal trend since early March, with a good retention at $1,750. ETH 2.0 staking amount reached an all-time high. The fact that the amount of ETH held by decentralized exchanges, which is 17.5% of the total supply, is more than BTC, which is held at 12.7%, was also a factor that prevented fluctuations in ETH. The ETH supply, which was last active 6-12 months ago, dropped to a 21-month low. Finally, the decline in the total transaction volumes transferred between the stock market and wallets is also healthy in terms of price stabilization.

Although ETH/USD supports the basic technique positively, the OBO formation formed in a 4-hour period in the technical view shows that if the $1,730-1,750 zone is broken, selling pressure up to $1,570 may occur. On the other hand, although a secondary uptrend occurs after leaving the bullish channel and pulling back to this channel yesterday, if 1830 cannot be broken upwards, OBO formation pricing may gain weight. However, for now, this scenario is a little behind the bullish scenario. The outlook is horizontal movements but in an uptrend. 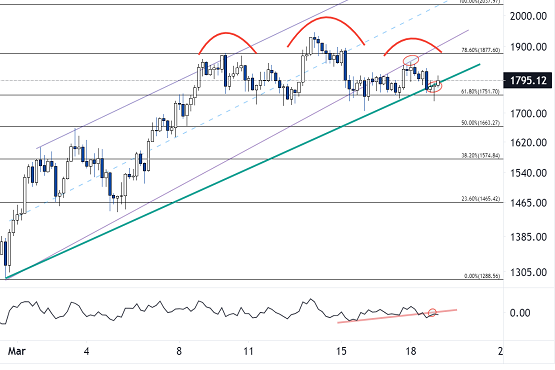 AVAX/USD parity is positive on a daily basis with an increase of over 3% this morning. Prices around $34.20 started to watch at the upper band of the channel by breaking the middle band of $32.70 upward. The $34.20 level is the resistance zone and we will follow the break of this level before the upper channel of $38.00 comes into question. Since the pair is declining in volume, if the resistance of $34.20 creates pressure, it is possible that the minor rise will end and the pair will bring support for $32.70. For now, the outlook is positive, near horizontal. 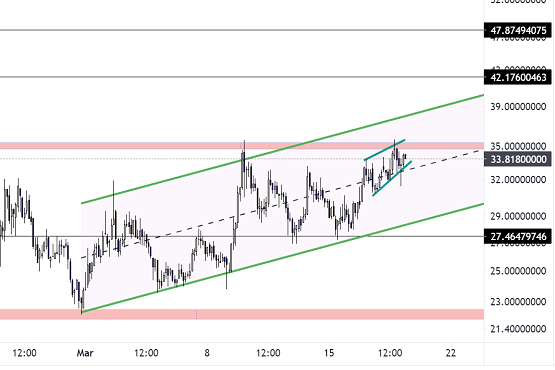 Ripple is pricing in the zone of $0.47 this morning, up almost flat on a daily basis. Some new developments in the SEC-Ripple correspondence process have put pressure on pricing, and while there is no negative divergence for XRP, bullish moves are in the way. After the SEC requested Ripple to report personal expenses, Ripple's lawyers objected, interpreting the move as a breach of privacy. In the latest report written by the SEC, it was stated that XRP sales are used as a means of financing personal expenses for Ripple founders, and this illegal situation can only be proven by bank statements. SEC's persistent and oppressive attitude is read negatively for XRP investors and investor candidates.

If the XRP/USD parity is technically analyzed, the prices in the $0.47 zone are horizontal in the mid-upper zone of the Bollinger bands, and it is seen that the bands are in the squeeze phase on the 4-hour chart. Although this signals a weak chart to be followed by short candles for a while, accelerated moves are expected after the squeeze process. The flatness between the $0.46 Bollinger mid-band and the $0.49 upper channel is the initial support and resistance levels. Although the outlook is positive on the basis of oscillators, there is no strong bottom return movement yet. 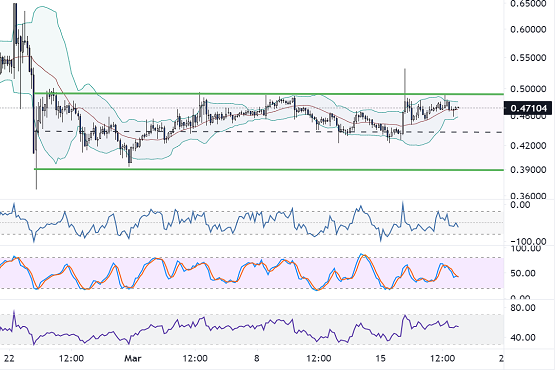 Litecoin is pricing at $202, up 1% this morning. Litecoin, which has a correlation with Bitcoin in the 0.98 zone, has lowered the correlation level to 0.79. And the closer this figure to 1, the more it will be similar to Bitcoin on the basis of returns. For this reason, the negative situation in the said horizontality or the return race seen in LTC is regarded more negatively. The monthly scissors are 26 points, and a rise of 26% means to set the record for the last three years for Litecoin. Although 26 points are not completely closed on the Litecoin side, the price increases with buyers may trigger some increase. On the other hand, chain data show that LTC should be above the said level according to the market value and transaction volume.

When the LTC/USD parity is technically analyzed, it is seen that the positive trend continues in the current bullish channel, but the $204 level in the Fibonacci 23.60% slice is the resistance zone and pressures the prices down. Although it has been tested many times, the fact that the breakdown is not supported in terms of volume indicates that the $204 level is strong resistance, so the closings on the resistance can leave the selling pressure behind and relieve the pair. The $220 level in the channel mid-band will be the first resistance above $204. 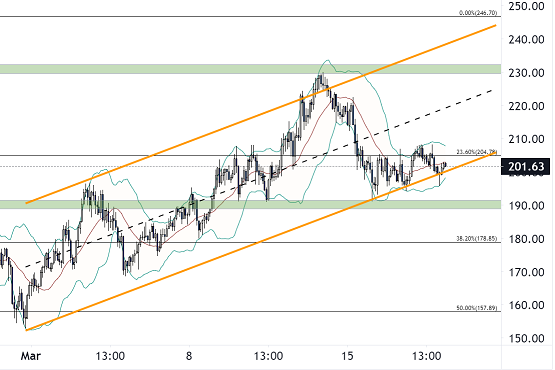 Chainlink draws attention with the previous day and today’s Grayscale purchases. The fact that it is both a potential platform for dynamic NFTs and an option for institutional and accredited investors supports pricing in the macro part. The Chainlink network's various decentralized and verified data service is also strengthening its hand in the DeFi industry. All these metrics allow us to read Chainlink positively for the medium-long term.

If the LINK/USD parity is technically analyzed, the parity is close to the compression phase within the triangular formation boundaries. This image on the 4-hour chart signals an accelerated movement and a rise to $43.00 after the horizontal is left behind. Reactions above $31.50 and volumetric force will be followed to gain approval. For now, however, the horizontality between $27.00 and $31.00 continues to progress. 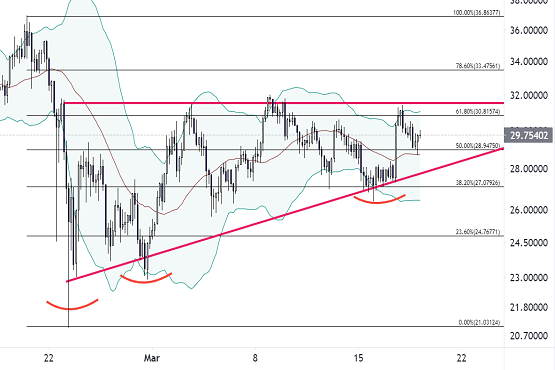 Basic Attention Token has become the most held cryptocurrency on decentralized exchanges. Being 2.5% behind this morning and negatively diverged from the general market, BAT became one of the most rising coins of the last days and it has also been one of the most popular tokens after Greyscale has added BAT products. Although there was some BAT outflow from the fund yesterday, this may be the profit realization following the recent movement.

Technically, BAT/USD has entered the bullish channel by testing the $1.30 level, which is the target of flag formations. Currently, the monthly DEMA is the main support at $0.97, while prices appear to have started to seek support. However, a new flag formation has begun to form in the range of $0.73 and $1.35, but entering this before confirmation can be risky. Since breaking of 1.25 (not exceeding) will give a confirmation, these levels can be followed. Apart from that, $0.97 became a significant level in the search for possible support. 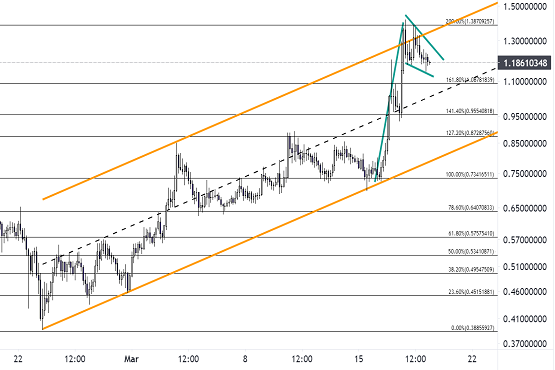