Venezuela, which has accelerated its Cryptocurrency investments due to the sanctions, stated that they will establish a decentralized exchange platform on the Ethereum base and that traditional assets can be tokenized and traded in addition to crypto coins.

The cryptocurrency ATRI of the world-famous giant game company Atari will be offered to the public in early November. The token, which will be issued by the company's Blockchain subsidiary, can be used in Blockchain games and game distribution platforms in the first place.

In his previous statements, ECB President Lagarde had said that the risks for the digital euro would be analyzed, after which the ECB published its most comprehensive report ever. In the report, which highlights the advantages and risks, it is stated that the final decision on digital Euro issuance will be announced in the middle of 2021.

Ripple, one of the most active players in the cryptocurrency industry, came up with a new agreement. Ripple has signed a partnership agreement with Guavapay, which has received an e-money license from the UK financial regulator.

Bitcoin Miner's revenue has fallen %11 in September. The major reason behind the fallen revenue is the decrease in BTC prices. Bitcoin gained over 25% in July and August while it closed September with an 8% loss. The decline in estimated revenues indicates that miners are selling their BTC and they’re not holding them for the long-term (HODL). It can be interpreted as the cost of mining is high, therefore miners want to buy from lower levels for their wallets. Furthermore, the market dominance of Bitcoin went up above 60% again, while it was declining to 57% levels for some moments. Which can mean some crypto investors are allocating their funds on Bitcoin from altcoins and stable coins.

There’s no major breakout on BTC/USD futures, which is slightly on the sell side today, and it follows a narrow band like the last week. The major trend is up but in the short-term, there’s a secondary downtrend because of selling pressure. The daily trends are passing by 10,600 and 10,450 levels. Also, BTC being in an uptrend and in a horizontal channel causes a fast recovery on prices. The support levels can be followed for reactions. 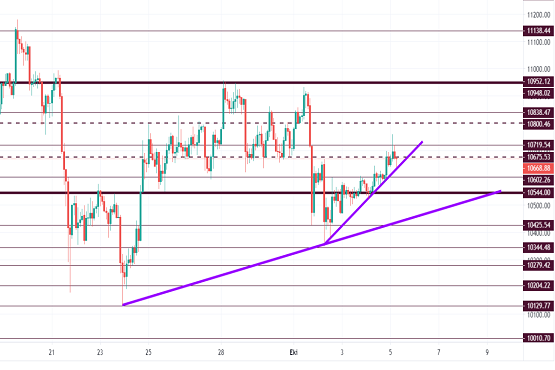 Ethereum price is up %1,5 this morning and tries to cover last week's losses. The dollar has been gaining after Trump’s announcement about his COVID test result is positive, Bitcoin and Ethereum had losses in parallel with USA futures and gold. On the other hand, the active addresses on Ethereum are increasing. Grayscale Ethereum Fund report states that Ethereum’s 2.0 update having a negative effect on prices which can cause further effects on movements. This week the markets will follow Trump’s health condition along with the news about the new stimulus package of the USA. 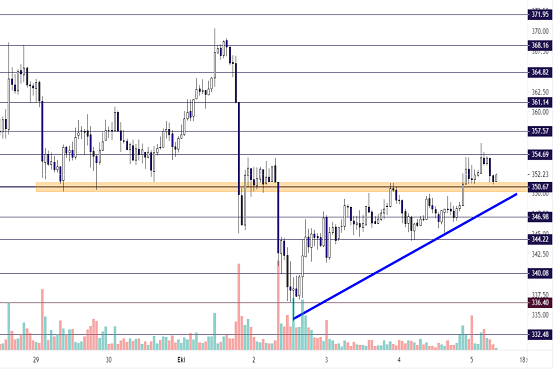 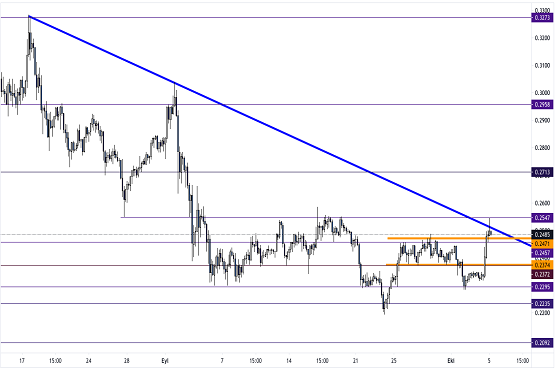 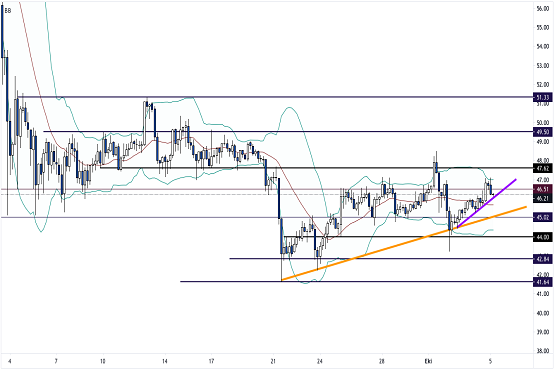