Off-chain data approved in collaboration with Mogul and Chainlink; It will allow Mogul to be added to its smart contracts and create an ecosystem that accurately measures costs such as film and production. Thus, this new platform will realize data integration with the real world.

Morgan Stanley Considerations To Launch Bitcoin Fund
Morgan Stanley, one of the largest banks in the USA, is considering investing in Bitcoin with a portion of the $ 150 billion fund. According to Bloomberg's report, the bank's Counterpoint Global unit is investigating whether it is appropriate to set up a cryptocurrency fund for investors.

Bitcoin miners made a total of $ 4 million in one hour, and this value has never been higher in a one-hour period. Part of this gain, which took place in the evening hours of February 11, is also due to transaction fees. Last week, while the transaction fees were $ 11 on average, it increased to $ 25 after the intensity after Tesla's purchase of BTC.

JPMorgan Could Enter Bitcoin Market In The Future

Daniel Pinto, co-chairman of JPMorgan Chase, one of the world's largest banks, stated that in line with the demand for Bitcoin, JPMorgan could also enter the Bitcoin market in the future. Stating that there is no big demand for now, Pinto stated that this will change over time and the customer demand will increase.

Jack Dorsey and Jay Z Build Bitcoin Fund
Twitter's founder Jack Dorsey and Musician Jay Z are setting up a donation fund with 500 Bitcoins worth $ 23 million to support Bitcoin work in Africa and India. Dorsey donated $ 1 million this week to an institution that educates regulators about Cryptocurrencies.

One of the election promises of Andrew Yang, presidential candidate in New York, the world's financial center, was to make New York the center of cryptocurrencies. According to the Fontas Advisors and Core Decision Analytics poll, Yang is likely to get the majority of the votes and be elected president.

Bitcoin is trading at $ 46,975 this morning, with sales of 3.5%. The US and Chinese markets are on holiday today. On the other hand, sales to the general market seem to be voluminous. As we shared before, we thought that the market would correct in a healthy way without the Tesla news. In order for the markets to see new records, they need to make a healthy correction. Currently, support for the uptrend, which started at $ 29,140, ​​is past $ 43,600. With the bulky incoming sales, Bitcoin's transaction volume broke the record for all time.

When we consider BTC / USD technically; momentum and MACD give negative mismatch in the 4 hour period. Major support points are the $ 43,600 and $ 41,900 levels. The MACD has not yet ended the negative mismatch and continues its intersection and volume in the sell zone. Technically speaking, the image is poor for now. Therefore, although the short-term buy-sell strategy continues from the $ 46,500 level, the hold on the main supports of $ 43,600 and $ 41,800 in the withdrawals. 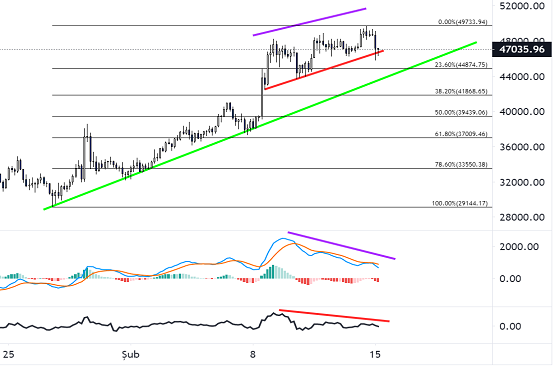 Ethereum is trading with some sellers in the new week. While trading with 3.3% sellers at $ 1470 this morning, there is a significant distortion on the fundamental side. Development continues in the number of active and new addresses. There is no significant deterioration in basic developments. For this reason, these retractions experienced by the market are called a correction. On the other hand, while mining fees tried to normalize, higher fees were giving correction signals for coins using the ETH and Ethereum network.

When we consider ETH / USD technically, the wedge formation we mentioned last week continues. In addition to the price mismatch with the MACD, the wedge formation also indicates that the correction may continue. The MACD has given a sell signal. On the other hand, although ETH tries to hold on, this technical weak image that comes with the support of the middle band is contradictory. Therefore, we interpret the market movements as short-term buy-sell until the mismatch between MACD and price is broken. 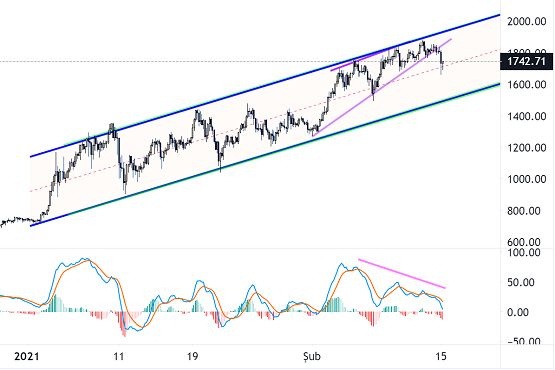 When the AVAX / USD parity is analyzed on the hourly chart, it is seen that there are price losses in the declining channel it has created since February 11. Problems and stuck transactions in the Avalanche network may have slightly broken the AVAX directional trust. On the other hand, the rapid increase in the transaction volume in the stock exchanges caused problems on both the trading platforms and the Avalanche platform. Although such negative situations slow down the rise in the short term and cause withdrawals, the rapid increase in the circulating supply of AVAX and the number of investors in the long term has made AVAX attractive for HODL users. For this reason, expectations for the medium-long term are still strong.

When the AVAX / USD parity is analyzed technically, it is seen that price candles moving within the boundaries of the descending channel are in a downward direction due to profit sales following AVAX's record of $ 60.00. The 45% retracement after the record dropped prices down to $ 33.20. This level, which is the lower channel of the channel, becomes the support level for prices and the reactions from there may raise the $ 43.00 resistance above both the channel upper band and the Fibo $ 38.20 retracement level. Exceeding this level may increase the upward momentum for prices that are free from selling pressure on bearish channel boundaries. 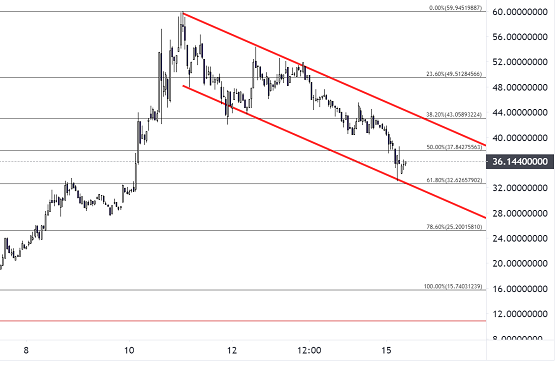 Ripple is pricing this morning with a 7.8% retracement at $ 0.5460. Jeremy Hogan, one of the prominent US lawyers, evaluated the case between the SEC and Ripple in a video and stated that a settlement could be reached soon. When Gensler's appointment was approved as the new chairman of the SEC, he announced that he would not want to lose Ripple to other countries such as Japan as a crypto expert. This is supportive for those who think that XRP will not suffer serious damage even if sanctions are imposed. On the other hand, Ripple's former co-founder Jed McCaleb sold 28 million XRPs on February 14, and when looking at wallet orders, orders are entered to sell 38 million XRPs every day this week. This means that 268 million XRP will be sold by McCaleb 1 week before the case between SEC and Ripple. For XRP, which has a 24-hour volume of more than $ 6 billion, these figures do not have the volume to directly affect prices, but psychologically it can affect XRP investors.

When the XRP / USD parity is analyzed technically, it is seen that the prices is on the bullish channel, but the upward performance has weakened due to the withdrawal of the general market. Still, it has not gone below $ 0.5000 and has the potential to react with support from this level. As long as prices hold on to the uptrend, $ 0.5800 will be the first resistance, but pricing below the $ 0.5000 level that should be followed may again bring retreats to around $ 0.4100. The transaction volume with vendors seems to be higher over the past few days. The MACD indicator is rising below zero in the negative zone. There is a negative outlook on the indicators side. 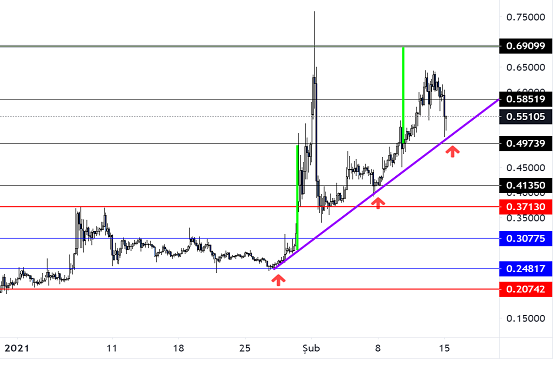 Litecoin is experiencing a 6% retracement in the morning due to the general situation and is priced at $ 201. After Bitcoin's record at $ 49,000, Litecoin, which is known as Bitcoin's brother coin, has also recorded a new record at $ 230. It is seen that the changes until Friday, when Grayscale's weekly purchases are closed, are received close to 230 thousand LTC on a monthly basis. This shows that the demand for LTC is still hot. On the other hand, the expected 50 thousand record on the BTC side and the subsequent price increases keep the upward expectations for Litecoin, one of the crypto currencies with the highest correlation with BTC.

When the LTC / USD parity is considered technically, it is seen that the Shoulder - Head - Shoulder formation, which is a return formation, has been formed. The downside break of the $ 210 neckline accelerated the decline as selling pressures increased, and the 4-hour candlestick close reached the formation target of $ 210, which also coincides with the bullish trend. The bullish reactions above this level may revive the $ 210 resistance for prices and then the $ 220 pricing, but with the stability on the uptrend, Bitcoin pricing should be followed. 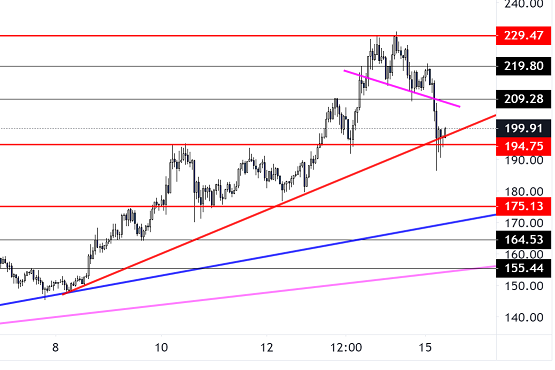 LINK is pricing at $ 31.90 this morning with a 4% price drop. Looking at the on chain data, it can be seen that the network activity has steadily increased 10 times in the last two years. The LINK / USD pair traded at $ 35.50 on February 14, refreshing the all-time record. This rise can be attributed to the rapid growth of activity in the network for LINK, which has been consolidating for a while. Data on the network show that a total of 414 blockchain projects are using Chainlink technology. This means an increase of 31.4% in the last three months for Chainlink blockchain projects.

When the LINK / USD parity is examined technically, it is seen that the reaction from the support level with the $ 27.00 channel lower band is pricing at $ 30.00 and above. Then a record pricing of $ 35.50, which is the channel upper band, was achieved. Profit realizations from bitcoin and altcoins also had an impact on LINK side and started to price down by around 10% after the record. Prices at $ 31.80 may support the continuation of the uptrend by breaking the channel mid-band at $ 32.00, with the market recovering. The hourly chart shows the closing prices of price candles above the opening prices and Stochastic is giving a positive signal. The Williams% R oscillator is above the support level. 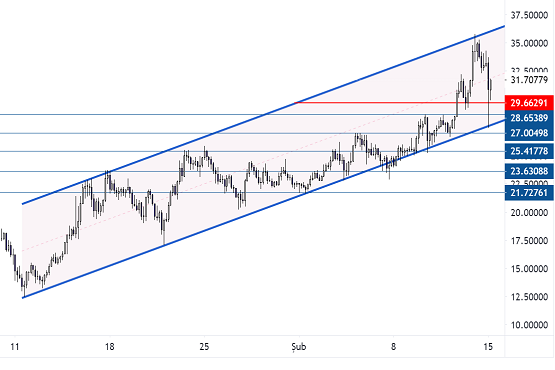 BAT / USD, which has reached a parabolic trend after the movements it has made since the beginning of 2021, made a correction movement for the first time since the beginning of the year. The price, which declined to the level of $ 0.4725 and held at this point, reacted after it touched the trend here. BAT / USD reactions, which are still in an upward trend, are located at $ 0.53. It has a more positive outlook compared to other parities. 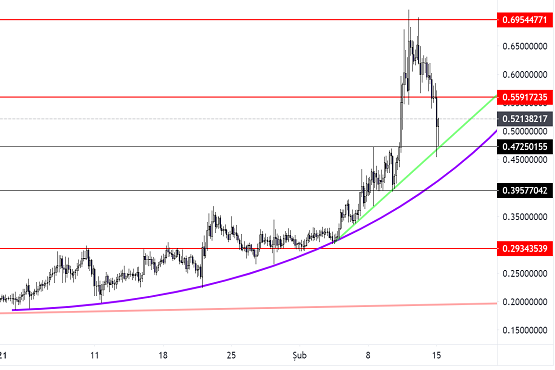