Currently in beta, the Enjin 2.0 wallet version is scheduled for release in the second quarter of 2022. However, there will be support for DeFi trading, stake awards, cross-chain bidding, the Polkadot and Kusama ecosystem, and more.

Pietro Fittipaldi explains this decision process as follows: “My brother and I won the first F1 virtual world championship, so it made perfect sense to be able to do something else digitally through NFTs.” Fittipaldi announced that the NFTs would be designed by Brazilian artist Rich, who is famous for his graffiti work.

Meta Searches in the Metaverse

According to the report shared by ExpertClick, Meta shared that it has applied for eight new trademarks in order to move new products such as Facebook and crypto trade to the metaverse. This report also revealed Meta's expansion strategy in the metaverse.

At the Barcelona Avalanche Summit, the product head of Ava Labs applauded two initiatives aimed at simplifying the user experience and bringing more presence to the Avalanche ecosystem. One of them will be its own core wallet and the other will be its Bitcoin bridging function.

Deputy Minister of Malaysia: "Bitcoin Will Not Be a Legal Tender."

Despite rumours in March, the Deputy Finance Minister of Malaysia said he did not plan to accept Bitcoin or other cryptocurrencies as a legal tender. Instead, the nation will focus on issuing central bank digital currency

Bitcoin gained a 0,12% value during morning hours and is priced around $44.054. When we consider the BTC/USDT pair technically, there is no major change in the outlook. BTC retreated to the 50MA level (40.656) and it climbed up, finding support. The downward trend in RSI in BTC, which broke the level of minor resistance at the level of 43.500 dollars yesterday, also broke upwards as of yesterday. In order for the rise to the level of 52,000 dollars to continue, the 44,000-46,000 dollars band must be broken upwards. 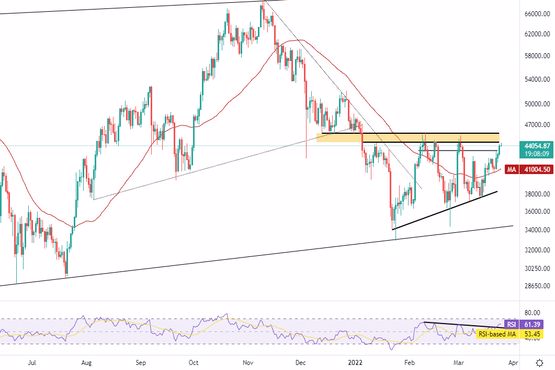 Ethereum gained a 1,00% value during morning hours and is priced around $3141. When we consider ETH/USDT pair technically, ETH broke the minor short-term trend as of November 30, 2021, catching the uptrend. It reached the local peak level on March 2. This rise, which we expect to continue towards the level of $3300, is also in the zone of 3200-3300 dollars, the next major resistance zone of the trend. 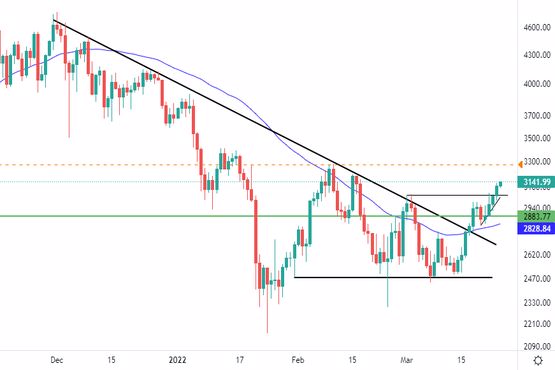 AVAX lost a 0,80% value during morning hours and is priced around $86.80. When we consider AVAX/USDT pair technically, the horizontal trend continues above the downtrend. AVAX had a stagnated price movement as of January but broke the zone upwards. When sell-offs decreased, the acceleration above $95 became effective. Breaking the downtrend upwards, AVAX has retested this trend and turned it into a new support. If it does not lose the momentum, rise towards $100, the resistance zone marked in blue might follow. 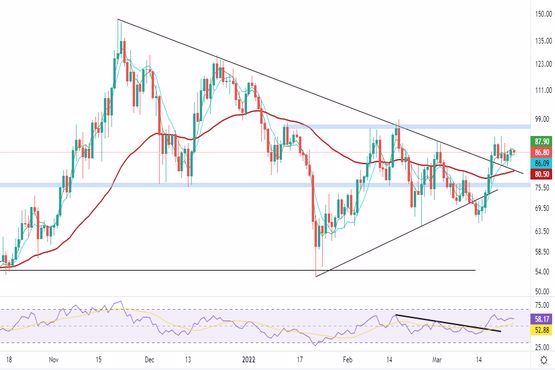 Ripple gained a 0,07% value during morning hours and is priced around $0,8412. When we consider XRP/USDT pair technically, there is no major change in the outlook. In XRP, which broke its downward trend with positive news flows, the sideways trend has been in progress for the last few days. In XRP, which was priced just below the $0.8579 level yesterday, the level was tested several times, but permanence could not be achieved. With the upward movement in the daily chart, we expect momentum to be gained and a rise towards$0 .92, which was the previous local peak. 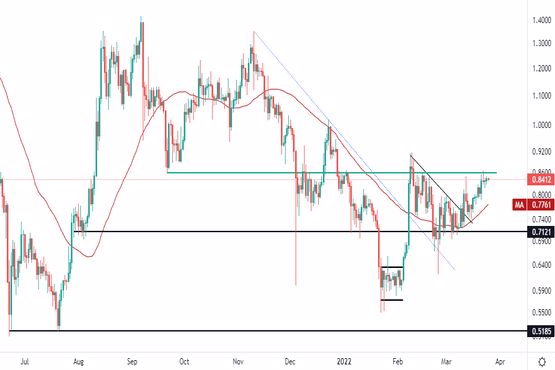 LTC gained a 0,50% value during morning hours and is priced around $127.1. When we consider the LTC/USDT pair technically, there is a minor uptrend formation in LTC, which broke its long-standing downtrend last week and made the weekly closing above this level, as of March 14. As we mentioned in the daily newsletter this week, LTC, which has a daily close above $121, has achieved a permanence above this level and we expect the rise towards our next price target, $130, to continue. 117-121 dollar band first level of support if rising trend is lost. 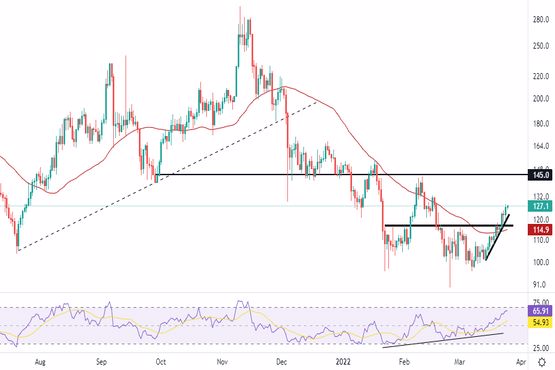 LINK lost a 0,12% value during morning hours and is priced around $16.13. When we consider LINK/USDT pair technically, there is no major change and the positive outlook sustains. LINK has price action inside the horizontal channel as of May 26. It resolved from the stagnated price movement dominates over LINK on February and broke the target marked in red upwards. Rises to $18 can be seen for LINK. 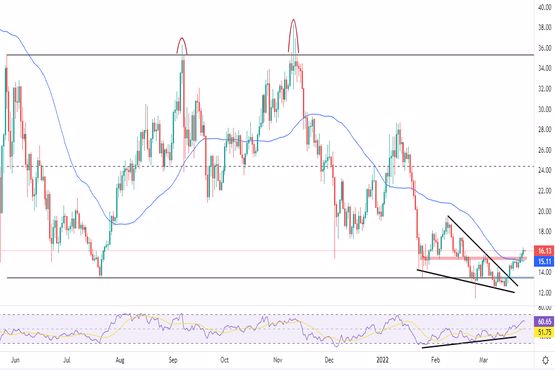 BAT gained a 0,42% value during morning hours and is priced around $0.8617. When we consider BAT/USDT pair technically, there is no major change and the horizontal outlook sustains. We see that momentum is gained with the break of the downtrend and a weekly close is realized above the level of 0.7694 dollars, which corresponds to the 50MA level. For BAT, which we expect to gain momentum again with the market-wide increase, our next first price target is $0.9246 (the 200MA level). 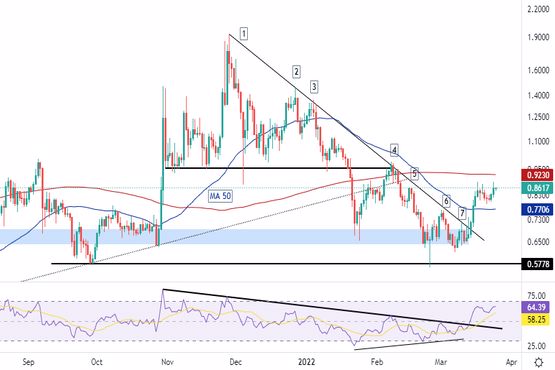