US SEC Could Gain Authority Over Stablecoins

A forthcoming report from the U.S. Treasury and other regulators could give the SEC new authority over stablecoins. Under the continuing regulations, stablecoins could face some of the same rules that bank deposits currently face. The SEC has suggested that stablecoins carry risks despite their goal of maintaining a price peg.

Payment giant Mastercard has formed a partnership to allow its partners and merchants in the United States to provide cryptocurrency solutions, including buying, selling, and holding cryptocurrencies.

The Public Pension Fund Plans to Invest in Bitcoin-related Products

Stephen Squeri, American Express CEO, said during his appearance at Yahoo Finance that he considers crypto to be a gold-like asset class.

CryptoQuant, on-chain data indicated that sales from short-term holders may be the driving force behind the recent correction.

In its latest application to the Securities and Exchange Commission, Tesla, the largest manufacturer of electric vehicles, stated that they do not sell Bitcoins and may start accepting them again for payments.

When we consider the BTC/USDT pair technically, Bitcoin, which has continued its price movement within the existing ascending channel as of July 20, experienced a pullback along with the sell signal that came when DEMA-7 cut the DEMA-14 downward after the reaction from the channel's upper band. There is a slight recovery in BTC, which found support at the level of $60.236, which corresponds to the Fibo '78.60 tranche. We see a sell signal coming from MACD in the daily chart. If the DEMAs recover and give a buy signal, Bitcoin may rise again. 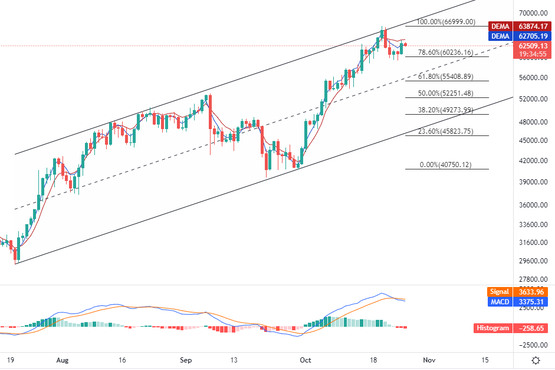 Ethereum lost a 0,30% value during morning hours, and the current price is $4208. Recent price movements in the crypto market shows that ETH has outperformed Bitcoin in the last 1-week period and has gained about 14 percent compared to Bitcoin.

When we consider the ETH/USDT pair technically, ETH, had had a trading volume below the average over the weekend, gained a 3% value yesterday, and closed the day, reaching a new peak level. As of October 11, our price target of 4600 dollars, which is the head-and-shoulders formation target, remains valid unless this trend is lost in the ETH direction, which continues to move above the existing uptrend as of October 11. 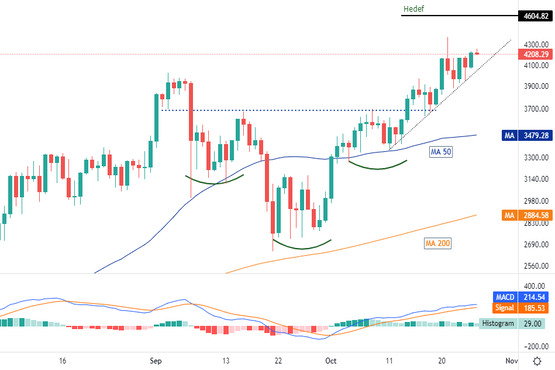 AVAX gained a 1,20% value during morning hours, and the current price is $70,57. When we consider the AVAX/USDT pair technically, AVAX, which has been continuing its price movement within the ascending channel since August 18, recently broke its 50-MA upwards and held onto it in the daily chart. It also accelerated along with the DEMA intersection on 19 October. In the daily chart, MACD gives a buy signal. As we mentioned before, the next technical target for AVAX is $87 (the mid-channel band). 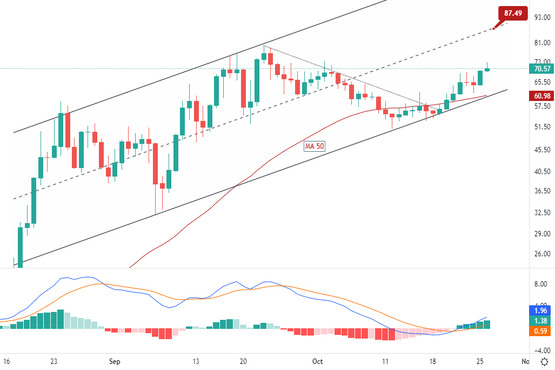 Ripple gained a 1,95% value during morning hours, and the current price is $1,1102. When we consider the XRP/USDT pair technically, XRP, which continues to move below the current downward trend as of October 10, is holding on to its 50-MA. Yesterday, XRP had slight rises, but the technical outlook is still the same. Looking at the daily metrics, we see that a sell signal from MACD continues. XRP, which tested the downtrend this morning, faced resistance from the same level four times. It can break its downward trend as long as the daily close does not occur below the 50-MA. 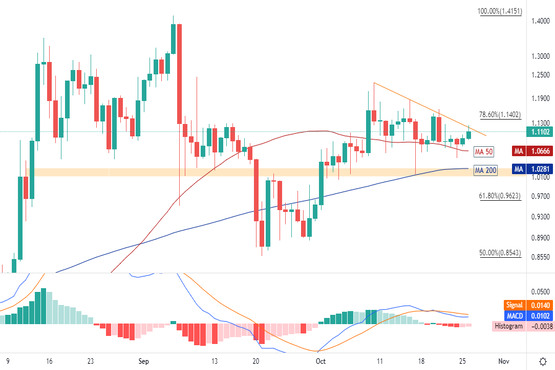 LTC gained a 0,95% value during morning hours, and the current price is $196,5. When we consider the LTC/USDT pair technically, it is holding on to $188, which is equivalent to the 200-day moving average as of October 21. LTC has a sideways trend and a stagnated price movement between $195,7 and 200-MA, which is equivalent to Fibo'78,60. A break will determine the trend. Although the MACD proceeds to give a buy signal in the daily chart, an intersection is about to occur in the direction of a sell signal. Our bullish expectation for LTC remains valid as long as persistence over the 200-day moving average is maintained. 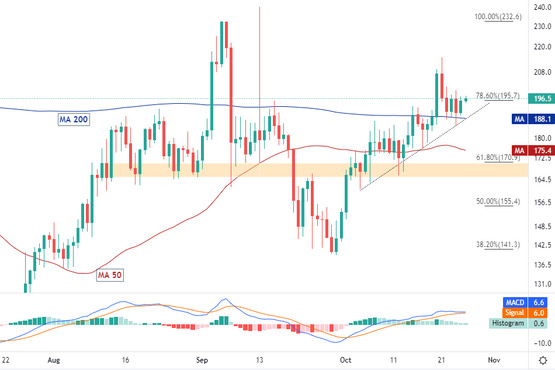 LINK lost a 1,50% value during morning hours, and the current price is $31,93. When we consider the LINK/USDT pair technically, LINK retreated to the $29,34 (Fibo'78,60) on Monday and found support that triggered a rise bringing more than 9 percent income. LINK moves above the 50- and 200-day moving averages, and MACD gives a buy signal strongly. In our opinion, LINK will resolve sales pressure, and the rise can continue in the medium term. 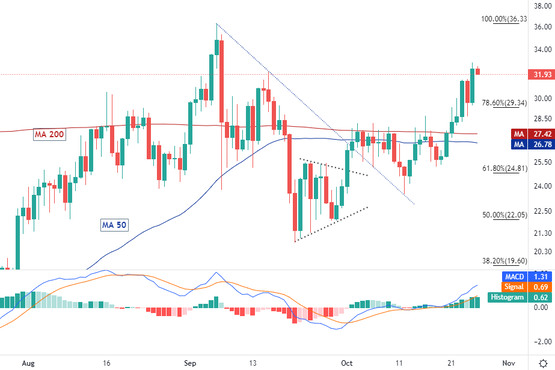 BAT lost a 0,35% value during morning hours, and the current price is $0,7018. When we consider the BAT/USDT pair technically, there isn't any different outlook. Showing a sideways trend for a long time, BAT faced resistance of $0,7099 (50-MA) this morning. As long as it holds above the ascending minor trend that exists as of October 12 in the daily chart, we do not expect a downward movement for the BAT; hard rises will come with the upward break of the downward trend and the 50-MA. 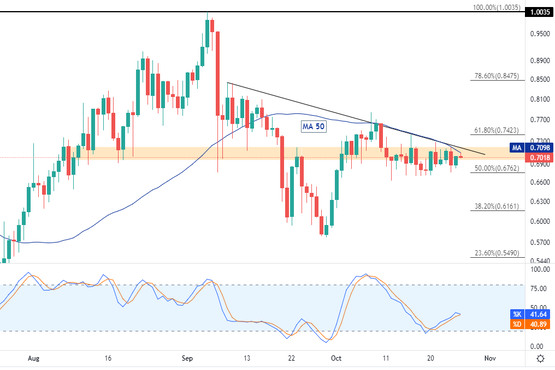