Meta is preparing to launch a feature that will allow users to view NFTs on several networks within the Instagram platform, including Ethereum and Polygon, according to a report that has not yet been officially verified. The support announcement is expected Monday.

Tron DAO purchased 504,600,250 TRX for $38,993 million as part of its USDD stablecoin reserves. USDD stablecoin's current supply doubled to over $200 million in less than 48 hours. On the chain, Tron currently performs more than 4.7 million transactions in a single day.

Mothers are investing in the cryptocurrency space to educate themselves digitally, according to a report published by NBC News. Most of the mother investors interviewed claimed to be interested in cryptocurrencies as a way to meaningfully change their families' financial security.

Google's Cloud unit is building a team to build services for developers running blockchain applications as the company tries to leverage the growing popularity of cryptocurrencies and related projects.

Tron recently followed in the Terra Foundation's footsteps and announced the launch of its decentralized stablecoin, the USDD. At the same time, the team said, they would create a $10 billion reserve for stablecoin, which is expected to increase by $1 billion this month from venture capitalists and institutional investors.

TVL in DeFi Protocols 17% Lower Over the Last 30 Days!

On Saturday, Terra lost its peg for a short time after someone dumped $300 million worth of UST tokens. DeFi expert Route 2 Fi believes the stabilizer will be restored, as there is “enough money” in the system to back it up. Terra's co-founder, Do Kwon, dismissed these concerns on Twitter, claiming he “loves chaos.”

Bitcoin lost a 1,20% value during morning hours and is priced around $33.669.When we consider the BTC/USDT pair technically, BTC has lost the uptrend that has existed since December 2020 and broke it downwards again. Although the negative signals in the daily metrics maintain, we see that there is a reversal signal in the short-term 4-hour chart. As we mentioned in the daily newsletter last Friday, a positive divergence was confirmed in the 4-hour RSI in BTC, where we saw that the downward movement continued at the weekend. The first level of resistance in BTC/USDT, which is likely to rise in the short term when starting the new week, is $35,700. 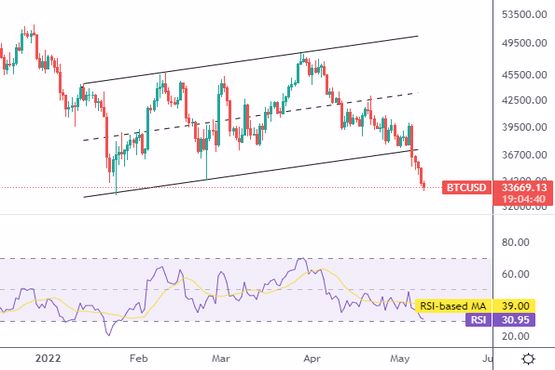 Ethereum lost a 2,40% value during morning hours and is priced around $2462. When we consider the ETH/USDT parity technically, the price movement continues within the descending channel that existed as of December 2021. ETH found support at $2480 - 2515 (the lower line) and confirmed the positive divergence on the 4-hour chart yesterday at 11 PM. However, the first resistance level to be followed for ETH/USDT, which we expect to experience a short-term rise, is the level of $2640 (channel middle band). If the support zone marked in yellow on the graph is lost downwards, we cannot talk about the short-term positive outlook. 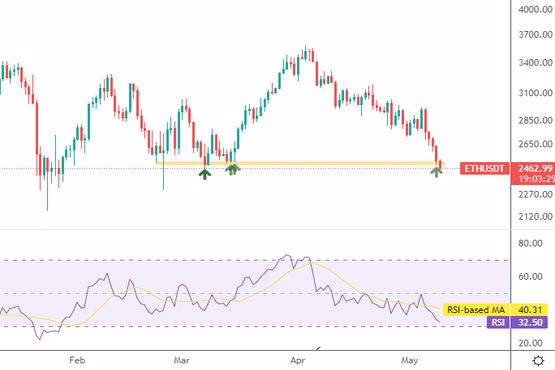 AVAX lost a 0,90% value during morning hours and is priced around $51.11. When we consider the AVAX/USDT parity technically, although it performs a price movement below the strong support zone marked in yellow on the graph, there might occur a positive divergence in RSI on the daily chart. If the daily close occurs positively today or tomorrow, AVAX can receive strong support from this zone alongside the positive divergence. 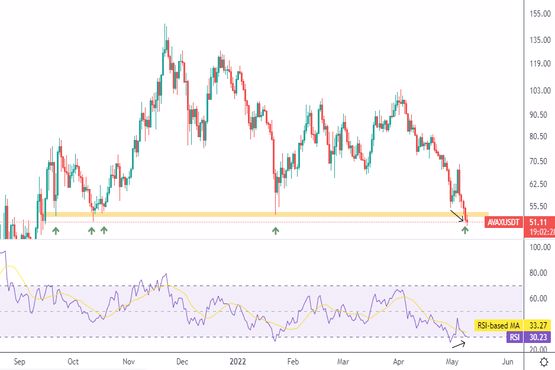 Ripple gained a 0,10% value during morning hours and is priced around $0.566. When we consider the XRP/USDT pair technically, it appears to have plunged to the strong support level (existed as of June 2021) marked in yellow on the graph. There is no reversal signal yet, but a recovery follows the 4-hour metrics. And they trigger a short-term rise when touching the oversold zone. If it doesn't break the support level at $0,523- 0,557 downwards on the daily chart, then it's an appropriate level for new costs. 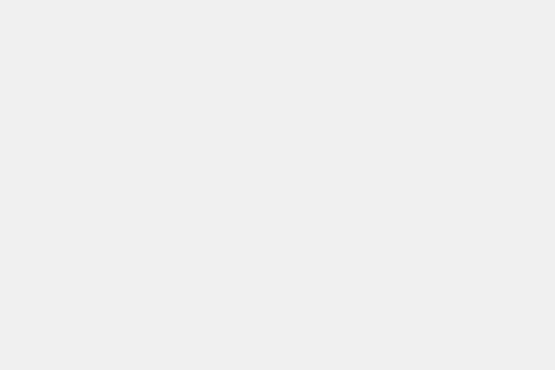 LTC lost a 2,24% value during morning hours and is priced around $92. When we consider the LTC/USDT pair technically, LTC plunged to $94.4, the vital support level. And there's positive divergency in RSI on the daily chart. In parallel with the similar outlook across the market, we expect a short-term rise. In LTC/USDT, if the divergence works and there occurs a short-term rise, the first resistance level to be followed is read as $99. 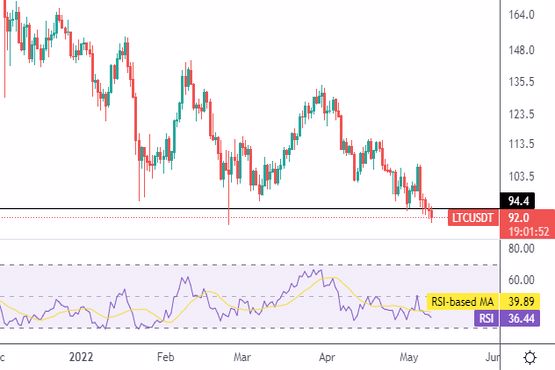 LINK lost a 1,90% value during morning hours and is priced around $9.83. When we consider the LINK/USDT pair technically, this horizontal channel (which exists for about 1 year) has recently been lost downwards in the parity. When we check the daily and short-term metrics for LINK, which we see as the drop continues to accelerate with this breakout, it does not receive any reversal signals. Negatively diverging across the market, LINK may continue to decline to its next strong support level of $8.50. 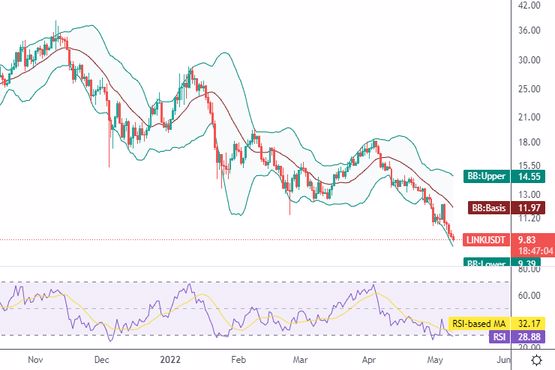 BAT lost a 3,50% value during morning hours, and is priced around $0.5290. When we consider the BAT/USDT pair technically, we see that the momentum continues its downward direction in BAT/USDT, which lost its support as of September 29, last week. Even if there is a recovery in short-term metrics, the parity has not yet received any reversal signals. Therefore, the drop might continue until the next major level of support, which is $0.45. 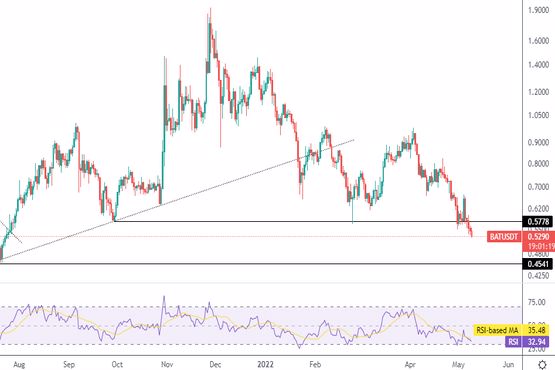