Nigeria Will not Prevent the Investors from Investing in Cryptocurrencies

XRP Is Requested to Be Relisted on Exchanges

At the hearing between the SEC and Ripple, one of the SEC lawyers by saying "only Ripple's XRP sales can be considered as securities” has stated indirectly that there is no legal obstacle left for XRPs and their investors trading on the exchanges. After this statement the hashtag #RelistXRP became a trend in social media.

In the case between Ripple and SEC, the strong defense sent to the SEC on March 20 by Ripple drew attention. According to Ripple's defense, many areas where XRP is used have been documented and proven to have real use. This situation was interpreted positively for investors.

Brave's BAT token, unique to the Ethereum network, is now available in Smart Chain. Thus, users can now use the Basic Attention Token on DeFi platforms such as PancakeSwap. With this development both the transfer costs will decrease and the user range of BAT will be expanded.

The Securities and Exchange Commission of Brazil has approved QR Capital's ETF application and made the fund Latin America's first ETF. Thus, Brazil became the second country after Canada to give Bitcoin ETF approval.

Another Important Transfer from Ripple
After the case between Ripple and SEC, Ripple has announced that it is not considered as a security on the Asian side and they can move the company headquarters to Asia if necessary. According to the latest statements, it has been reported that Uber's former CBO has been hired to be appointed to Ripple's Singapore headquarters.

Deutsche Bank analyst and economist Marion Laboure stated that Bitcoin, whose market value has exceeded $1 trillion, can no longer be ignored. The analyst also added that it is understood by Central Banks and governments that the cryptocurrency presence will be permanent.

Harris Survey Shows That One in Ten Americans Will Buy BTC

A new survey by Harris Survey has been published following the survey conducted by Mizuho Securities. According to the survey, 1 in 10 US citizens benefiting from $380 billion in direct incentives will invest in Bitcoin and other cryptocurrencies.

Pakistan's Khyber Pakhtunkhwa state is planning to build two pilot hydroelectric mining facilities. It was stated that with the mining facility, which will be controlled by the state, Pakistan is aimed to be the center of cryptocurrency.

The Presidency of Turkish Republic of Turkey Digital Transformation Office has added cryptocurrency definitions to its cryptocurrency terms dictionary that it has previously launched. The "Blockchain Dictionary" information series included topics such as crypto wallet, cryptocurrency and mining.

Bitcoin is trading at $57,700 this morning, with a slight horizontal change. Although there was no major underlying reason for the decline over the weekend, the world's second Bitcoin ETF was approved in Brazil after the first ETF approved in Canada on Friday. In the USA, Skybridge applied after VanEck and is pending. In this sense, the USA's approval of the ETF can relieve many companies in terms of legal legislation. It can speed up purchases of new or additional Bitcoin. Just like adding BTC to Xbox payment methods. The amount of BTC from exchanges also continued to increase over the weekend. Since we cannot see a negative picture that affects BTC fundamentally, we find the resulting price levels basically discounted.

When BTC/USD is technically analyzed, the levels we find fundamentally discounted are 55 thousand band and BTC prices continue to recover within the accumulation. Although it is out of the rising channel, it has been tested by 55 thousand and subsequently 60 thousand many times. In this direction, the $58,200 and $59,150 levels will be intermediate resistances. On the continuation of the rising, there is a resistance zone in the $60-61,000 range. 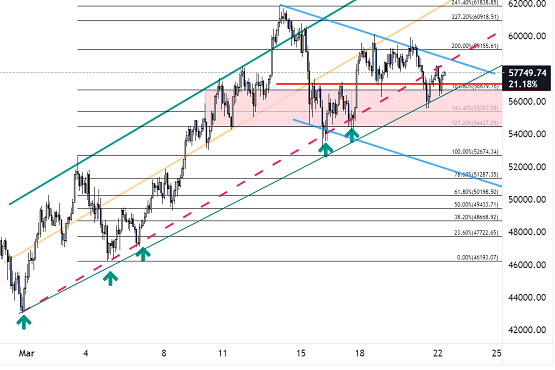 Ethereum is trading at $1,790 levels this morning in a horizontal band parallel to the market. Things are not going well in the Ethereum-BTC scissors ETH. We think that the main reason for this is the weight of Ethereum miners' planned attack on the ERC20 network on April 1. This situation disrupting the outgoing course, causes ETH investors to wait. Buterin and his team stated that they are working against this attack; however, the possibility of the prices to ease before the attack passes is difficult. In addition, the amount of ETH held in stock exchanges is gradually decreasing. This confirms to us that we should wait for April 1 at the earliest for the ETH movement.

When the ETH/USD parity is technically analyzed, the squeeze continues in the range of the declining trend from the $2,040 level and the main support line at $1,715. The reaction from the supports formed in the zone near the $1,715 level is starting to weaken towards the 1,800 zone. Since this zone has not been overcome for now, our horizontal process band continues. 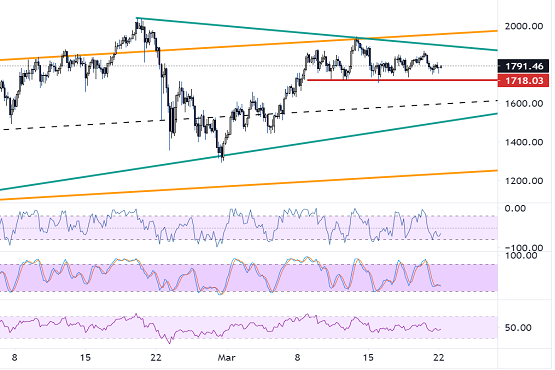 The AVAX/USD parity shows horizontal change in the morning and is hovering in the $32.80 zone. On March 9, one of AVAX's second quarter goals was to be backed by the world's largest wallets, and its partnership with MetaMask has reached 2 million users today. The participation of AVAX in an award-winning voting on PancakeSwap, which is also one of the DeFi platforms with the largest user network, indicates that its dominance in the market is supported. NFTs, increasingly popular and sometimes purchased at record prices, can be transferred at a very small cost using the AVAX wallet.

The AVAX/USD parity continues to rise within the boundaries of the rising channel it has created as of March. Breaking the $32.50 resistance and channel mid-band level brought about a 16% rise for AVAX. Even though the parity has returned to the $32.50 support zone afterwards, it continues its positive trend in the mid-upper zone of the bullish channel. Previously, the double bottom had set its target by exceeding the $32.50 level and brought the level of $45.00 to the agenda. Awaiting a possible opportunity for reaction, the parity continues its target. 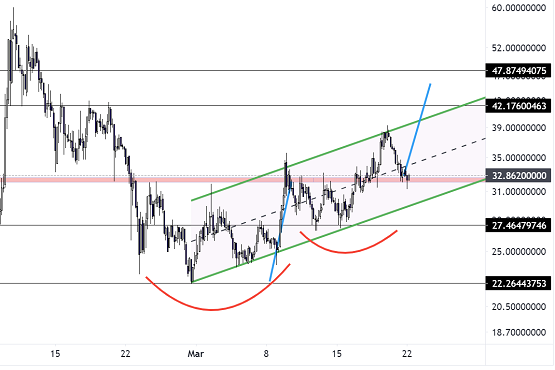 Although Ripple was trading at $0.51 with a horizontal change in the morning on the first day of the week, it changed by 19% in the two-day term we left behind, and the $0.55 level was tested. At the hearing between the SEC and Ripple, the XRP investors took a sigh of relief when SEC lawyers announced that XRP sales, which we scrutinized on the basis of securities, are only for Ripple sales and will not cause problems for investors. Later, the masses gathered on social media in order to relist XRP on the stock exchanges where it was issued, and this request became a trend. In the letter submitted by Ripple to the court, the details of some of the sales made by Ripple were explained and it was stated that the XRP sales made on behalf of the Ripple founders were made within the legal framework. After all these developments, an increase of nearly 20% was achieved. In the XRP/USD parity, where the developments are priced so much, positive pricing may create opportunities for investors as long as the positive developments in the litigation process are followed.

When the XRP/USD parity is technically analyzed, $0.49 was the upper limit of consolidation, the horizontality. The break of this level on March 20 and the continuation of the rise took the parity away from selling pressures. Subsequent support from the $0.49-0.50 zone created a small reaction and the parity is currently pricing at $0.51. Although the outlook for the created flag formation points to the $0.60 zone, persistence above $0.49 and high pricing above the $0.52 level should occur. 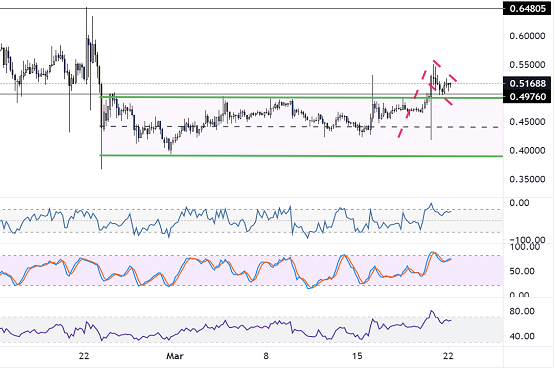 Litecoin is priced above the $195 level with a horizontal change in the morning hours. It has not yet turned to the positive side in weekly returns and is 3 points behind. Monthly returns are 17 points behind Bitcoin and it shows a 14% monthly drop on its own value. We think that LTC, which returns to the discount course at $160 according to its market value and adjusted value, remains cheap in these aspects.

The LTC/USD parity failed to hold above the $204 level in the Fibo'23.60 slice and returned to its sideways course to its $190 support zone and between them. Major and minor downtrend, including two in the parity, has been formed. With the minor downtrend staying above the $200 level and then breaking the $204 level, buyers may gain strength. The reaction zone is $190. Oscillators with bottom reversal signals confirming the $190 support. 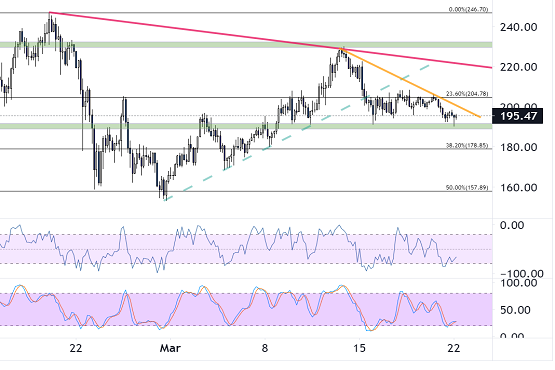 LINK, which tested the $30 level last week and increased its annual return to 1280%, has remained somewhat slow during this period and is maintaining its horizontal value in the $29.20 this morning. After Grayscale entered the fund, 5.5 thousand contracts were received, which increased to $30.5 on March 18; however, these purchases did not continue. Therefore, while the price has returned to the range of $28.00-29.00 from which it started, it has not yet recovered from its horizontal motion. While there is no significant exit or interest in the number of active and new addresses in LINK's chain data, the amount of LINK kept in exchanges continues to increase. These metrics tell us that LINK can stay a little more horizontal.

When the LINK/USD is technically analyzed, there is an image of recovery at the bottoms with the support found in the $28.70 zone below. Starting to hold above $28.90, which corresponds to the Fibo'50 support, LINK will be open to reactions as long as it stays in this zone. Therefore, in the triangle image, the upper resistance of the zone is outweighed by the resistance towards $31.50. 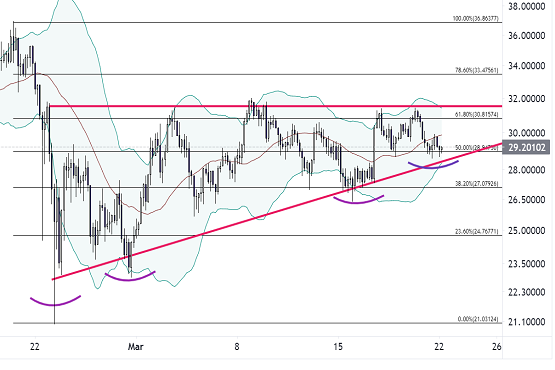 Basic Attention Token is listed this morning, up 1.4% from the $1.17 level. The increasing user number of the Brave browser and the fact that advertisers pay through BAT in line with BAT's purpose are accelerating both the demand for BAT in the stock exchanges and its development in the advertising industry. On the other hand, the fact that a copy of BAT, an Ethereum token, will be created on the Smart Chain and avoiding high transaction fees will ensure both the concentration of transfers and its participation in the DeFi market worth $44 billion.

When the BAT/USD parity is technically analyzed, the reaction of the parity over $0.75 on March 16 has been decisive in the amount of target increase for a new flag formation. The retracement after testing the $1.25 channel upper band led to the formation of the flag formation and a break of the $1.20 level will allow us to get a confirmation. Then, in line with the flag target, there may be an increase in the zone of $1.90. Key resistances to be followed on this course will be the levels of $1.22 - $1.30 and $1.40. 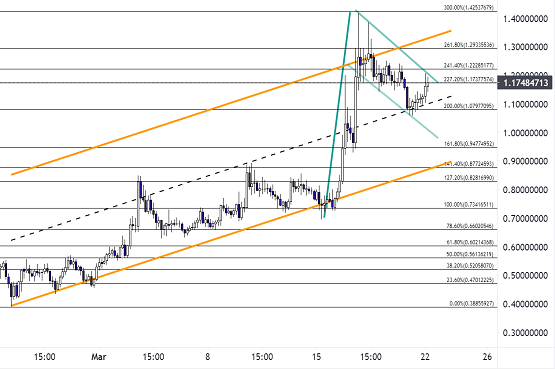