London-based tech firm Nivaura is working with Singapore's DBS Bank on a blockchain-based bond platform with the power to provide "one-click issuance".

According to data from blockchain analytics firm Chainalysis, India's share of the crypto market has increased to $40 billion in total, up from $200 million last year.

Pablo Urbiola, from BBVA's digital regulation team, said the European Central Bank should rely on public-private cooperation to issue a digital euro, while the possible issuance of a central bank digital currency (CBDC) should be carefully explored.

Unlike CBDCs, Greece's former finance minister does not consider Bitcoin to be a classic means of payment like a fiat currency.

Litigation from Cryptocurrency Exchanges to the Government in South Korea

Regulations in South Korea that would require cryptocurrency exchanges to have a real-name account at a local bank worry small exchanges, and exchanges are preparing to file a lawsuit against the law.

Morgan Stanley European Opportunity Fund, which invests in established and growing companies across Europe, owned 28,298 shares of Grayscale Bitcoin Trust (GBTC) as of April 30, according to a filing with the SEC on June 28.

ARK Invest, an investment firm led by Cathie Wood, has filed with the SEC for a Bitcoin ETF.

Fed Vice Chairman: We Should Say Yes to Stablecoins

Federal Reserve Deputy Chairman Randal Quarles said at a bankers conference in Utah on Monday that the United States must find ways to say "yes" to stablecoins.

Bitcoin, which rose 0.5 percent in the morning hours, is priced at $ 34,658. When we examine the chain data, there is a net outflow of $ 197 million on the BTC side and approximately 13 million entries on the Tether side. Although we interpret these data positively, Tether entry into the market will be very important to support the rise in the long term. On the other hand, we interpret Ark Invest's BTC ETF application and Morgan Stanley news, which has 28 thousand Grayscale Bitcoin Trust assets, in terms of the interest of institutional investors in Bitcoin.

When we consider the BTC/USDT parity technically, BTC, which managed to hold on to the weekly DEMA as of the morning hours, tried to break the descending trend that has been continuing since May 10 yesterday, but could not break the $ 35,300 levels upwards. An upside break of this downtrend will be important for confirmation of a sustained uptrend. Therefore, the $35,300-$35,400 band is an important resistance. On the other hand, the $33,957 levels, which coincide with the weekly DEMA levels, are important support levels. On the daily period, the MACD is signaling in the buy direction. 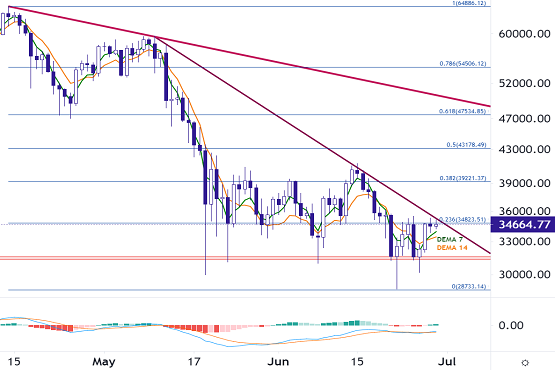 Ethereum, which has risen by 1.50 percent in the morning hours, is priced at $2115. According to the data received on June 25, last week in the CoinShares weekly report, there was an outflow of approximately $ 50 million from Ethereum funds last week, which was recorded as a record. We can say that the interest in Ethereum, which tested $ 1700 gold last week, has decreased with these data, which we especially follow the interest of institutional investors. When we examine the chain data, we see that there is a net outflow of 110 million dollars in Ethereum from the exchanges, and we interpret this positively. In addition, the 76% increase in the 24-hour change in the number of new addresses belonging to Ethereum in the morning indicates that investors have started to show interest in Ethereum again.

When we consider the ETH/USDT parity technically, we see that it is priced above the descending trend that has been continuing since mid-May as of the morning hours. It is very important for this downtrend to break up and sustain above the $2120 levels. At the same time, we see that the 7-day DEMA tends to cut the monthly DEMA upwards. If this crossover occurs, it can be considered as a buy signal. If the downtrend is not broken to the upside, $2079, $2039 and $2006 will be support levels, respectively. If the upward movement continues, the $2150-2160 band will be the resistance level. 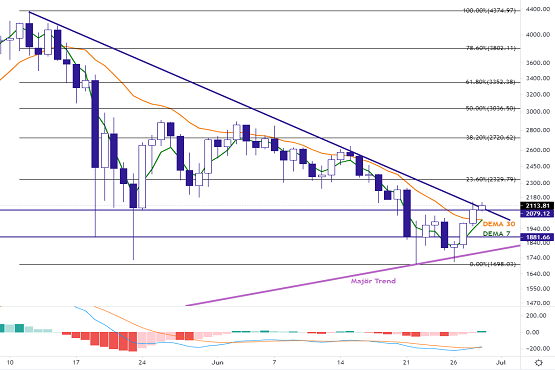 AVAX gained about 1 percent in the morning hours and is priced at $11.40. When analyzed in the daily period, AVAX, which has a downward trend as of May 19, is still priced below this trend. The next resistance area for AVAX, which has recently risen above $10.67 with the support it found at $9.80, which coincides with the Bollinger lower band, is at $11.80, which coincides with the descending trend. MACD is continuing the buy signal it gave long ago. The price, currently inside the resistance zone, will continue to rise towards the Fibo'50.00 and Bollinger middle band of $12.90 if the downtrend is broken. The outlook for AVAX is positive but located in the resistance zone. 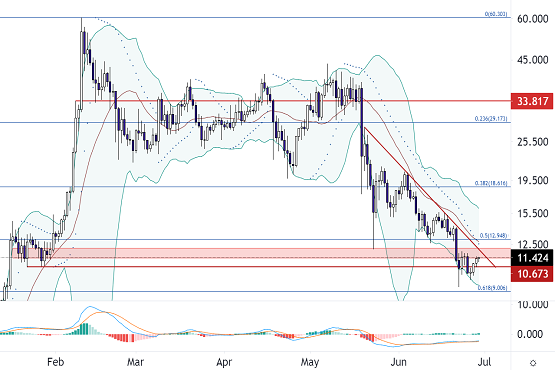 XRP, which has risen by 2 percent in the morning hours, is priced at $ 0,658. As of June 29, we see that the news flow in Ripple has slowed down considerably and there has been no positive or negative development. In the case, the development we expect is the letter to be submitted by Ripple on July 1, and as of today, it is possible to follow a movement in XRP with the general market.

When we look at the XRP/USDT parity technically, we see that as of the morning hours, the 7-day DEMA cuts the monthly DEMA upwards and creates a buy signal, but first of all, it is the upside break of the secondary descending trend that has been going on since May 18 for XRP, that is, 0.66. It is very important to maintain a permanence at the $0.67 level. If these levels cannot be broken and the price starts a downward movement, the $0.62-0.63 band will be the support level. The descending trend break can be followed for new purchases. 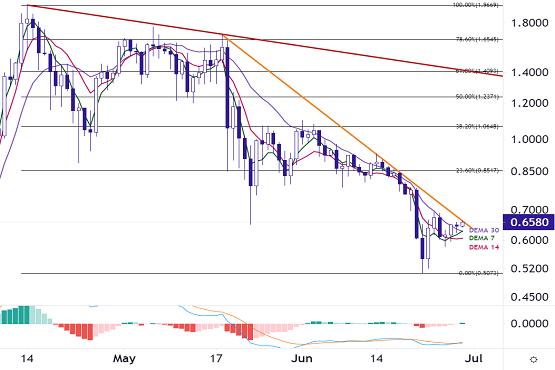 LTC, which rose 1.56 percent in the morning hours, is priced at $139. When the chain data is examined, there is an increase in the 7-day average of the number of active and new addresses in Litecoin. We interpret this as positive for LTC.

When we consider the LTC/USDT parity technically, we see that the downward trend that has been continuing since May 10 has been broken upwards as of yesterday. For Litecoin, which is priced at $139.82 just above the resistance at $139.13 as of the morning hours, if it persists above this resistance, it will move to $144.84, the correction level of Fibo'23.60, and the first resistance will be at these levels. We are waiting for you. After the weekly DEMA cut the monthly and bi-weekly DEMA upwards, we see that as of yesterday, the two-week average also cut the monthly average upwards and formed a buying signal. In the daily period, we can say that the MACD maintains its buy signal today. However, in case of a possible negative news flow and a decline in prices in the market, $133, $129 and $126 levels will be the support levels to follow, respectively. 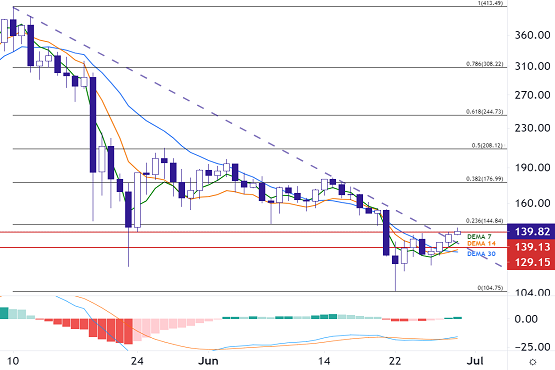 LINK is priced at $19.22, up 2 percent in the morning. When we examine the chain data for Chainlink, we can say that the increase in the number of active and new addresses and the interest of investors in LINK increased with the recovery in the market. We interpret this situation positively.

When we consider the LINK/USDT parity technically, we see that it is priced above the downward trend that has been going on since May 10. An upside break above these levels, as well as the $19.69 levels, which coincides with the Fibo'23.60 retracement level, will be critical. The upside break of the downtrend and its hold above the $19.20-19.25 band is very important to talk about a lasting bullish breakout. If we follow a pullback from these levels, the weekly DEMA ($17.46) levels will be an important support level. MACD and Parabolic SAR support LINK on the upside. 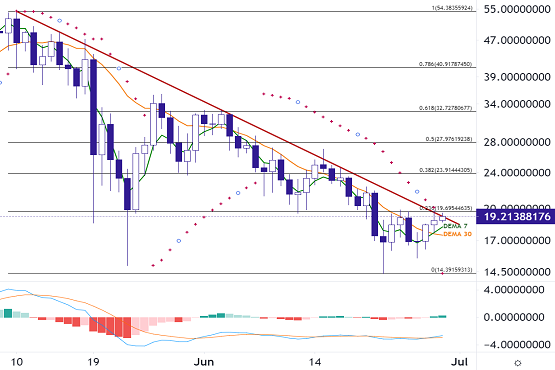 BAT is up about 3.8 percent this morning and is priced at $0.578. Testing the descending trend that has existed since May 27 in the daily period, BAT received a reaction from this resistance level. The reaction he saw was voluminous and limited. However, the buy signal from the MACD in the daily period continues and there is a positive divergence. The $0.584-0.596 band is an important resistance zone for BAT, which is located near the Bollinger middle band. With the upward breakout of this region, we think that the bullish movement for BAT will continue. If there are strong reactions from this region, there may be a pullback towards the $0.5395 levels. The outlook for BAT is positive. 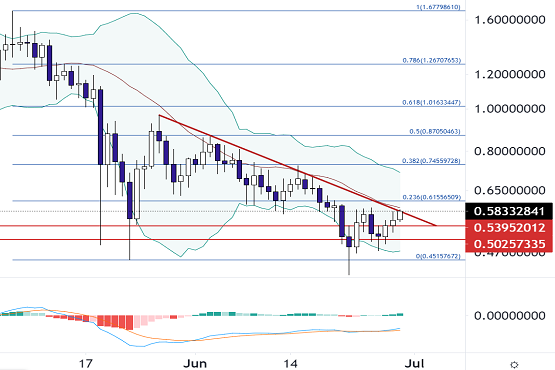