Finland-based technology company Nokia has announced that they are developing a platform on which companies can trade with data and artificial intelligence and the application will be blockchain-based. The company has emphasized the effective trade and the security blockchain will provide.

Galaxy Digital, a cryptocurrency-focused financial services company, has announced that it will purchase a new US-regulated crypto trading company for $1.2 billion in stocks and cash.

Georgia is already one of the leading countries in Bitcoin mining. Now it is on the way to being one of the countries researching potential independent digital currencies. According to its statements the Georgian Central Bank plans to create its own digital currency.

NYDIG, which provides enterprise Bitcoin solutions, announced its partnership with the leading FinTech company Fidelity National Information to provide Bitcoin services to many US banks in the following months. With this partnership, the customers will be able to buy, hold and store Bitcoins in their bank accounts.

Goldman Sachs has led the round of investment for industry data provider Coin Metrics. As well as Goldman Sachs’ adding Bitcoin to its return report last month, other big companies such as Castle Island Ventures, Highland Capital Partners, Fidelity Investments are also increasing their investments in Coin Metrics.

FinTech startup Tala is a US-based startup that provides loans in the form of microloans to more than 6 million customers in countries such as Mexico, Philippines, Kenya and India. Tala aims to use the USDC stablecoin to offer new financial instruments.

Ripple Appoints Former US Treasurer to Its Board

Serving under the Obama administration Rosa Gumataotao Rios has been appointed to the Ripple’s Executive Board. Appointed as an advocate of social change and women's rights, Rios will work to reconcile the private and public sectors.

Latin American e-commerce company MercadoLibre has announced on Wednesday that it has purchased $7.8 million worth of Bitcoin. The company said the purchase, which is part of its treasury strategy, took place in the previous quarter. The investment made by MercadoLibre is a powerful step towards popularizing Bitcoin as a payment option.

Bitcoin  is trading horizontally this morning in the $56,800 zone. The discount in Bitcoin, which tested the $58,000 level with the rapid exit it made yesterday, comes to the fore. The decline of the dominance of Bitcoin, which has almost zero return for the last month, has also been effective. However, with the ETH-BTC difference showing a 10 percent technical correction, BTC may want to close this gap. With the end of the decline in active and new address changes, we see that the chain data in BTC is moving again. On the other hand, NYDIG's partnership to provide Bitcoin services for banks will allow 300 million accounts to access Bitcoin next year.

When we consider BTC/USD technically, movements continue within the upward channel that has existed since the end of April. The momentum and the MACD continue to rise in the 4-hour and daily period, confirming the upward trend in the technique. In addition, if Bollinger, which is above the $56,600 level, can be supported, there may be a recovery zone of $56,200- $56,600 during the day and a move towards the $59,000 zone. There is some profit selling in the morning, but the trend is positive. 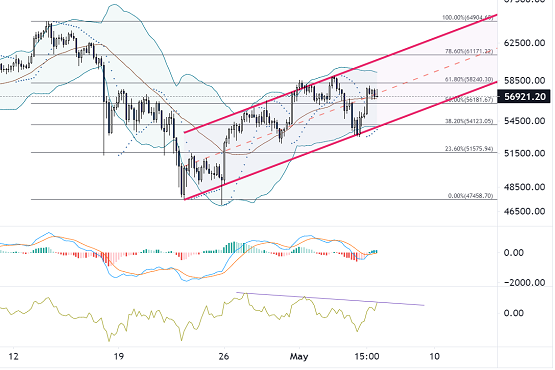 Ethereum  is trading at $3,420 this morning with a 3% retracement. In addition to ETH locked on the ETH 2.0 contract, the number of people who locked ETH reached an all-time high. We do not think that the expected London hard fork, Optimism and EIP 1559 improvement in the summer has yet been priced, nor that Ethereum has ended this trend. While maintaining our expectation of $6,000 within a year, low gas fees in Ethereum also support the network and tokens issued on the network.

When we consider the ETH/USD parity technically, pricing squeezed in the $3,500 zone continued to pressure up to the $3,370 level. Nevertheless, ETH, which does not even break its short-term trend, can make a profit of 5% of its premium against Bitcoin in case BTC moves (calculated from the ETH-BTC clipper) in the said period. Therefore, it may be a better strategy not to buy close to resistance. The $3,400 level is the middle band of the long-term channel at ETH. Holding on during the day will also be important in this respect. 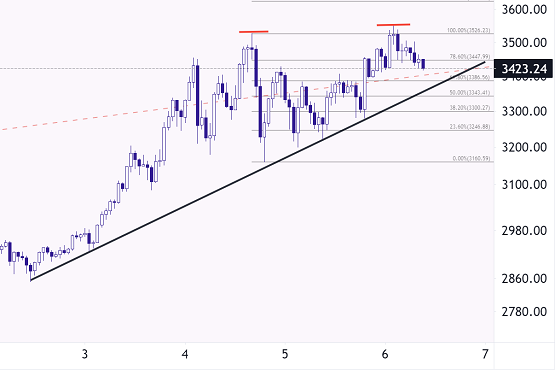 AVAX has risen 6% this morning and is priced in the $37.00 zone, becoming one of the most positively differentiated cryptocurrencies of the day. The reaction from the $30.00 major uptrend enabled the parity to increase its returns by 25%. With the previous local summit around $36.00, the parity acquired strong volume by taking the peak confirmation on the MACD and momentum side, and profit buying did not put pressure on pricing. While the $36.00 zone above the Fibo 78.60 zone is the area where the parity will seek support in pullbacks, the indicators that do not break the trend do not yet exhibit a declining momentum for the hourly chart. The $40.60 level appears as strong resistance as it was the previous high. 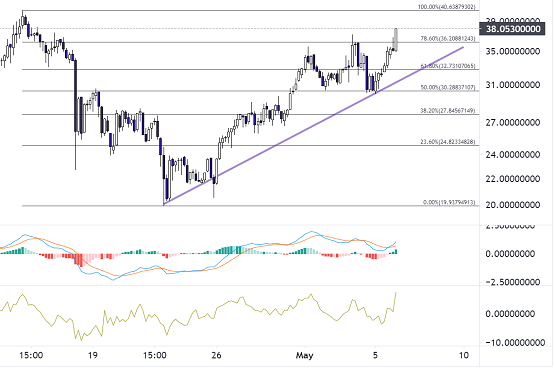 Ripple is up 5% this morning to $1.69, but is up 20% daily. As today is a day of significant developments regarding the XRP case, XRP investors have stepped up purchases in the direction of XRP in line with the expectations of a positive decision in favor of Ripple. Although the SEC administration is not expected to make a final decision as a result of the meeting to be held today, an important comment on behalf of the cryptocurrencies can lead to a positive decoupling of XRP from the general market.

Technically speaking, the XRP/USD parity rebounded quickly, moving the response at $1.41 to the next resistance level, the $1.54 Fibo'61.80 slice. Consolidated pricing above $1.54 sets the target of $1.80 with the flag formation. Although the parity is under some pressure from the $1.73 resistance, buying appetite may be re-triggered by bringing this level to support. The withdrawals will support the channel mid-band of $1.63, while price targets of $1.80 and above will be created for the rises. 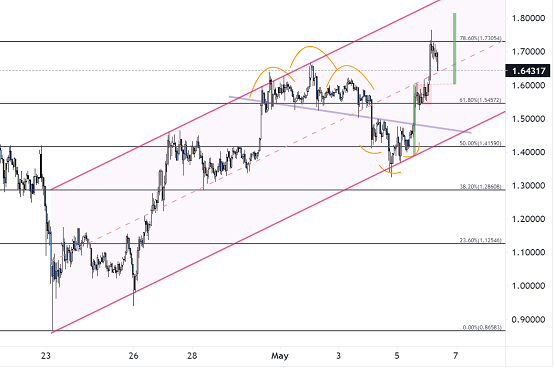 Litecoin is pricing around $333, with a 6% retracement this morning. Litecoin, one of the major units mobilized by the decline of BTC dominance to 46%, came to the fore in monthly returns by increasing its correlation with ETH compared to BTC. The standard deviation metric MVRV-Z score, which is calculated algorithmically with market value in Litecoin, reached the highest level in the last three years. However, Litecoin remains potentially far from the red sales zone.

Technically speaking, the LTC/USD parity rose 10% on the daily candle after breaking up the middle band of the $323 bullish channel ($330). LTC, which experienced a profit realization after the parabolic rise it recorded, may hold the mid-band of $330 in the morning, but it may loosen down to $300 unless there is a return from this zone. The trend continues, but it should be kept in mind that profit sales may occur with a break of $330. 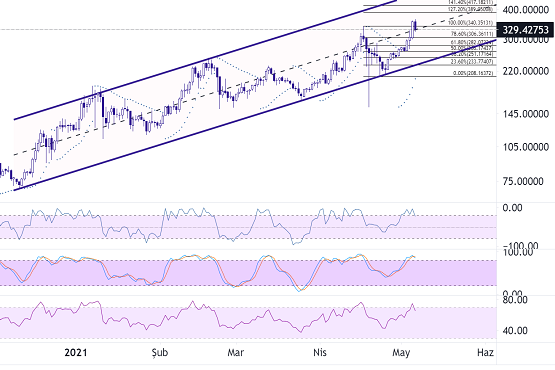 Chainlink is listed at around $47.00 with a 5% retracement this morning. With Ethereum dominance reaching 17% and launching Uniswap v3, DEX, which has the biggest market value of the mobilizing DeFi sector, LINK achieved a 35% return on monthly returns. When Chainlink reported its annual targets last month, it announced that they expected a rapid increase in the amount of locked LINK in DeFi.

If the LINK/USD parity is technically handled, the parity analyzed on the daily chart at $30.00 on April 24, which corresponds to the lower band of the channel, then started a long-term upward movement and carried its peak to the $51.00 zone. As it closes daily in the upper band of the channel, $49.00, it is exposed to profit purchases in the short term. While the previous local peak set the key support level at $44.00 for the parity, which was in the $44.00 zone, $41.00 could serve as support for the channel mid-band in the continuation of the retractions. In the short term, while this withdrawal move, confirmed by the indicators, supports the increase in healthy positions, we maintain our $60.00 expectations. 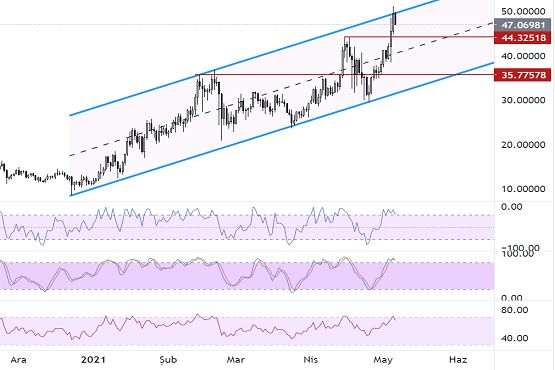 BAT is above the $1.39 level with a 2% price increase this morning. The parity improved its response from the $1.23 lower channel support to around $1.37, which is the mid-channel. This level is also consolidating with some sales, as it is the resistance level the parity has been pressured before. The MACD and momentum indicators have not left the uptrend, but the retracement of buying appetite confirms the parity's seeking support. In case of persistence above $1.37, rises extending to the $1.50 channel upper band may be experienced. Below $1.37, the initial support will be $1.35. The parity continues its positive course in the minor channel uptrend. 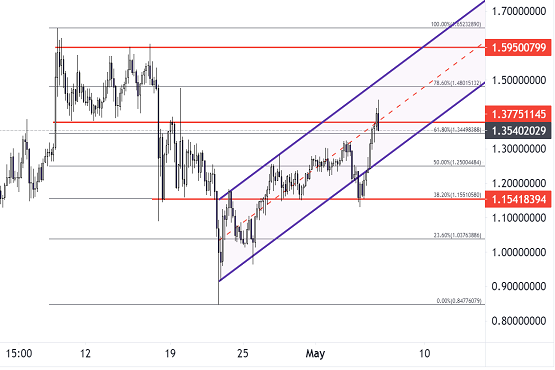