Norton announced that it is designing a new solution for potential cryptocurrency miners in order to also be able to mine Ethereum on everyday computers.

SEC Warns of Elon Musk Tweets
The SEC had ordered Elon Musk's tweets about Tesla to be approved by company lawyers, but Musk violated that order twice and failed. Despite the warning, Musk posted a tweet last night with a Bitcoin tag and a broken heart emoji.

Digital Wallet Study from the European Union
European Union (EU); it will launch a digital wallet study that allows citizens of any country to pay, access government-provided services, as well as store digital credentials.

Argo Blockchain Launches 166 BTC in May
Argo Blockchain, one of the miners who met with Elon Musk and Michael Saylor in recent weeks, announced last month that it had issued 166 Bitcoins, bringing its total to 1108.

The cryptocurrency market is trading at around 6.5 percent this morning. There is no specific reason for these strong sales in Asia, but it was very important that supportive news came in, for example, that google search engines would allow cryptocurrency searches from August 3rd. The market wobbled again yesterday over miner sales in 40,000 regions and Elon Musk's broken heart emoji tweet, but metrics continue to recover. On top of all this, the recovery in metrics is usually due to long position openings in derivatives markets, SOPR's re-exposure to the bull line by staying above 1, and the fact that it is technically challenging its 40,000 region.

When we consider BTC/USDT parity technically, although minor uptrends exist, the downward trends from 42 thousand, 59 thousand and 65 thousand levels continue. Yesterday, the reception signal continues as it began to cut the 7-day average 30-day DEMA average in the direction of al. While it has been stating for some time that volume and new money inflows are missing in the market, the formation of reverse pennant formation may begin in the possible bad scenario. The level he's going to have to convert to do is $34,000 to $35,000. 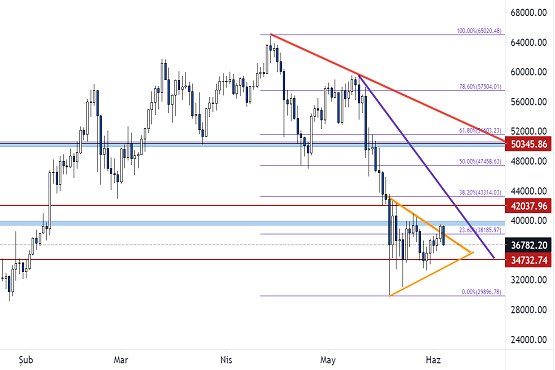 Ethereum is having a tough sell-off Asian session this morning with sales of close to 8 percent. The number of new addresses declined by 12 percent. ETH, which returned from $2900 yesterday, saw withdrawals of up to $2650 due to cumulative sales coming into the Asian session. The antivirus program Norton says that by starting Ethereum mining, it will also solve existing problems with the cloud system. The cryptocurrency market continues to grow, where corporate interest as well as customer interest pushes corporates. Although existing fixes remain part of the big picture, ETH's corporate structure is just beginning to settle in.

When we consider the ETH/USDT parity technically, the minor rising trend passes through the $2600 zone. Ethereum, which has a dual dip pattern, continues to look like a double dip if the $2910 level is broken. The jamming area varies between $2600-$2900 levels. We see ETH, which has a more reasonable graph than BTC, trying to react in the $2600 zone. Long positions can take precedence unless the minor uptrend hangs in the way. Otherwise, both the appearance and the perception may deteriorate below $2600. 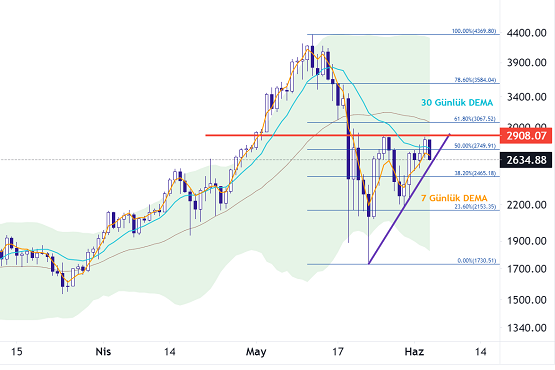 The AVAX lost about 7.6 percent this morning to $18.65. When we examine the AVAX/USDT pair technically, yesterday's daily close was above Fibo'23.60 tranche of $19.5, but it fell below this level with the market's sell-off. Maintaining its rising trend, AVAX will continue its price movement towards its key resistance level of $21.4 if it can close above $19.5 per day. When we examine it in a 4-hour period, we see that the stock is signaling a sell and RSI is cutting down to its important support level of 53.82. Looking at these metrics, if the sales pressure in the market continues during the day, rejecting its rising trend can be tested again at $17.60 and $17.00 if it does not receive support at this level. However, the slightly rising trend is still more protected, with it passing $17.75. Therefore, the stop loss of receiving positions can be this region and below. 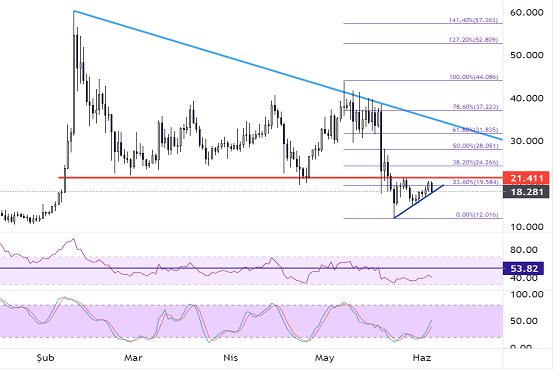 Ripple gained about 5.5 percent this morning to $0.985. The correspondence between Ripple and the SEC will be added today. We recently detailed in our newsletters that Ripple has no relationship between XRP prices and Ripple's commercial sales and offers supportive arguments. Lawyers for Ripple founders Chris Larsen and Brad Garlinghouse, who are now the focus of the SEC's allegations, will write a letter responding to the SEC's allegations, and are expected to explain in the letter that Larsen and Garlinghouse had no influence on the XRP price. In addition, Ripple is trying to gather strong evidence for its defense in the case by collecting data on XRP sales on exchanges outside the United States.

When we examined the XRP/USDT pair technically, yesterday it tested the Fibo's $1.05 tranche of 38.20 tranches, and the reaction it received from these levels resulted in price withdrawals. Sales, which dominate the market today, have reduced XRP to $0.93, where the 14-day DEMA stands at $0.94. When we look at the daily period, we see that the stockpile continues to signal the buy. XRP, which started the day negative with sales on the Asian side, can retest its emerging trend as of May 23 and the Fibo's $0.90 level of 23.60. We remain positive for the medium and long-term outlook for XRP, which continues to receive positive case news. 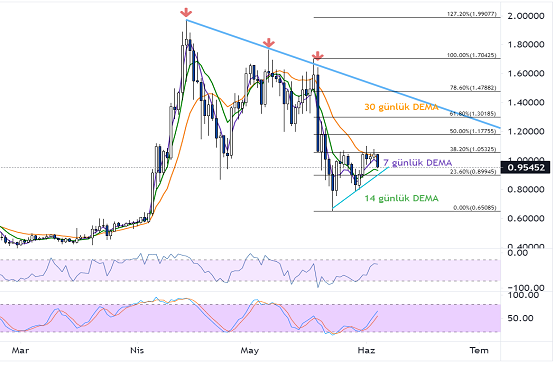 LTC is priced at $175.5 this morning, down about 8.6 percent. LTC dynamics, rather than the seller's view of the market, show a positive hand. Grayscale premium rose to 1808.5 percent. This suggests that LTC's fund performance continues to perform much better than its spot performance. Looking at Grayscale's trading in the last 24 hours, they have added 35 LTCs to their portfolio. Although short-term declines are possible, we remain positive for LTC in the macro image.

When we consider LTC/USDT technically, LTC, which it tested yesterday on May 10th, has risen above the secondary descending trend that existed from the record high of $420, but LTC has returned to this downward trend. When we look at it over a four-hour period, yesterday Bollinger also broke the rising minor trend that existed from May 23 with sales from its upper band and Fibo's $190 zone of $38.20. LTC, which found support at the Bollinger sub-band of $175 in the morning, may experience retreats to Fibo'23.60 tranche to $157 if it does not hold at these levels. The $175 level is exactly the kind of support level. 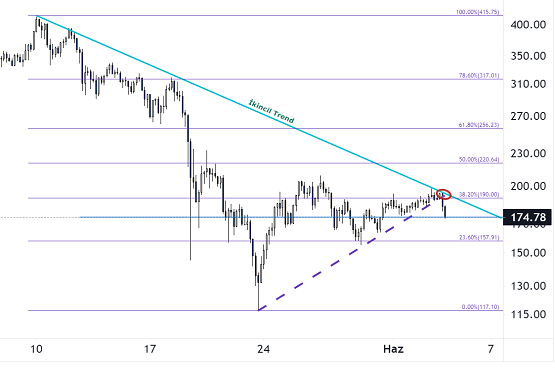 LINK, which is down 10 percent in the morning, is priced at $29.00. When we examine the chain data, we see that although there has been an increase in new and balanced addresses, the impact of this increase remains weak. With the news on June 3rd, it was announced that developers could now start creating connected smart contracts on Avalanche using Chainlink's decentralized oracle networks. Although there is a positive news flow for LINK, short-term withdrawals may occur, but it may not disrupt the course.

When we consider LINK/USDT technically, LINK breaks the minor downward trend that existed from May 18, and now rejects this trend at $28.75. In the LINK/USDT parity, where the horizontal trend prevails in the 4-hour period, we see that the stock is signaling the sell. For LINK, which breaks the support level at $30 downwards, the next support is at Fibo's $26.52, which is Fibo'38.20 if the minor downward trend at $28.75 does not work as support. While we are reading the long-term outlook positively, we think short-term downward movements may continue. It can react to $30.00 during the day unless it's $28.50 behind. 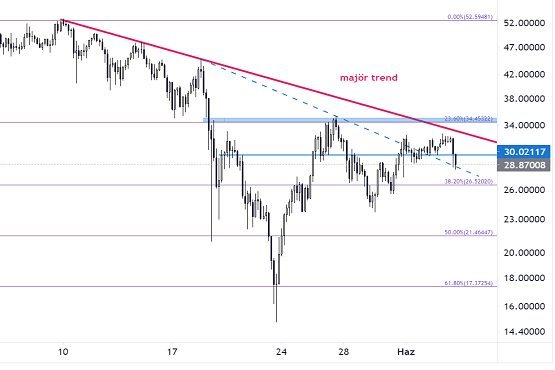 BAT is priced at $0.762 this morning, down about 8.2 percent. BAT, which broke its downward trend starting may 7 with the upward movements of the past few days, could not hold on to this trend and broke it down again from $0.78. However, the next support for BAT, which has broken the rising minor trend starting may 23, is at $0.735, Fibo'38.2 tranche. When we look at the inventory in the 4-hour period, we see that it signals sell and that the rising trend in RSI is breaking downwards. We think short-term downward price movements will occur. It is useful to evaluate stop-loss purchases close to support levels. 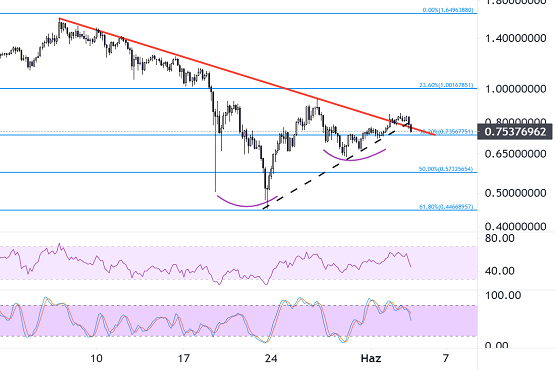