Now is the Time to Buy BTC, According to Pantera Capital CEO

Dan Morehead, CEO of Pantera Capital, which manages $4.8 billion in assets, stated that he thinks it is a good time to buy Bitcoin.

Cryptocurrency Exchanges Ban Their Own Coins In South Korea

While South Korean crypto exchanges are prohibited from using their own issued coins, the law also covers coins issued by family members, spouses or distant relatives of the owners of cryptocurrency exchanges.

Bitcoin Mining Council to Focus on False and Negative News

While the Bitcoin Mining Council stated that they should fight the false news about Bitcoin mining, Michael Saylor stated that the problem is not BTC but the negative headlines in the media.

Rejection from the World Bank to El Salvador

El Salvador had requested support from the World Bank on technical issues for the use of BTC as legal currency alongside the dollar. The World Bank rejected this request, citing a lack of environmental and transparency in Bitcoin.

If the Customer Requests, General Motors Can Receive Payments in BTC

The CEO of US-based General Motors stated that if there is customer demand, nothing will prevent them from accepting Bitcoin for payments.

Cryptocurrency Holders Increase in the UK

The UK's financial services regulator, the Financial Conduct Authority, has released new research that reveals a steady increase in the number of adults who own cryptocurrencies.

GSA to Sell LTC and BTC at Auction

The General Services Auction Administration (GSA), which auctions off assets obtained from illegal transactions in the US, will sell 150.2 Litecoins and 8,952 Bitcoins.

The Central American Bank for Economic Integration (CABEI) stated that it will help El Salvador to legally implement Bitcoin, while the CABEI President expressed that they are very optimistic about the issue.

The National Republican Congressional Committee (NRCC), the campaign arm of Republicans in the US, is preparing to receive donations in cryptocurrency.

Miners in China Will Use More Renewable Energy

Some of China's Bitcoin miners are planning to use more renewable energy sources to power large mining rigs.

Turkey Energy Markets Operations Inc. While developing a Renewable Energy Resource Guarantee System using Blockchain technology to reach renewable energy sources, he stated that everyone from large-scale organizations to individual consumers can use the system.

Steps Can Be Taken on Regulation in July

In the news published in the local source, it was stated that while cryptocurrencies were on the agenda at the AK Party group meeting, a prohibitive perspective was not dominant and that regulations specific to cryptocurrency companies could come before the second half of July.

Bitcoin is trading in the 38k region this morning. While the markets were trying to digest what emerged after the FOMC meeting, which we covered in detail in our bulletin yesterday, general markets fell, the dollar rose and gold crashed hard. On the other hand, although we expect Fed pressure to continue in the short-term, long-term HODL net positions turned positive for the first time since November. In addition to the fact that we are still in the band of 30-41 thousand dollars, this region is one of the regions that we can call cheap for a long time. Therefore, these regions, which several institutional and wealthy fund managers entered, also triggered whales, and in the last 25 days, 90,000 BTC has accumulated in whale accounts.

When we consider BTC/USDT technically, it has seen the 37 thousand region by backtesting the wedge it broke. This decline, caused by the dollar index, caused the technical support areas to be retested. Currently, there are no volume sales. In general terms, we are in the region of 30-41 thousand dollars. The failure to break the 200-day EMA at 41 thousand was another sign of weakness. For now, there is no hard or bulky appearance. We will be stuck in the upper middle band of this horizontal band as long as $36,900 does not fall behind. 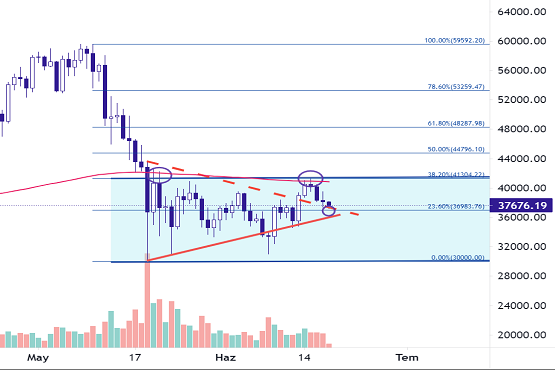 Ethereum is trading sideways at $2355 in the morning. ETH, which had seen $2600 levels in the previous days, declined to $2300 levels due to the decreases seen with the Fed statements in the markets that started to recover. There is a total of 19.67 million ETH with the recent increase in the amount of ETH held in the top 10 Ethereum wallets over the exchange. This is the largest amount seen since 2016. The fact that large investors continue to buy ETH and the upcoming updates for the transition to ETH 2.0 create expectations in ETH pricing.

When we consider the ETH/USDT parity technically, ETH, which broke the rising trend from the bottom level of May 23 the previous day, tested this trend again, but closed below this trend with the reactions it saw at $ 2465, which is the Fibo'38.20 slice. Although the long-term outlook is positive, upward movements are expected to be evident with the daily closing above the 50-day EMA. In the short term, the direction is horizontal. 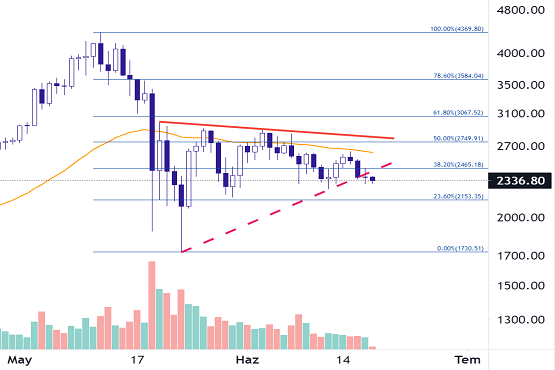 AVAX, which moves sideways in the morning hours, is priced at $14.90. When we consider the AVAX/USDT parity technically, there is TOBO formation in AVAX, which is dominated by horizontal price movement below the resistance at $ 15.57. This resistance level is expected to be broken to confirm the formation with the neckline at the $15.57 resistance level. If the pattern is confirmed, price movements towards its target of $18.7 can occur. The RSI returning from the support level at 44 in the 4-hour period and the stochastic signaling buy indicate that there is a comfortable area for upside movements. The short-term outlook is flat. 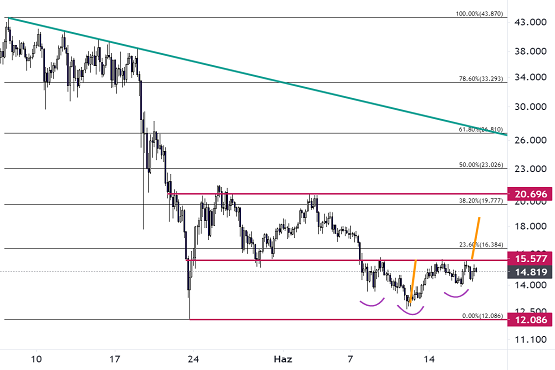 XRP, which fell by 0.30% during Ripple hours, is priced at $ 0.83. There is no positive or negative news flow for XRP, which is moving down with the general decline in the market. After the latest developments, the most important dates in the case will be 31 August and 15 October, while we will be following the correspondence that may occur in the interim dates. When we examine the XRP/USDT parity technically, XRP, which cut the lower band of the rising channel that started on May 23 in the daily period, retested the lower channel of the channel yesterday. As we mentioned in the bulletin yesterday, we expect a pullback towards the support levels in the $0.794 region as the channel lower band has been retested and pricing has not started within the channel again. In parallel with the general market, horizontal price movement in XRP will continue in the short term. 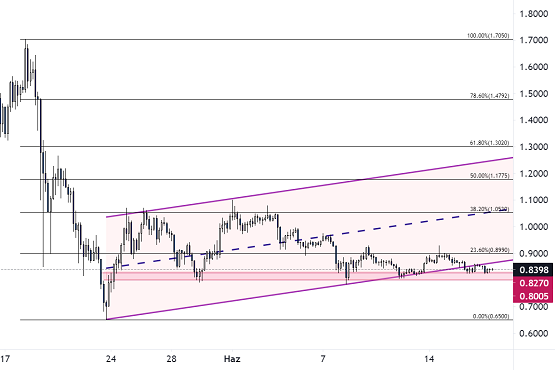 LTC is priced at $165.78, depreciating by about 1 percent this morning. When we check the latest situation in the Grayscale fund, we see that 5762 new LTC funds have been purchased in the past 24 hours. We see that the LTC fund, whose premium is 682.96%, outperforms the spot. There is also a horizontal price trend in LTC due to BTC's price movements and news flows that suppress the entire market.

When we consider LTC/USDT technically, we see that the price movement has continued above the descending trend that has existed since May 10 for the last 4 days. However, there is a price trend in LTC that has been stuck in the symmetrical triangle since May 20. We think this squeeze will ease in one direction soon, but the accompanying price movements will be limited in both directions. In this period when transaction volumes are low, price movements in BTC will determine the direction. 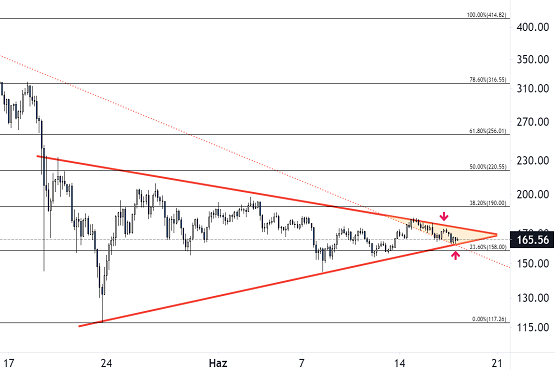 LINK is priced at $22.95, depreciating by about 2 percent this morning. Although the price movements throughout the market do not excite the investors, LINK purchases continue on the institutional investor side. Adding 622 LINK funds in the last 24 hours, Grayscale has made 9739 additions in the last 30 days. Although institutional investor interest is important, determining the direction in BTC is of great importance for the market.

When we consider the LINK/USDT parity technically, there is a horizontal and compressed price movement between the descending trend from the peak level of May 10 and the rising trend from the lower level of May 23rd. Finding support at $22.24 today, LINK is in the 4-hour period %R and stochastic is in the oversold zone. Opportunities can be evaluated with trend breaks for LINK, where there are suitable conditions for upward price movement. 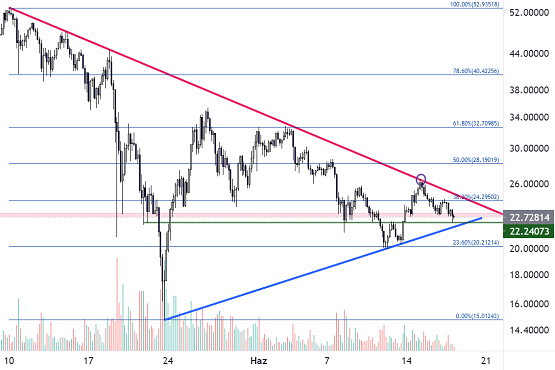 BAT is priced at $0.64, depreciating by about 1 percent this morning. When we consider the BAT/USDT parity technically, it is priced close to the lower band of the ascending channel that has existed since May 23. BAT, which is not trending in the 4-hour period, continues its life action above the $0.628 support level. BAT, which could not break the current descending trend as of May 27 despite testing 5 times, exhibits a price movement stuck between the lower channel band and this descending trend. In the 4-hour period, the stochastic signaled to buy from the oversold zone, but the short-term direction is flat as the low trading volumes and BTC's failure to break the key resistance levels suppress the overall price movements in the market. Purchases with trend breaks can be evaluated using stop-loss. 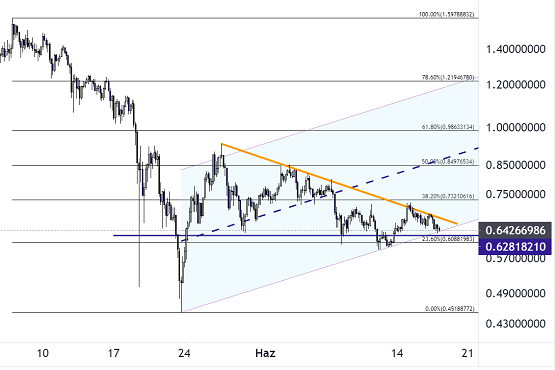