Parents Investing in Crypto in America

According to a report by CNBC, the number of families investing in crypto assets for their children's college expenses in the United States has increased significantly. As a result of the survey conducted to 1250 parents, it was stated that 87% of the families who invested in their children's education expenses also invested in crypto assets. The published report explains how to minimize the risk in these investments, on which criteria the investment should be made and how the portfolio should be created.

Schroders, a well-established asset management company based in the UK, has acquired a stake in the New York-based company Forteus for research into the blockchain sector. It was announced that Forteus will be responsible for providing investment solutions such as yield generation, portfolio management and tokenization. Commenting on investments in blockchain technology, Schroders CEO Harrison stated that they not only build on the efficiency of existing solutions, but also enable the liberation of private assets, which will represent new frontiers in technological and financial innovation.

Crypto borrowing company Voyager, one of the companies that has been on the agenda the most since the Luna incident, announced its bankruptcy after having quite problematic days. Following this news, Alameda Research and Sam Bankman Fried, the owner of a crypto exchange, announced that they had made an offer for the purchase of Voyager. In the proposal, Voyager users would start trading on the other crypto exchange with as much balance as they would receive, while at the same time the company's other receivables and debts would be transferred for a certain amount. According to a statement made yesterday, Voyager announced that it rejected this offer, considering that the offer was low and could harm customers.

Barclays, one of the UK's largest banks, has announced its share purchase from the Copper company at a time when the crypto money market is shaken by news of bankruptcy. Copper, whose market value is approaching $ 2 billion values; offers cryptocurrency storage, clearing and trading services. According to rumors, Barclays' investment will be in the first round of millions of dollars.

The 3rd Largest in the U.S. His political party has described Bitcoin as a "decentralized monetary revolution"

Bitcoin and other crypto assets are getting a lot of attention, especially in America. For this reason, politicians' interest, curiosity and statements on this issue have increased considerably. Recently, the Libertarian Party expressed its positive predictions and opinions about Bitcoin on its Twitter account. He noted that Bitcon was leading a decentralized monetary revolution. He also referred to Bitcoin as "the greatest means of liberation that humanity has ever created." The Libertarian Party is the 3rd largest political party in the United States after the Democratic Party and the Republican Party.

Prince William Rudolf Lobkowicz of the Czech Republic is considering using NFT to preserve and secure family histories. It is planned that the special works of art owned by the family will be turned into NFT and stored. This art collection, which dates back to approximately 600 years, is the 2nd century. It is known that it was stolen 2 times in World War II. Switching the works to NFT format and exhibiting them at the House of Lobkowicz will ensure both the family's history and the safeness of the works.

Bitcoin's rise led by Ethereum has been replaced by a decline with the passing of the momentum caused by the news of the merge. While 75 and 100 bp are being talked about this week when the interest rate decision will be announced in the US, this crypto may cause pre-announcement outflows from assets. Depending on the path to be followed by the Fed after the decision to be announced on Wednesday, it will be more accurate to determine a direction for the crypto asset market. Until then, we expect Bitcoin to show a low movement and a weak image.

Bitcoin is priced at $ 21,083 with a loss of 1.07% in the morning hours. After breaking the $24,000 level, Bitcon entered a downtrend and fell to $21,000 levels. Bitcoin, which first broke the upper band of the channel at $ 23,000 and returned into its channel, when we look at the 4-hour chart, we see that it broke its downward trend last night. Bitcoin, which is approaching the 20,800 levels, which is the channel middle band, will create smaller opportunities for a while with the support it will see from here. 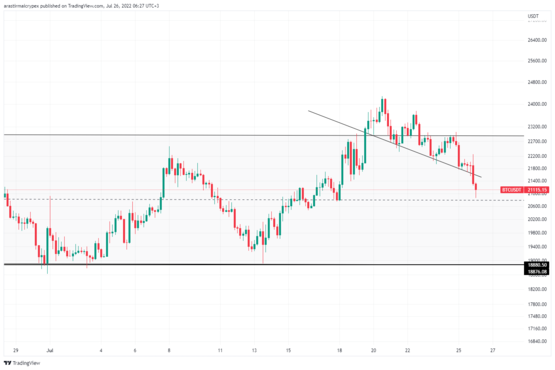 ETH, which lost 1.31% of its value in the morning hours today, is priced at $ 1421. After the 1650 levels were seen in Ethereum, we see a steady sell as of Sunday night. It broke the support at 1620, then 1545 and 1490 levels to the downside and is currently pricing in at $1430. We think that if the downward movement continues, it will receive support between the blue and painted 1325-1370 levels, and even if there is no return from these levels, it can create small opportunities. 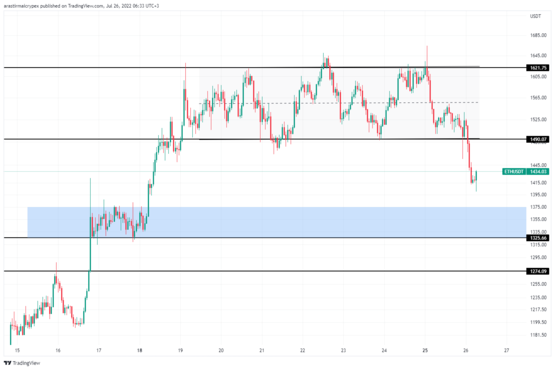 AVAX, which has lost 0.54% of its value as of the morning hours, is priced at $ 20.82. AVAX, which broke below the channel upper band at the $ 22 level, returned to the channel after a 1-week uptrend. AVAX, which is currently trading at the 20.80 levels, which previously served as support, may fall to 18.90 levels if this level is broken. In AVAX, which has seen above-average sales volumes in the last 3 bars, it would be logical to expect a weak and weak price movement until the Fed statements. 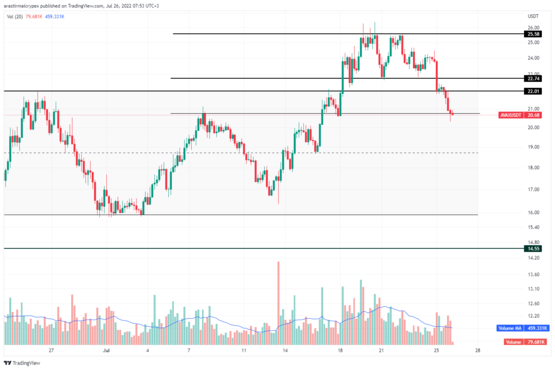 XRP, which lost 0.39% of its value in the morning, is priced at $ 0.3350. After testing the breakdown of 0.3780 levels, Ripple, which started a falling movement with the arrival of the breakout, fell to the upper band of the channel to 0.3450 levels and then tested the downside breakdown of the ratio. Ripple, which managed to break out last night, is currently pricing in 0.3350 levels in the middle of the upper band of the channel. If it continues its bearish movement, we can say that the channel mid-band at 0.3260 levels will be the most important support point in front of us. 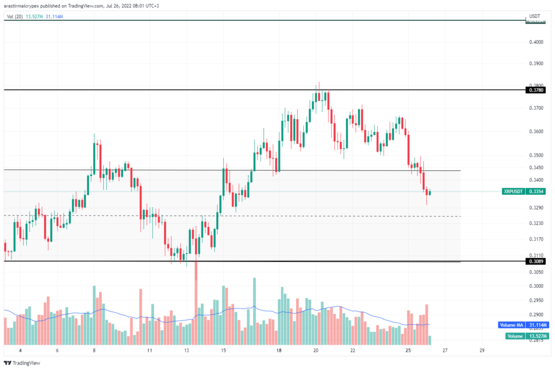 LTC is trading at $53.61, down 0.72% as of the morning hours. LTC, which has spent the last few weeks with a very weak pricing, has been in the same channel for a long time. LTC, which tested the upper band of the channel at $ 60.50 but failed to break it, then started its downward movement and managed to break the channel middle band of 54.80 to the downside. A possible 5% depreciation in this period when Bitcoin seems weak, falling to $ 19,000 levels, LTC, whose price movements already seem quite weak, may lose close to 20% of its values and fall to the 40-44 dollar band. 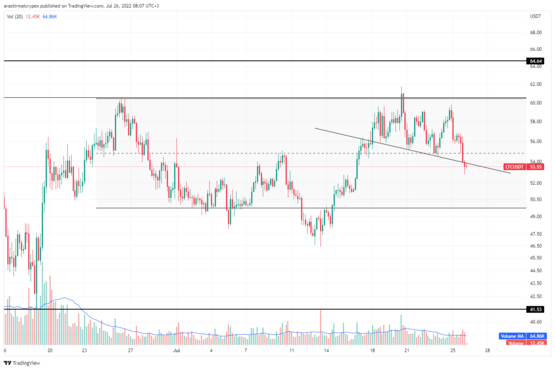 LINK is down 0.8% at $6,378 today. After breaking the channel upwards, LINK managed to rise to 7.50 levels and then moved to a falling triangle movement. Although it has repeatedly received support from the 6.60 level and made an upward turn, there has been a downward breakdown as of last night hours. LINK, where the sales volume also increased, saw a reaction from there after falling to the channel middle band of 6.25 and reached the current price level. We can say that LINK will receive support from the channel middle band again if the sale in the market continues, but if that region is broken, the channel lower band at the level of 5,917 will work. 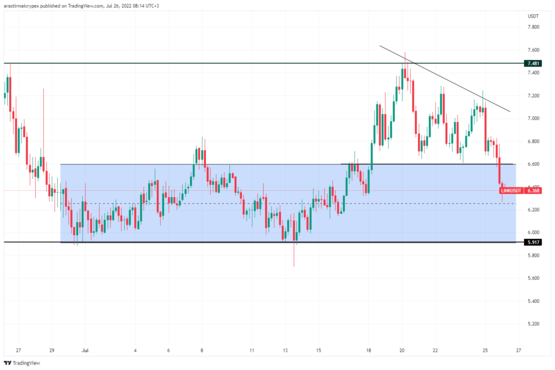 BAT is trading at $0.3604, up 0.5% as of the morning hours. Continuing its downward movement after breaking the middle band of its small channel, BAT reached the lower band of its 4-hour channel and managed to break the ratio. BAT, which then returns to the channel with the reaction reception from 0.35 levels, can fall to 0.30 levels, which is the lower band of the daily channel, if the downside breakdown of this level is confirmed. 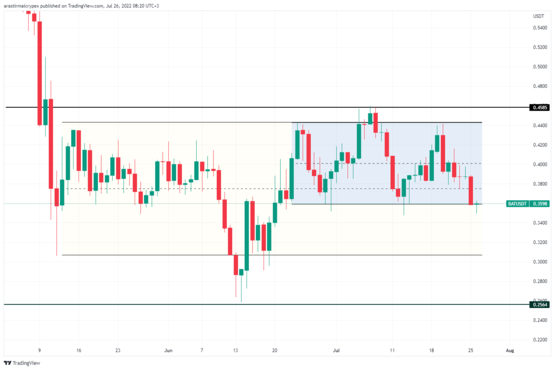