In El Salvador, the payment of salaries in Bitcoin has been raised, with the country's Labour Minister saying such a situation is not yet ready.


Miners Prepare to Move From China to North America
With mining activities banned in some provinces in China, many Chinese mining companies have been diverted to North America, especially Texas.

SEC Delays VanEck's ETF Request Again
The SEC has not made up its mind about the Bitcoin ETF request made by VanEck, but has again postponed the decision date by 45 days.

Clean Energy Rate in BTC Mining Is 50% After Pressures in China
Four separate provinces in China continued to look for solutions to reduce environmental damage in mining, with increased pressures from its ban on BTC mining, while the basic energy content in mining rose above 50%.

Tunisia Will No Longer Define Bitcoin Purchases as Crimes
Tunisian Economy Minister Ali Kooli said buying BTC in Tunisia would no longer be a crime.

Adoption of Digital Euro Could Reduce Eurozone Deposits, According to Morgan Stanley
Morgan Stanley analysts said that if the digital euro was widely adopted, it could lead to an 8% drop in deposits from eurozone banks.

Whales Continue to Buy in Bitcoin

Despite the price fluctuations, whales continued to accumulate by buying 90,000 BTC in the last 25 days.

Global markets had Fed pricing last night, and almost all financial instruments faced sales. Bitcoin, which changed horizontally this morning from $38,750, also made a significant technical return yesterday. Fomc members predicted two interest rate increases in 2023, while Powell found high inflation temporary. However, the SEC extended VanEck's Bitcoin ETF application by 45 days. Whether the SEC will allow cryptocurrency derivatives is crucial. They have been waiting for these decisions since mid-May. On the chain side, hodls, which have been negative since November, turned positive for the first time.

When we consider BTC/USDT technically, the $41,000 level passed by the 200-day EMA could not be broken, and the "evening star" candle formation that occurred there expressed weakness. We found it healthy to be $38,800 behind. We have not yet emerged from the $30,000-$41,000 horizontal zone, which is still more broadband range in Bitcoin. It should not go behind $38,800 so that the purchasing power does not disappear. 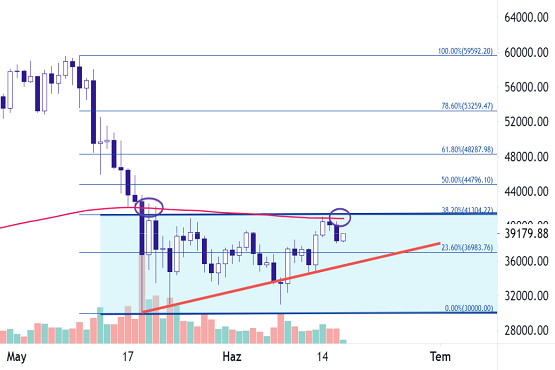 Ethereum is trading horizontally at $2420 in the morning. Ethereum, which tested the $2600 level yesterday but could not break it, returned to the $2400 zone due to the Fed. In contrast, we expect July to be quite lively for ETH. For ETH, where there are developments and expectations, there has also been a recent turnaround in the number of active and new addresses. It may be creating anticipation, especially in pricing for the london hard fork coming on July 31 and ETH after.

When we consider the ETH/USDT pair technically, the previous day tested but unbreakable 50 days of EMA worked. While the $2,400 level, which is a post-Fed triangle support, was tested, we think it was important that it did not sag below this area. As long as triangular support holds at $2400, the 50-day EMA can be expected to be retested. 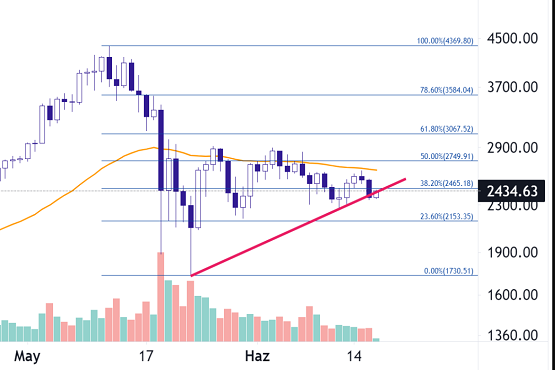 AVAX, which gained about 4 percent in the morning, is priced at $14.60. When we consider the AVAX/USDT pair technically, AVAX, which broke its downward trend from May 19 upwards from $14.70, reacted from resistance at $15.73. The $15.73 level, which also corresponds to Bollinger's mid-band during the daily period, is read as a critical resistance zone. With the breakdown of this region, it can be expected to trend in the direction of ascension. The TOBO formation, which will occur especially if the $15.70 level is broken, points to the levels of $18.65. 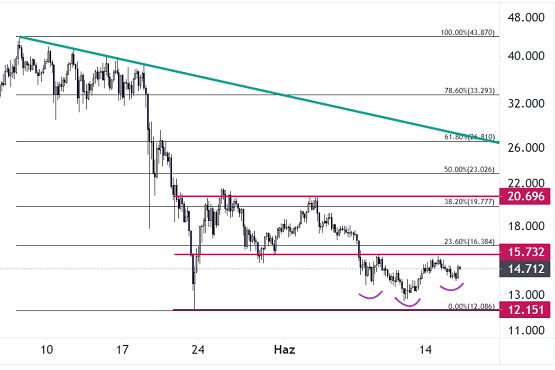 Ripple gained about 2.6 percent to $0.854 in the morning. Referring to the recent developments in the case, judge Netburn noted that the SEC's goodwill in the case may be questionable, citing why the SEC considers Bitcoin and Ethereum securities and Ripple as securities. It is not yet known whether there will be a response from the SEC on this issue, but the most important first date announced in the case as of June 17 is August 31. On August 31, the SEC will be required to complete the general discovery process and submit specific documents. In addition, the presence of XRPL among the promising projects in the World Economic Forum report is a positive development for Ripple. Considering all the developments, we remain positive in our Ripple view in the long run.

When we examine the XRP/USDT parity technically, the lower band of the rising channel, which started on May 23rd in the daily period, cut down yesterday and closed daily underneath. XRP, which today saw a re-price movement towards the channel sub-band, expects it to find support from the area around $0.794 if this movement remains a rejection. If daily closures come under this region, the XRP may continue to decline. If it starts to be priced within the channel again, there will be rises for XRP, which continues to have positive news flows. 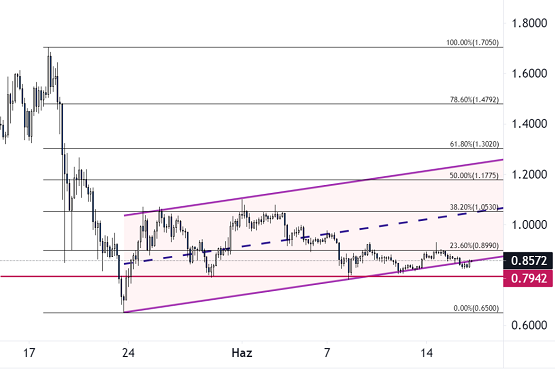 LTC gained about 2.5 percent this morning to $171.00. There was a sell-on market last night before the Fed announcements. Due to BTC's price movements and news flows that suppress the entire market, LTC also has a horizontal price course.

When we consider LTC/USDT technically, LTC, which again broke its downward trend from May 10 with pre-Fed sales in the daily period, is priced above it with the support that came in earlier today. LtC has a price trajectory that is stuck from May 20. We think this squeeze will soon loosen in one direction, but the price movements that will come with it will be limited in both directions. In this period of low trading volumes, it will be the price movements in BTC that will determine the direction. 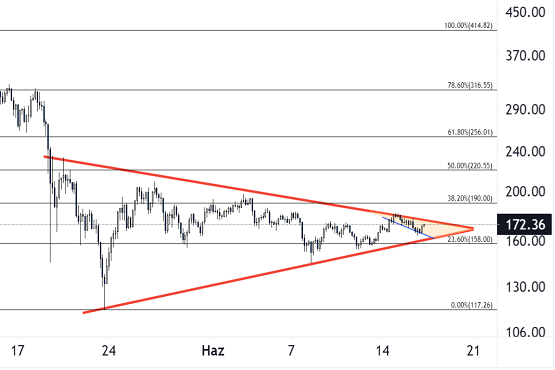 LINK gained about 3.5 percent this morning to price just below Fibo's resistance of $24.29, a slice of $38.20. On the institutional investor side, Grayscale has added 969 units to its LINK fund in the last 24 hours. We see that BTC's price movements have an impact on the overall state of the market. With BTC's 200-day average not broken, horizontal market movements continue. LINK, which recently retested the existing degrading channel from May 10, failed to break it and found support at $22.80 yesterday. As long as it does not fall below this level of support, it will retest the descending trend. As horizontal market conditions continue, stop-loss transactions with close to support resistances or breakdowns are seen as the appropriate strategy. 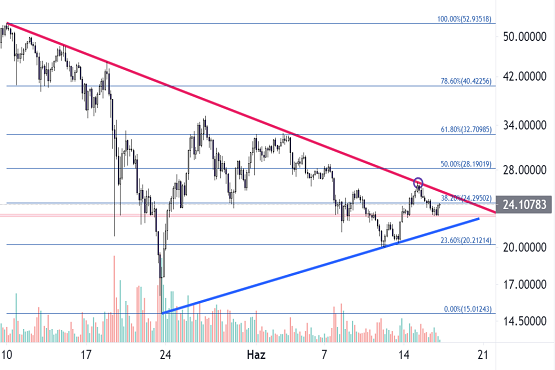 BAT is up about 3.5 percent this morning at $0.677. When we consider bat/usdt parity technically, it continues to move prices above the major descending trend that exists from May 7. For BAT, which is located near the lower band of the rising channel starting on May 23, RSI found support at 48.20 in a 4-hour period, intersecting in the direction of stochastic al. Short-term upward movements are expected for BAT, which is on a major downward trend. In market conditions suppressed by Fed news and BTC's price movements, the magnitude of these movements may be limited. The next short-term target for BAT, which is supported by its major downward trend of $0.65, is the resistance level at $0.73, Fibo'38.20. 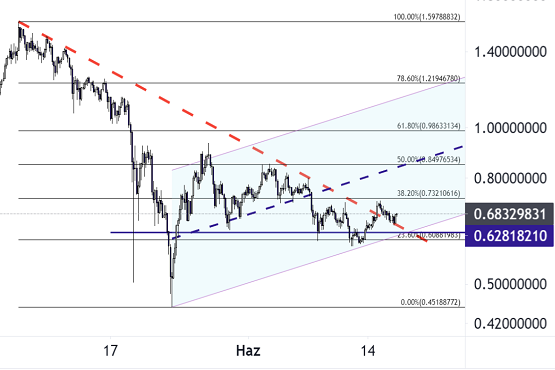