Allowing its users to buy cryptocurrency since October 2020, PayPal has long been criticized for not allowing transfers to third party wallets. Upon criticisms, Jose Fernandez Ponte has made a statement that they have started to work on this subject.

Goldman Sachs has stated that the institutional investors are driven to Bitcoin by fear of missing out (FOMO). The institutions still face barriers while entering the markets, and a lot of investment funds and asset managers have no authority to make investments in cryptocurrencies.

Drawing attention to the grievances caused by the lack of regulation in cryptocurrency exchanges, Deputy Nihat Yeşil offered to establish a research commission to the Presidency of the Turkish Grand National Assembly in order to prevent these grievances.

Iranian President Hassan Rouhani announced that he prohibits Bitcoin mining until September 22, citing the problems caused by the increase in electricity consumption.

Everybody in the Meeting Are Passionate Believers in Decentralization, Says Michael Saylor

In Consensus 2021 MicroStrategy CEO Michael Saylor has stated that everybody who participated in the recent meeting, including Elon Musk, are passionate believers in decentralization, and added that the environmental concerns should not be evaluated by the parties who are not in favor of the sector.

The institution controlling the adverts standards has banned a local cryptocurrency exchange adverts citing it was irresponsible and misleading.

FED Vice Chair Highlights the Priority of Regulations on Cryptocurrencies

FED Vice President Quarles has confirmed that the institutions affiliated to the USA government are working together on cryptocurrencies and highlighted that this subject is of high priority.

Bitcoin started yesterday morning's $40,000 movement and continues at $37,700 with some sellers today. After China, there was some sales in the crypto market after Iran gave time for mining activities until September. We cannot see a more important reversal sign in the chain data yet, but we find the selling pressure decreasing on the other side and the support of Bitcoin in the future price movements positive. Yesterday, large amounts of BTC transfers also took place between wallets and exchanges. Despite this, the fact that there was no change in the number of new and active accounts was not read in the positive table.

When we consider BTC/USDT technically, we continue in horizontal progress between 37,200 and 40,600, corresponding to weekly and monthly averages. In the daily period, the Bollinger mid-band is passing at $37,500 and we are trying to maintain permanence on this point. While we remain on the $37,000 band, levels of $40,000 and above can be tested again during the day. Trends tend to recover and progress is towards consolidating Asian sales. 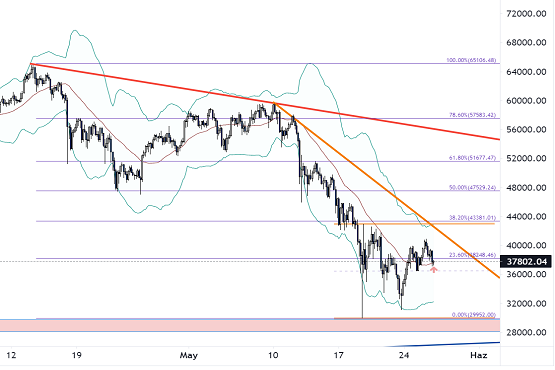 Ethereum is down 7% this morning due to sales from Asia, but is still priced at $2,680, above the $2,600 level. Looking at addresses in Glassnode, some ETH purchases are seen in wallets. In addition, new position purchases are decreasing and the number of positions with liquidity on the sell side is also increasing, even though there is some ETH placed in the stock markets. It is seen that the chain data is not very strong, but on the other hand, ETH has a desire to hold on.

Technically speaking, ETH/USDT could not stay above the $2,750 level, which corresponds to the Fibo'50 retracement zone. In the withdrawals, we see retractions for the correct retest in the descending trend that it broke before. If it wants to test this area, $2,565 levels can be tried. A minor double peak occurred between the levels of $2,670- $2,900. When we consider this zone, it seems that the correction may be towards the $2,500 levels. 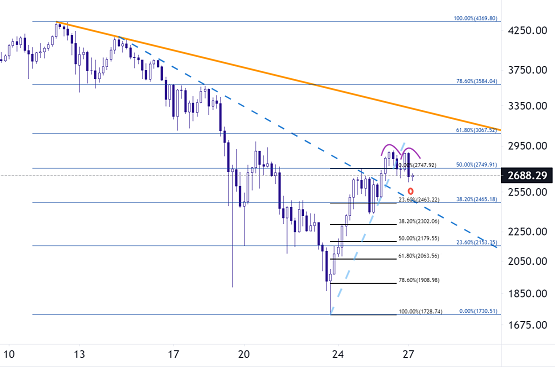 AVAX, which we saw to drop by 5% in the morning hours, is priced at $19.55. Avalanche, a rapidly growing ecosystem, recently announced that it has added 189 new projects to its ecosystem in the past eight months. Even if we see that the AVAX movement is downward in the morning hours with the general decrease in the market, we maintain our view that AVAX, which is lower than its competitors in terms of market value, is discounted.

When we examine the AVAX/USDT parity in daily period, we see that in addition to the stochastic buy direction intersection, the RSI is reversing from a level close to the oversold zone. AVAX, which broke the $19.5 upward, which corresponds to the Fibo'23.6 slice yesterday, kept above this level as of its daily close. We think that AVAX, which has retested this level today, will continue its move towards the key resistance level located at $23.9 as long as it does not close below. If there are no negative news flows that will affect the markets, we evaluate the direction as upward and positive 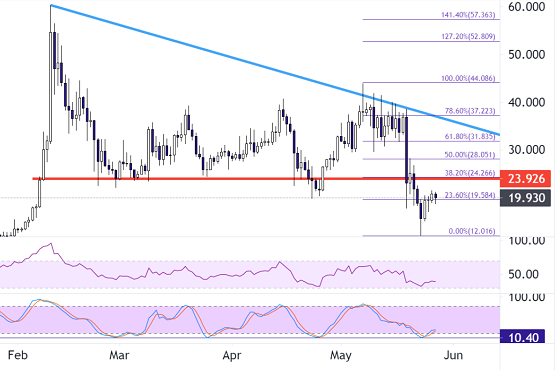 Ripple, which we saw to drop by 7% in the morning hours, is priced at $0.95. As we mentioned in our post on May 26, a response to the SEC's requests was written by Ripple. Speaking at the Consensus 2021 event yesterday, Ripple CEO Brad Garlinghouse pointed out that Ripple and XRP are not the same, and that this issue is no longer just about Ripple and XRP, but is a discovery phase for the industry. Today, the SEC will respond against Ripple's response, Ripple's response was found strong and positively affected pricing, albeit limited. If the statement to be made by the SEC is interpreted positively for Ripple, it can provide upward support to pricing.

When we consider the XRP/USDT pair technically, it tested the weekly average that it opened daily above the two-week average, but with an overall decline in the market. We see the $0.92 level, where the weekly average for XRP is located, as a strong support point, and we foresee that breaking this resistance level will be critical as the Fibo cannot hold above the $0.99 band, which corresponds to the 141.40 retracement level. After the weekly average, we see that the most important support level is the $0.88 band, which corresponds to the 161.80% slice of the Fibonacci retracement. We anticipate that it would be appropriate to benefit from the 8% price change in the $0.92-1.00 band with a short-term buy-sell strategy, especially due to the news flow and market fluctuations. 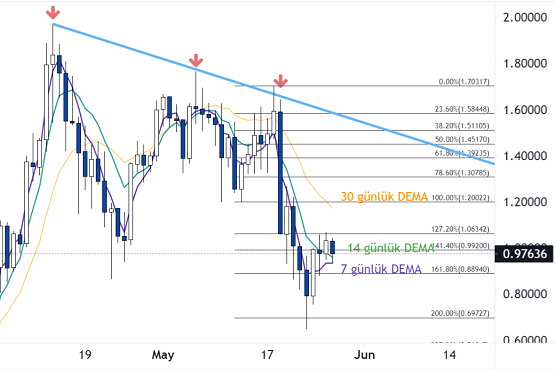 Litecoin is losing about 6.5% this morning, pricing at $185. When the chain data for LTC is examined, although there is a relative increase in the number of active and new wallets, when we look at the MVRV Z-Score value, we see that the price of LTC is at the buying level compared to its fair price. We read LTC positively in the medium and long term.

When we consider LTC/USDT technically, yesterday, it gained 62% value with the recovery it experienced from the bottom level of $117 on May 23. We see the Reverse Head and Shoulder Formation in LTC. However, when examined in a 4-hour period, we see that the momentum creates an upward trend and is at the support level. When the MACD is examined, there is a slowdown in the momentum of the upward movement, but it is still on the bullish side. Having made its daily close above the Fibo'38.2 zone at $190.9, LTC is currently priced below this level. If this level is exceeded again, we think LTC will continue its upward movement towards the descending trend line from $417, and in case of retraction, it will find support at $158, which is the Fibo'23.6 zone. For this reason, attention should be paid to resistance and surroundings and support purchases for buy positions. 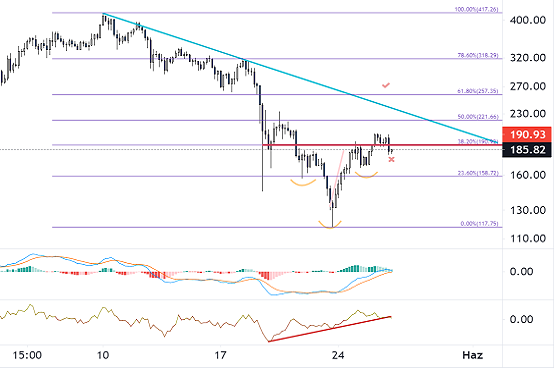 LINK is pricing at $31.5 this morning, with a loss of about 7%. When we look at the chain data for LINK, which is recovering faster than the market, the rapid recovery in the number of active and new addresses continues as of May 23. When we look at the net exit from the stock exchanges in a 1-hour period, the biggest exit occurred since June 29, 2019 with 359677 LINKs. For LINK, which led this return movement, the net exit from the stock markets shows the confidence of investors in LINK.

When we consider LINK/USDT technically, when we look at the 1-hour period, there is TOBO formation in LINK, which accelerates in the upward direction with the break of the minor falling trend. Important resistance levels before the TOBO target are the Fibo'23.6 zone at $34.45 and the $37-38 band corresponding to the downtrend. Yesterday, LINK reacted at $34.4, which corresponds to the Fibo'23.6 slice, and we see that the upward momentum slowed down and found support at $29.8. In case the upward price movements continue, increases towards the $37-38 band corresponding to the falling trend can be expected. In possible retracements, Fibo 38.2 slice 26.5 is an important support level. A positive image prevails in the medium and long term. 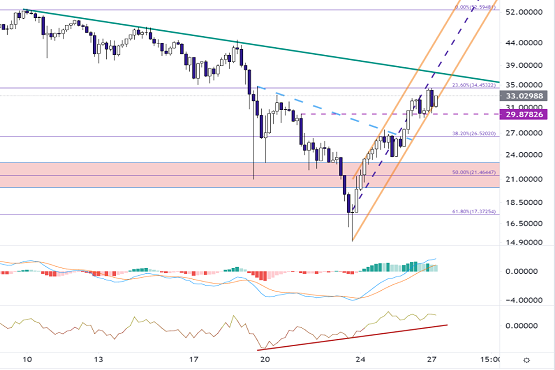 BAT, which we see decreasing by about 6% in the morning hours, is priced at $0.83 levels. When we examine the chain data, we see that the number of active and balanced accounts has gradually increased since May 23, although the Basic Attention Token has moved downwards with the general movement in the market since the daily opening, but the chain data show us that the interest in BAT is in an increasing trend and we interpret this situation positively.

When we consider the BAT/USDT parity technically, we see that the 7-day DEMA cut the two-week DEMA upwards yesterday and created a buy signal. Continuing its movement within the descending channel, BAT continues to move towards the mid-channel band of $0.92-0.94, but with the fall in the market, we see a downward price movement as of the morning hours. At this point, we foresee that it is appropriate to benefit with a short-term buy-sell strategy from a price movement of approximately 20% between $0.76, which corresponds to the Fibo'61.80 retracement level and also the weekly average, to $0.92, which corresponds to the channel mid-band. 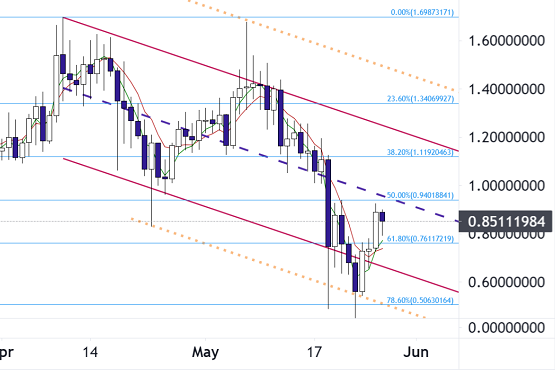