After Bitcoin fell to $ 31,000, liquidity in Bitcoin futures exceeded $ 1.47 billion on Sunday. The purges in the last 24 hours were recorded as $ 2.9 billion. The sharp decline of long positions and the record liquidation amount show that investors who opened bullish positions have taken a serious hit.

Gary Gensler, a leading financial regulator under the Obama administration, a professor of blockchain at MIT and known as a cryptocurrency friend, is expected to be appointed head of the US Securities and Exchange Commission (SEC) under Biden.

Volume Records From SushiSwap and PayPal

After seeing the biggest one-day drop in dollar terms in Bitcoin in the previous days, SushiSwap, a decentralized exchange, and PayPal saw record trading volume on their platforms. In the Crypto Money market, which has been quite volatile in recent days, additional investor interest in the sector did not go unnoticed.

UK Argued that XRP is Not a Security

The UK named Bitcoin, Ethereum, and XRP as "Tokens used as exchange tools" in the document for cryptocurrencies and stated that the mentioned products cannot be counted as money or securities.

Grayscale, the largest cryptocurrency fund, announced in the previous weeks that it stopped purchasing fund investors and would not accept customers for a while. In the announcement made after the break, it was stated that investors who want to invest in Grayscale funds will be accepted.

DeFi Platform Breaks 1 Inch Volume Record
The 1 Inch decentralized cryptocurrency exchange has reached a total transaction volume of $ 10 billion. On the last day when the record was completed, it was announced on the stock exchange that a trading volume of 222 million dollars in 24 hours and 1 billion dollars in the last week.

Bitcoin is trading at the $ 34,000 levels this morning, with a slight positive change. While the correction expectations in the market have increased, on the contrary, we continue to remain on the positive side. First of all, there is a discrepancy between the number of wallets with 1000 or more BTC in their account and the Bitcoin price. Second, the liquidity emerging in the futures markets has reached $ 8.2 billion for BTC alone, which is a record. It means potential for BTC or other cryptocurrencies. The increase in stablecoin supply shows the vitality of interest in the cryptocurrency industry. Basically, all variables support the uptrend in BTC as opposed to the stalling trend.

Technically speaking, we are not focusing on sales at the peak levels, but on the volume in the $ 30,800 behind. This region shows us that the interest of 30 thousand levels is intense. Unless the $ 32,360 level, which corresponds to the Fibo'50 slice and is the okay continuation point, is broken downwards, there will be a double bottom formation in the hourly and four-hour period. Persistence above $ 36,000 also points to $ 41,300 levels. Therefore, double hill formation has not yet been completed and this process will be followed. 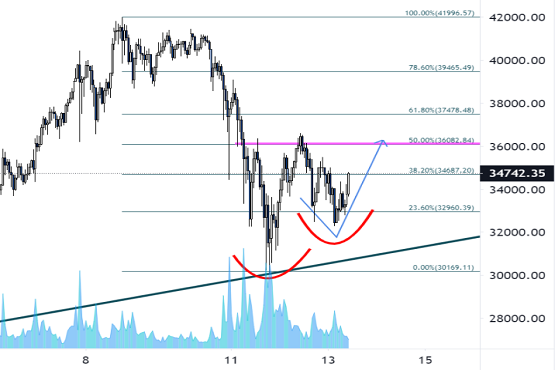 Ethereum is priced sideways around $ 1050. We have stated for some time that wages paid to miners have blocked the consensus and this has blocked the rise of ETH. There was a sharp decline in wages paid to miners during yesterday's course. From now on, we can watch the rise in ETH in parallel with the increase in the number of new and active accounts. Because Bitcoin dominance decreased from 71% to 68%. This is important news for ETH and other altcoins. In the ETH / BTC clipper, we have been mentioning that ETH points to a discount for a while. The ETH-BTC range, which has a difference of 5 points in the weekly period on the basis of yield, may create an upward potential to be closed by ETH.

When we consider ETH / USD technically; Although we cannot technically see the strong underlying news, there are some signs of recovery. Momentum and MACD are signaling a weak recovery in the four hour period. The minor descending trend that passed above $ 1060 will be followed throughout the day. Because the recovery in momentum started in this region. If the $ 1060 level breaks, the undersized move could gain momentum. 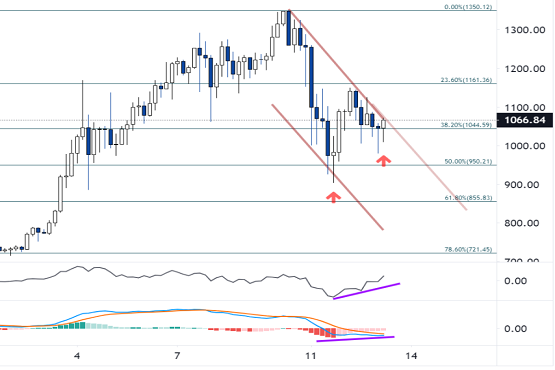 The AVAX / USD pair is pricing around $ 7.78, up 0.25%. The recent rapid rise shows that it maintains its positive stability, not being affected by the negative developments in the crypto money market. Avalanche has grown 75% in the past seven days and has become one of the best performing crypto assets in recent days. Ranking 48th by market value, Avalanche has a market value of $ 596.77 million with a 24-hour volume of $ 154.91 million. AVAX / USD pair will face resistance at $ 6.40, which corresponds to the Fibo'23.60 retracement for possible retracements. In case of persistence around $ 7.50, the positive trend may be increased in the upward movement and higher pricing may be in question. 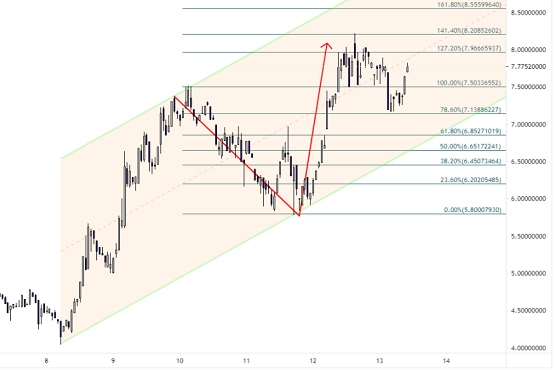 The XRP / USD pair is pricing around $ 0.29, up 0.3% in the morning hours. Successive good news contributes positively to XRP before the SEC case, which has not yet reached the decision stage. When Joe Biden's administration is certified, the new name to be appointed as SEC chief is a blockchain professor named Gary Gensler, which heralds XRP investors with a cryptocurrency-friendly SEC president. At the same time, the UK, known for its tough stance on crypto currencies, stated in the document published for crypto currencies that Bitcoin, Ethereum and XRP cannot be counted as securities, but can be accepted as an exchange tool. With the GateHub crypto exchange announcing that it will not stop XRP transactions until the SEC case is concluded after Uphold, the number of exchanges supporting XRP has started to increase. Unless we see a new negative flow in the worst pricing XRP, we may have a chance to see reactions.

When we examine the XRP / USD pair in the technical view, we see that it continues its course on the minor uptrend and after its upward reaction at the $ 0.25 level, it retests its $ 0.30 pricing. Fibo is priced around $ 0.29, staying above the uptrend after a slight move, with the $ 0.27 level supporting the $ 78.60 slice. Developments in favor of Ripple create positive effects in the XRP / USD parity and contribute to the positive course on the XRP side. 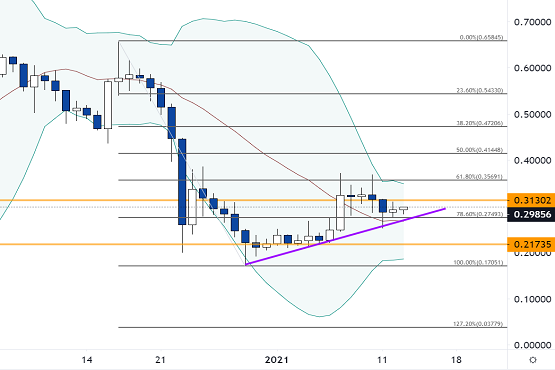 The LTC / USD pair is priced around $ 133.5 dollars this morning with horizontal and limited change. There is a withdrawal of $ 10 compared to the same hours the previous day. With this pullback, Litecoin fell below the $ 145 band, remaining below this critical level. It seems difficult for Litecoin to create a long-term declining trend as the losses that may occur as a result of the withdrawals will increase the buying appetite by creating the perception of cheap with these pricing. The BTC-LTC weekly payoff has also increased to 12 points. This situation shows the LTC discount.

When we examine the LTC / USD parity technically, we see that it remained below the $ 145 band and after testing $ 181, it decreased by 40% to $ 120, and at the time of writing it was at $ 133. The fact that the support for $ 118 is not broken and the strong movements that will emerge from this may bring purchases in Litecoin and show the pricing of $ 175 again. For now, Bitcoin and persistence above the $ 145 level will be followed. 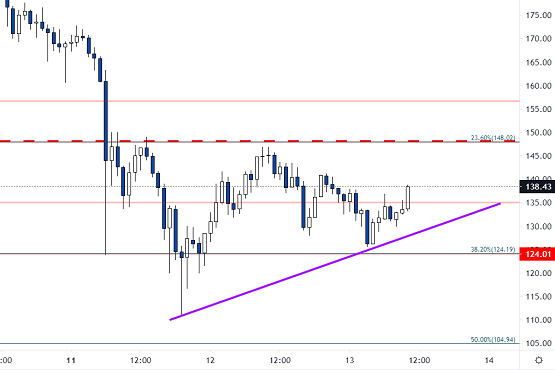 LINK / USD is pricing at $ 14.20 this morning, up 2%. LINK is an Ethereum consensus token and closely correlates with ETH. For both coins with a yield difference of about 5% between them, the decline of BTC's dominance provides good potential. Because if ETH can get rid of the weakness in its own dynamics, it can also attract LINK.

When we consider the LINK / USD parity technically; From a broad perspective, the $ 13.75 level in a band of $ 10 coincides with the midpoint. Today, as the price rises above the new current level, the support of $ 13.75 will be followed throughout the day. Although it is not very strong in appearance, LINK has a 3% potential due to the ETH shears and the $ 14.75 levels come to the fore. 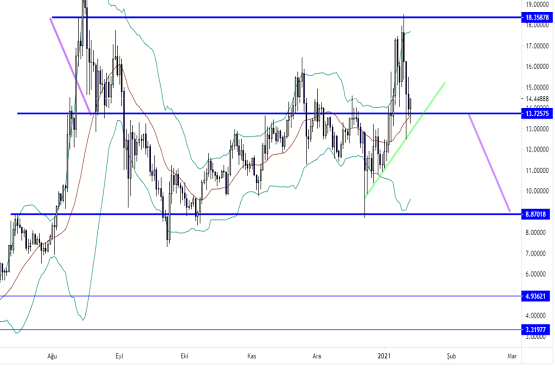 BAT / USD parity is priced around $ 0.23 this morning, up 1%. After the volatile state that showed a 10% price change on the previous day, it completed the day again at the level of $ 0.23 at the end of the day. The anxious state of the market and the macro view that supports the upward expectations on the other side creates an unstable atmosphere, causing the waters to remain stagnant in the pair. If it holds above $ 0.23, which corresponds to the Fibo'50 level, upward pricing may occur with the crypto money market that has started to recover. If the bearish position continues, the yield of the $ 0.20 support at the Fibo'23.60 level will be followed. 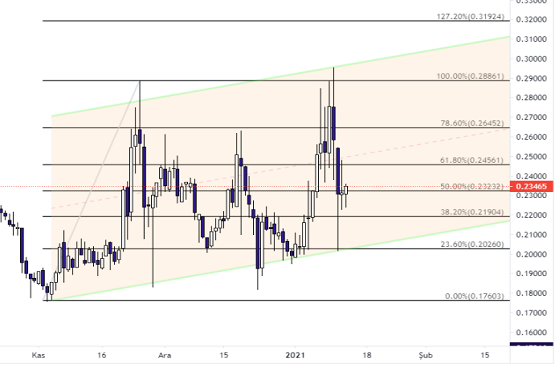