US Central Bank Governor Powell has commented that Bitcoin is "too volatile to be money" and is "more similar to gold than money". Stating Bitcoin is not a useful option as a store of value Powell has once again demonstrated his negative attitude towards Bitcoin.

A recent report published in India claims that the government is considering taking measures to block cryptocurrency exchanges. Although the government has recently stated that it will not completely ban cryptocurrencies, a restriction on exchanges may be more negative for users.

According to the digital asset manager Coinshares, the corporate demand in the US has declined slightly while the demand for European and Canadian funds is still high. After the strong Ethereum purchases in February, the most demand was on the Bitcoin side in March.

Scaramucci, a former white house employee, has said that more companies should have Bitcoin on their balance sheets due to the high increase in dollar supply. SkyBridge of which he is the founder, currently owns more than $600 million in Bitcoin.

New York based investment company, SkyBridge Capital has applied to the US Securities and Exchange Commission (SEC) to set up a Bitcoin investment fund (ETF). Thus, there are currently at least 5 Bitcoin ETF applications pending approval by the SEC.

With the political developments and the depreciation of the Turkish lira, Bitcoin searches made on google has shown a 566% increase in Turkey in the last 24 hours. As part of the fight against inflation, cryptocurrencies may be considered as a solution by the citizens.

Belfort Admits His Mistake about Bitcoin

The author of The Wolf of Wall Street, Jordan Belfort has admitted that he had misinterpreted Bitcoin in the past and added that he is predicting a goal of $100,000 for Bitcoin. In his previous statements, Belfort had stated that Bitcoin would collapse.

A large part of these sales were due to the stress of quarantine measures and Powell's speech at BIS yesterday about digital money and Bitcoin. Stating that there is almost no digital currency study except the cryptocurrencies, Powell stated that they did not even have a minute to lose last week in the BoJ digital currency movement meeting. Apart from these, there is an increase in the amount of BTC released from the exchanges for hiding. Bitcoin accounts continue to expand as well. We did not encounter any data that could disrupt the course of Bitcoin in a fundamental way and we did not see any data showing that it was overprimed, either.

When the Bitcoin/USD parity is technically analyzed, the descending peaks from the $61,800 level turned into a trend. It came to the zone of 52-53 thousand, which is the accumulation zone. Although there has not been a recovery yet, we have seen similar sales from the 60,000 zone and sales of up to 53,000. While there are no signs of recovery for now, the prices trying to react have a scrawny image. Yellen is expected to give a speech today, which is notable considering that he does not like cryptocurrencies and could make negative speeches similar to Powell. 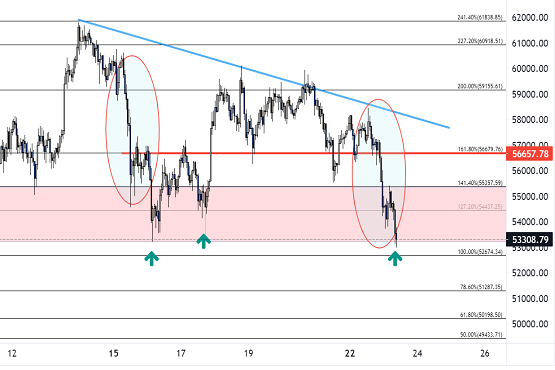 Ethereum is trading at $1,660 this morning with a loss of over 1%. We have been emphasizing the protest attack by the miners in the ERC20 network on April 1 for the last two weeks against their income, which will be affected by the EIP 1559 improvement. The attack, which will last for 51 hours, justifiably worries ETH investors. This situation has negatively affected ETH prices for the last two weeks. The amount of ETH locked in ETH 2.0 has broken a record again. The market sees an opportunity to lock in ETH buying on dips.

When the ETH/USD parity is technically analyzed, the OBO formation, which appeared in a four-hour and daily period, confirmed with the breaking of $1,740 and started to decline. While the $1540 zone pointed out by OBO indicates support where the uptrend has passed, the support zone of $1,580, where the Fibo'38.2 zone is past, may also work as support. Therefore, if the $1,650-1,670 zone is broken, moves towards the OBO target may be accelerated. The general overview is weak and with high sales. 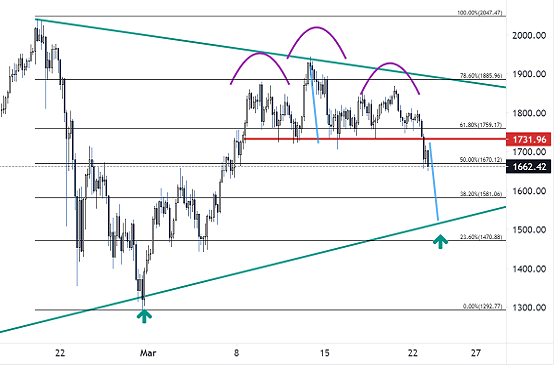 The AVAX/USD parity is priced at $28.60 in the morning with a daily retracement of 2.2% on a daily basis. AVAX, one of the PoS coins, announced today that Avalanche has reached 893 validators and 6312 delegates. Since the trust factor in PoS coins is directly proportional to the extent to which these numbers satisfy the user, we can argue that there may be an increase in confidence on the AVAX side and the demand will be positively affected. On the other hand, with Nash claiming to be the most secure wallet in the world, AVAX transfers will begin with a 1% fee (commission) as of the second quarter. This was one of what AVAX promised in its quarterly report. Seeing that these promises come true is an important factor for investors.

When the AVAX/USD parity is technically analyzed, the parity was preparing to respond yesterday from the $33.60 mid-channel zone, after dropping below $32.00, it was subjected to selling pressures and dropped to the $28.00 zone. $27.50 is the first support zone, but since the channel is at the lower band, purchases from here may intensify and move the parity higher. For pricing that is at a strong support point, oscillators also approve as they are located in the support zones. Initial resistance will be followed at $32.00. 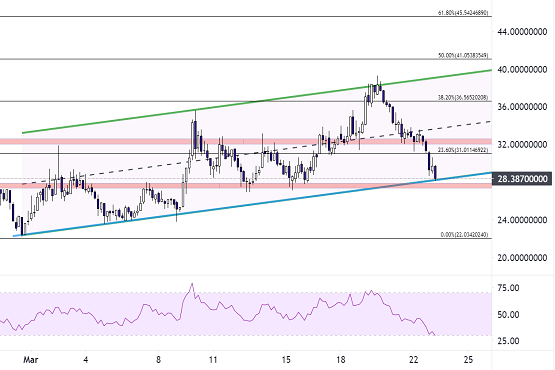 The XRP/USD parity is pricing at $0.55 with a weak 1% rise in the morning hours. Despite the slow market the previous day, it reached a daily increase of 17% and became one of the most positively differentiated coins of the day. Both reporting that XRP Ledger is a very suitable platform for Central Banks and a positive reading of the developments regarding the lawsuit with the SEC were among the factors supporting the rise for XRP. However, following the rhetoric of US Federal Reserve Governor Powell, the sell-out trend in the market also led to recession for XRP. Still, it is resisting well in the $0.54-$58 zone.

When the XRP/USD parity is technically analyzed, although the flag formation and the $0.64 target, which we confirmed with the upward breakout of the $0.52 zone, were delayed due to some factors in the macro part, testing the $0.60 level brought a 15% increase, enabling the formation to confirm the rise. In terms of outlook, the positive trend continues despite today's red market. We are in the mid-upper band of the horizontal channel in the current plane. While 0.5430, which corresponds to the Fibo'61.8 slice, is the support point, 0.6358 is the flag in the technical target and resistance position. 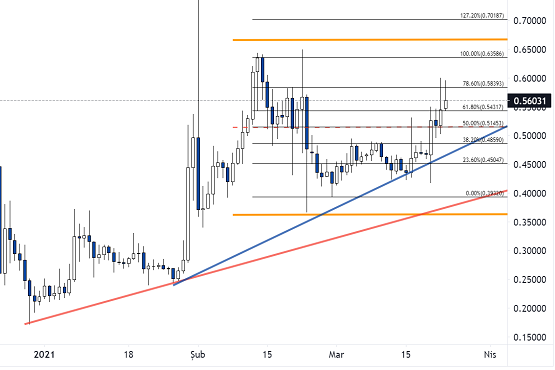 Litecoin is trading at $183 with a 1% retracement this morning. When looking at the chain data showing the average transfer amount, it is seen that there has been a general decline in the last 3 months and the average number of LTC transferred has decreased in March. Although we know that it has an institutional portfolio for Litecoin in Grayscale funds, the serious decrease in transfer volumes in March indicates that the demand in whale accounts is slightly away from Litecoin.

When the LTC/USD parity is technically analyzed, the BTC-led correction was also effective in Litecoin, and the parity retreated to $182, unable to hold on to the $190 support. The declining position of major and minor trends indicates a weakness for the parity, and selling pressures may persist unless prices above $196 and then $204 are seen. $178 is the first support zone for the parity. In the 4-hour period, oscillators are close to the bottom levels but do not give a return signal yet. Poor outlook could bring about a period of consolidation from $180 to $204. 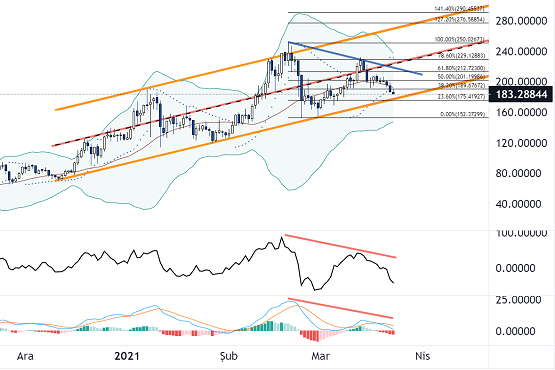 The LINK/USD parity is trading at $26.70, with a 2% retracement in the morning. According to data provided by Santiment, the number of new addresses created in the Chainlink network remained at its highest rate during the first three months of 2021. The amount of LINK in stock exchanges decreased to 14.6% of the total supply. This level was last seen in July 2019. High activity values ​​and limited supply in the Chainlink network are valuable indicators for price increases.

When the LINK/USD parity is technically analyzed, the rising lows keep the parity in an upward trend, but the pressure of the peaks from the $32.30 zone reflects that the pricing is in tightness. $27.00 is the uptrend support level. Although the oscillators on the daily chart are also close to their support, there has been no reaction yet. If the downside break of $27.00 materializes, we will follow the $24.60 Fibo'23.60 retracement as the support level. On the upside, selling pressures above $32.00 may decrease. 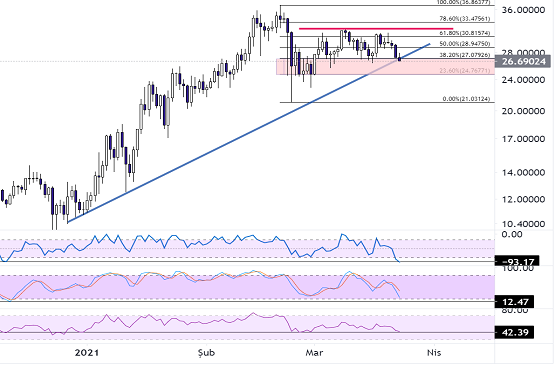 Basic Attention Token is retracing 4% this morning, with pricing at $1.04. The flag formation formed in the 4-hour period has not been confirmed yet, as the parity is pressured at $1.17 and is waiting for another reaction. The levels where it will find support for the anticipated reaction may be the $1.00 level, which is the mid-channel zone, and as long as the dips below are also within the flag boundaries, the probabilities for the rise are preserved. Although the general situation of the market has caused withdrawals for the Basic Attention Token for now, the last week's return is over 100%. Therefore, healthy retreats may serve as preparations for the increases. 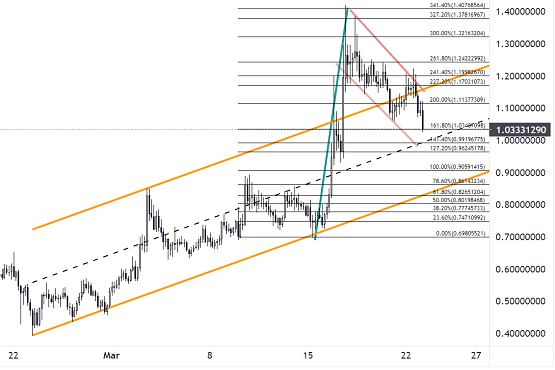