A preliminary hearing was held yesterday against charges filed by the SEC office for selling securities against Ripple. It was 16 August for both sides to collect the charges and evidence.

Yellen Re-References Cryptocurrencies
U.S. Treasury Secretary Yellen noted that Bitcoin and other cryptocurrencies are very speculative assets. In a statement, She warned investors not to invest in cryptocurrency assets. Following these statements, there was a sudden decline in the cryptocurrency market and a rapid recovery with it.

MoneyGram Has Stopped Partnering with Ripple

MoneyGram, the giant payment network, said in a statement that the use of Ripple's payment solution, ODL, has been suspended. MoneyGram, a money transfer company, was buying XRP from Ripple for the encouragement of XRP use every quarter in its deal with Ripple.

Bitcoin, the main currency of the crypto ecosystem with a 62% dominant, is trading below $ 50,000 this morning, down 7% from yesterday. It is 1now 5% below the record level of $ 58,400 it tested on Sunday. U.S. Treasury Secretary Yellen's statements again led to negative pricing in the community. But we've had this story three times before. We even hung below $ 30,000 with the rhetoric of the previous Yellen, then started a hard exit to $ 40,000 levels. Therefore, we think that prices will come out of this correction with the effect of Yellen's rhetoric and the closing of the scissors between the chain data and the price dispute that we have been talking about in our bulletins for some time.

When we consider the BTC/USD parity technically, we can say that the 15% figure consisting of the peak is correction. Because Bitcoin's 30-day volatility is 80% and it does not exhibit movements similar to many other financial ies. His last break was as far back yesterday as his triangular target in the range of 43,000-49,000. He is currently holding on to the $ 49,000 line he broke this triangle. This point is also a support point for the uptrend since January 28th. Support for $ 49,000, while levels of $ 46,300 and $ 47,200 are consolidation territory. The outlook is a little weak, trying to hold on. 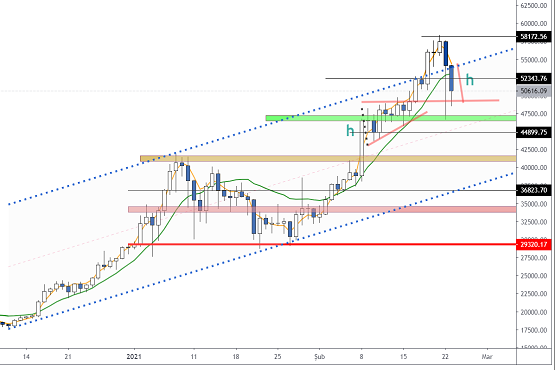 Ethereum is trading at a 10% loss this morning, just behind $ 1,600 with some weak image. At ETH, which is also 11% behind BTC performance in weekly returns, the amount staked for update 2.0 is at an all-time high of 3.2 million ETH (ATH). On the other hand, Ethereum network charges are still higher and have nearly doubled compared to yesterday. Therefore, the devaluation of ETH is now ahead of the market, negatively deseeding.

When we consider ETH/USD technically, prices that start to sag below the bull's channel are trying to recover. In cantitatif, prices are discounted. Over the four-hour period, the oscillators have been oversold. Prices that had previously hung at $ 900 quickly recovered, breaking $ 1,350 in the soaring triangular formation. After completing the $ 2050 triangular target, ETH is still 15% higher in the monthly period, with consolidation of $ 1500 and major support of $ 1350. Currently at $ 1580, ETH has held on and reacts with approval from the $ 1500 zone. 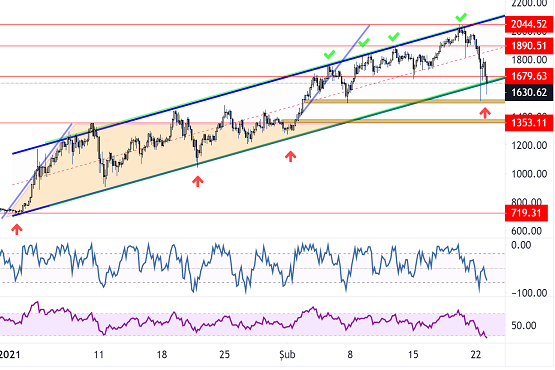 The AVAX/USD parity is priced at $ 27.00 this morning with a 13% pull back. The downward channel that began after the $ 60.00 record on February 10 is not over, but rather the weak outlook continues as the hills gradually descend. The horizontality between Fibo'61.80 and Fibo'38.20 levels was negatively impaired by falling below $ 32.00. Avax supply, which will increase in the market with the unlocking on March 9, causes AVAX to be priced negatively in the basic part. Weekly returns remain negative by 20%. The initial support of the parity is at $ 25.00. The ossillators are also close to the support areas, but the end directions are below. This may indicate that the pull back in prices may take some time. This short-term outlook is far from a problem for value investors because in the long run AVAX is a cryptocurrency with high potential. However, the outlook for the short-term process is weak until March 9th. 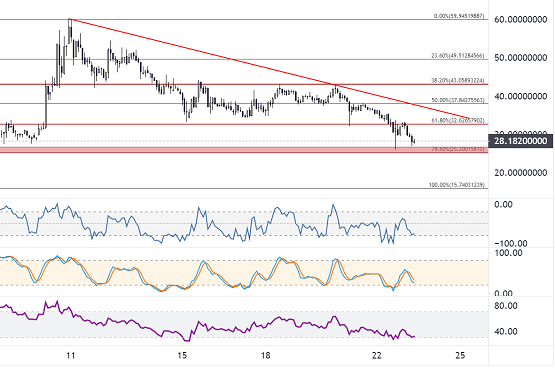 XRP is among the best coins in terms of performance, despite Ripple's lawsuit yesterday and the Yellen statements that shook the entire crypto ecosystem. Priced around $ 0.5220 with a 7% pull back this morning, XRP managed to hold on to over $ 0.50 despite some sagging. Now, let's get to the case. What was mentioned in our Ripple special post on sunday's ICRYPEX YouTube account, which was also shared by foreign agencies all over the world, was the investor's handbook. Unlike many news websites, the judge's decision yesterday to begin the trial and the decision to complete the evidence by August 16th coincides with Ripple's request. Ripple doesn't want to agree on this, he wants to solve it definitively and forever by winning the case. It can be argued yesterday that the SEC's arguments remain softer than Ripple's arguments. XRP still hides the risks it poses to this process, but we think that incorrect pricing in XRP may react upwards and go into correction during the litigation process, which we consider more prone in favor of Ripple.

When we consider the XRP/USD parity technically, a horizontal image prevails even if it dangles its trends downwards in its rises. Most importantly, it held on to $ 0.50 levels. If it goes below $ 0.50 in XRP/USD, where there is no trend, it could give a large binary peak appearance. For now, the cruising we follow horizontally has a horizontal image between the levels of $ 0.50-$ 0.63. With the stop loss that follows the withdrawals, a horizontal processing strategy can be created within this channel and in a narrower band. 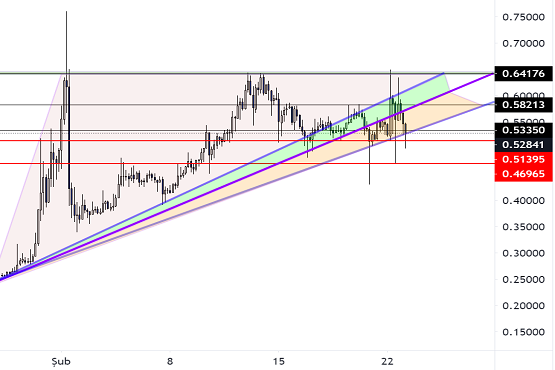 LTC/USD parity is priced at $ 186 this morning with a negative price movement of 10%. The amount of transfers calculated with a seven-day moving average on Litecoin is at its highest level in three years. At the same time, the addresses on the receiving end are at their highest level in three years. Although Yellen's statements the previous day caused an overall decline in the cryptocurrency world, the lack of such a high transfer amount for 3 years may have showed that the sales pressures experienced were voluminous. Grayscale purchases, on the other hand, continue. More than 10,000 Litecoins were added to Grayscale assets during the 24-hour exchange.

When the LTC/USD parity was technically examined, the OBO (Shoulder Head) formation, which we mentioned in our previous bulletins, completed its goal by testing the $ 195 level of parity. Although the $ 195 level was reacted to, it was not strong, and thus the major uptrend was also broken downwards. The first support zone for pricing below the $ 195 level is at $ 180. 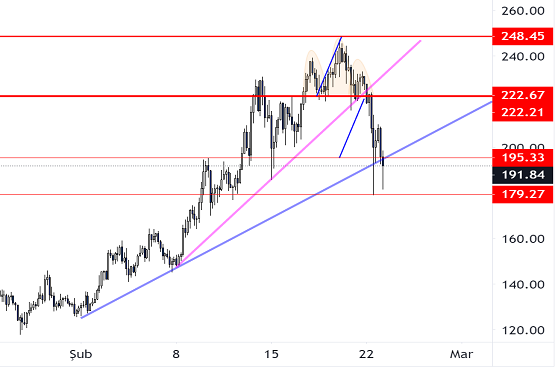 The LINK/USD parity is priced at $ 27.50, with a 12% pull back. Following Yellen's statements, LINK pricing sagging by 20% and trading below $ 25.00. We can say that this decrease, albeit for a short time, is creating a negative perception for LINK investors, causing sales to continue this morning. However, since LINK has been the return leader of the last two years, it will continue to be attracted by value investors who invest in long-term expectations. We anticipate that this loss will be compensated in a short time. When the on chain data is examined, it is seen that the amount of LINKS transferred to the exchanges decreases and links are transferred to anonymous wallets from the exchanges.

When the LINK/USD parity is technically examined, pricing that cannot hold on to the $ 31.00 channel sub-band is weakened by staying below this level. It is noteable that the ascension channel, which has remained virtually intact when slight sagging has been neglected for nearly two months, has broken downwards since yesterday. The $ 32.00 pullback point can return to parity if this level doesn't break upwards. If broken, positive pricing may come back into the agenda within the boundaries of the ascension channel. Oscillators are close to the overstoring zone, so the reaction time may be close. 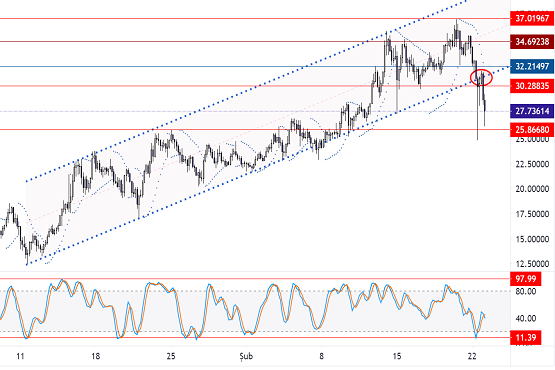 BAT/USD Fibo'23.60 supported at 0.5160, but the previous day was one of the least lost coins in the sudden decline across the cryptocurrency market. Overall market trends are downwards, so BAT has also been affected by the general weather, retreating to $ 0.45 with strong sales. This level is also the sub-region of the flag formation and the $ 0.61 zone must be broken upwards for the formation to give its approval. That's a 35% rise. If it can hold on to the region of 0.40 in the current situation, movement up to the region of $ 0.58 can be seen. However, the $ 0.58 level must be broken for the confirmation to arrive and the flag to form. The ossillators are close to the support areas, but not yet on them, or have not turned their direction upwards. That's why he's not giving the preliminary signs that they can react. 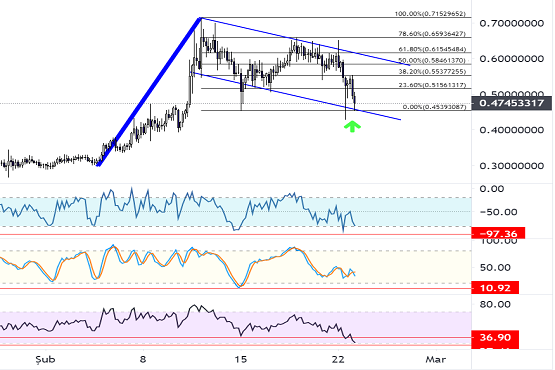