The data shows that the ProShares Bitcoin ETF has reached a significant level of asset-under-management (AUM) and breathes new life into the CME in the process. The ProShares BITO ETF hit an all-time high of 26.7k BTC for AUM this week, according to the latest weekly report from Arcane Research.

Ethereum Whales Now Hold Over $2 Billion Worth Of Shiba Inu

The top 1000 largest whales by assets held on the Ethereum network are increasing their investments in the meme cryptocurrency Shiba Inu and currently hold over $2 billion worth of it.

Bitcoin led a market-wide sell-off by losing almost 8% coming into business hours Friday Asia time, and was trading at US$40,578 at press time.

President Biden's executive order, which directs agencies to develop a comprehensive strategy to regulate cryptocurrencies and other digital assets and scrutinize a digital dollar, could be issued next week, according to Yahoo.

21Shares, the issuer of products (ETPs) traded on the Swiss-based cryptocurrency exchange, announced the listing of new digital asset-focused ETPs on Euronext exchanges in Paris and Amsterdam: Decentraland and AAVE.

Bitcoin is now legal in Ukraine as parliament passed a bill in the final reading that meets the president's recommendations. However, the country has not yet made Bitcoin a legal tender.

Polkadot Electricity Consumption Is Less Than Solana, Bitcoin and Ethereum

Based on the results from CCRI research, Polkadot, the strong competitor of Ethereum, emerged as the network with the least electricity consumption compared with Ethereum, Solana, Bitcoin, and other top cryptocurrencies. This indicates that Polkadot affects environmental and climatic changes and pollution less than other networks.

Bitcoin gained a 0,50 % value during morning hours and is priced around $40.769. Bitcoin is now legal in Ukraine as parliament passed a bill in the final reading that meets the president's recommendations. However, the country has not yet made Bitcoin a legal tender.

When we consider the BTC/USDT pair technically, BTC faced a reaction from the $45,000 resistance level, which coincides with the December 2021 dip level, and broke the 50MA level downwards, closed the day below. As we mentioned in the daily newsletter yesterday, the negative divergence in the daily RSI was confirmed and BTC, which could not break its resistance, continues to drop with the negative impact of Russia on the markets. 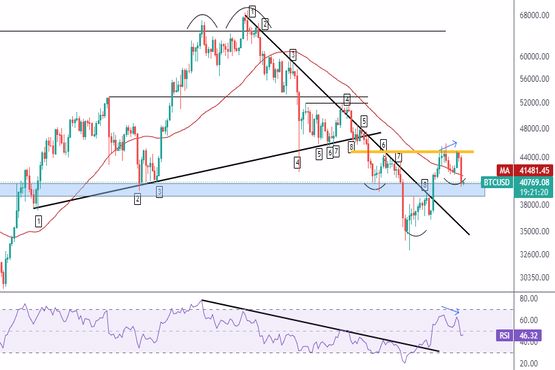 Ethereum gained a 0,25% value during morning hours and is priced around $2898. When we consider the ETH/USDT pair technically, ETH broke the short-term minor trend upwards and continued its rising towards the major downtrend. For ETH, which tested this trend last week, the breakout of the trend could not persist. Ether recently broke the 50MA level and downtrend with the above-average daily volume. But Russia's tension led Ethereum to break those levels downwards. If the blue-marked support zone loses its upward momentum, a pullback towards the $2600 level might follow. 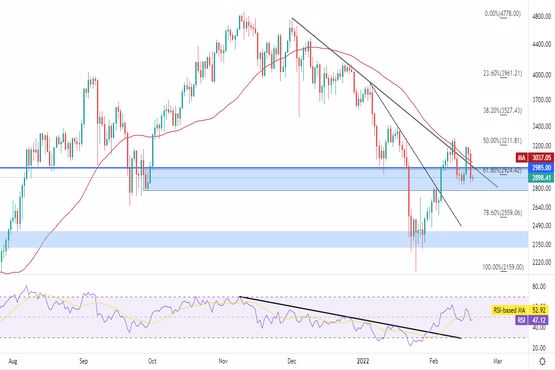 AVAX gained a 0,75% value during morning hours and is priced around $89,43. When we consider the AVAX/USDT pair technically, AVAX, which tested its major long-term downtrend several times, broke the 50MA level ($84,15) and major downtrend with an above trading volume and closed the day. Thus AVAX, which started the day with a positive divergence compared to the market, surged towards the $100 level, as we mentioned in the daily bulletin yesterday. In AVAX, which has received a reaction from the resistance zone marked in blue for the past 2 days, as we mentioned yesterday, a breakout did not occur, but a pullback. The 50MA level ($83,64) should be followed. 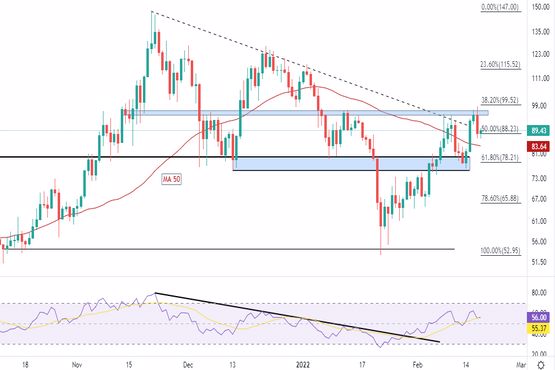 Ripple gained a 2,30% value during morning hours and is priced around $0,7879. When we consider the XRP/USDT pair technically, XRP broke the downtrend and 50MA level upwards, had experienced a sharp rally towards the 200MA level and still is priced above the 50MA. If the support at the 50MA and $0.7121 level is broken to the downside, a pullback towards $0.63 might follow. 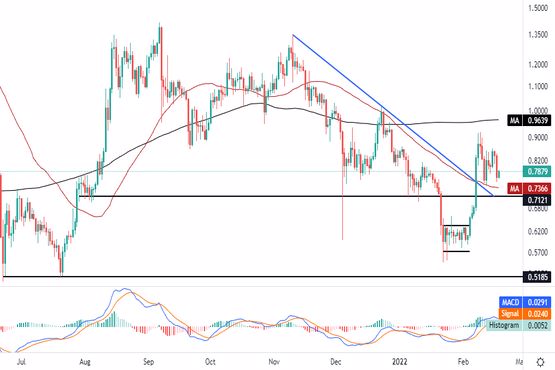 LTC gained a 0,60% value during morning hours and is priced around $117,0. When we consider the LTC/USDT pair technically, there is no major change in the outlook. After facing resistance from $145, LTC lost the level of $129,8 (50MA level) on Friday. If the downtrend in the majors continues its downward actions, the next $113,1 level should be followed. 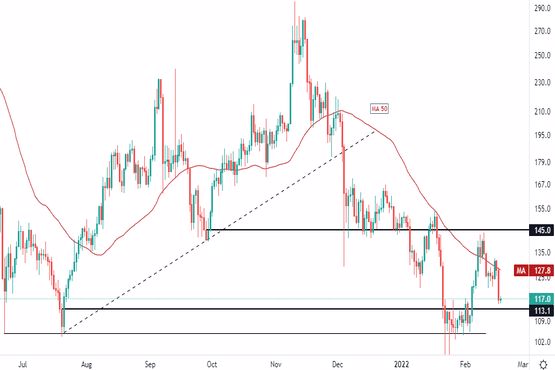 LINK gained a 1,60% value during morning hours and is priced around $15.85. When we consider the LINK/USDT pair technically, LINK continues price action inside the ascending channel in the 4-hour chart. During the price action below $15, LINK received a bullish signal with the formation of a positive divergence in the RSI, and faced a reaction from the $17 level, which corresponds to the middle band of the channel. Having faced resistance from this zone for the last two days, LINK retreated to the lower line. LINK has not a permanent rise, but could slightly rise this morning after finding support. If the lower line of the channel is broken downwards, the fall might deepen. 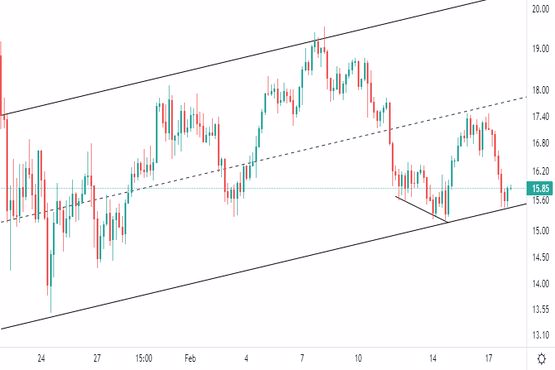 BAT gained a 1,53% value during morning hours and is priced around $0,7746. BAT often tested the strong uptrend on June 2021 and broke it downwards last week. Its price action below the trend continues. The drop may continue to the demand zone marked in blue for BAT, which has a short-term head-and-shoulders formation. 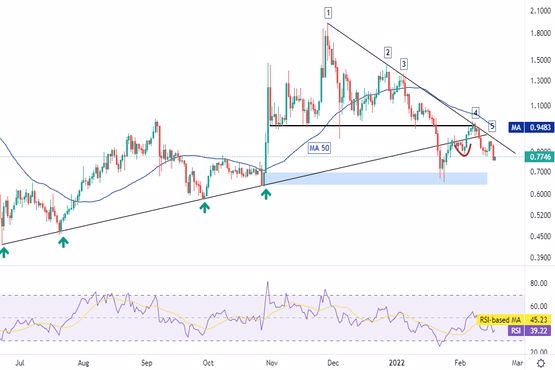