Recommendations for Cryptocurrency Regulation from Basel Committee on Banking Supervision

The Basel Committee on Banking Supervision has classified Bitcoin as a high-risk asset, while recommending that banks holding cryptocurrencies require capital adequacy and treating stablecoins as assets like stocks and bonds.

India May Soon Classify Bitcoin as a Regulated "Asset"

This morning, local newspaper New Indian Express reported that lawmakers in India have been asked to classify Bitcoin as an “asset” by the Securities and Exchange Board of India (SEBI).

Hardware wallet maker Ledger has completed its $380 million funding round. The company of the famous fund manager Dan Tapiero became the company that made the largest investment in funding.

While Hong Kong's monetary policy regulator sets out its new strategy to promote FinTech development, it will ensure that new financial technologies are adopted by all banks and financial institutions in the next four years.

CBDC Experiment from the Central Banks of France and Switzerland

While the Central Banks of France and Switzerland announced that they will conduct an experiment involving the use of digital central bank coins with a group of private institutions, the potential to provide maximum security and efficiency in financial transactions was emphasized.

SEC Warns Investors of Risks for the Second Time

While the SEC has warned investors who will trade in Bitcoin futures funds, for the second time, about the risks, at the end of the note, a highly speculative warning was given for these transactions.

The American bank State Street, which controls a total of $ 40 trillion in assets, is preparing to establish a cryptocurrency team as a result of the demand from customers.

IMF; He stated that El Salvador's acceptance of Bitcoin as legal money will bring many problems in terms of macroeconomic, financial and legal aspects.

Central Bank of Nigeria May Introduce CBDC by Year End

Criminals Arrested in China Through Cryptocurrency

In China, 1100 suspects involved in crimes such as money laundering and fraud through cryptocurrencies were arrested in an operation.

Green Light for Cryptocurrency Custody Service from Texas to Banks

The state of Texas has given the green light for state banks to provide crypto custody services to their customers if they meet the specified conditions.

BTC Interest Rates Drop in China Due to Restrictions

After the social media platforms in China to ban accounts related to cryptocurrencies and the government's stance on mining, there was a decline in Bitcoin interest rates.

Bitcoin is trading with a horizontal change close to 37 thousand levels this morning. After El Salvador adopted BTC as the official currency, senators in Paraguay and Mexico supported this decision, while India reported that it could classify BTC as an asset. With all these effects, the positive news from the front, where we have been receiving bad news for a while, brought BTC closer to 40 thousand dollars again. In addition, US inflation figures are also preparing the ground for possible changes in interest rates in the upcoming period, while the fact that they are not on the agenda in the near future maintains the demand for risky assets. The number of active addresses has increased by 35% in the last 24 hours. In addition to the good news flow for BTC, we can say that the number of wallets that reactivate at low price levels is positive.

When we consider BTC/USDT technically, the wedge formation on the daily indicates an upside break and a reaction movement. In the near period, prices above $35,500, which is the middle band of the horizontal channel in the 30 and 40 thousand range, and prices above the Fibo'23.6 slice ($36,900) show that it has found support in this region. For this reason, attempts can be made for a test above 40 thousand in BTC, which is close to the support zones, and if it falls below 32 thousand, a stop loss strategy can be considered. 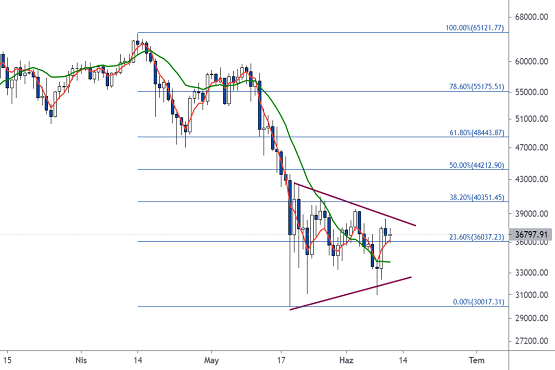 Ethereum is priced at $ 2443 with a decrease of 1 percent in the morning hours. When we examine the chain data, there are increases as of yesterday, although not to a large extent, after the decrease in the number of active and new addresses. In addition, according to chain data, there was an ETH net outflow of $ 28 million from exchanges yesterday. Investors' interest in Ethereum is slowly increasing and the exchange is not holding ETH in their wallets to sell any time soon. Testnets, which will also be published before the upcoming London hard fork on July 31, may excite ETH investors.

When we consider the ETH/USDT parity technically, we see that the descending trend, which started on May 12, tested above, but it could not be sustained and the squeeze in the ascending triangle continues. With the upside break of the $2465 band, which corresponds to the Fibo'38.20 retracement level, and the $2485 band, which corresponds to the downtrend, the price action can accelerate towards the $2749 levels, but if the price falls below the support levels of the 2425 - $2435 band, it is $2153. levels may continue. For this reason, we think it would be appropriate to wait for support or resistance breakdowns for new purchases in Ethereum. 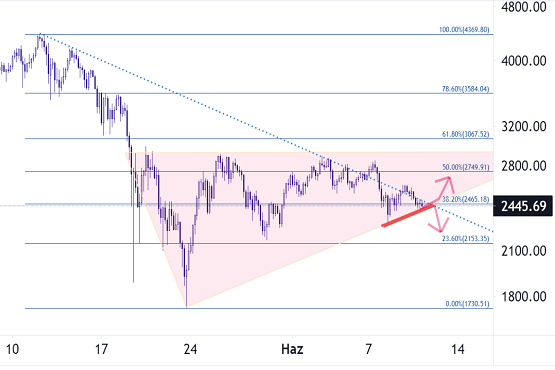 AVAX, which fell by 1 percent in the morning hours, is priced at $14.05. Technically speaking, the AVAX/USDT pair continues to move just above the support at $13.68. When we examine the MACD, we see that the histograms turn green and the fast average cuts the slow average upwards and gives a buy signal. This support at $13.68 is an important level since it has been tested several times before but has not been broken, and as long as there is no break below it, buy from areas close to the support level and short-term buy-sell from the price movement of about 10% up to the minor descending trend. strategy, or new purchases can be made by breaking the minor descending trend. 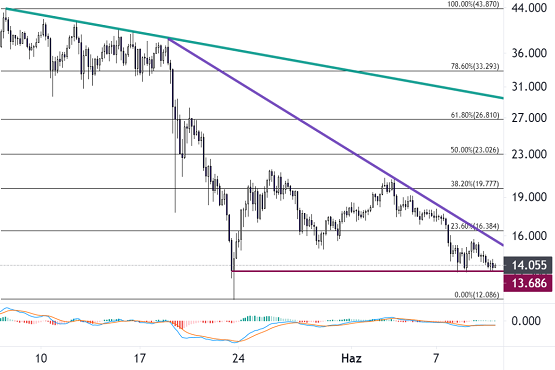 Ripple, which is flat in the morning hours, is priced at $ 0.86. Previously, the SEC specifically sought privacy on certain issues, rather than making all of its documents in the case public. In response to this letter written by Ripple, it was stated that confidentiality is important in various documents subject to the case in order to protect both parties. Judge Netburn responded positively to this request from both Ripple and the SEC. Although there is no update yet for the post-June 10 date in the future dates shared by Attorney James K. Filan, Ripple recently requested a deadline for the documents to be given to the SEC. There has been no response to this request yet, and at this point, we think that the response of the judge is critical.

When we examine the XRP/USDT parity technically, the price movement continues within the ascending channel that started on May 23. When we examine XRP, which is priced just below the resistance at $ 0.88, in the 4-hour period, we see that the stochastic gives a sell signal, while there are slight recoveries in the RSI. If the resistance at $ 0.88 is broken to the upside, the next resistance and also the levels of $ 0.995, which coincide with the channel there band, are targeted. If the resistance cannot be retested and broken, we expect it to find support by retesting the lower channel of 0.79 dollars with the increase in selling pressure. 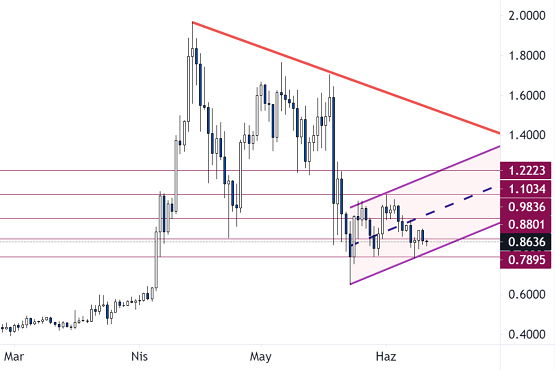 When we look at LTC/USDT technically, we see that it broke the resistance level at $168.39 yesterday again. We are skeptical of this rise as there is not enough trading volume to support the breakout. In the 4-hour period, the RSI is near the resistance level of 52.6. However, although we see that the stochastic gives a buy signal, we characterize this signal as weak as it is close to the overbought region. As long as there is no 4-hour close below $168.39, we expect upwards towards $194. 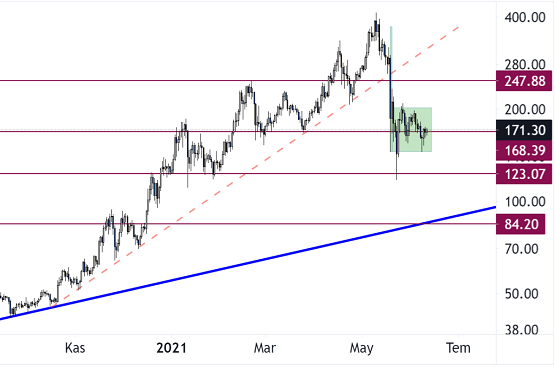 Moving sideways in the morning hours, LINK is priced at $23.05. When we examine the chain data of Chainlink, we see that the number of active and new addresses has decreased in recent days, in other words, the interest of investors in LINK is weak. However, in general terms, if this loss of interest in the market recovers after a while, we can say that coins with high discounts can move faster just like LINK.

When we consider the LINK/USDT parity technically, it is priced below its main rising trend in the morning. When we examine the 4-hour chart, we consider these levels as support while LINK moves towards the $21.00 levels, which coincides with the Bollinger lower band. A short-term buy-sell strategy would be appropriate for around 10% reactions from the $21.00 to the $23.00 levels. On the other hand, for LINK, which needs to break the $23.60-23.70 band upwards in order to return to its main trend, new purchases can be made with the upward break of this band. 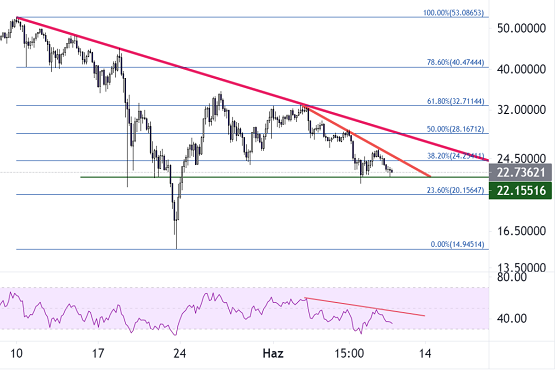 BAT is priced around $0.655, depreciating by about 1.6 percent this morning. When we consider the BAT/USDT parity technically, there is a symmetrical triangle formation in BAT, which continues the price movement between the Bollinger lower and middle band in the daily period. The daily MACD for BAT, which coincides with the Fibo'38.20 tranche and is also priced below the $0.711 resistance zone near the Bollinger middle band, has lost its upside momentum, although it retains the buy daily MACD signal. If it closes daily above the critical resistance level at $ 0.711, we think it will gain momentum again and move towards the Bollinger upper band of $ 0.90. 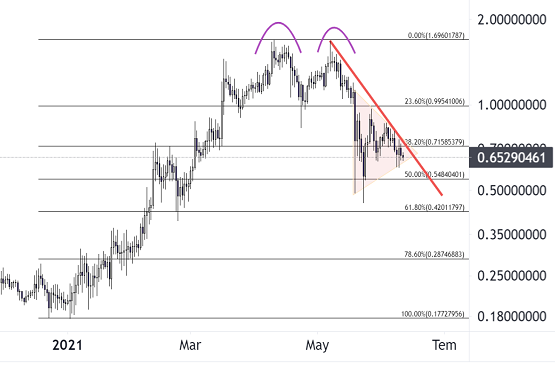