Chicago Mercantile Exchange Bitcoin futures reached their highest level of $ 20,300. BTC spot price approached $ 20k levels. Subsequently, a retreat of $ 1,000 was observed. Bitcoin has gained 160% this year due to additional incentives, demand for assets perceived as inflation-resistant, and expectations of general acceptance of cryptocurrencies. After testing the historical peaks yesterday, it fell again below $ 19 thousand with the profit realizations.

Information technology giant Larsen & Toubro, working in the field of digital solutions, has joined forces to launch a digital banking platform in Northern Europe, powered by RippleNet member Temenos. It will allow banks and other financial institutions to transact on a larger scale and at lower prices.

Bitcoin can be earned with Visa Card Spending

Crypto financial services provider BlockFi is launching a Visa credit card in the US in the first months of next year. BlockFi will offer a fixed 1.5% reward in Bitcoin for each transaction made with the card. It will also provide a $ 250 bonus in BTC for spending $ 3,000 on the card in the first three months. The annual fee for the card will be $ 200.

The scalability and security upgrade of Ethereum, the second largest crypto currency in terms of market volume, was not delayed this time, and finally took place today, on the date it was planned. Beacon Chain with Turkey last 15 hours started at 00.

While Facebook introduced the name of the crypto money project Libra, which was introduced last year, with the word "Diem", which means "day" in Latin, this stablecoin project is expected to be available in January 2021.

One-fifth of PayPal Users Bought Bitcoin
Mizuho Securities reported that around a fifth of PayPal users bought Bitcoin, along with its research. It determined that 65% of users will use Bitcoin as a currency at 28 million merchants integrated with PayPal, and 17% will trade Bitcoin using the app.

Bitcoin is trading at $ 18,600 this morning, down a slight 0.5%. Demands of institutions continued after the last 20 thousand $ attack. In addition to the news that 20% of PayPal users bought Bitcoin, BlackRock CEO also drew attention to Bitcoin. In addition to the purchases of institutions, the amount held in HODL (long-term holding) fell to a 5-month low. For this reason, FOMO, i.e. investors who are afraid of missing the opportunity, may receive an additional individual demand in case of re-purchases against a new Bitcoin movement. After institutional purchases and widespread use of Bitcoin, we can easily say that the prices receive a certain level of support in the coming days.

When we consider BTC / USD technically, the minor trend is broken and the BTC price, which is pulled to 18,400, which corresponds to the Fibo'61.8 level in corrections, is in the major support range of $ 18,000-18,400. For this reason, as long as there is no sagging below 18 thousand in the retractions, the reaction purchases can continue and we can watch movements towards the intermediate resistance 19,200. Although it has created a short-term descending slope since the last record high, we cannot say for now that it has turned into a trend. With the increasing volatility in the last two days, the 30-day VOL has increased to 57%. Therefore, instead of the usual short distances, it is useful to put a little more distance between the currently determined levels. 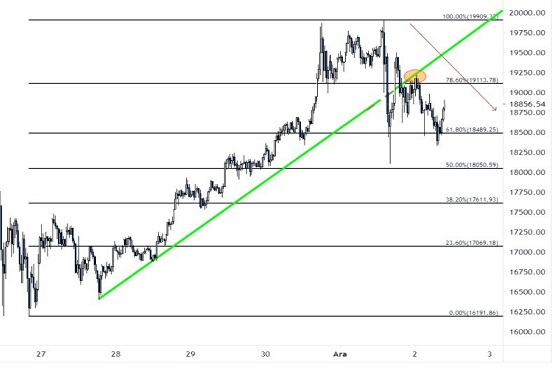 The Ethereum 2.0 process started on December 1 as a result of the Genesis Block's production and approval. With the start of phase 0, a new phase has been entered. Moved from the Proof of Work model to the Proof of Stake model. Yesterday, as the ICRYPEX family, we witnessed this historic transition moment with our live broadcast from 15:00 on our youtube account. The replay of the broadcast is on our youtube account. The amount of ETH, which was active in Ethereum in the last 1 and 2 years, fell to the lowest level in 1 year. This may be a preliminary signal that users are switching to long-term ETH investments.

Although ETH / USD displayed volatile movements around 15:00 yesterday, the transition time, this volatility was not exclusive to Ethereum. With this activity seen in the entire market, ETH / USD fell from $ 620 to $ 560. In order to disrupt the double peak outlook in the $ 620 region, the current $ 620 resistance level must be broken, when this point is broken, there is no significant resistance until the $ 690-720 zone. However, it is useful to be cautious; momentum and MACD confirm double peak weakness. For this reason, response confirmation from support may be a prudent strategy in withdrawals. 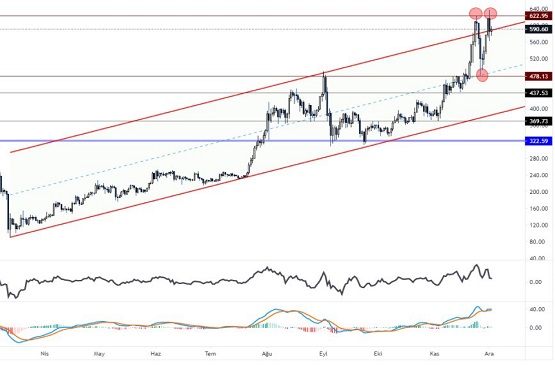 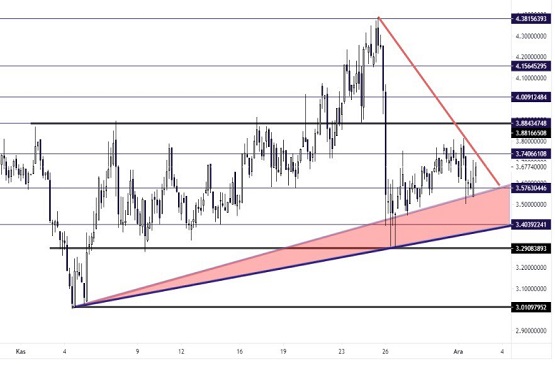 Ripple is trading around $ 0.60 this morning, down 2%. The cryptocurrency exchange changed its mind yesterday after Kraken signaled that it is not planning to support an airdrop of upcoming Spark tokens on Monday. Flare Networks, a smart contract tool funded by Ripple, will be distributed 1: 1 of more than 45 billion Spark (FLR) tokens to XRP on 12 December. It is expected to contribute positively to Ripple. Co-founder Jed McCaleb, who left Ripple years ago, has spurred Ripple sales due to huge spikes in volume. If McCaleb continues its sales at this pace, it will have consumed all of its Ripple in 1 year. Recently, rising prices have expanded the user base. As the Research Unit, Ripple's addition to the cryptocurrencies supported by PayPal increased our expectations.

When we consider XRP / USD technically, we can say that it is useful to examine the four-hour charts. XRP / USD, which broke the uptrend downward, relaxed from the 0.69 zone to the 0.57 zone. While the outlook is for recovery appetite for now, movements are weak. 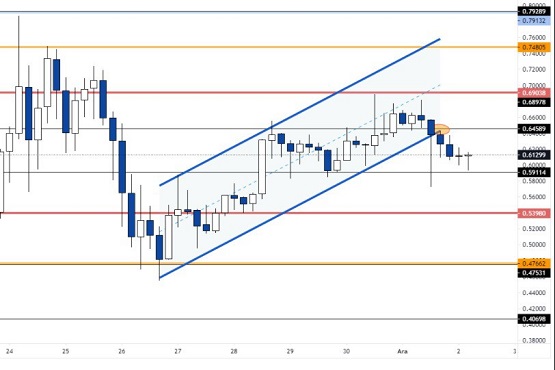 In LTC / USD, it managed to continue its rise to the 90.20s level by overtaking the $ 85 level, which was the critical resistance in yesterday's trading, with a strong buy. The appetite for recovery is weak for now, although retractions are observed to near $ 82 after profit sales. Nevertheless, the strong pre-sales pressure dynamics according to market criteria may support these reactions. The $ 90.20 level is the upper resistance and $ 95 could be considered if it manages to break above it during the day. In possible withdrawals, the reaction from daily supports to $ 80 levels can be observed. In LTC / USD, where the double bottom formation continues, the end of the blue zone, which is the target zone, and our presence in this zone may support the buying reactions. 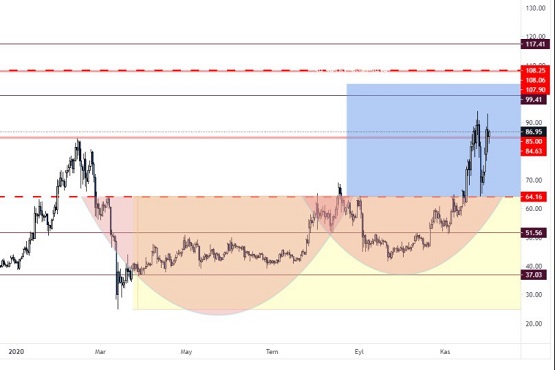 LINK is trading near $ 13 this morning, down around 1% from yesterday's trading. It officially started with the completion of the Ethereum 2.0 genesis block. It is also expected to contribute positively to Chainlink and DeFi projects using the Ethereum network. Although profit sales are encountered in the morning hours at prices rising with anticipation, it may also cause buying pressure again with the increase of fluctuations in the market.

Technically, Chainlink has continued its movements within the bullish channel since late September yesterday, with profit sales coming in, with a retreat from $ 14.80 to $ 13. Trying to react inside the bullish channel, LINK / USD is trading between the middle band of the channel and the upper resistance band at $ 13.20 and the upper resistance band of the channel at $ 15.20. If it holds on to the 13.20 level where the middle band passes, we can watch the reactions up to the level of 14.20 at the beginning and $ 15.20 where the upper band passes. 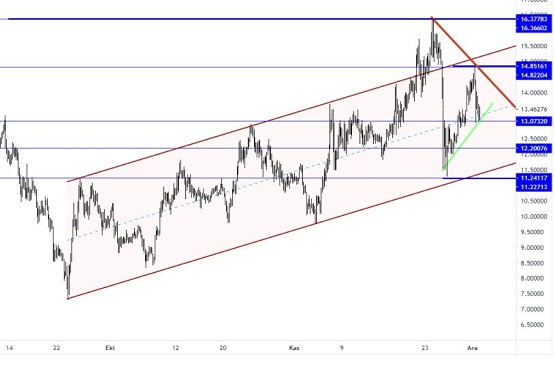 BAT / USD has lost 5% from yesterday to today and is traded near $ 0.2300. According to Glassnode data, BAT average transfer volume transferred between wallet exchanges has increased by up to 50% in the past day. Although there were withdrawals in the crypto money markets with the profit realizations seen with yesterday's increases, it started to recover again. It is trading between $ 0.2270 and $ 0.2580 with the breakdown of the minor uptrend. 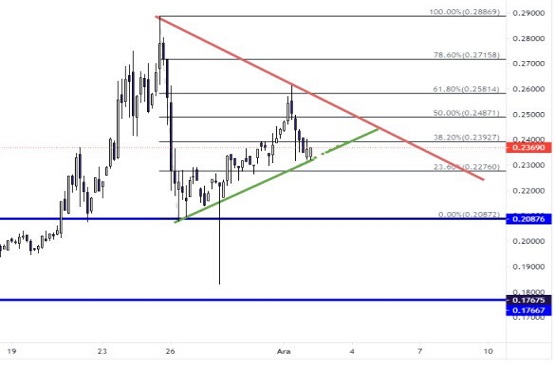