In collaboration with institutional payments firm NCR and digital asset management firm NYDIG, approximately 650 banks and credit unions will be able to offer cryptocurrency services to their customers through mobile apps.

US Senator Says Crypto Assets Should Be In Retirement Portfolios

U.S. Senator Cynthia Lummis said in an interview that Bitcoin and other cryptocurrencies should be part of their retirement portfolio as they are a good "store of value".

HSBC has become the fourth founding member and the first overseas institution to do so in the UAE's know your customer (KYC) blockchain platform.

While 12 banks are determined to take part in the test study for the digital currency of the Central Bank of Russia, it is planned that the prototype will reach December and test work will begin in January 2022.

Regulatory Statement from the President of the Bank of France

The Governor of the Bank of France, Galhau, stated that they do not have much time on cryptocurrency regulations and that failure to act will put their monetary sovereignty at risk.

Ripple will be responsible for overseeing strategy, including the expansion of RippleNet, while hiring Mastercard executive Sendi Young as general manager of European operations.

Valkyrie Funds, which applied to the SEC to create a Bitcoin ETF, announced that it received an investment of $ 10 million.

US-based firm Point72, which manages $22.1 billion worth of assets, is looking for a "Crypto Manager".

Cooper Will Be Responsible for the Security of Assets on Algorand

UK-based cryptocurrency custodian Copper has been appointed to secure assets on the Algorand blockchain.

Bitcoin, which fell by 2.22 percent in the morning hours, is priced at $ 34,267. When we analyze the chain data of Bitcoin, which made the monthly closing of June at $ 35,060, we interpret positively that there was $ 96 million worth of BTC outflows from the stock markets yesterday. On the other hand, it is possible to say that there is a decrease in the number of new addresses on the 7-day average, and that it actually had a relatively difficult time attracting new investors compared to the average of last week. Although the continuation of the increase in the number of active addresses is positive, the continuation of Tether outflows from the exchanges also reduces the pressure on pricing.

When we consider the BTC/USDT parity technically, we see that it has returned to its downward trend, which has been continuing since May 10. In terms of the continuity of the upward movement of the price, it is critical to maintain above the $35,000-35,100 band, which coincides with the descending trend. If the price continues to pull back, the $33,950 levels, which coincide with the two-week DEMA, could act as support. MACD maintains its signal to buy in an uptrend. In the short term, buying near support and selling near resistance will be healthier. 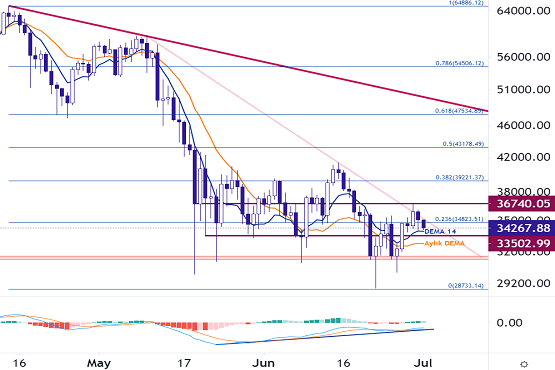 Ethereum is priced at $2198, depreciating by 3.5 percent in the morning hours. When we look at the chain data for ETH, the last 7-day average of the net flow to the exchanges, which has been at positive levels for a long time, has now declined to negative levels. This metric shows that investors are transferring from exchanges to wallets. At the same time, when we look at the amount of ETH locked in smart contracts, it is very close to the peak level with 23.63 percent. These two metrics greatly limit the supply of ETH on exchanges, reducing the selling pressure on ETH. The long-term ETH outlook is positive.

When we look at the ETH/USDT parity technically, ETH, which broke the major descending trend that existed as of May 12, the peak level of $ 3484, recently retested this trend from $ 2140. Retest was followed by rising volume price movements. When we examined it in the 4-hour period, ETH, which reacted from the resistance level at $ 2278, returned from the stochastic oversold zone and crossed downwards, giving a sell signal. For ETH, we expect to see support at $2145 on pullbacks and a break above the resistance at $2278 to see higher gains towards the $2500 levels. 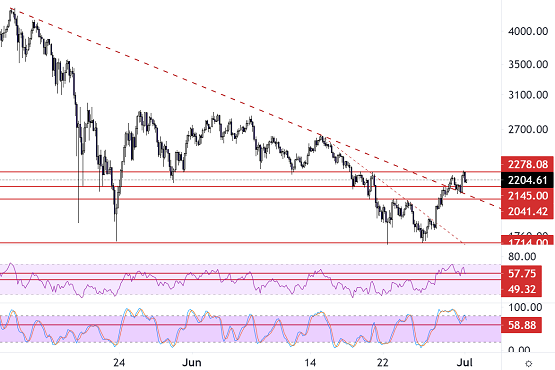 AVAX is priced at $11.67 with an approximate 2.2 percent depreciation in the morning. As of May 20, AVAX, which broke the current downward trend at $11.60, yesterday, is now retesting this trend. Since the trading volume during the breakout is below the average, there is no clear trend breakout, but if the retest is successful and persistence above this level, a rise towards the Fibo'50 tranche of $12.94 can be expected. For AVAX, which has a horizontal market view, the strategy of buying close to the supports and selling close to the resistances is seen as suitable for now. 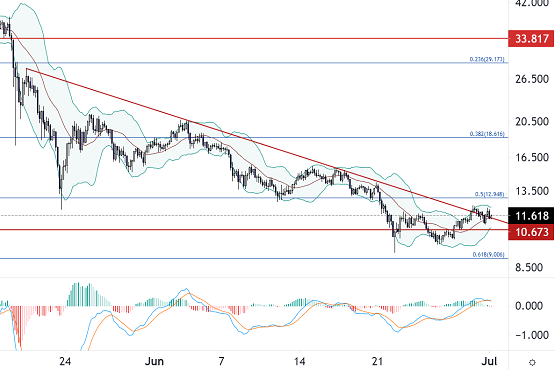 Ripple, which lost 2.89 percent in the morning hours, is priced at $ 0.687. An expected development in the Ripple and SEC case today will be a counter letter to be written by Ripple to the SEC's objection. After the letter, Judge Netburn will be expected to make a decision on whether to testify from the former SEC employee.

When we look at the XRP/USDT parity technically, XRP, which is holding above the weekly average, has recently broken the downward trend that has been continuing since May 18 and has remained at these levels. In case of an upward move, the closest resistance level will be $0.75, with $0.677 (weekly DEMA) being the support level. Short-term buy-sell strategy will be healthier due to the pullback movement experienced throughout the market. The positive news flow from the lawsuit in favor of Ripple may accelerate the price action upwards. 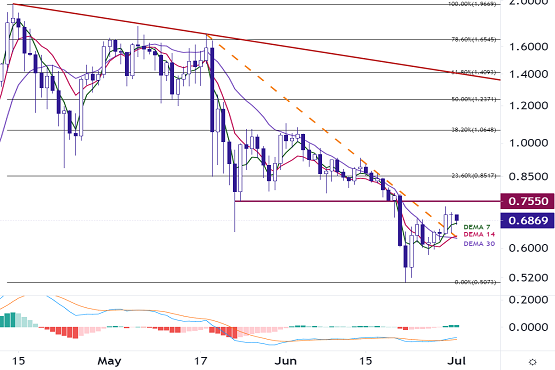 Litecoin depreciates by about 1.5 percent in the morning hours and is priced at $142. When we look at the chain data for Litecoin, the 7-day average of the number of active addresses continues to increase and there is a recovery in the number of new addresses. With the recovery in the market, we see an increase in the interest of investors in LTC.

When we look at LTC/USDT technically, it broke the descending channel that has existed since the peak level of May 10 at $ 133 with above-average trading volume. Climbing above the resistance zone in the $137-139 band, LTC retested this resistance zone this morning. The 7-Day DEMA cut the 14-day DEMA upwards and gave a buy signal, and with it, the upward movements gained momentum. Unless there is a 4-hour close below the $139.5 level, the $158.6 level, which is the Fibo'23.60 slice, is the next resistance level. The outlook for LTC is positive. 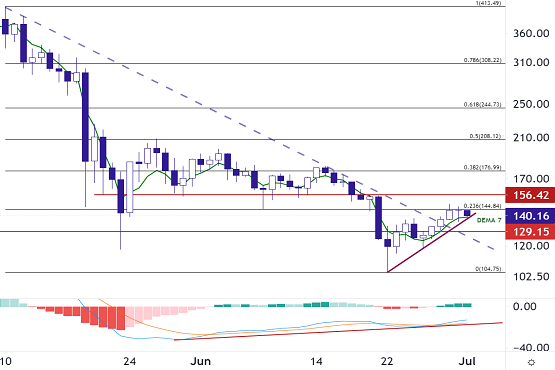 LINK, which fell by 3.95 percent in the morning hours, is priced at $ 18.76. In a report published by the World Economic Forum on June 30, the fact that Chainlink smart contracts open new ways to combat climate change and is cited as an example is positive for Chainlink, and we maintain our positive view for LINK in the long term.

When we consider the LINK/USDT parity technically, we see that LINK is priced just above the weekly DEMA. Although it tested the $19.70-20.00 band, LINK, which could not sustain above these levels, retested the downward trend that has been continuing since May and has broken upwards in the morning. If the $18.75 (weekly DEMA) levels are broken to the downside, the $17.31 monthly DEMA can be seen as a strong support. If the price breaks the Fibo'23.60 retracement level, which coincides with the $19.69 levels, it could accelerate price action towards the $23 levels. A short-term buy-sell strategy by following support and resistance levels may be a more appropriate strategy. 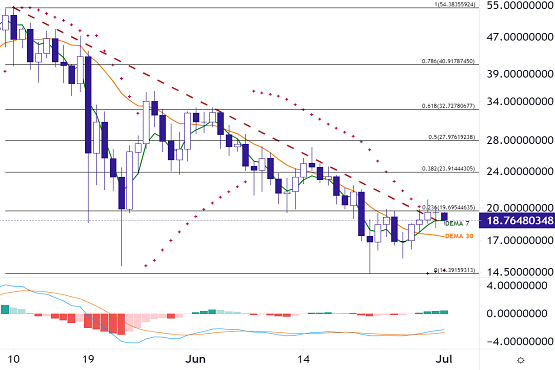 BAT is priced at 0.588 dollars, depreciating by about 4.15 percent this morning. When we examine BAT/USDT technically, BAT, which broke the descending trend that has existed since May 27 in the daily period, up from $ 0.582 levels, tested this descending trend yesterday and continued its upward movement with the support it found. Looking at the daily period, BAT, which broke the bollinger middle band up with yesterday's rise, is retesting the $ 0.589 level where the middle band is located this morning. MACD maintains buy signal in daily period. If BAT sustains above the bollinger middle band, we expect it to break the $0.6155 level, which is the Fibo'23.60 slice. 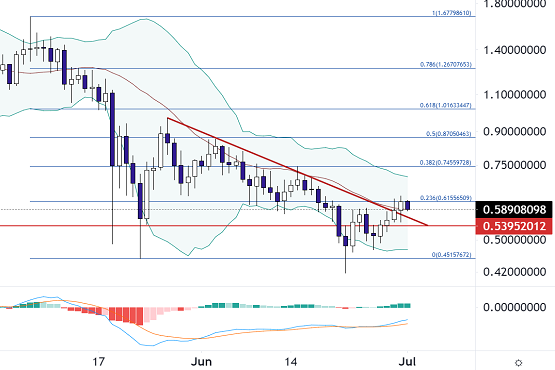